Download on the App Store
Get it on Google Play
Download
Download
Call us: +1-60-4343-8521
Mon-Fri 6:00 PM to 11:00 AM Pacific Time
International phone rates may be charged by your service provider
Filmora Video Editor
The Best Video Editor for Beginners to Edit Videos with Fun.
Try It Free Try It Free

The Yuneec Breeze 4K Drone is great for people who want to take beautiful aerial selfies anywhere, anytime. It's super portable, relatively affordable and with its 4K capability, it can take impressive Ultra HD and Full HD videos. As part of its selfie-inspired design, the Breeze comes with an app controller instead of a traditional radio controller. It can be activated from a smartphone and with a number of presets, it's considerably easier to operate than larger camera drones. What's more, videos and pictures can be downloaded and shared on social media within minutes. 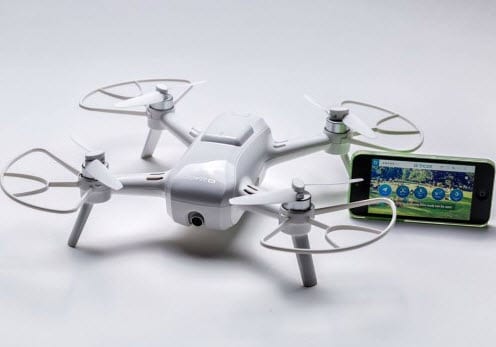 The Breeze scores major points for camera strength and overall portability. It's so well designed that in its compact plastic box, the Breeze can fit in a backpack or carryall tote. It comes with a 13MP camera that can take 4k – 4160 x 3120px UHD videos as well as still shots. And to top it off, the Breeze is very steady in the air and responds quite well to its app controller. On the downside, the Breeze has limited camera stabilization. This is because it uses digital stabilization instead of a gimbal. Furthermore, its digital stabilization does not work while it's in 4K mode. This gives the Breeze limited 4K capability. Some users may opt for Full HD and HD shots since digital stabilization is active for resolutions lower than 4K. Also, seasoned drone fliers may find its app controller somewhat deficient compared to a radio controller with joysticks.

The Yuneec Breeze is a quad drone built with brushless motors that power four foldable propellers. It's equipped with GPS and maintains a good orientation when outdoors. It also has an Indoor Positioning System that enables it to maintain orientation and level when it's used indoors. Its foldable propellers have a 5” diameter spin, and the Breeze comes with propeller guards to protect them from damage during indoor or outdoor use. The Breeze has impressive flight capability though it is clearly not designed for speed. It can rise to an altitude of over 250ft at a max climbing speed of 1m/s. Overall, the Breeze is a slow camera drone and in its defence, this can be ideal for video capture and well-composed photos.

The design of the Breeze is good enough for regular though careful use. It's made of plastic that can withstand minor bumps and crashes. Though the Breeze retails for under $500, it's still a significant expense. So, its overall durability is a very good thing. It's worth mentioning however, that the white body color of the Breeze can make it difficult to visually track its movement. Contrasting body color makes a drone stand out against the brightness of the sky. Due to its color, the Breeze may be difficult to spot when it's flown at max height in certain conditions. One very nice feature of the Breeze is that it has a failsafe that ensures it won't go missing when the signal is lost. A drone can lose signal if the controller is out of range or out of power. In these situations, the Breeze is designed to hover in place for one minute and return to its take-off point where it shuts itself down.

The Yuneec Breeze 4K Drone comes with two 1150mAh batteries that can power its flight for over 10 mins each. So, with the two batteries fully charged, a user can shoot videos and selfies for up to 20mins. While this isn't record-breaking time, it's still within the range for camera drones. The batteries can be recharged in 40-45 mins.

As mentioned above, the Breeze is a slow-flying camera drone. Its slow and steady movement is designed to support its main function as a selfie drone. It also comes with more than 5 flight presets. First, there's Pilot Mode which gives the user complete manual control of the Breeze. Then, there's the Selfie Mode which lets the user set height and distance for the perfect aerial selfie. The Orbit Mode lets the Breeze orbit around a user or object for a 360o shot. One interesting preset is Journey Mode which lets a user set a flight path that begins and ends at the same point. When activated, the Breeze follows the path and while keeping the user within the camera's frame, shoots a wide-angle video that slowly zooms in as it returns to its starting point. In ‘Follow Me' mode, the Breeze tracks user movement via GPS.

The Breeze is controlled through an app over a Wi-fi network. Its control range is over 100ft in distance and more than 200ft in altitude. However, as expected, the signal gets weaker the farther the drone moves from the controller. Most testers agree that the Wi-fi connection between the drone and the app is good. Besides, because of the drone's failsafe, there's little to fear if the signal is interrupted.

The app for the Breeze is available for both iOS and Android phones. The app shows virtual joysticks which can be used to move the drone around and orient the camera as needed. While it is as effective as can be expected for virtual joysticks, most testers agree the app offers significantly less precision than radio joysticks. On the upside, the controlling app makes it easy to see your footage from the drone. The camera's live feed is shown in the background while the virtual joysticks are active on the smartphone screen. This makes adjusting the drone's position or camera much easier.

The Yuneec Breeze 4K Drone is a good option for people who take selfies seriously. It has 16GB of inbuilt memory that can be accessed via a USB cable and with its app controller, users are only a few clicks from sharing their amazing shots with the world. All in all, the Breeze is a solid selfie drone that should be flown carefully since it lacks the ability to detect and avoid obstacles. Also, fans of the Breeze may find it worthwhile to invest in additional batteries to prolong usage time beyond its 20min limit.

Thank you for your comment. We will review it within few days.
You May Also Like
Samsung Galaxy S8 4K Smartphone Review

The Samsung galaxy S8 offers an incredible level of performance from one of the premier Samsung phones. In this article, we will show you all detailed review about Galaxy S8.