Everything You Need to Know About Pokemon Unite Builds in 2021

It must be noted that Pokemon Unite is Nintendo's unique take on MOBA, Multilayer Online Battle Arena. Like most of the highly prominent MOBAs out there, Pokemon Unite uses a gear system that can be customized. Its equipment has been said to cater to diverse, intriguing scenarios. Nevertheless, there is an interesting twist when it comes down to Pokemon Unite Builds. It becomes more intriguing as each of the available Pokemon now comes with unique statistics and abilities. This article is for those who want to understand how to make use of each Pokemon character. If you want your team to be successful while playing this game, it is best to know the Pokemon Unite Builds characters.

As lovers of Pokemon, some of the Pokemon Unite Builds characters that you will love include:

For those unaware, Lucario is regarded as an all-rounder. The reason is not far-fetched as he is capable of performing diverse roles. Most people refer to Lucario as an expert-level Pokemon. Nevertheless, Lucario shines vest as a combo attacker. As one of the Pokemon Unite Builds you will love, it turns out that Lucario concentrates more on developing a highly relentless combo. This combo is known to be able to eliminate the enemy Pokemon in a matter of seconds. More so, Lucario interestingly has incredibly high mobility statistics; thus, players can strike pretty fast and swiftly retreat from any form of danger. This ultimately means that you will need to practice hard to use Lucario correctly to defeat the enemy. For players out there, you can unlock meteor mash or quick attack early enough in the match.

Note: the best Moves for Lucario are the power-up Punch and Bone Rush. Also, it's held items are score shield, float stone, and muscle band.

It must be noted that Pikachu is grouped under the attackers. Since this Pokemon Unite build is an attacker, it debilitates and even finishes enemy Pokemon using electric attacks. With such a build, Pikachu swiftly stops and defeats its enemies without any hard challenge. Its moves are thunderbolt and electro ball. These moves are capable of stunning enemy Pokemon and leaving them vulnerable. Although Pikachu can deal great damage to its enemies, it, however, has low endurance.

Nevertheless, with the ideal Pokemon Unite Builds, Pikachu can be turned into an attacking machine. The first move that is advisable for players to make when using Pikachu is the thundershock. This move will damage and paralyze its opponents for a short while.

Note: Pikachu's held items are wise glasses, an energy amplifier, and of course, a shell bell. The shell bell helps in restoring the health of Pikachu anytime a move lands.

A great defender when it comes down to Pokemon Unite Builds is Crustle. It has been debated that Crustle may likely have the best kill potential amongst the defender Pokemon. Adding to its defense and increased HP, Crustle can use moves such as the X-scissor to ravage the enemies' forces. Crustle can also set some of the allies up for easy knockouts. As a highly effective defender, Crustle is capable of holding its own while taking a good beating. Though it does not do great in the ranged battles, it excels at supporting and tanking the teammates. The best time to make use of the X-scissor move is when you are at level six. With this move, Crustle will dash forward and damage the enemies as many times as possible, then shove them. Since Crustle is incapable of healing itself, it is best to use items such as the floating stone. The floating stone will help to give Crustle a boost. Such a move will push the enemies from their primary goal and can create space for the team.

Note: When playing with Crustle on the top path, it is advisable to pair it with an all-rounder or a good attacker.

If you never knew, the Zeraora is a speedster. The Zeraora pursues the enemies and eliminates them in seconds when it comes down to Pokemon Unite Builds. And, it functions to end long-time battles within moments. This Pokemon Unite build uses a wild charge and volt switch to reach its enemies in no time and eliminate them swiftly. Also, the held items of Zeraora enhance its swift though devastate assaults. If you need the best speedster Pokemon, then you should be making use of Zeraora. This build is capable of pouncing the players and throwing them off at the end of its move. Normally, the Zeraora retreats before any trouble begins, but its battle item Eject Button offers an alternative. When you use a basic attack before you reach the target, Zeraora can leap to the enemy close by instead.

Note: The Best moves it has are the wild charge and voltage switch. Also, it's held items are muscle band, float stone, and energy amplifier. 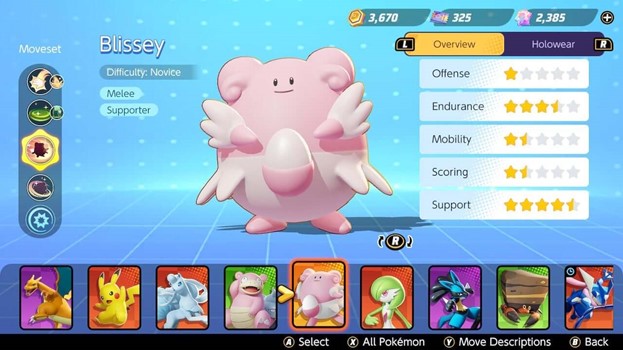 Although not much can be stated about Blissey's attack power, interestingly, this special supporter pretty much provides the best healing and ally buffs to be seen in the game. While you may prefer doing the damage as a player, some of the Pokemon Unite Builds focus on supporting your team during the match. This is where Blissey comes in. While you play, you will begin as Chansey, then transform or evolve into Blissey when you get to level four. Though this is not the strongest, you will need to learn more about the pound move to leave this stage swiftly. The pound move delivers lots of damage and reduces the movement speed of the enemies. When you are in level four, it is advisable to learn about the safeguard move. This move eliminates all status conditions from a player plus a chosen teammate.

Note: To escape danger within seconds, using the Eject Button is the ideal battle item for Blissey.

On a general note, we have provided you with some of the key moves and all you can expect from the latest Pokemon Unite Builds. With lots of practice, you will be capable of defeating enemy Pokemon with your teammates.

This article will introduce how to share screen on Discord step-by-step.