Download on the App Store
Get it on Google Play
Download
Download
Call us: +1-60-4343-8521
Mon-Fri 6:00 PM to 11:00 AM Pacific Time
International phone rates may be charged by your service provider
Filmora Scrn
Record your Twitch stream video online without effort
Try It Free Try It Free

How to Co-Stream on Mixer

Microsoft Mixer has been around for a little over two years, and it is already one of the best live streaming platforms on the Internet. A number of factors contribute to the quality of the service this platform provides and a co-streaming option is just one of many advantages Mixer's users have at their disposal. Let's have a look at how you can play your favorite games with your friends via the co-stream feature.

Co-Streaming on Mixer? What Exactly Does That Mean?

Some of the best games ever created are multiplayer games, and co-streaming just enables the players to play the same game within a single stream. The maximum number of players on one stream is limited to four, although the host of the stream decides how many players are going to participate. Viewers of the stream can see all feeds displayed in split screens, which is quite useful for multiplayer action games like Overwatch or Call of Duty.

During a co-stream you can chat with other viewers or players within one feed, so you don't have to jump between different streams in order to be able to interact with the audience or broadcasters. This option is currently available on Xbox and Windows 10, but the setup process might a little tricky if you are going through it for the first time.

Hosting a Co-Stream on Mixer [on PC and Xbox One]

There are not so many great options for co-streaming out there, and those that are available often have significant limitations. The Mixer's interface on both Xbox One and Windows 10 is intuitive, so you can easily invite new players to your stream or complete streaming session.

How to host a Co-Stream on Mixer.com

Next to the follower count on your channel, you'll be able to see a three dot icon, click on it and select the Start a Co-stream option. A setup page will appear on the screen and you can add new broadcasters by simply typing in their usernames in the search bar. In the Your Layout section you can choose between Grid, Live Bar, Camera Chooser and Mobile options, so just select the one you like the most and click on the Send Invites button.

How to Host a Co-Stream on Xbox One 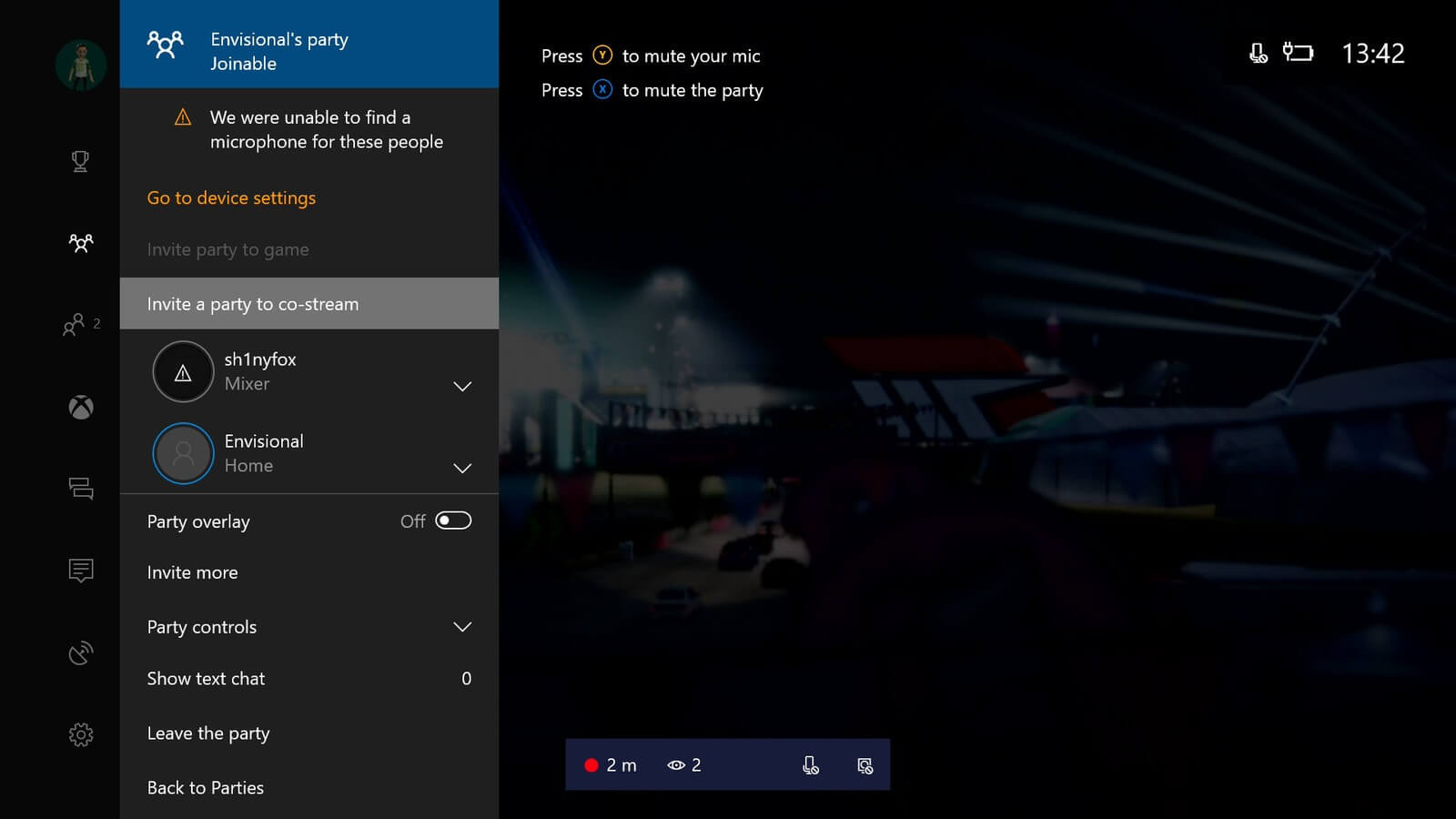 The Xbox One Live Party Chat System enables Xbox One owners to launch a new stream. Other broadcasters can accept their invitations from the web, although they must first join the Xbox Live Party so they can receive an invite.

In order to host a stream on Xbox One, you should first launch the game you want to play, and bring up the Xbox Guide menu by holding the Xbox button on the controller. Click on the Party tab and use the Xbox Live Party to search for the participants you'd like to invite to your co-stream.

Once the invitations are sent, you should head over to the Broadcast tab, that is located in the Xbox Guide menu. Click on the Co-stream your game option and just follow the instructions that appear on the screen to start a new stream. The participants will receive a notification that your new stream has started and they can accept the invitations you sent and join the co-stream.

How to Accept a Mixer Co-Streaming Invitation

After the host of a co-stream sends the invitations to the participants they will receive them moments later. Accepting an invitation on Xbox or Mixer.com is a straightforward process. If you want to access the co-stream from the Mixer's website, you should simply click on the bell-shaped Notifications icon. The invitation will be displayed in the drop-down menu, so you should just click on the check mark to accept the invite.

Accepting an invitation to join a co-stream on Xbox One requires you to just hold the Xbox button once the invitation appears on the screen. The Xbox Guide menu will pop up on the screen, and you can proceed to click on the Co-stream your game option. Follow the on-screen instruction to complete the setup and enjoy gaming with your friends.

If at any point during the broadcast you want to leave the co-stream you can do so by clicking on the three dots icon and selecting the Leave Co-stream option. Keep in mind that only the host can end the co-stream, while other participants can leave or be banned from the remainder of the stream.

The co-stream will be automatically saved on Mixer and displayed on the host's channel if the Keep recordings of my streams option is enabled. The Videos on Demand are only available for two weeks on Regular and Pro channels, while users that have the Partner status can store their co-streams on Mixer for 90 days.

Playing multiplayer games while streaming is incredibly fun, and it is becoming more popular. If you have a group of friends that love playing a multiplayer game together, then Mixer's co-streaming feature is a great choice for you. We'd love to hear which games you like to co-stream on Mixer, so leave a comment and let us know.

Streaming With Mixer - A Complete Guide

Video Mixer: How to Mix Multiple Videos on Mac/Windows