Terraria: How To Summon And Defeat The Queen Bee

In Terraria, there are around two dozen bosses that players may face and kill. Some of these encounters are mandatory if you want to go ahead, while others are optional but provide a tonne of tasty stuff if you succeed in defeating them.

One of these optional monsters, the Queen Bee, drops a slew of one-of-a-kind goods that can only be obtained via defeating her.

To beat this boss, you'll need to follow the instructions provided in this tutorial.

How To Summon The Queen Bee 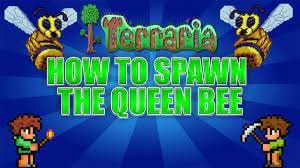 To discover the queen bee, you must search the mini-biomes of the Bee Hive. In the enormous habitat known as the Underground Jungle, a network of interconnecting caves, these creatures may be discovered.

As each seed determines the world's structure and layout, the Underground Jungle location will differ for every player.

A new Underground Jungle will be found in each universe.

The above-ground Jungle biome is a good place to seek it, although you may uncover it by chance while exploring your world. Once you've located it, you may begin your descent into the Underground Jungle.

Finding a Bee Hive is a question of chance and persistence at this stage. There are usually a couple of them in the neighborhood, but you'll have to go looking for them.

Find some Larva after you've found one. These seem to be small organisms encased in a honeycomb, and they are very vulnerable to damage.

Now that you've broken the Larva with a weapon and pickaxe, the queen bee terraria will spawn quickly after that.

How To Prepare For The Fight 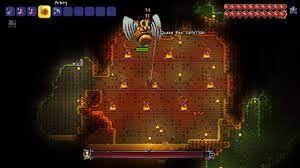 Having mastered the art of summoning the beast, it's time to get yourself ready.

The game's Queen Bee is a simple foe to take down. However, if this is the first time playing, be prepared for her to be a real pain.

First and foremost, you need to prepare the arena where you'll be taking on your next adversary. All obstructions, such as stray jutting bricks, should be eliminated from the Bee Hive, and the space should be as level as possible.

Assemble numerous levels of Wood Platforms and make sure there are enough torches positioned around the area to light the area quickly and easily at any given time.

Campfires or Heart Lanterns may be placed throughout the area to guarantee that the health regeneration boost is always available.

Players should also be warned that this boss may inflict the Poisoned debuff on them, slowly draining their health.

To counter this, you'll want to carry a lot of Healing Potions and a poison immunity attachment like the Bezoar, as queen bee terraria don't have any consumable antidotes.

It's best to use a weapon that does fire damage to arming yourself. However, as long as you're utilizing weapons of the highest quality, you should be alright.

I brought along the Artery for this encounter, which is my favourite weapon type. 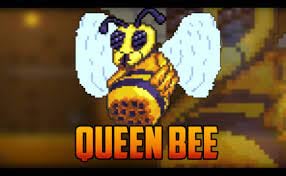 As soon as the queen bee terraria encounter begins, players must be alert and ready to deal with anything that comes their way.

At the beginning of a fight, the monster will use three quick charge strikes from the left or right side of the screen. This stage is optional since three perfectly timed leaps will be enough to clear these charges. By hopping up or down on the wooden platforms that were used to build the boss arena, players may easily evade these threats.

As a result, she will begin to float in the air and generate small Bee opponents to attack you. Even if you don't have a long-range sword, you should use this chance to kill as many as you can before the queen bee terraria arrive.

Last but not least, she will fly around the arena & swarm you with deadly stingers she fires from a distance. Remember to utilize all the health potions you brought along if they strike you.

As long as the players memorize the boss's motions and adjust to them, they'll have no problem defeating her.

If you're hit, keep recovering and attempt to remain near a Campfire or a Heart Lantern so you can replenish your health.

It shouldn't take long until you're able to deplete her life bar to zero.

The queen bee terraria may be destroyed comparatively easily if the proper preparation and accessories are in place. To succeed, you must kill the Bee minions as they arrive, evade her attacks, use regeneration boosts to offset the poison, and maintain pressure on her at all times.

Players may contemplate avoiding this encounter completely. However, her drops contain a wide range of valuable equipment building blocks. One of the numerous weapons she drops will make many of the subsequent boss battles much simpler.

Defeating this monster and mastering the technique is in the player's best interest. However, it's important to grow familiar with fighting her to be swiftly bred for strong resources.