How to Make a Cyberpunk Video on Mac?

Cyberpunk style is all the rage these days, mostly because of the latest video game Cyberpunk 2077 which has been launched on both popular consoles, Xbox and PlayStation. When we talk about cyberpunk, we talk about glamor, power, and technological modification in a futuristic setting that is often characterized by sharp, contrasting, and sometimes even psychedelic colors as well as effects. It gives a distinct touch to the media and is quite easily recognizable.

This is one of the reasons why many YouTubers and other video editors are now trying to create and edit Cyberpunk videos on Mac.

What is Cyberpunk Style?

Cyberpunk itself is basically a genre of science fiction that features dystopian future. It demonstrates the advancement of material technology but an evident decline in the social fabric. Some of the key characteristics that identify Cyberpunk style are as follows:

One of the key components of a cyberpunk-style video or any media is the involvement of high-end technology that often coincides with the deterioration of societal ethics and morality. The technology often includes biological modifications to acquire an enhanced skillset such as artificial intelligence and cybernetics. 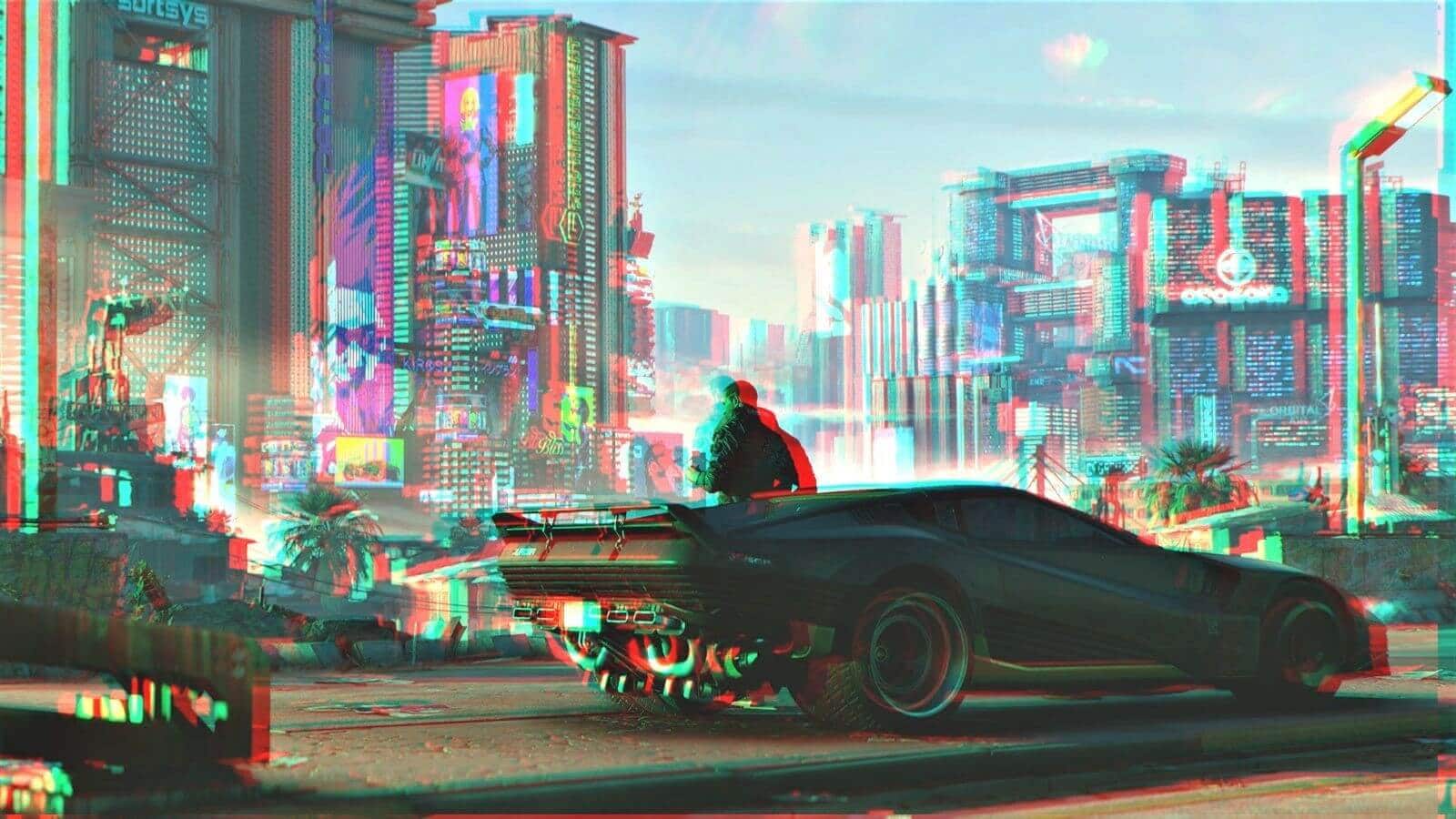 Cyberpunk is often set in the near future, particularly the twenty-first century. It portrays a society that has gone down some sort of a radical change or breakdown which humans are attempting to compensate with material scientific achievements.

The style often relies on high contrast and radiant and bright colors to bring out the futuristic high-tech aesthetic. Some also rely on visuals that are quite out there such as psychedelic and motion blur effects. 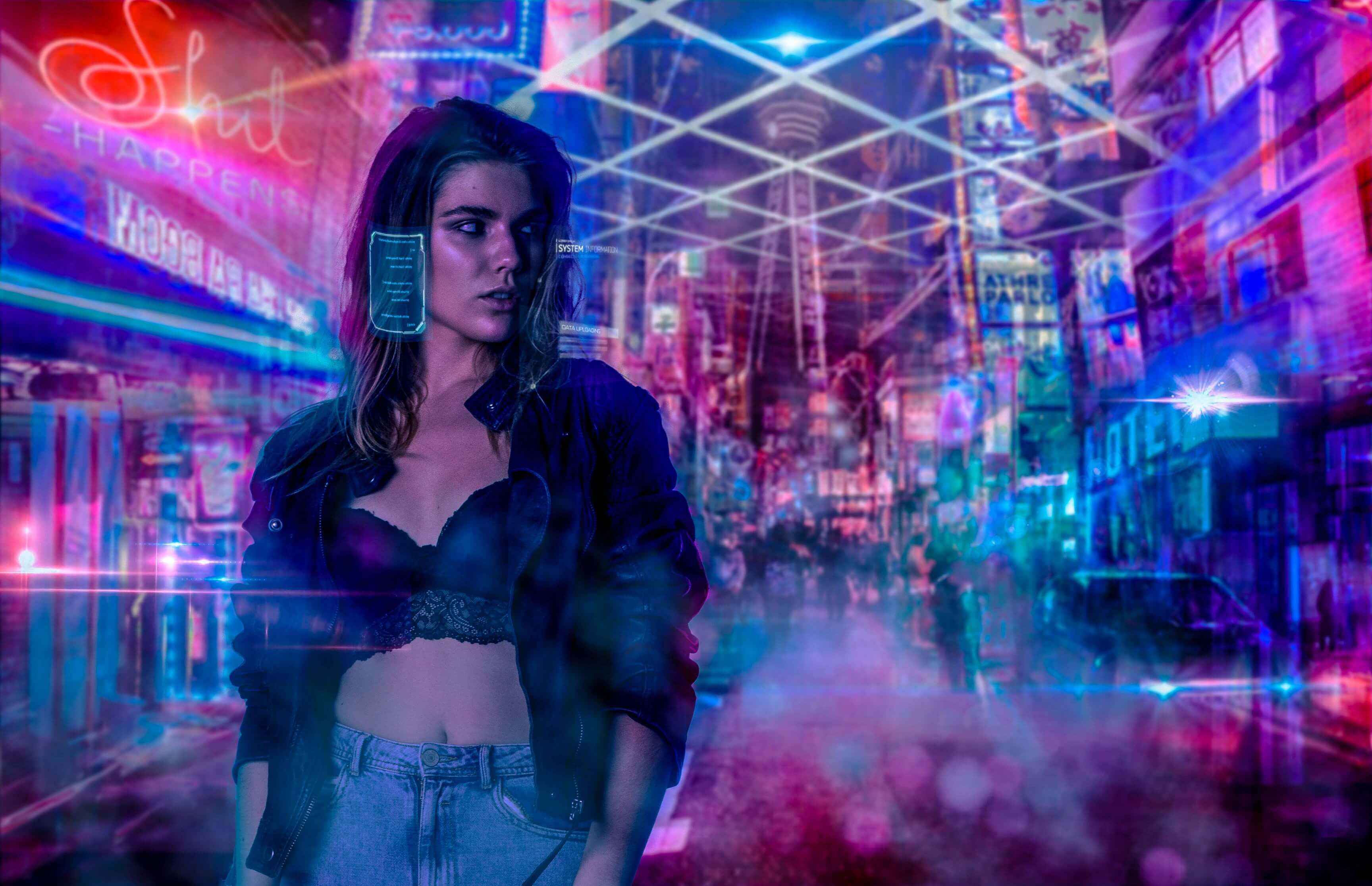 If you are looking to edit your videos in Cyberpunk style on your Mac, you have to be careful in terms of selecting the right editing software. It should be kept in mind that Cyberpunk effects are not easy to pull off and while the relevant features are available in many software applications, it is often quite challenging to make your Cyberpunk video Mac look seamless and professional.

Since there are complex visuals and features involved, many beginners and intermedia video editors find it difficult to add a Cyberpunk look to their videos on Mac. That's where Filmora X for Mac can help you with its user-friendly Cyberpunk theme, visuals, and effects. There are a number of features in Filmora X that you can use to create your Cyberpunk video on Mac.

The best feature you will get with Filmora X for Mac is a diverse variety of Cyberpunk style filters and stickers. You can use any of these effects by importing and dragging your video to the timeline. Your Cyberpunk video Mac filters will allow you to edit your video in the style you are looking for while stickers will add more flair to the final cut.

You can also rely on other effects such as the glitch effect to create Cyberpunk style video on your own. Filmora X for Mac is loaded with a wide assortment of latest visual effects as well as features that will help you to get the desired result. Now your audience will be able to enjoy your Cyberpunk videos every week.

All you need to do is import your video into the software and drop it on the timeline. From here on, you can start using the green screen feature to ensure that the background matches the Cyberpunk style aesthetic in a seamless manner.

Another important feature offered by Filmora X that can help you create an authentic Cyberpunk style video is motion tracking. It allows you to identify and track characters along with the cyber elements so you can add visual effects such as motion blur and other visuals to make your video more engaging and appealing. Motion tracking in Filmora X is easy to use and anyone, from an amateur to a professional video editor, can use the feature.

Motion tracking feature can be accessed from the primary interface of Filmora X. You can also use it to add Filmora X's Cyberpunk stickers and other presets. With complete control on the green screen as well as motion tracking, you will be in a much better position to edit your Cyberpunk video Mac in style.

When it comes to Cyberpunk video Mac features, you will find many software programs and apps on the market but they aren't as intuitive and easy to use. If you are just a beginner or someone who doesn't want access to a lot of advanced and professional features, then Filmora X is a perfect video editing companion for you, especially if you are looking to edit your videos in Cyberpunk style. Filmora X isn't only user-friendly and affordable, it offers a wide range of features necessary to create a Cyberpunk video on Mac.

From green screen and Chroma key to Cyberpunk stickers and motion tracking, Filmora X brings you everything you need to make an authentic Cyberpunk video that will delight your fans.

Cyberpunk Meaning – What this Word Stands For?

How to Choose the Light for Green Screen

How to Find Funny GIFs on Mac