Why This Article About Mp3 Converter Windows Deserves to Read?

Why This Article About Mp3 Converter Windows Deserves to Read?

We've got you there! In this article, not only have we compiled a list of the best FREE MP3 converters for Windows 10/11.

We've also included a list of the best MP3 editor Windows & Mac, and a list for the best MP3 player Windows & Mac! There's even a quick tutorial in the end that can help you trim MP3 (Windows) files that you've converted so that you can more cleanly include it in your own project.

As promised, we start this off with the best audio converter (Windows 10/11) tools. We've decided to go very simple with this list, providing a brief description of all of the FREE MP3 Converters (Windows), a URL that will lead you to the website where you can get the converter, and an image that should show you how the converter's interface looks like.

EaseUs MobiMover is an audio converter for Windows 10 and 11 that you can use in order to easily convert videos (in various formats) into MP3 (as is shown in the image below. It's a FREEmium software though — which means that it's use is limited until you purchase the paid version of the software. 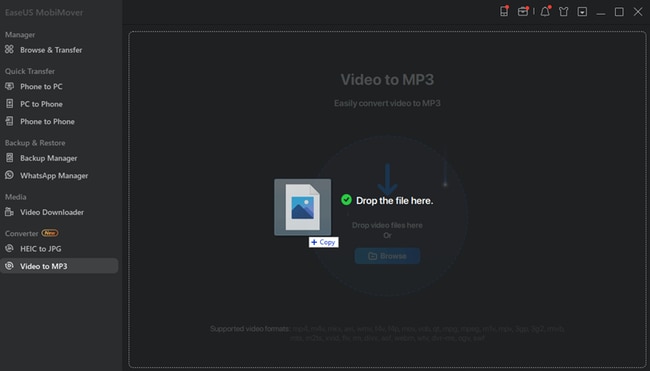 Freemake Video Converter is the first 100% FREE MP3 converter for Windows 10 on this list! They keep the software updated from donations, so you can choose how much money you can spare for using the service! It's a very simple software besides (as is shown in the image below). It does feature some video editing tools, but its main function is conversion (which includes video-to-audio conversion!) 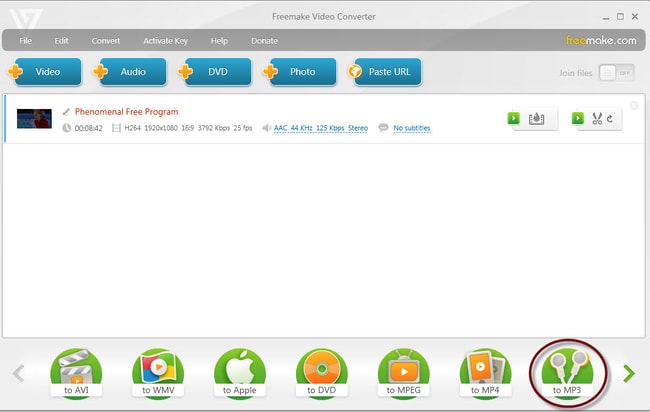 Much like Freemake, our next MP3 converter for Windows 10 and 11, called VSDC, is completely FREE — as they run primarily on donations. That does mean that it's not the most advanced program though — evident from the rather old-school interface (shown in the image below). But, regardless of the lack of abundance in tools, it should function just fine as an audio-video-converter for Windows 10 (and vice versa.) 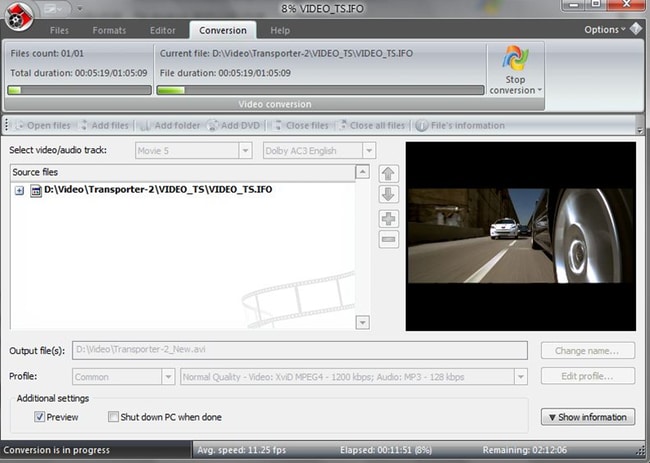 With Convertio.co, we break the mold a bit! This is not a software, but it does still work for Windows users — as it requires only that you have a working browser from which you can access the website (URL linked below!) As you can see from the image, it works much like most online MP3 converters — you upload a file from your desktop, wait for it to finish converting, and then download it! 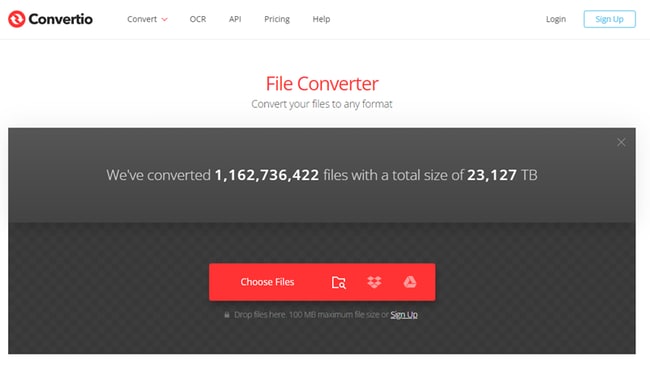 Free Convert is another online MP3 convert for Windows 10 users that would prefer not to download or install software. And, just like Covertio, it works by uploading the files you want to convert from your computer, waiting for the converters tool to finish converting it, and then downloading the finished product. It is, of course, FREE — but, similar to the first tool on this list, if you want to unlock some of its features, you'll have to pay for the premium version. 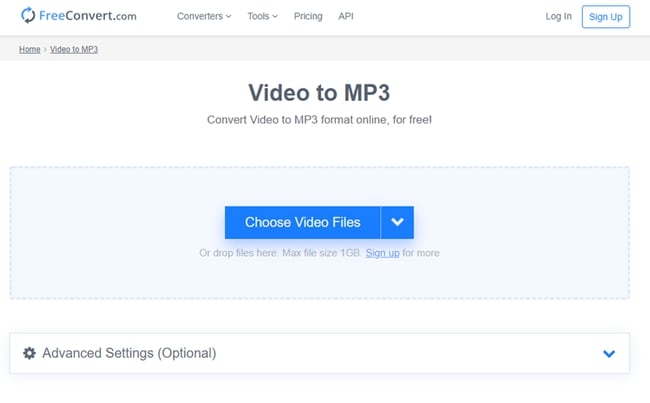 With DVDVideoSoft, we're back to an audio-video converter for Windows 10 that you have to download and install to work! It's a FREEmium software too. That means that you'll have to pay in order to unlock certain features. But, it works as a solid converter even without that.

For this next section, we turn our attention to a couple of MP3 editors (Windows 10 and Mac compatible.) This list will be a little more detailed than the first, since there are many differences between the tools that we'll be introducing (both FREE and PAID), but it should give you a clear idea on which would work best for you.

The first on our list is the MP3 editor Windows 10 and Mac compatible, Wondershare Filmora Video Editor This is an advanced video editing software that you can use in order to work on just about any digital project — including, of course, editing your MP3 audio files.

● Advanced tools might make it harder to get used to 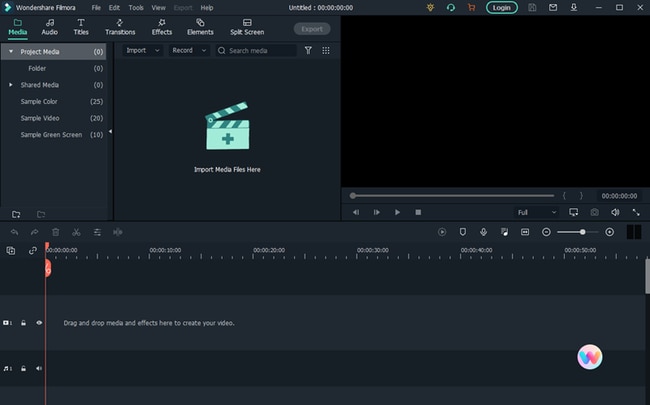 Audacity is an MP3 editor (Windows 10, Max, and Linux compatible!) The difference between this tool and our first pick, Filmora Pro, is that Audacity is an open-source software — this means that it is free to use, but it also means that it might not be the most reliable as it is not updated quite as often.

● Not updated as often

● Difficult to use for beginners 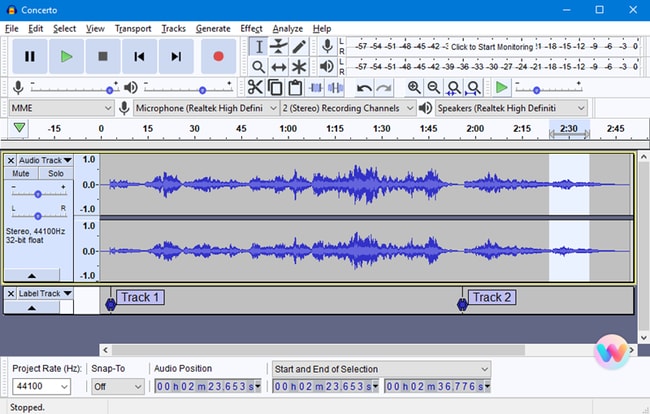 Next up is Ashampoo's Music Studio 8! Here's another freemium software that you can try for free — just to make sure it's the tool that you're looking for, but you'll have to pay a price to use in its entirety! As you can see from the interface (shown in the image below) though, it's quite the effective MP3 cutter for Windows 10 (among other things). So, if that's what you're looking for, then it's a good choice to consider.

● Available only for Windows! 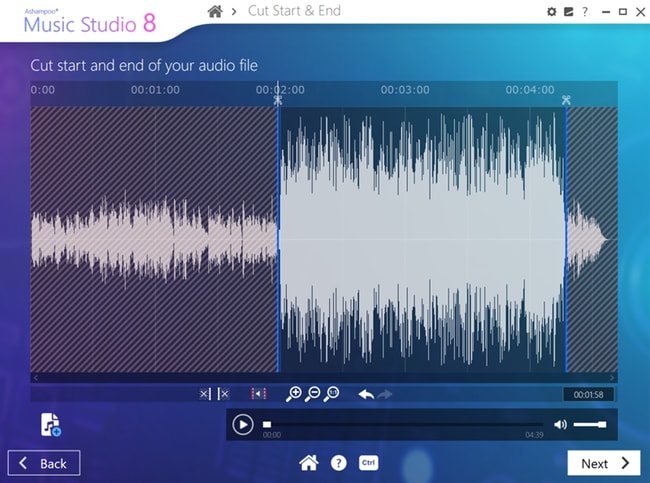 As far as audio-editing goes, you're probably going to have a difficult time finding one that is as specialized as Ocenaudio. As you can probably guess from the name, it is, primarily, an audio editing tool. Making it a good choice if that's all you're looking for in a software, as it certainly keeps things simpler.

● Open-source, not updated as often 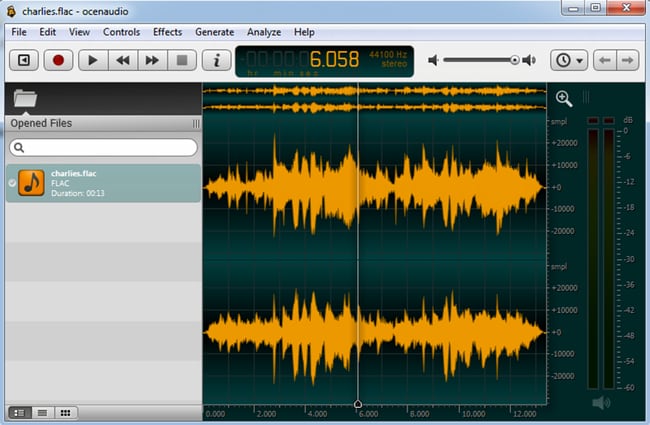 Our next pick is another open-source, MP3 editor for Windows 10. It's called Acoustica. And, as you can see from the image shared below, it's a fairly advanced audio editing tool. You should note, however, that the newer versions of this product are PAID (only older models are free), which is the topic of our discussion today.

● Older version of the software

● Available only for Windows 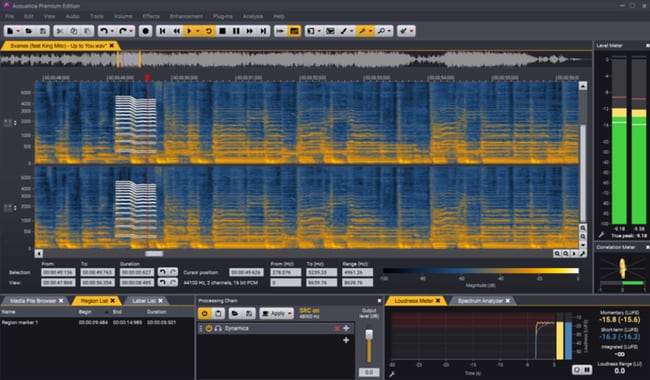 Finally, we finish things off with Audiotool, it's certainly not your traditional audio editor (as is evident from the image shown below). But, the funky interface doesn't mean that it won't work for you! You never know, it might be exactly the kind that helps you zoom through your projects more quickly. 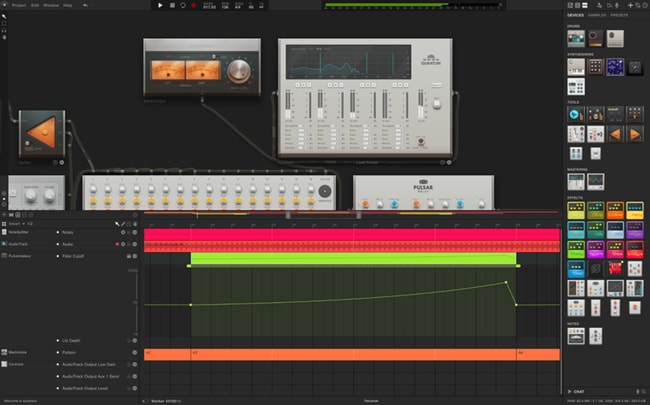 Despite appearances, iTunes actually makes for a great MP3 player for Windows 10 users. After all, it's interface is clean and it is regularly updated. So, you never have to deal with bugs! (And just in case you weren't aware, you can add your own original audio to your iTunes library! So, it isn't like you have to purchase media from the iTunes store just to listen to it.) 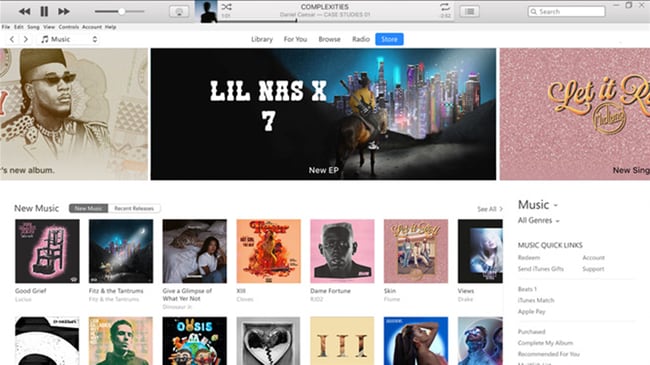 Groove Music is a local Mp3 player for Windows 10 that you can download from the Microsoft App Store. It functions much like iTunes — in that you can add original music or audio to the app library (as well as purchase audio from the store — if that's what you want.) 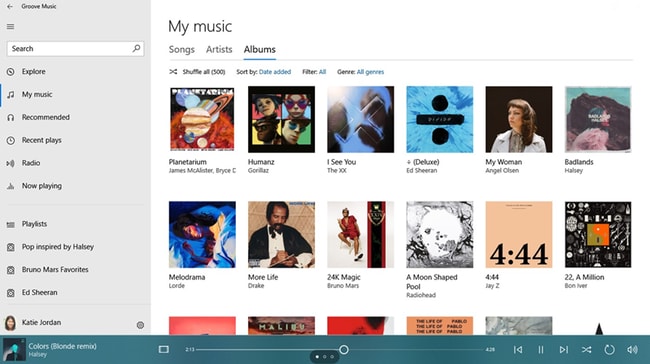 Our next pick, Macgo, is not strictly an MP3 player for Windows 10, but it can work for that purpose if that's all you need it for. As a media player though, it does function as a video player as well. And, like our previous picks, it's FREE so you don't have to worry about paying in order to use it. 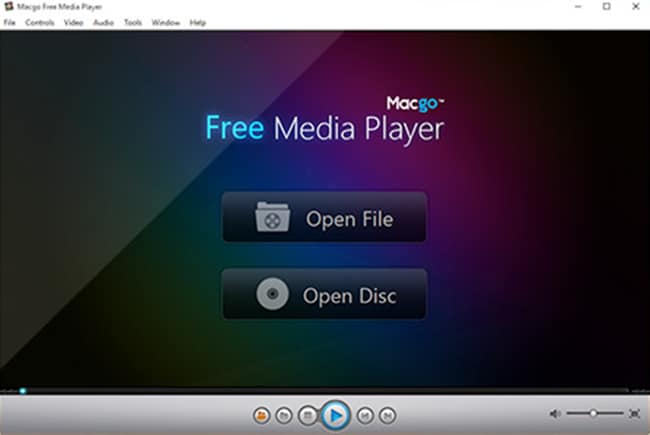 Again, our next pick is more of a general media player than strictly a MP3 Player for Windows 10 users, but it works just as well if all you're looking for is to occasionally play the audio that you've converted or trimmed! 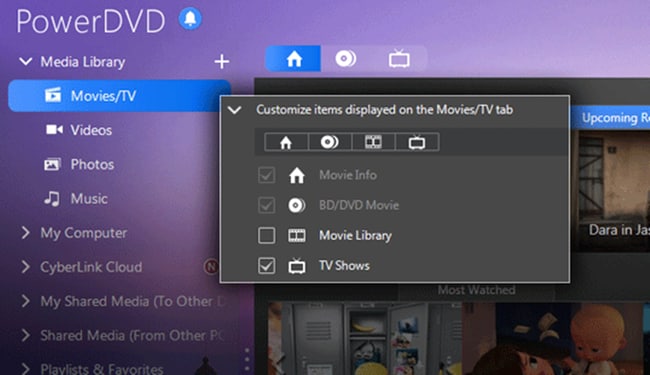 We're back to strictly MP3 players for Windows with Musicbee! The best part of this app is, undoubtedly, the fact that it has several view options. So, if you want, you have your audio playing from a mini audio player (rather than the full interface — as is shown below). It's also useful for organizing your media collection!

For this next part, we're going to go over how you might go about trimming your converted audio with an MP3 cutter for Windows. (Note, a lot of the audio editors that we introduced in Part 2 of this article should be capable of this! And, they all work in much the same way.)

First, launch the MP3 cutter for Windows 10 that you downloaded.

For this example, we'll be using Joyoshare Media Cutter. And, the way to start is to select the "Open" button, which will prompt you to choose which audio you want to cut. 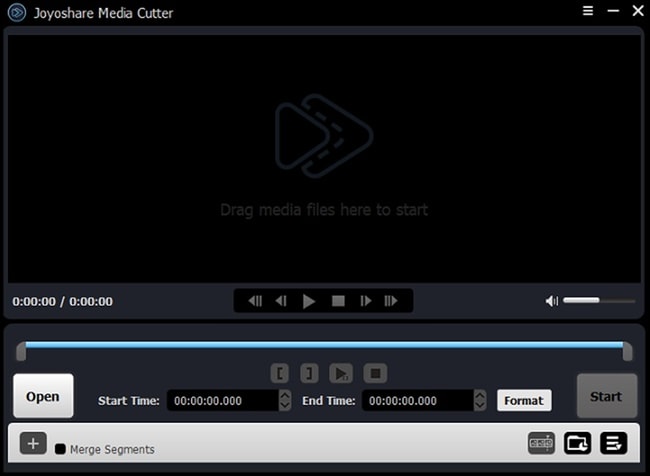 Next, select the output format that you want your audio to be exported in. (Most MP3 cutters for Windows 10 offers a variety for you to choose from). 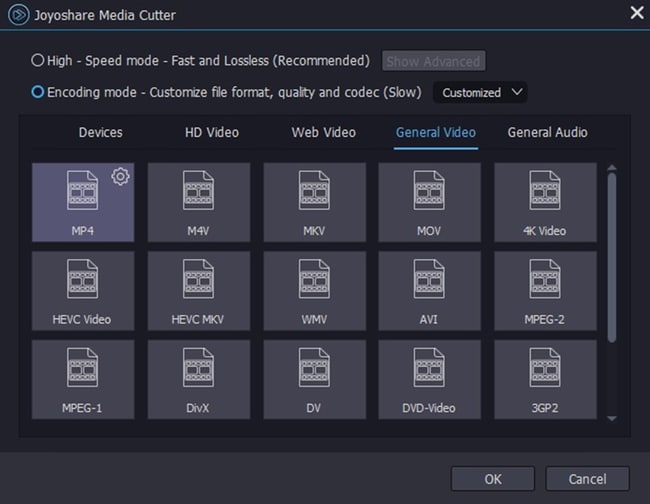 Joyoshare has two methods of trimming available. The first is the select and trim mode, which is shown in the image below! For this, you use the sliders provider to select which portion of the audio you want to keep! 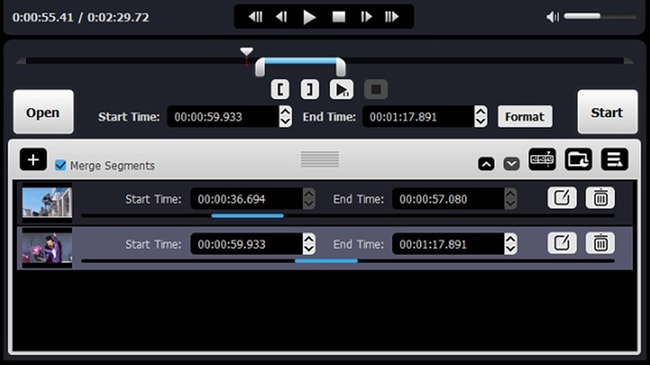 If you want a cleaner trim, you click the "Edit" icon beside the audio that you want to trim until you are moved to the encoder window (shown in the image below). This will allow you to pinpoint the best place to cut your audio! 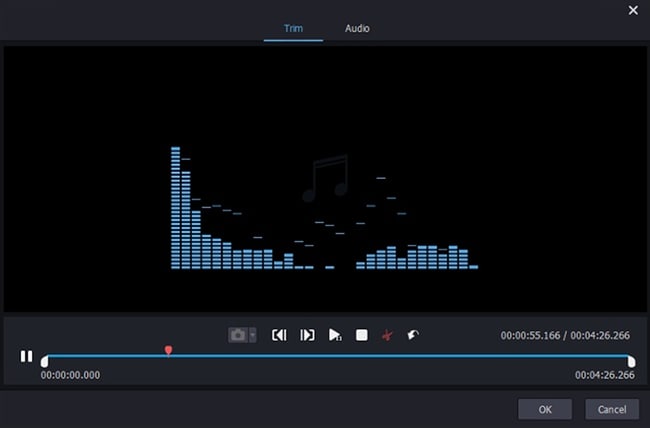 Once you're done trimming, remember to save!

With Joyoshare, the method of doing this is to select the "Start" button, which will prompt the trimmer to begin cutting the audio. 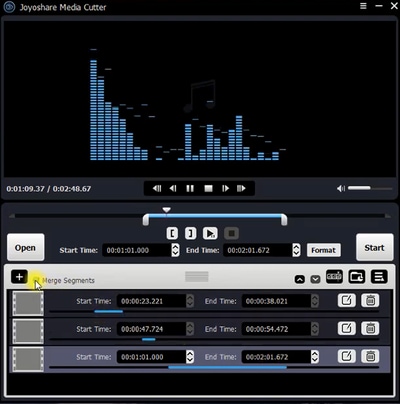 ● Of course, if you want your finished project to sound clean, you'll probably need a functional audio editor for that! And, for this matter, we recommend advanced video editing software like Filmora Pro.

● Just in case you want to review what your converted audio sounds like, consider one of the audio players that are available for Windows and Mac!

● If you find that your audio needs some trimming, a quick trim with an audio cutter should do the trick. It's very simple to do!