Get More Clicks Without Thumbnail Clickbait

What makes people decide to subscribe to you? Watching your videos and discovering that you have answers they need or content that entertains them, or that you’re generally awesome. However, there’s a lot that goes into getting viewers to watch your videos in the first place and one major factor in getting those clicks is your thumbnails.

A while back we did a list of tips for more clickable thumbnails. You can check the ultimate YouTube thumbnail guide, or keep reading to see what’s working for some top-ranked videos.

I’ve done several YouTube searches for topics in a variety of genres in order to look at the thumbnails of the highest 3 performing videos and analyze what about those thumbnails were contributing to their videos’ success.

The thumbnails I’ll talk about today came from these four YouTube searches:

Now, let’s take a look at the highest-ranking thumbnails: 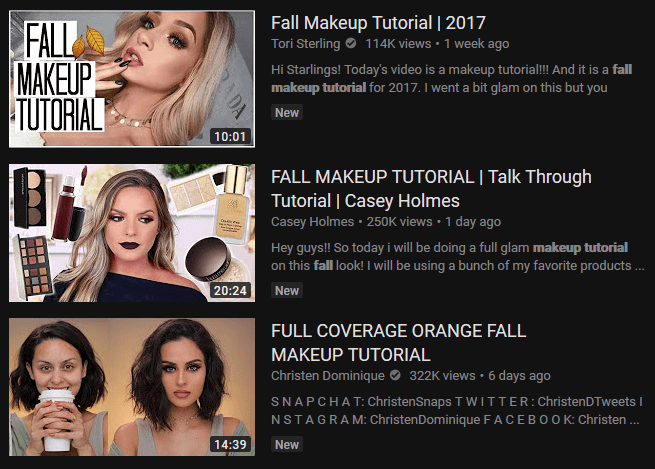 The first thing you’ll notice is that all of these thumbnails include the face of the makeup artist. Faces are one of the best things you can include in your thumbnail regardless of your genre – people are attracted to eye contact and that makes us more likely to click on images that include faces – and they are especially important if the content of your video focuses on your face.

I scrolled for a long time in the results and there were no decently ranked videos that did not include either a face or a close up of someone’s eyes in the thumbnail. That tells me that creating a video in this genre and making the thumbnail a close-up of some makeup sitting on a table, or anything else which failed to showcase a face, would be a mistake.

Only one of these thumbnails includes text, and it is in the highest spot. Scrolling down in the results there were other fairly high ranked videos that did use text, but it was more common not to. From this, we can deduce that text is not a necessity for thumbnails targeting this topic, but it can be helpful if used well. It might even give you an edge over some of the videos that aren’t using text.

Tori Sterling’s number 1 ranked video for this search is using text perfectly. It is large, it does not obscure her face, she only uses 3 words (using too many gets crowded), and the font she has chosen is simple and clean looking. You can read her message at a glance without having to ‘try’ to read it.

All of these thumbnails, and most of the extended results, use warm, natural, ‘fall’ colors (as do most of the extended results). That makes sense since that’s probably what viewers want to see in a fall makeup tutorial. However, if you can find a way to sneak in a ‘pop’ of something different without straying too far from the kinds of colors viewers are looking for it could help your video to stand out and attract more clicks.

The top two thumbnails are both doing this. Casey Holmes used more black than the others, and there’s even a subtle pop of a bright pink due to her eye shadow and on the makeup palette graphic.

Sterling’s thumbnail has a pop of orange because of the fall leaf graphic and, while orange is very much a ‘fall color’, most of the results used a lot more browns than actual oranges. Your eye is naturally drawn to those leaves because they are the brightest thing on the page, but the thumbnail still looks like it belongs in these search results. 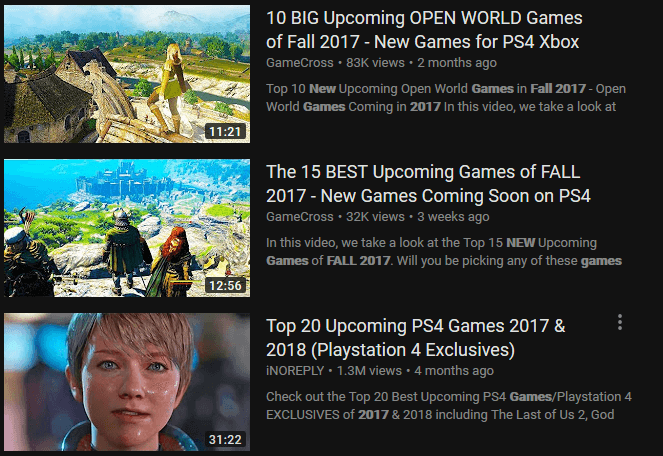 One of the highest-ranked videos for this search, the iNOREPLY result, is making use of the automatic appeal of faces the same way lifestyle or vlog videos do. Faces are very click-able, and that’s true even if they’re CGI or cartoon faces.

As I scrolled down, I noticed that while some other thumbnails also used faces, the style of the two highest-ranked thumbnails was far more popular. Whole bodies of people, usually from behind, are included and there is an emphasis on scenery. There were, however, almost always people in the thumbnails even if their faces weren’t visible. That suggests to me that the presence of a human/human-ish figure is still considered click-able in this genre.

None of these results include text and, even when I scrolled lower, there were hardly any results that included it. In most cases there were intricate video game environments being displayed in the thumbnails and adding text would have not only obscured that but combined with it to make the whole thumbnail too busy.

If you have a lot of texture in your image already, as is the case with the first two results here, it is probably a good move to skip the text.

I do not believe it is a mistake that the first two thumbnails use bright screenshots with lots of blues and greens. It creates a feeling of freshness and optimism, which is the perfect tone to set for looking forwards to something new.

We’ve got a new eBook out!

Click to download the FREE eBook ‘The Ultimate Guide to Growing on YouTube’. It’s got strategies that have really worked for other YouTubers, boiled down to simple action steps. 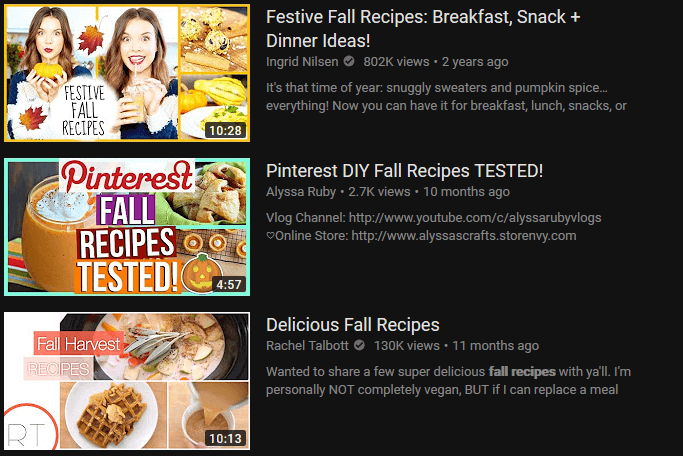 Only one of these videos uses a face in its thumbnail, and it’s a video from Ingrid Nilsen whose channel is about lifestyle more so than cooking specifically. Appearing in her thumbnails is part of her brand, so it would be odd if she didn’t regardless of what the norm is for food videos.

Choosing to be present in the thumbnail – offering up the promise of a personality – could be giving Ingrid an edge in this search. Although, if you had a dedicated cooking channel, it would also make sense to want the food to showcased more so than you. This is a situation where it would come down to whether you are targeting an audience that is primarily interested in cooking, or primarily interested in lifestyle videos.

All of these thumbnails use text, and in the first two, this text is large and clear enough to read. The size and font of the text in the first video actually wouldn’t work, except that Ingrid has created a white background for it which helps it to stand out more.

The third result, despite performing well, actually isn’t using text as well as it could be. You can hardly read the word ‘Recipes’ because it has been done in mostly white on a white background.

Much like with the “fall makeup tutorial” search, the results for the fall recipes search use a lot of warm browns, oranges, yellows, and natural-feeling tones. The second result here – the Alyssa Ruby video – is very cleverly standing out by using a bright teal border. Scrolling down in the results, nobody else has done anything similar. Alyssa is ‘fitting in’ in all the ways she needs to for her video to be recognized as a fall recipe video while still standing out just by using that one color that nobody else is using. 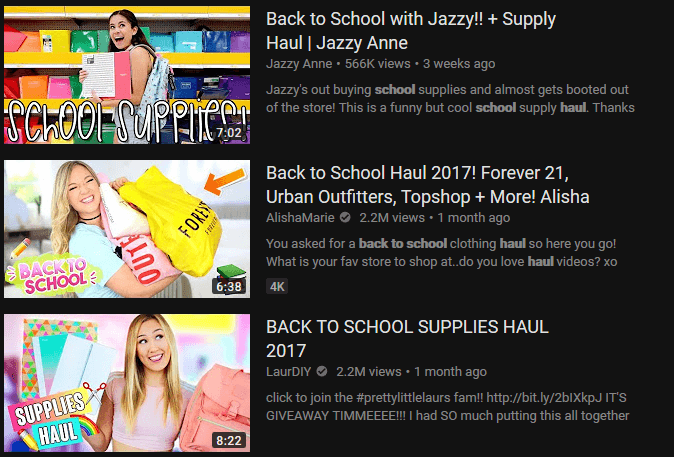 Faces wearing huge smiles were very much the norm for this search, even past these three results. I almost wanted a thumbnail of someone wearing black and glaring to come up, just for the sake of seeing something different, but would that have actually been a good choice on the part of the video creator?

Considering your audience and the tone they want is important, and people who are angry about buying school supplies or a back to school wardrobe probably aren’t searching for “back to school haul” on YouTube. The smiles in these thumbnails are necessary and, if you’re looking for something you could change to stand out, this probably isn’t it.

All of the text in these thumbnails is simple; 2 or 3 words and easy to read. You should never need more than that to state the main topic of your video. Less is always more when it comes to text on a thumbnail.

EVERYTHING IS SO BRIGHT. Pink, baby blue, yellow, and RAINBOW were the norm for this search. In fact, thumbnails in this search look so similar that I actually thought the second and third thumbnails were of the same person with straight hair vs. curly hair when I first saw them before I read the channel names.

…At the same time, the Rainbow Unicorn Back to School Spectacular that most of these channels are advertising is clearly working for them. Remember that it’s a balance between being similar enough to look related, and different enough to stand out.

Besides creating a YouTube thumbnail with some photo thumbnail makers, you can also create a thumbnail with effects and templates in Wondershare Filmora9 video editor and then save it as a snapshot. Below is a brief video tutorial from ComteQ, which shows you in detail how to make a thumbnail for YouTube videos using Filmora9.

Best 10 Emoji Apps to Emoji Yourself-Make an Emoji of Yourself!