Whether your favourite Cartoon character Bugs-bunny comes from space or beyond your imagination, whether nostalgic Tom and Jerry are young, eternal or old, knowing the process to draw cute, funny, adorable cartoon-characters is a kind of special feeling always & looks essential incase you desire to become quality professional artist. Cartoon Characters are more challenging to draw while taking care of their weird postures, body-parts like legs, hands.Cartoons characters are the easiest ones to draw as it involved simplistic shapes and doesn’t needed a hard core practice.

In this article, you will be able to get access to drawing amazing characters with a wide range of characters featuring ordinary people, fictional-characters, creatures, monsters, or your favourite cute little ones in easy way. 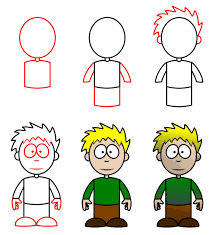 One of the most basic and interesting shape for any cartoon sketch is circle. All you need is to clearly define basic proportion of your character and that can be happened with desired character's head. Later on you can trace its charm with face axis.

In order to make eyes, one needs to take care of oval shape sketch with slight tilt to side at top position. You have to note that, it is always important to leave good gap between each one of them of approximately similar size as the eye.

There is nothing to fear when it comes to draw cartoon hair. You don’t need stylist or a fashion designer in order to make them look perfect. With ideal haircut and matching personality of the desired character, you can do this thing pretty awesome. Hair can represent age, conservatism, rebellion etc. and comes in incredible features.

One of the most accurate & a faster way to do that is by taking references from a fashion magazine, Google Search or cartoon magazine. Once you are done with your findings of ideal styling, you can later on simplify your hair version.

Sometimes older characters can be pretty easy to draw as it all begins with their eyes, facial expressions, addition of wrinkles, eyebrows, eye pupils etc. You just need to expand eyebrow a little bit. The older characters have thicker-eyebrows, large forehead space etc.

It’s simple, just focus around delicacy in facial structures, like:-

● Long hair or depends on your choice

That's it. Also, you need to give comfort feeling to your character, the more you draw the more realistic it will look.

If you want to showcase your talent to this world without any extravagant apps or software then FIlmora is the best choice that you can consider for drawing some amazing cartoon at your own. This app has its own fun loving designing features and you can add varieties of stickers, images and text to your drawings.

What exactly Filmora can do your drawings:

● This will let you access video editing and image editing features also, to give your cartoon a life. 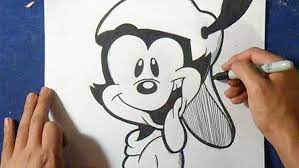 Now, it’s time to move on with thinking about which cartoon characters to put in your papers with emotions, facial expressions and other features. We are now moving towards the process to include more and more emotions to the same.

Let’s begin drawing 8 amazing characters that are not only famous but also living in heart of children.

Who doesn’t live Bugs Bunny? Well, it is among the list of most iconic characters that you can imagine and it is certainly the most funnies and interesting character to draw. Right from drawing its big feet to attractive teeth just made for cutting carrots, a lot of things are included in Bugs bunny.

● Draw a circle & a "noodle" shaped object as per the imagination. The circle will be its head & pear shape will be its body. You need to make bottom pear fatter as compared to upper portion and also upper-part has to overlap head circle only a little.

● Include perspective guidelines at around the head as this thing can correctly position eyes as well as nose of your bunny.

● You need to draw the eyes at Horizontal guideline and nose where guidelines crosses.

● Draw cheeks and include ears, arms. At the time of drawing arms, you have to give natural curve to arms.

● The arm curves together with the legs-curves might look little difficult, therefore you have to make use of your pencil tenderly without pushing it harder.

Your cartoon Bugs-Bunny is now ready.

One of the most famous cartoon character of Disney Popeye also appeared on the cinema screens and this belongs to the list of famous classic cartoon-characters.

● It’s a comic character so give it a grotesque-look

● Slightly include other body-parts with shapes like ellipses, noodles in the form of contours.

● Draw one centre-line across the head with well-balanced facial features.

● Draw nose, mouth, ears for the face to form.

As a next door friend and neighbor of Flintstone-house, Barney is kind of a quirky character. This contains features like ears & big feet in the form of angles.

Here is an amazing video tutorial for your Barnet Rubble Cartoon Character:-

This cartoon character has wealthy features with fun-loving designs to draw in the form of top-hat, a-cane, as well as few small reading glasses. When it comes to drawing this cartoon characters sketch you need to come up with funny and slightly challenging features.

05Drawing a Ninja For Amazing Action

Work on the head first with nice & precise circle in order to illustrate head portion. Inside this, you can add two more tiny circles for eyes. Once you are done with the eyes, you need to add large & thin rectangle that represents headband. At one portion of headband draw tiny circle with small triangles in numbers 2.

Left arm of our ninja can be sketched through a long & thin rectangle. In order to showcase right arm, draw two rectangles and later on both hands has to be represented in terms of circles.

Two Legs are also need to draw in terms of unusual position. So total of 5 rectangles has to be drawn for both legs & feet.

Now refine it with an outline and work upon head to make sure both eyes will be clear & visible and also keep the head round & tight.

For upper portion, use nice curved lines and illustrate chest & arms. For showing a discipline make use of good contour likes that highlights posture & gesture.

Repeat the process for the lower portion of your Action ninja.

Now throw some colors’ either black, brown & red to finish the masterpiece!

Morty is a lot easy and occupies t-shirt & jeans in its overall appearance and it is much smaller & way more natural than you usually think.

If you want to add some crazy cartoon characters in your list then Helga is a good choice. While drawing its cartoon, you need to pay close attention to head as this thing can be little strange with her rectangle hairdo.

The design of Kim Possible looks easy at first appearance but when you actually begin with the process of draw its shape, you may get confused. You need to add varieties of features in her face with crazy parachute pants right from the 1980s.

The companion of Scooby Shaggy also love its treats & also like to run-away from the monsters at first sight. He can solve mysteries and fun to watch.

● Well, drawing cartoons is always a fun loving thing to do. You can pick any one cartoon for drawing some favorite designs.

● You can make use of professional apps to give proper background to your poster or sketch making.

● For Fictional creatures, you can illustrate their styling features, fun facts and lot more to make it much more interesting.