Download on the App Store
Get it on Google Play
Download
Download
Call us: +1-60-4343-8521
Mon-Fri 6:00 PM to 11:00 AM Pacific Time
International phone rates may be charged by your service provider
Filmora Video Editor
Record and Edit Screen/Video/Gameplay Video Easily
Try It Free Try It Free

Best Among Us Discord Bots

Among Us is the most trending game in 2020. It requires players to play together to find the imposter among them before the imposter gets them all. Especially when everyone had to stay indoors because of quarantine, there wasn’t much to do but game online with your friends.

Discord is a program that allows users to communicate with each other while in-game or just in general. There are AI programmed users on Discord called Bots which add certain functionalities for users to make all things working efficiently in Discord.

So, with the rise of the game Among Us, a lot of Discord users have been looking to add bots related to Among Us into their Discord Servers.

Let's go over some of the Best Discord Bots that you can add to your Discord Server.

Part 1: Best Among Us Bots for Discord

This bot is pretty useful as it is easy to use and easily allows one to moderate the game by muting and deafening players.

It can also be used to share lobby codes, game stats and more. It has a lot of upvotes as the best Among Us Discord Bot and a good rating with great reviews.

To create a new link all you have to do is type !new in the chat and it will create a link to your game lobby and then you add players to it by typing !link [@username] [colour] in the chat.

You can check out Among Us Crewmate here.

Among Us! is a Discord Bot made especially for the Among Us game. This bot is currently a part of 1900+ servers

Add the Among Us Bot to:

I have used this Bot personally and love it, with its simple and large variety of commands its really easy to check who’s up to play and moderate the game. The best part is the report system. It is no secret that a lot of players try to ruin the fun for others and this system makes it easier for you to ban/mute someone to make it easier for everyone else.

To get started, just type !help in the chat and the bot will display a tab with everything you need.

You can check out Among Us! Here.

Doraemon is a RPG engagement Bot with the option to play and moderate Among Us.

It can be used to moderate voice and chat channels for users currently in the game. But not only that, it has many more commands from RPG, PvP games and much more.

This bot is added to more than 13000+ servers and 900+ upvotes and increasing. Mainly because of the other many features it provides. The star being the Doraemon RP. Doraemon is a very famous Japanese animated show that featured two main characters and gadgets that were used to have fun and solve problems.

This Bot doesn’t help with the Among Us game but it provides its very own In-Discord Among Us Experience.

You can use this syntax for Doraemon cat [command] [subcommand] [arguments]. To start the Among Us game just type cat amongwumpii.

You can check out this bot here.

More than 3300+ servers have been attached to this bot and currently have an upvote count of 176. When playing Among Us, it controls the speech channels and auto mutes and deafens players according to the comfort of the game.

It can also be used to inform others about the state of the game.

To get started type am.help in the chat and it’ll show u a list of commands that it can perform, but all commands are to be preceded by am.

To start the game just use am.start <code> command and then players can join the game using am.join command but they have to be in the voice channel that the host is in.

What’s better is that this bot can also help you get better as it provides maps, wiki and tips about both Imposter and Crewmate.

So get this bot right now here. 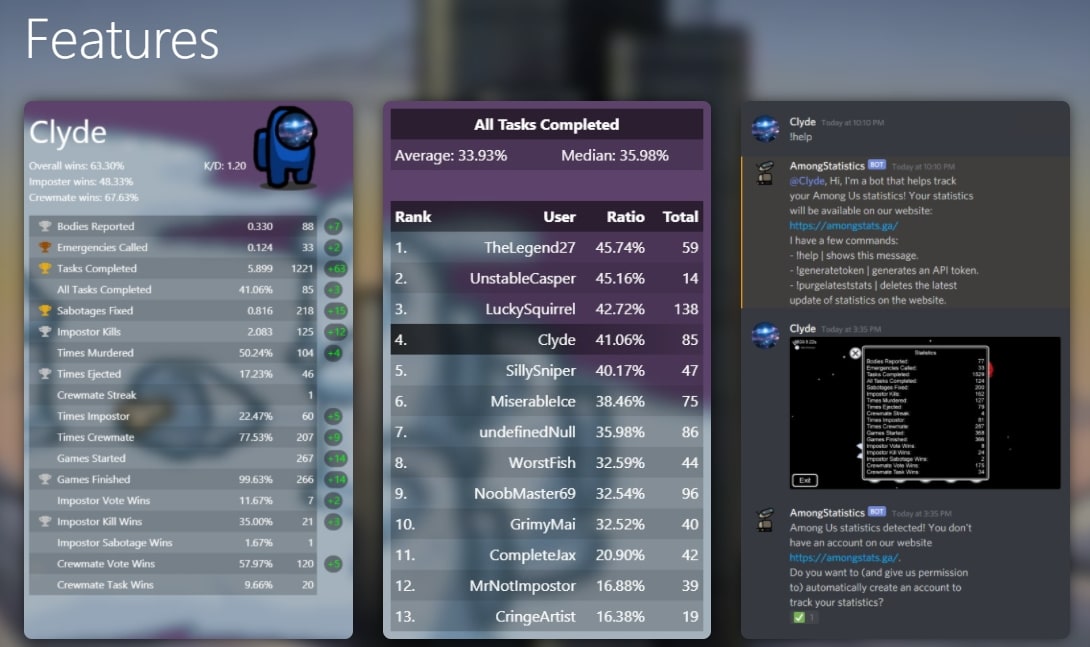 This bot doesn’t specifically improve the gameplay of the game but it helps the competitive feel when you and your friends reach a certain point in the leaderboard.

All you have to do is post a screenshot of your in-game stats in the chat with the bot. To get started just type !help in the chat.

You can check out Among Stats at their official website.

If you aren’t very good with commands and such then this is the bot for you. Don’t get me wrong, you still need commands but there are less commands and more visual options like reacting to the bot message with a certain emoji.

To begin an Among Us Helper session, run the command

Once you do that, go to the channel that the command tells you the control panel is in.

The control panel has a bunch of reactions that allow you to do certain things.

You can check out Among Us Helper here.

Part 2: How to Add an Among Us Bot to a Discord Server?

Adding a bot to your server is pretty easy, first decide what bot you want to add and then go over to it’s site. In this example we’ll be using Among Us Manager Bot as an example.

After you click the button, you’ll have to sign in to your discord account and it will then ask which server you wish to add the bot to. 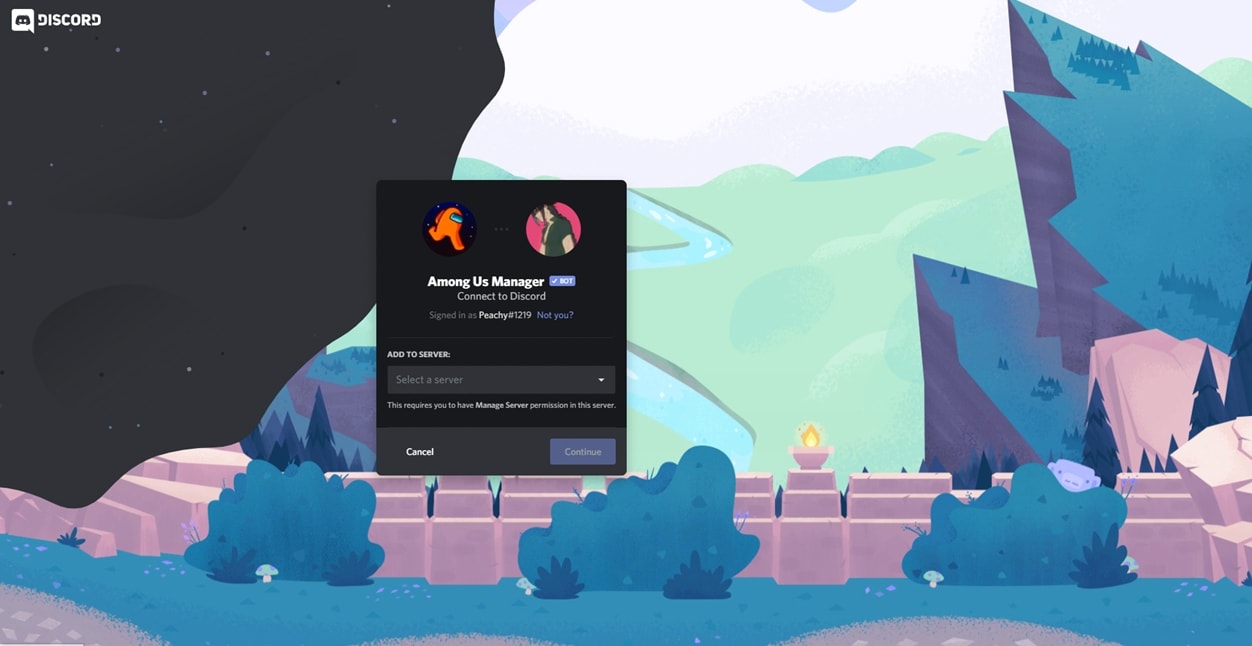 Next, it’ll ask what permissions you want to give to the bot. Go over this carefully and select the ones you want. But you may lose some functions if a certain permission isn’t given. 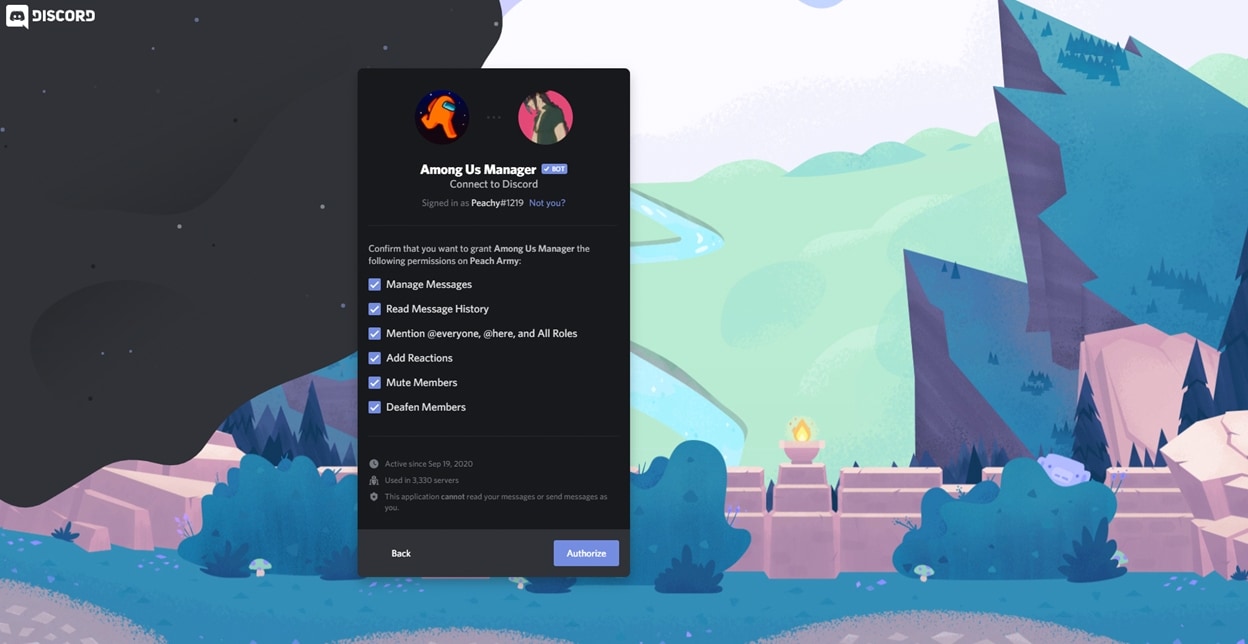 Click Authorize. It will then ask you to verify whether you’re human or not. If you pass this little test, the bot will be added to your selected server.

You can then go over to your server in discord and found your bot there.

Now all that’s left is getting your friends and hoping into a fun filled and thrilled game of the murder mystery game Among Us.

In the end, all the Among Us bots are basically used to mute players and unmute them at certain points so that there is no cheating and everyone can play the game fairly and it doesn’t get ruined because of some toxic rotten tomatoes.

Thank you for your comment. We will review it within few days.
You May Also Like
How to Report Someone on Discord

Today we will look into how to report someone on Discord using desktop and mobile devices. Moreover, we will look at other ways to deal with indecent behavior, such as kicking people or banning them.