Download on the App Store
Get it on Google Play
Download
Download
Call us: +1-60-4343-8521
Mon-Fri 6:00 PM to 11:00 AM Pacific Time
International phone rates may be charged by your service provider
Filmora Video Editor
Let you make shepard tone like a pro
Try It Free Try It Free

Everything You Need to Know About the Shepard Tone (Free Download)

Do you know about the shepard tone?

Named after cognitive scientist Roger Shepard, this tone is a unique tone that is represented by a number of sine waves.

When you analyze it visually, it shows that the tone is either increasing or decreasing.

But that’s just an illusion, the octaves that separate it make it sound like it’s neither going up or down in overall pitch.

How does it work?

Your ears can get tricked because the tones that are increasing in pitch together are constantly changing in volume. The tone that is still increasing is the loudest of the three tones that you hear. You can generate tones with some amazing online tools.

The track loops, but the prominent tone is always the one that stands out to you. And, thus, it creates the Shepard tone illusion, where your ears believe that the tone is ascending infinitely.

Part 1: The Purpose of the Shepard Tone

The Shepard Tone has been used in a variety of films for many reasons, but the main purpose of it is that it creates tension.

In scenes that are already tense for one reason or another, adding the Shepard Tone to the score can really get people engaged and make them feel nervous or hypervigilant.

One of the most famous uses of the Shepard tone is in the film The Dark Knight. When the Bat-Pod is in use during chase scenes, the sound designer utilizes the Shepard tone to make it feel like the chase is never-ending.

It draws you in and keeps you on the edge of your seat while you wait for Batman to actually achieve his goal.

So, as a filmmaker, you want to be able to utilize the Shepard tone for your own purposes, correct? Let’s take a look at some Shepard tone generators and downloads you can try out.

Do you want to mess around and do some mixing with the Shepard tone? Then these three generators can help you to do that with ease.

This generator is a really fun way to mess around with the Shepard tone and get everything just right. The team at MyNoise made it very simple to use – all you need to do is pull the different tones up and done and listen to the results. They do state that listening to it for too long could cause some anxiety, but if you know that going into using it, you’ll be ready to go.

The team at Sampleism put together a Shepard tone generator that works similarly to a piano. Basically, you download it and then you can put together different chords in order to make the effect that you want to. The interface also allows for different octaves and other changes that you may want to put together to get the effect.

The Codepen Shepard tone Generator is an interesting way for you to include a Shepard tone generator on your website, or to allow you to mess around with the Shepard tone and how it sounds. With options for HTML, CSS, and JS, you can set it up and start making tones in just a few minutes of effort.

Part 3: Where Can I Download the Shepard Tone Right Now

If you’re looking for a simple way in which you can download samples of the Shepard tone without the need of mixing it yourself, these three resources can assist you.

AudioCheck has an easy to use file that you can utilize for your own. Not only that, but they have a very solid explanation of how the whole thing works, and why our brains do what they do. 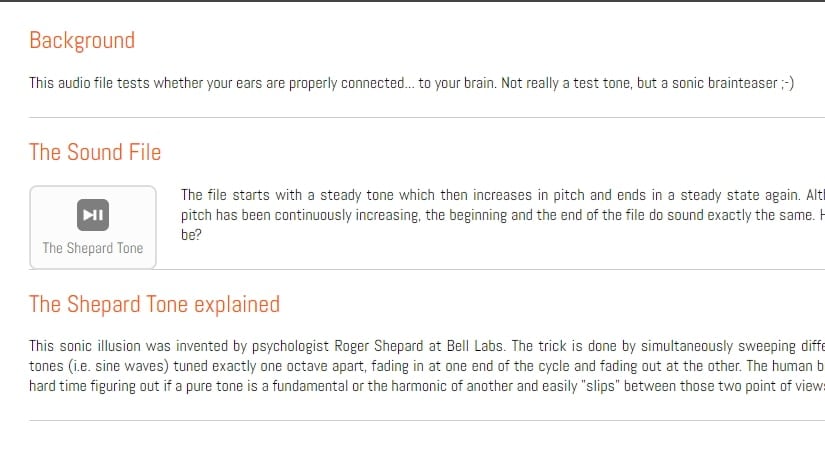 If you want something straightforward that you can just insert into your films, this is a solid option to consider.

White Noise Market has dozens of different sound files and such that you can use in your work, including a descending Shepard tone. They even have a sample that you can listen to on their site.

The app for White Noise Market makes it easy for you to access all of their audio tools, play them back, and download them for whatever uses you have in mind. 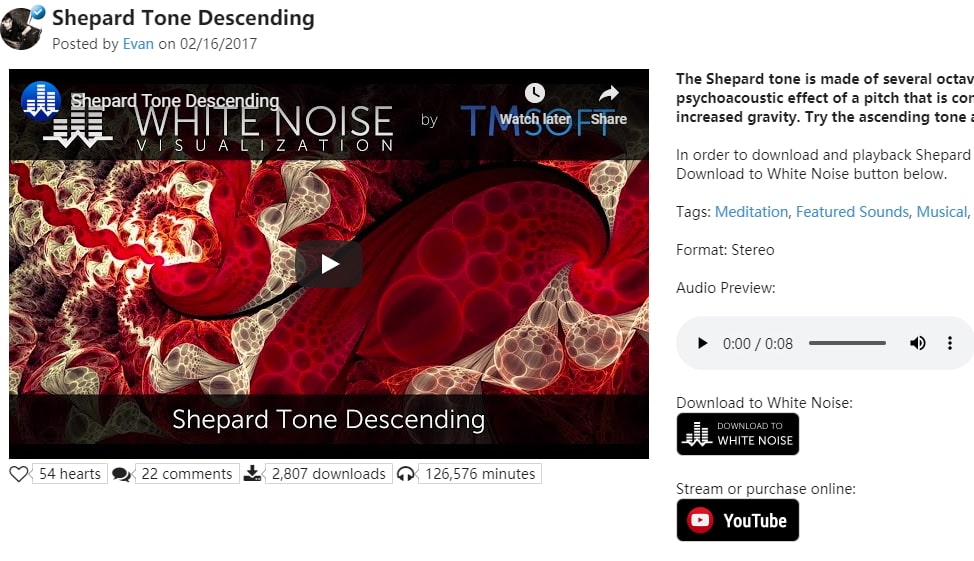 Electrocado is an Australian Duo that features multiple genres in the music that they perform. In their latest album, The Shepard Tone, they actually utilize the Shepard tone in order to engage listeners.

This website offers The Shepard Tone album on a Creative Commons License for non-commercial use. They also have a Donate option available if you’d like to give them something for the interesting work that they have provided. 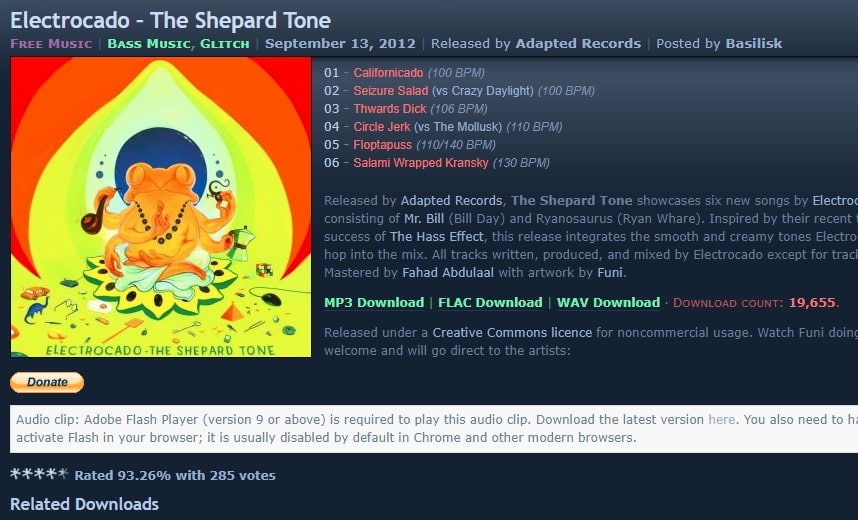 As you can see, there are a lot of different ways in which you can make the Shepard tone a part of what you’re doing in filmmaking.

If you use it wisely and integrate it, it will allow you to evoke emotion and really get people engaged with what you’re showing on the screen. How will you use the Shepard tone in future projects? Are you excited to see what you can get from it?

Thank you for your comment. We will review it within few days.
You May Also Like
How to Make Halftone Effect in After Effects And FilmoraPro

Simple Guide to FCP X: How To Add Effects in 3 Steps

In this article, I want to show you how to apply an effect to a clip, modify that effect, temporarily turn that effect on or off, or delete it entirely.

After Effects VS Adobe Premiere, 9 Differences Tell You Which One is Better?

This article points out the key differences between After Effects and Premiere to get a clearer understanding of what is best.