Download on the App Store
Get it on Google Play
Download
Download
Call us: +1-60-4343-8521
Mon-Fri 6:00 PM to 11:00 AM Pacific Time
International phone rates may be charged by your service provider
Filmora Video Editor
Easier Way to Apply Green Screen Effects to Make Your Video Like a Pro
Try It Free Try It Free

How to Capture Your Nintendo Switch Game Video

The Nintendo Switch is one part handheld and one-part home console single device used to play games despite your location. The introduction of a hybrid console is truly a success that offers an extraordinary graphical quality while transitioning within the home console. Although this unique adaptability needs the compromise over functionality and power compared with the handhelds and dedicated consoles that have been introduced before. The games are played on the home part that is dock and console itself, over which we put the console in the dock to get the output image over the TV screen.

Moreover, it doesn’t require the installation of the software over the hard drive. It also includes the Micro SD slot at the switch backside, which provides additional storage capacity. But the main question is how to record switch gameplay?

This article will be in two part:

Part I: Capture Your Switch Video

The controllers come up with the built-in capture button. However, this button only allows the screenshot of the video which is not ideal in any case. But it records the video for 30 seconds as well. If this time is enough to capture your gameplay then do the steps:

Step 1: Hold the controller in your hand.

Step 2: Press the capture button on the left side of controller.

Step 3: Hold down this capture button marked with the square

Step 4: Wait until the message regarding capture completion is received at the screen top

Step 5: Your last 30 seconds of gameplay will be saved in the ‘Albums.’ It will record the 30 seconds gameplay right before you press the button down, so there is no need to worry about hitting it in advance. It is a quite simple step and allows only posting the clips to social media or saving them in your phone album. It also provides video editing before posting it on social media. You will be able to see the Nintendo Switch video capture in the Albums. 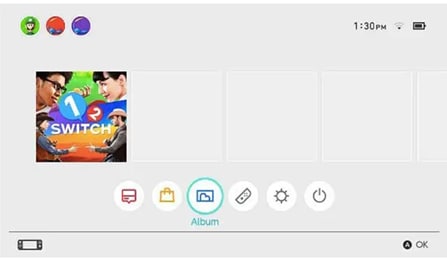 If you wish to save some important moves of your game in your album, then here is the second way. Some games have the option of replay saving at their bottoms, complete list including:

Let’s take Smach Bros as an example. To do the recording, follow the steps:

Step 1: As soon as you have finished the game, the screen of the final score appears. A button appears at the top right down corner of the screen ‘Do you want to save the game’. 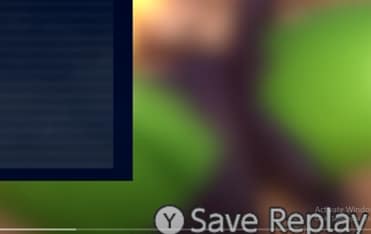 Tips: Make sure that you don’t press buttons other than ‘Y’ if you want to save the gameplay. The game replay will be lost if you do so.

Step 3: The video will be saved in the replays where you can check it. Go to the ‘Menu’ and then ‘Replays’, and the saved video will appear here (however, there is one limitation of such replays saved, that is they will be deleted as soon as the game is updated so make sure that you save the game replays in your album). 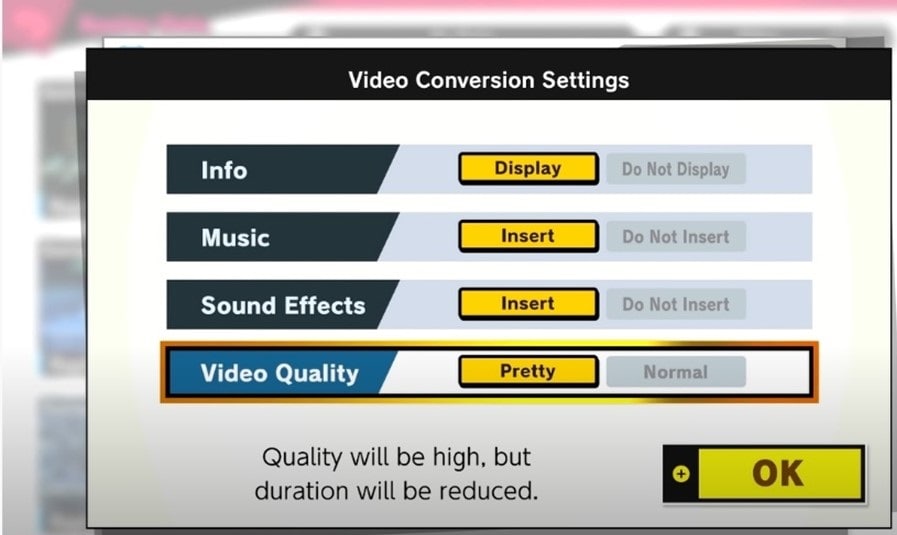 Tips: Within the video conversion settings, you can include information about the display, music, sound effects, and video quality of the replay. Check all these settings and select them the way you want your gameplay to be. Video quality is the most important thing to consider.

Step 4: Your gameplay will be converted to the video. In the videos section of the game menu, you will find all the videos that you have saved. Now power off your Switch and remove the SD card from your Switch. Connect the SD card with PC, it will appear in the folders shown below.

Choose your capture card, connect it with Nintendo switch and your PC, you can capture the gameplay through a computer with the following steps:

Nintendo Switch allows you to trim video easily in album: 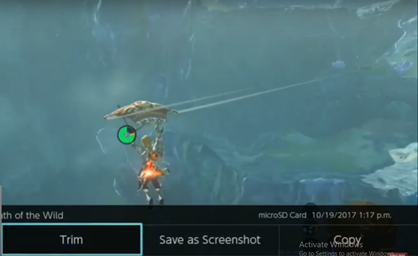 Filmora X is a multipurpose video editing tool that can be used to edit your videos in the best possible way. One way is to edit the gaming montage is by editing it to the beat and the other is the speed control. Beat detection by beat marker is done by software automatically and adjusted with the video. Speed control is the key element here and adjusts it with the video. Adjust the speed by adjusting the duration. You can also add effects such as clinches to the video while adjusting the speed.

The gamers are always looking for ways to record the Nintendo Switch gameplay whether it requires them with capture card or without it. It is quite difficult to stream the Nintendo switch but it actually works in favor of gamers because there is quite low competition in video gameplay. The Nintendo gamers have big loyal viewer base and they serve as the best source for the new streamers who want to grow their channel quickly.