Download on the App Store
Get it on Google Play
Download
Download
Call us: +1-60-4343-8521
Mon-Fri 6:00 PM to 11:00 AM Pacific Time
International phone rates may be charged by your service provider
Filmora Video Editor
Make high-quality professional video quickly
Try It Free Try It Free

Talent Release Form for Filming and Video to Free Download

Oh! You got a great story/script to film on?

Well, that’s great! And since, you’re all set to begin the shooting, there’s one thing you must keep on your checklist as a pre-requisite, i.e. get the talent release form signed! This is vital to protect you from legal problems or getting sued.

You should get it signed by all your cast members that are present physically or in still pictures or in voice-overs or any sort of “talent” being used within the film/video.

Having a film / talent release form signed, makes both actors and filmmakers to avoid risking factors that may occur during and after filming a video production.

In fact, it is the best practice to protect your rights.

Part 1: The definition of a talent release form

Now, you may wonder, what exactly is a talent release form?

And what’s the purpose of it, right? Basically, a talent release form is a legal document that authorizes the filmmaker to sell or distribute the film/video after production that features your talent.

In other words, this legal document is specifically formulated and must be signed by the talent featured in the film/video to protect you from getting sued.

For instance, let’s suppose, once the production has wrapped up and you’re all set to get the film/video out for promotion or for any commercial purpose or release it digitally.

Your talent, out of the blue, goes cold feet and puts up a case on you for unauthorized utilization of someone's image or voice.

Part 2: When to sign up a talent release form

Therefore, in this section we’ll discuss about when to get a talent release form signed up.

Basically, you need to get a talent release form signed before the film/video production starts. You’ll need it whenever you plan to sell the film/video, or the rights to the production.

This is because the interested media company will require these talent releases before finalizing the deal.

You must ensure to obtain a talent release form from both primary actors and extras involved in that particular video production. 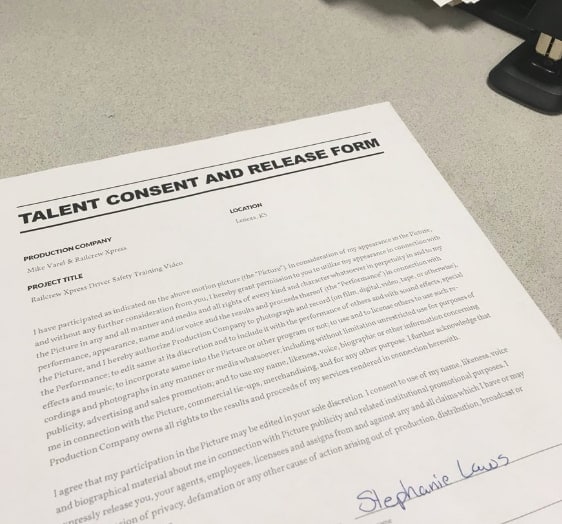 What is meant by talent actually?

Also, the pets or other animals are referred under this term.

When it comes to an animated video or radio advertisement or any other audio-only production where an actor (paid or unpaid), be it professional or nonprofessional, only furnishes his or her voice to the production. An individual talent is then required to sign a talent release form.

But, if in case, the talent aged below 18 years and is a minor, the parent or the legal guardian of the child is supposed to sign the release form.

And secondly, if an animal is the talent, the owner of the animal is required to get the release signed.

When you do not require a talent release form?

However, you must always consider obtaining a talent release form, if by any chance the film/video has to be exhibited in a film festival, contest, digitally (online platforms) or in the public. This is vital even if it is not mean for commercial use.

Part 3: What does a talent release form look like

On the basic grounds, the talent release form for an actor must cover the following aspects: 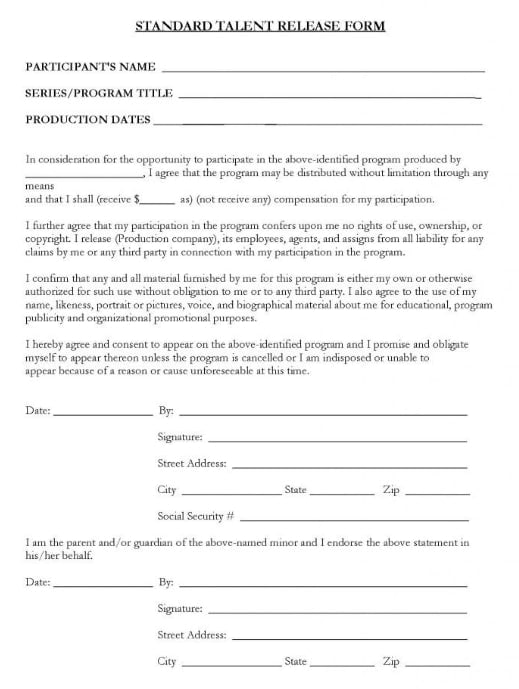 Film Sourcing is a one stop solution to equip you with all sorts of Film production documents templates and that too, for free.

From pre-production documents like talent release forms / film release forms to marketing templates or samples, you’re going to find it all right here stacked up in one place.

Next, we have mentioned the 123FormBuilder that offers you free talent / video release forms.

With this film release form template you are enabled to modify it as depending upon your requirements and then publish it over your website.

Making the process absolutely digital and that too, in just a matter of few seconds.

Moreover, you need to do any sort of coding to implement it over your website! What’s more? Well, you can also add multiple recipients, functionality to upload files and much more. 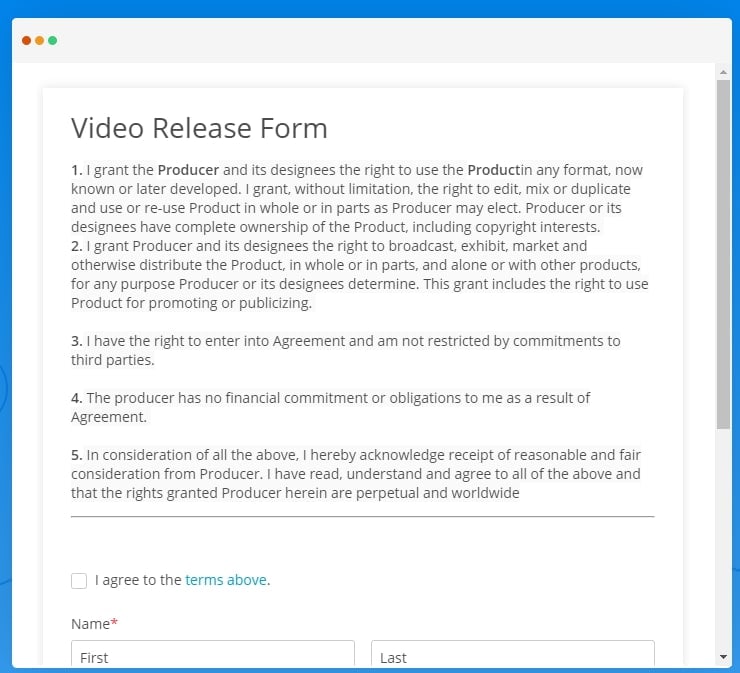 You can simply copy the content from the aforementioned URL, paste it over a word document, and get it modified as per your preference. Print it and get it signed to protect your rights, simple as that.

You can easily download the 32 most popular release forms. Simply click on the required form, fill it as per your requirement and then download it in a print ready format.

Or, you can directly send it to the actor’s email to get it signed. 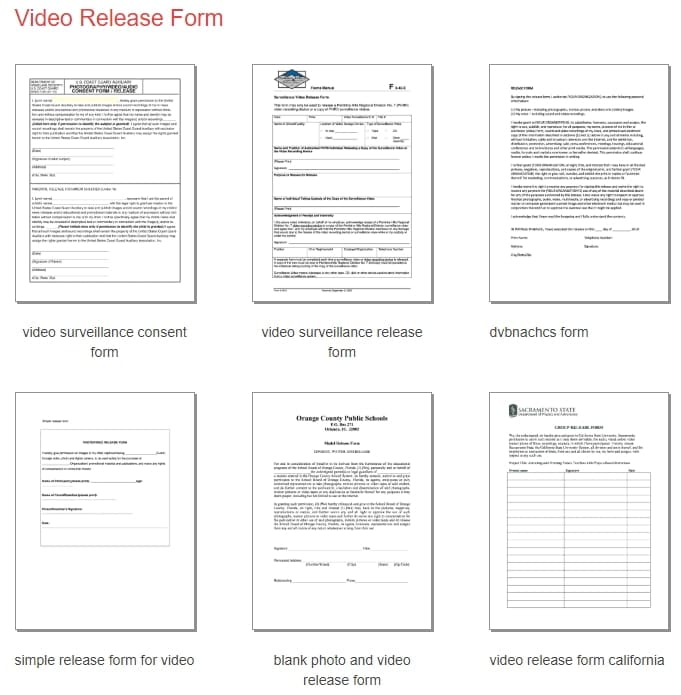 With all this comprehensive information on talent release forms, it’s now time to conclude the discussion. We now firmly believe that you now understand well about talent / film release forms and the need of it to protect your rights. Happy Shooting!

Thank you for your comment. We will review it within few days.
You May Also Like
15 Types of Camera Shots in Film Beginners Need to Know

Food video is a trend now. If you want to know how to shoot food videography easily, check this post. It includes 5 tips for better your video.

Macro video is so amazing! If you want to shoot high quality macro video. Here we have 6 tips for shooting great macro video. They are easy to practice.