How to Make Sports Edits Videos

Sports videos are always epic and exhibit some intense action going on. Sports videos become more captivating when they have awesome actions with awesome effects.

Sports videos are always epic. We have some intense actions going on, we got some teamwork and it’s always fair that we bring out some awesome effects. Let’s see how we can take a sports video and use some simple effects and transitions to make it look a lot better.

We will be turning and transforming sports video into something epic such as a trailer or something you would see in Hollywood films. Let’s jump into the Filmora and see how this effect is done.

You have two videos of sports where people are playing basket balling. You will choose a video for there are a lot of actions and these effects will look cool on them. Track the first video into the timeline and make sure to always match to media and the same thing for another video.

Start working with the first video. Zoom in on the timeline. Then just double-click on your video. Select the speed option. Go to customize. Then adjust the speed accordingly and make the keyframes at different points. In the center make another keyframe and slow its speed of it.

When you are finished click OK. Make sure about making a cool transition instead of a simple cut.

You can choose the direction of your speed blur. Drag this in between the two videos. The shorter the transition, the faster the effect will take place.

When there is a pause then remove the first half. Add a transition. Pay attention to the movements of the people in the video. Make sure that the epic part of this video has an incredible effect.

Double-click on the video and head over to the speed ramping effect. Go to customize. Add keyframes and one in between the two. Adjust the speed accordingly. Go for the part when the person is about to make a shot. Make another cut. Drag the two videos together.

Go to the glitch section until transitions are removed. Choose any glitch that you want. Just click it and drag this in between the two videos. The faster the transition, the smoother we will work.

When the main star of the video is blocked by some other person, then you will have the opportunity to split the video.

Double-click on the video. Go to the speed ramping section. Add a keyframe. Go for the part where the main star of the video is in the frame. Add another keyframe and then add the third keyframe in between the two. Speed it up and click OK.

When the main character is covered, everything is fed up. And when she is in the frame, just cut that part where she is celebrating. Split that video, close the space and then add another glitch effect.

Try to choose something next different so that there will be a variation. Track this right on the top and then adjust the direction. Now you will have some epic highlights of the basketball tournament.

Go to the effects menu and add some overlays to make this more mega spark video. Add light leak from the overlay. If you want to see what effect will stick on your video before applying it, select the video and double-click on that effect. So this way you will get a clue about the actual effect before putting it in on your project.

Drag it down and use one type of light leak in the first video which is the start of the tournament. Use another effect from the light leak for the rest of the video. You can use more than two videos.

To add some color grading, type epic, and select any effect just to add some sharpness to the video. The video will look darker than it was to look more epic.

Now your sports video will look a lot cooler with some glitch transitions and speed ramping. You will see the techniques that can highlight the most important part of the video.

You can work according to this guide and make your sports videos a lot more interesting and better by adding effects and transitions in the Filmora 11 timeline.

How to Make Sports Edits Videos

Go to chrome, download, and install Filmora for free. Filmora is available for both, Windows and macOS computers. 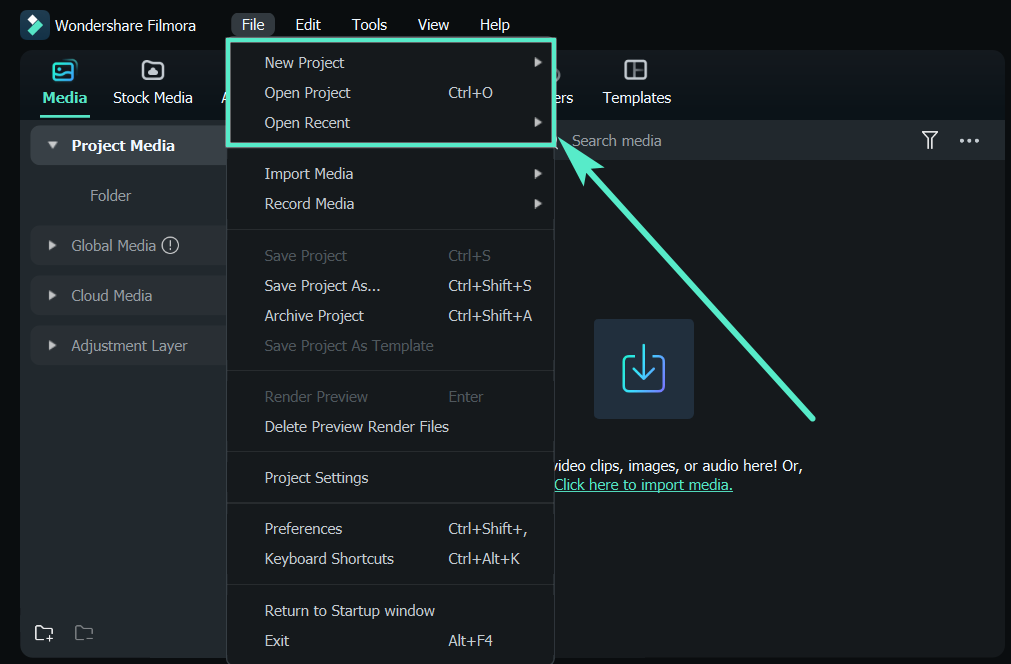 After downloading Filmora, launch the Filmora timeline and import two sports videos onto the timeline. Choose those sports videos which involve a lot of action.

After the successful import of the video, drag both videos down onto the timeline and always make sure to match the resolution to the media. 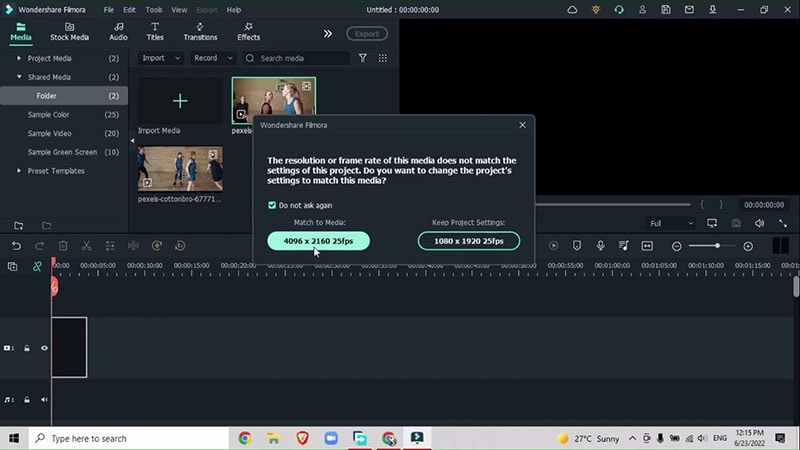 The next step is to thoroughly see both videos and choose points where you want to add effects. For example, you have two videos. In one video, the ball is thrown up in the air and the basketball match starts. And in the other video, a player scores a point by putting the ball into the basket.

In the first video, double-click the point when the ball is around to be thrown up in the air. Double click on the video, go to Speed > Customize > Speed ramping. Adjust the speed of the frames according to your video. 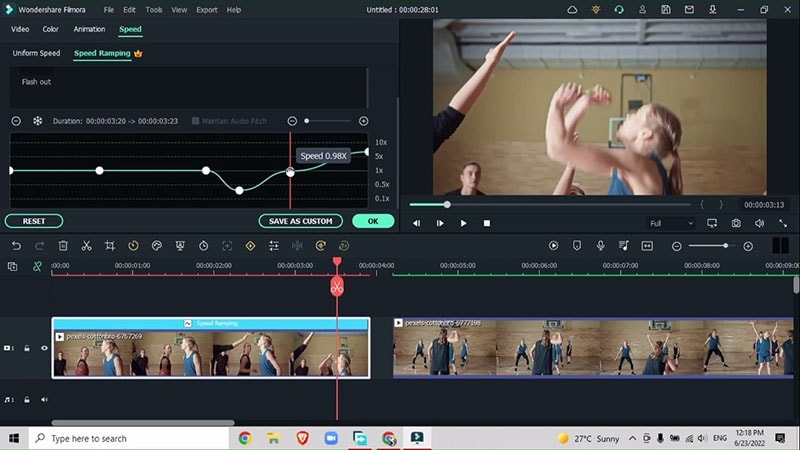 Add a transition in the point between the two videos. Go to transition > Speed Blur > Blurry Roll 2. Make sure to choose a transition that has arrows on both sides, and not on one side only. You can choose transitions of your choice and according to the video that you have chosen to edit. 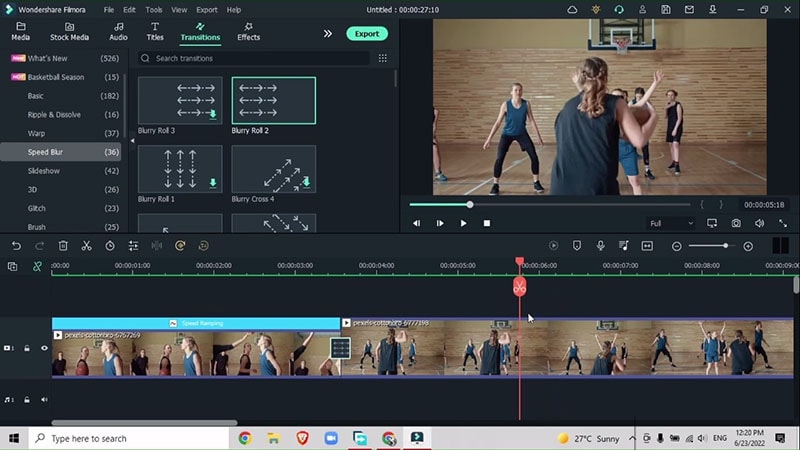 Adjust the speed for different points in the second video after adding a transition between the first and second video.

Observe the movement of the players in the video and mark the points where the speed needs to slow down or where it needs to increase. Drag the keyframe in the speed ramping and adjust the speed accordingly. 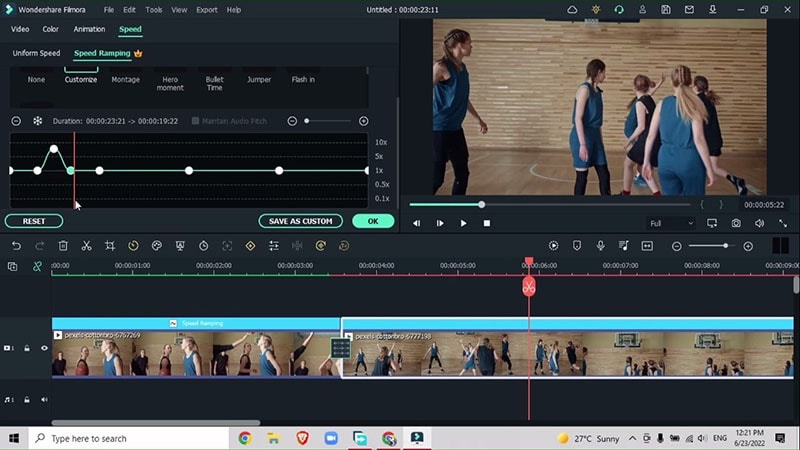 Focus on one player in your video and don’t let that player go out of sight from the videos. To keep the player in the spotlight, cut the extra bits of the video where the player to be focused is covered by the other players in the video.

Right after adjusting the speed in the second video, notice the point when the player is about to throw the ball up toward the basket. Mark that point, go to Effects > Glitch > Digital Glitch Effect, and drag it in between the two videos.

The faster the duration, the faster the transition so you will get a glitch effect right before the player is going to score a goal.

You can add more glitch effects where you need to split the video into different sections so that the video transitions smoothly to the next section of the video.

To tie the video together, go to Effects > Overlay > Light Leak > Travel Chic overlay (you can choose any overlay of your choice. Similarly, you can add Blue Flare effects and more effects to tie different sections of the video together to give a more presentable look.

For adjusting the color grading and sharpness, you can go to Effects > Epic > Stylish Apocalyptic Effect and drag it down to the top track. Now you are finished with adding effects to your sports videos making them look like a creative highlight. 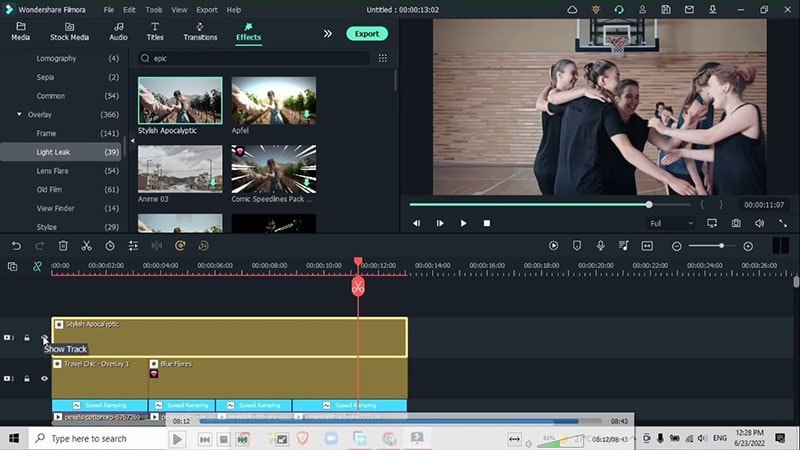 Just like the highlights of big ceremonies, sports highlights have become very important in this digital era. Your short clips from your matches can turn into a creatively designed highlight to give it a look as in the commercial advertisements, so don’t wait and add these fun effects to your sports videos in Filmora. 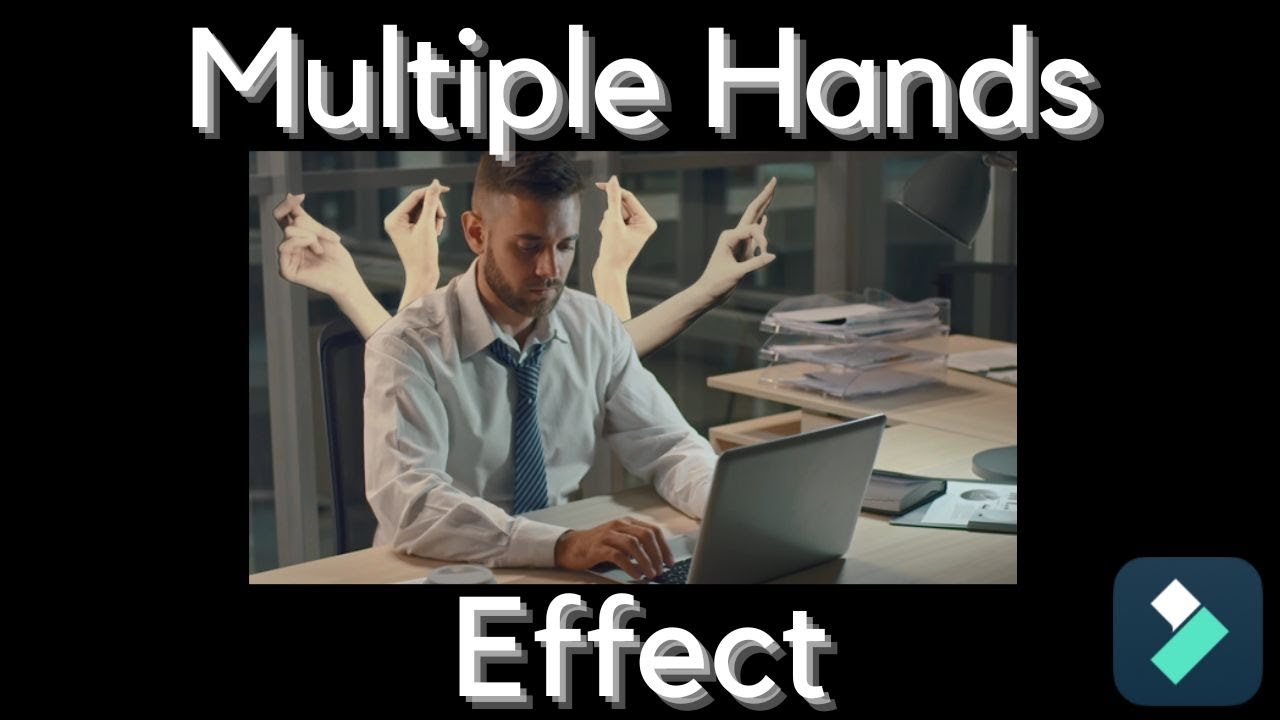