How to Make a Green Screen Video with Adobe Rush

Combining separate pieces of footage into a single video clip has been a highly complicated process in the past, used only by the film industry professionals. Today, everyone can make a green screen video from the comfort of their home in just a few minutes. Read on, if you would like to learn how you can enrich the videos you share on social media with the green screen effect.

Software like Adobe Premiere or Adobe After Effects enable their users to perform even the most complicated video editing tasks. Unfortunately, the same can't be said for the recently released Adobe Rush app that lacks some basic video editing tools YouTubers frequently use in their videos. The green screen feature is also unavailable in Adobe Rush, and the only way to composite a video with this app is to open the project file in Adobe Premiere or Adobe After Effects.

What's more the Adobe Rush costs $9.99 per month, which makes it a rather expensive option for social media video creators. Choosing the subscription model that includes Premiere Pro CC or opting for the Creative Cloud option is a much better solution than purchasing Adobe Rush as a single app. However, the software included in the Creative Cloud subscription model can be overwhelming for inexperienced video editors, which is why video editing software like Wondershare Filmora that lets you create green screen videos effortlessly is a much better choice.

Wondershare Filmora enables you to make chroma key in a very easy and simple way. Check this video to get inspired:

Detailed steps on how to use Chroma key effect in Filmora:

Before you can start combining two separate clips you first must make sure that the footage you're going to be using is properly captured. The actors in the video recorded in front of a green or blue screen shouldn't wear the clothes that have the same color as the background and you should try to avoid having too many details in the shot as this can complicate the process of creating the green screen effect.

Import both the background and the overlaying clip into the software and place them on the timeline. The clip containing the footage recorded in front of a green screen should be on a track above the background video. 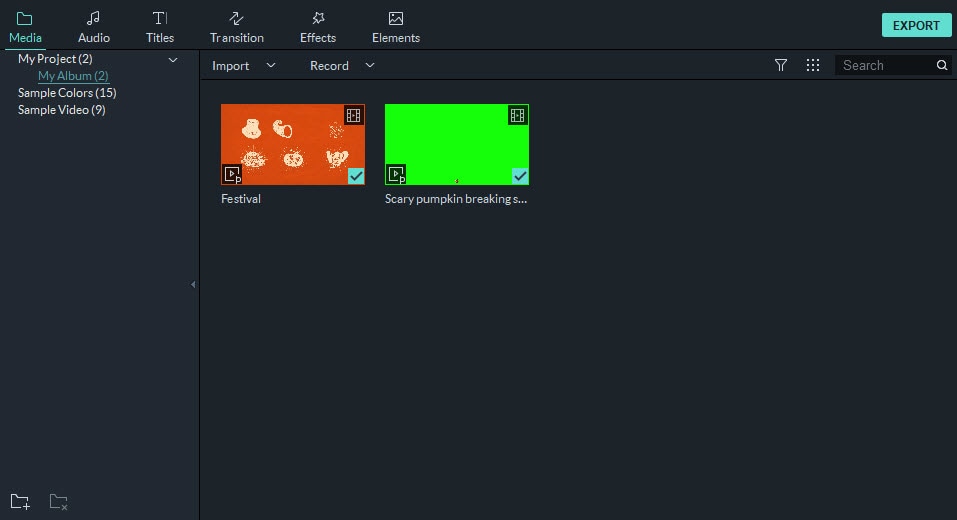 2. Drag the clips into the timeline

Afterward, you should make sure that the overlaying clip is selected and then click on the Edit or the Green Screen icon in the software's toolbar to gain access to the Chroma Key settings.

You can then select the color you'd like (usually the green or blue) to make transparent, fine-tune the Offset, Tolerance, Edge Thickness, and Edge Feather sliders to make the green screen effect more realistic. 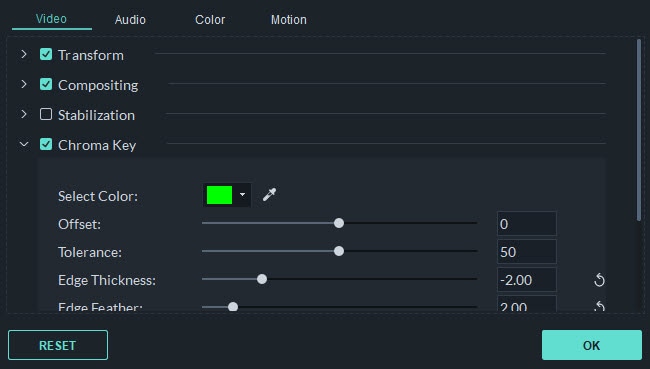 You can see all the changes you make in the Preview Panel and you can play the video if you would like to check how the resulting clip looks like. When ready, click on the OK button to confirm the changes and resume working on your project. You can click on the Export button if you want to share your green screen video on social media or save it to your computer.

You may also like: >> Best Free Green Screen APPs

Using the Chroma Key effect in Filmora can help you make all types of videos that involve narration more interesting. In addition, you can record any action you want in front of a green screen and incorporate it into a separately recorded video. On the other hand, Adobe Rush doesn't offer the tools you're going to need to create a green screen video. That's why Filmora is a much better option than Adobe Rush if you want to composite two or more video clips into a single clip.

Thank you for your comment. We will review it within few days.
You May Also Like
How to Add Transitions in Adobe Rush

We are going to show you how you can apply transitions to your videos in Adobe Rush and we’re going to offer an alternative solution.

The only way you can fade audio with Adobe Rush is to open the project in Adobe Premiere Pro CC. Here we recommend a easier way to fade in/out audio files.

How to Reverse Videos in Adobe Rush & Filmora

If you choose to purchase Adobe Rush as a single app, you won't be able to reverse videos, since the feature is not included. Here we recommend an easier way to reverse video.