Download on the App Store
Get it on Google Play
Download
Download
Call us: +1-60-4343-8521
Mon-Fri 6:00 PM to 11:00 AM Pacific Time
International phone rates may be charged by your service provider
Filmora Video Editor
The best editor helps you easily edit business videos with powerful features.
Try It Free Try It Free

The Best Song Finder Apps to Recognize Music on Android

There must have been instances in your life when you heard a song on the go, and it took you down memory lane, with you remembering those long-gone times when you used to listen to that song regularly.

You tried searching for that song in your phone's music app so that you might savor some sweet nostalgia, but alas, you realize that you no longer remember the song's name or any definitive lyrics or the artist's name.

Does that mean you forego that song until you remember the details? Absolutely not. There are many song finder apps that you can install on your android phone, which will help you find that song. You just need to hum whatever tune you remember of that song into the built-in-mic, and the app would do the rest.

Some song identifier apps for Android can be downloaded and used for free. Following are 6 of the best such apps.

On 15th October 2020, Google introduced the hum to search feature to the Google app and widget. Google hum to search is like any other hum to search music app and is very easy to use. Apple users can avail of this feature in English, while Android users can search songs in excess of 20 languages. Almost 4 billion people worldwide use Google, making it the most popular app of all time.

Using your hummed input, the Google hum to search algorithm identifies probable songs that sound closer to the tune and presents you with the results. Then you choose the appropriate match from among it. The results also include information on the artist and the song, related music videos, covers, lyrics and song analysis.

This is how you use the Google app for song recognition:

Step 1- Open the Google app or Google search widget on your phone and tap the mic button.

Step 2- Either click on the "Search a song" button or say "what's this song?" before humming the tune for 10 to 15 seconds. That's it. That's all you need to do, and the Google hum to search feature will do the rest.

It is as easy to identify a song using Google Assistant. Say, "Hey Google, what's this song?" before humming the tune, and that's about what is required by the algorithm to pull out probable songs from the database.

And don't worry about the quality of your humming. It need not be pitch perfect, just distinct and clear enough.

Shazam music recognition app can identify your tune and song in seconds. You will get to find and listen to your desired song and get all related information like lyrics, videos, and artist's profile. 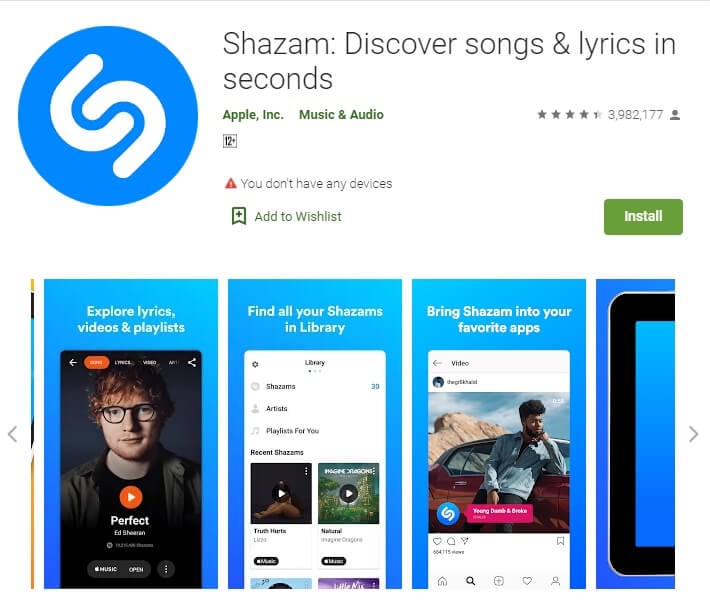 You can listen to the song on this song identifier app or add the song to your Spotify or Apple Music, or Google Play Music playlist. Shazam also allows you to watch music videos from YouTube and Apple Music.

The Pop-Up feature of Shazam is one of its best features. It enables you to identify music on any app like YouTube, Instagram, Facebook, and TikTok. Besides, you can use the app offline and in the background to continue identifying songs even though the app is not in use.

The app will also notify you about your country's and city's current music scene, recommend playlists according to your tastes and lets you share songs on social media. The Shazam app has been downloaded over 200 million times in 150+ countries. This should convince you of the app’s credibility.

In 2018, Apple Inc. completed acquiring Shazam for $400 million dollars. Since, then Shazam comes integrated with iOS (version 14.2 and higher).

The Beatfind Music recognition app for Android is one of the best song identifier apps out there. It is straightforward to use; just switch on the app's listen mode and let it process the yet unidentified music or song playing around you, and the app will identify it almost instantly. As many as 8 million people worldwide has downloaded this app. 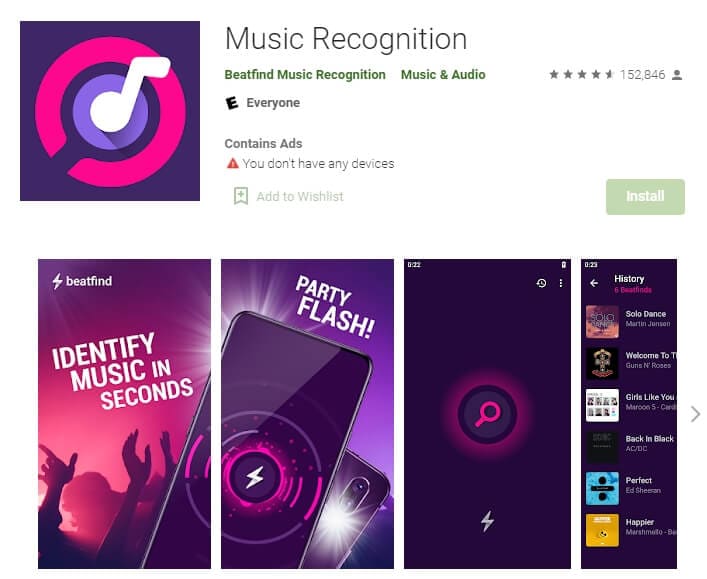 You can gather information about the song, the artist and be notified about the top tracks recorded by him/her. Beatfind will allow you to play a preview of the song on the app so that you can be sure that this is the song you are looking for and then you will have the option to listen to the full track on Deezer or Spotify or YouTube. It records your searches so that it is easier for you to find a song later.

The unique feature of this song finder app is that it can turn any room into a discotheque. It has a flashlight party mode that emanates strobes of light in sync with the music being played. You can also share identified songs with your friends and family via social media.

SoundHound is simple to use and has a host of features that give you a complete music experience. It has over 300 million users. Switch on the app's listening mode and discover any song or music playing around you. You can also identify a song or a tune stuck in your mind by just humming it to the listening mode and SoundHound will do the rest.

All your song searches are stored so that you can replay them later without having to search for them all over again. The app has real-time lyrics that let you sing along your favorite song. Consequently, you can also search for lyrics of a particular song by using type search and voice search features of the app (which works like Google Assistant). You can use this voice search to conduct all types of searches on this song finder app.

Apart from the above, you can get all related information on your discovered songs and share those songs with your friends and family via social media.

Genius is more of a lyrics finder app than a song identifier app for Android. Its database contains lyrics of more than 1.7 million songs, and that database is entirely crowdsourced. Besides lyrics, you will get authentic information regarding the backstory of the songs on the database. 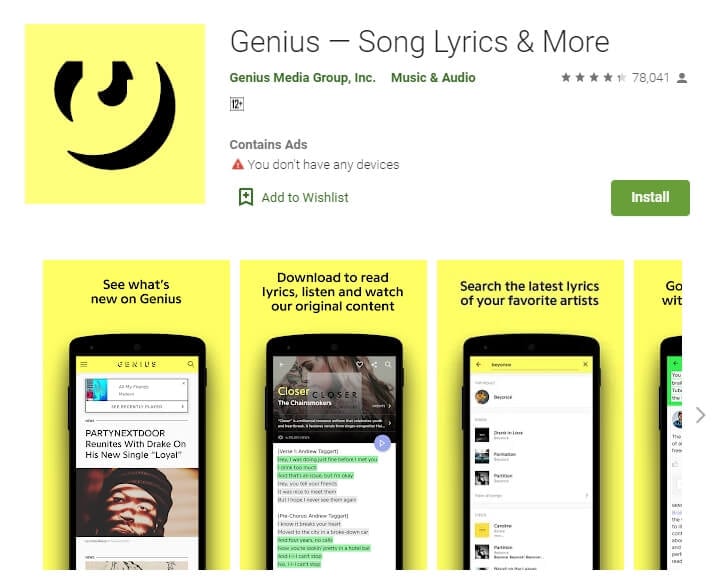 It is very simple to use the app. Just open the app, press the soundwave button and hold the phone near the source of the music. You will get lyrics and other information on that song in a matter of seconds.

Genius is run by the inputs of dedicated and obsessed music fans. So, if you fall into that category and want more to do with a song than just listening to it, then this is a must-have app for you.

6. MusiXmatch - Lyrics for your music

The MusiXmatch is an app dedicated to bringing you the lyrics to any song you are listening at the moment. It has a handy floating lyrics widget feature that enables you get real-time lyrics on the track you are playing. The app has been downloaded more than 50 million times. 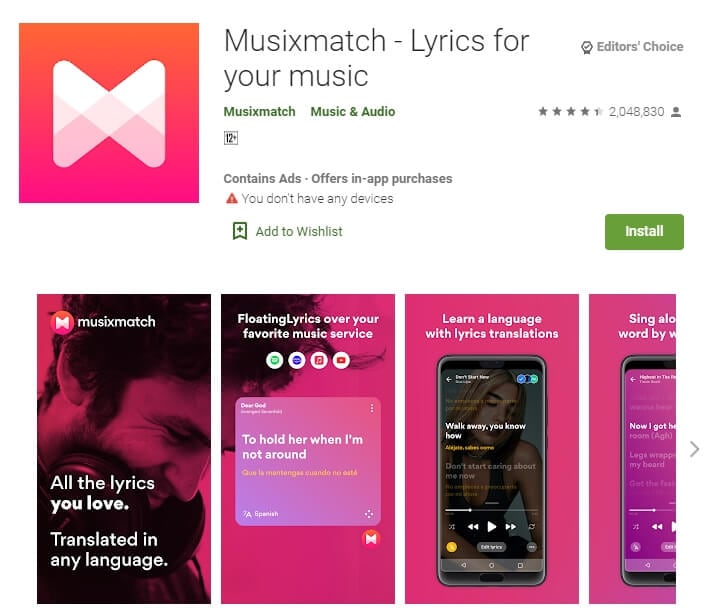 What is best is that, the track can be playing on any music streaming app, and the floating widget of MusiXmatch will display the lyrics in sync with the song being played. Lyrics will appear embedded in YouTube music videos, whether they be in portrait or landscape mode.

It can also translate lyrics in real-time, thus enabling you to learn a new language while doing one of your favorite tasks listening to music. You can get the lyrics and translation of any song playing around you with a single tap. You can also find your favorite song by simply typing a single line of lyrics of that song.

The app also contains allied information on the identified songs. You can be a part of this app's community and feed this database with music knowledge and information, lyrics and translations.

You can stream MusiXmatch on television via Chromecast, and the app is available on all Android wearable devices. A premium version of this app allows you to view lyrics offline, removes advertisements from the app, and enables a party mode where themes play in sync with the song lyrics.

The world of music is vast and dynamic. There are hundreds of music genres, thousands of songs in each genre and billions of recorded songs if we take into account songs from every country and language in this world.

Finding your favorite songs in this musical universe is nothing short of a treasure hunt, especially if you know very little of your coveted song( like just a tune, a jingle, a single line of lyrics, or you just heard the song for the first time).

To assist you in this hunt are the above song finder apps and lyric finders. Use them, and no song will be beyond your reach.

Thank you for your comment. We will review it within few days.
You May Also Like
10 Best Free Online Audio Normalizers