Download on the App Store
Get it on Google Play
Download
Download
Call us: +1-60-4343-8521
Mon-Fri 6:00 PM to 11:00 AM Pacific Time
International phone rates may be charged by your service provider
Filmora Video Editor
The best editor helps you easily edit business videos with powerful features.
Try It Free Try It Free

How to Recognize Songs on iPhone?

You listen to a catchy song or a tune you have never heard before and want to add it to your iPhone playlist, but you do not know any relevant details of that song to look for it online. What is the title of the song? Who sang it?

Now you can get all these details by just making the in-built iPhone music recognition feature listen to the song. Read on to know how to do that.

How to Use the In-built Music Recognition on iPhone?

In November 2020, Apple released the iOS 14.2 update for their iPads and iPhones. One of the features of this update was that it included built-in music and song recognition button that makes it easier for the user to recognize any song playing around them.

You just need to add the iPhone music recognition button to the Control Center menu and simply press that button when you hear a song that you like. You will then get all the information related to that song; title, artist’s name, and album title.

Here is how you add the in-built iPhone music recognition button to the Control Center:

Note: Make sure that you have the latest version of the iOS installed on your iPhone as this feature is not available on older versions. To check the running version, go to Settings -> General -> About, and then you will see the software version.

Step 1 - Open Settings> Control Center, and then tap More to scroll down.

Step 2- Tap the “+” button that is next to “Music Recognition”, and the iPhone music recognition button is added to the Control Center 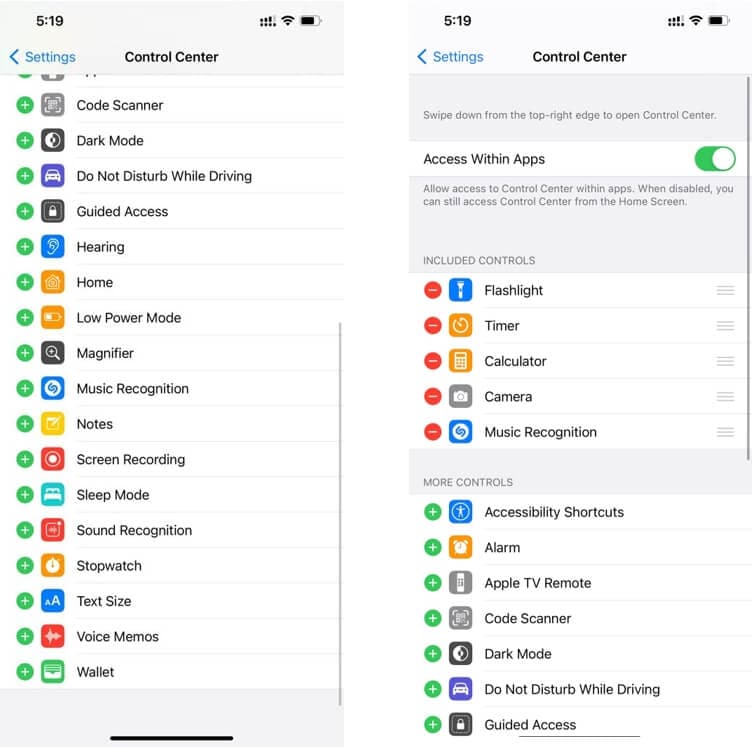 It is very easy to access and use this music recognition feature. If you have an iPhone that uses facial ID recognition to unlock, then pull down the Control Center shade by swiping down from the top right corner of the phone and tap the music recognition button.

If your iPhone has a home button, then swipe up to get into the Control Center menu and tap the music recognition button.

You will see the Music Recognition notification icon that shows which song is playing.

The iPhone will listen for around 10 to 15 seconds once you tap the button – and will attempt to identify the song in that time period.

This feature can recognize songs playing in your environment even when your headphones are plugged in.

YouTuber Ricardo Gardener has made a video showing how to use the iPhone Music Recognition feature step by step as well, enjoy!

How to Use Siri to Identify Songs by Humming on iPhone?

You can also identify a song on your iPhone by using its virtual assistant, Siri. Siri can recognize a song playing in your environment and even the song you are humming. This how you do it:

Step 1- Activate Siri. You can do it two ways; the first is by long-pressing the home button or Wake/Sleep button in iPhone X and the second is by the voice command “Hey Siri”.

Step 2- Then say, “Hey Siri, which song is this”. This starts Siri’s listening mode.

Step 3 - Hum the tune that you want to be identified and Siri will return with results after a few seconds.

Mike has shown us how he uses Siri to identify the song playing on iPhone, let's have a look!

If your iPhone or iPad is not yet upgraded to iOS version 14.2 then you would have to use third part apps to identify songs. Following are the two best iPhone music recognition apps that you can use:

SoundHound is one of the best iPhone music recognition app out there. It has some of the most useful features regards to song recognition that helps you get a complete music experience.

The standout feature of SoundHound is that you can have a song recognized in it by merely humming a short tune. This is very helpful when you don’t remember the lyrics of the song or the song’s title or who sang it.

The service is pretty quick meaning you can have songs and music identified in a matter of seconds. You will get all available details of the concerned song or tune and what more, you can also sing along to real-time lyrics in the app.

It also allows you to stream your playlists from other music apps like Spotify, YouTube and others. Your song search list is stored so that you don’t have to look for a song all over again if you have once searched it on SoundHound. This saves time and keeps your discovered songs organized.

You can use the app for The paid service of Shazam goes by the name of Shazam Encore and it costs $2.99.

It draws up all available information of a song you want identifying, from its huge database in a short time. There is also a lyrics feature that displays lyrics in sync with the song being played so you can sing along with it.

But these are regular features that you can find in any music recognition app. What gives Shazam an edge over other apps is the following additional features: offline usage and Pop-Up Shazam. You can use Shazam offline. It records the song offline, and later when you go online, it provides all the information about that song.

The Pop-Up Shazam is a unique feature that helps you identify any song that is played in your smartphone. It works with any app and is especially helpful when you are surfing social media and want to know about a song or background music you just came across on it.

There is also an Auto Shazam feature that works like “Now Playing” on Pixel devices. This feature works in the background and gives you song info notifications as it recognizes songs in your environment. The only drawback of this feature is that it doesn’t work offline.

How to Choose a Music Recognition App?

Version 14.2 has made it easy to recognize songs on your iDevices. But those who do not have it need a third-party app to do that job. You need to look for a good iPhone song recognition app, one that does the job to your satisfaction.

There are hundreds of such apps available on the Apple App Store, and you need to sift through them to get the best one. Following are the features you should consider while choosing the most appropriate app:

Most of the time, you come across unknown songs in noisy surroundings. It can be at a party or the supermarket. Your song recording can be interrupted by some loud noise like joyous shouts or announcements in both scenarios. Hence, it is vital that the music recognition app launches, listens and identifies in a few seconds before any interruption takes place.

Ideally, the app should recognize the song within a span of 5 to 10 seconds of launching.

As already been said, you are more likely to encounter an unknown song or tune you like in a noisy environment. Keeping that in mind, the song identifier app must be able to distinguish between the song you want to identify and the surrounding noise accompanying it.

The Trial and error method is the best way to determine which app does the best job in this case. Test the apps in a noisy environment before you decide which you will ultimately use.

Identifying a song title, the artists, the album it belongs to with nearly 100% accuracy is a must for any music recognition app. Besides that basic info, it must give accurate allied information like music videos, covers and trivia regarding the singer and the song.

Don’t bother yourself with an app that doesn’t recognize at least 8 of 10 songs it hears.

FAQs About Recognizing Songs on iPhone

It depends on what version of iOS you are running. If the version is 14.2 and above, you don’t need to install Shazam separately as it comes integrated with your iPhone software. The in-built music recognition feature of the iPhone uses the Shazam database, and it recognizes songs and tunes the way the Shazam app does.

If you are running an older version, you need to install Shazam separately if you want to use it.

iOS users who haven’t upgraded to the iOS 14.2 update will not be able to access the features

When the process is complete, you’ll see a “Music Recognition” notification banner showing you what song is playing. This notification appears along with all your other apps’ notifications in your notification center.

Your iPhone will only listen for 10 to 15 seconds after you tap the button. If it can’t identify a song in that period of time, you’ll see a notification saying a song wasn’t detected.

Thank you for your comment. We will review it within few days.
You May Also Like
10 Best Free Online Audio Normalizers