Download on the App Store
Get it on Google Play
Download
Download
Call us: +1-60-4343-8521
Mon-Fri 6:00 PM to 11:00 AM Pacific Time
International phone rates may be charged by your service provider
Filmora Video Editor
Capture and edit popular gameplay with fun.
Try It Free Try It Free

How to Pin A Message on Discord?

Like TeamSpeak or Skype, Discord is a chat app aimed at easy mass communication. Although it was made for gamers, it is readily used for communicating in offices, during projects, or for professional collaboration.

Even though it's straightforward to use, there are several Discord features that you may be unfamiliar with.

One such feature is called pinning messages. It is available to moderators, administrators, server owners, and other users who have permission to "Manage Messages" in various server channels.

It acts like a sticky note for Discord, making sure valuable information such as server rules do not get overshadowed by new messages even months after the pinned messages are first posted.

Today, we will go over how to pin a message on Discord for your desktop app on PC and Mac, as well as on your iPhone and Android mobile devices.

Part 1: How to Pin A Message on Discord Desktop?

If you want to learn how to pin messages on Discord desktop, follow these steps: 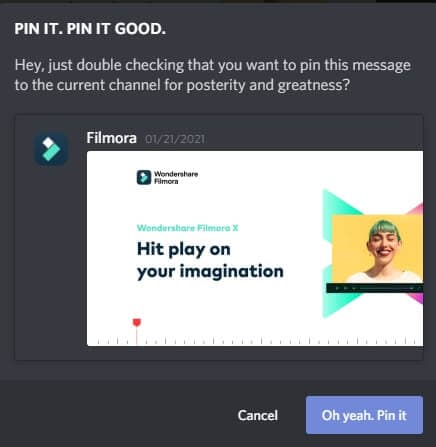 That's it! You have now learned how to pin messages on Discord for the desktop application.

But make sure you don't pin everything that might seem important at a glance — only pin messages that may have utility in the future.

Also, don't pin messages that are just important for you. In larger channels, prioritize pinning messages that will benefit most participants.

Part 2: How to Pin Messages on Discord Mobile App?

Pinning messages in the mobile app is very similar to how it is done on the desktop application. Do it by:

Part 3: How to View Pinned Messages on Discord

Part 4: How to View Pinned Messages on Discord Mobile

View your pins on the mobile version of Discord by:

You can only pin 50 messages in the pin box in Discord, meaning if you want to pin new messages, you will have to delete older ones to make space.

This may feel like a disadvantage. However, it makes perfect sense. Pinning messages is only for important information that must be used in the future.

Removing this limit and giving people free rein on the number of messages they can pin will eventually lead to too many pinned messages, defeating the feature's purpose.

Part 6: How to Delete Pinned Messages on Discord?

If something pinned in the past has become redundant over time, you can remove it from the pinned messages.

This will make sure your pinned messages do not stockpile over time, and there is space to add new messages important to the server.

To remove pinned messages on desktops:

To do the same for mobile devices:

Things to keep in mind:

Learning how to pin a message on Discord could be a little tricky at first, mostly if you haven't done so in the past and someone spontaneously asks you to do so.

However, the feature is pretty intuitive and straightforward once you get the hang of it.

The usefulness of pinning makes it very important for both old and new users as you can relay important information without having to go through tons of old messages.

Thank you for your comment. We will review it within few days.
You May Also Like
How to Put Emojis in Discord Status?

Animated logos engage users than normal logos and give a strong first impression. We start with the article with examples like the instagram animated logo and other social media, then give 5 ways to optimize logo animation.

Discord GIFs: How to Put GIFs on Discord - An Ultimate Guide

One of the easiest ways to create a discord gif is by picking the right GIF Maker tool for you. Find detailed information of gifs for discord with the below article.