Download on the App Store
Get it on Google Play
Download
Download
Call us: +1-60-4343-8521
Mon-Fri 6:00 PM to 11:00 AM Pacific Time
International phone rates may be charged by your service provider
Filmora Video Editor
Record & Edit Video Calls on Windows/Mac
Try It Free Try It Free

FaceTime for Android: The Ten Best Free Alternatives to FaceTime on Android

In the age of the global pandemic that was caused by COVID-19, social distancing is one of the best ways to prevent this infamous disease from spreading. Video chat apps allow us to keep in touch with our friends and family during these difficult times without jeopardizing anyone’s safety. Mac, iPhone, or iPad users don’t have to think much about which video chat app they are going to choose as FaceTime is both free and easy to use.

Android operating systems don’t come with FaceTime’s equivalent, which is the reason why their users have to find a video chat app that best suits their needs. So, in this article, we are going to take you through some of the best free FaceTime for Android alternatives.

Even though your friends who have iPhones cannot chat with you through FaceTime, there are still lots of video chat apps that are compatible with both iOS and Android operating systems.

The best part is that you don’t have to spend a single cent to be able to communicate with a friend who has an iPhone from your Android device. Here are the ten best free video chat alternatives to FaceTime on Android. 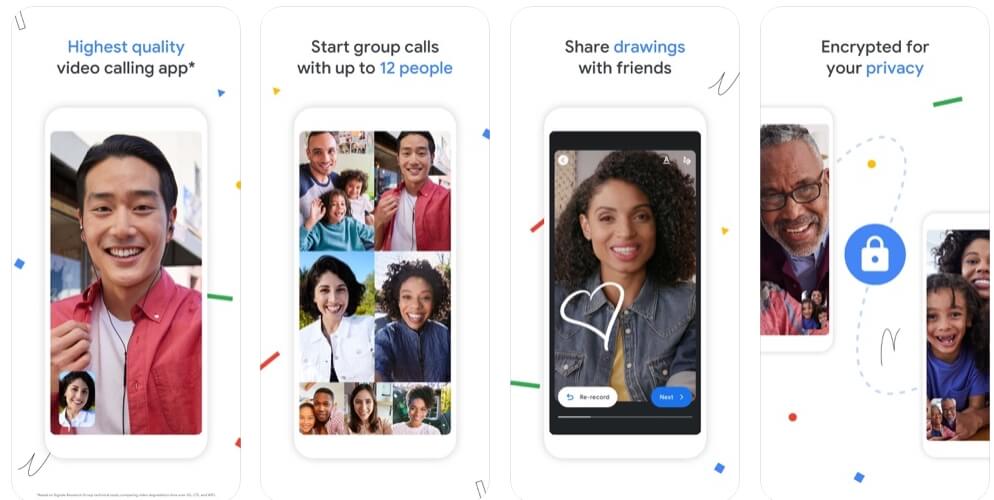 Even though Google Duo was launched just three years ago, it is easily one of the best alternatives to FaceTime, as you can use this app on both iPhone and Android phones or from a web browser. The app’s been labeled as Android’s official response to FaceTime, as it allows its users to receive calls even if they don’t have it installed on their phones.

Google Duo allows you to organize group calls with up to 12 participants or send video, audio or text messages. Sharing photos or making voice calls through Google Duo are also some of the options you will have if you decide to use this video chat app. 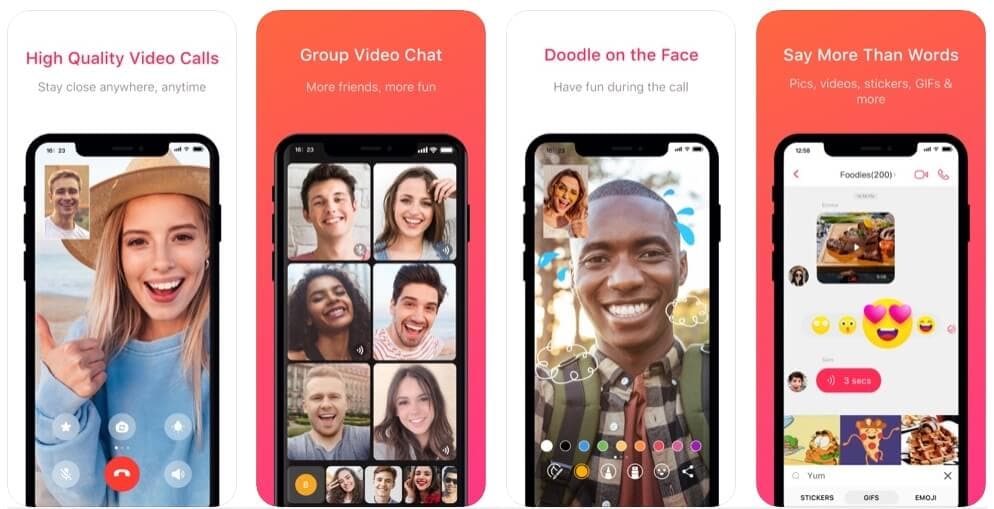 Users of this app can do much more than just video chat, even if they are using different types of Smartphones. JusTalk delivers HD quality of both voice and video calls on WiFi and 3G, 4G, and 5G networks.

The app also enables you to make group calls that have 50 or fewer participants or create groups that have as many as 200 members. What’s more, you can create doodles while the video call is still in progress, and you can record all of your conversations with a single tap. The app can be used to play games, send or receive entertaining GIFs and stickers, while the OutCall option allows you to make international calls at low rates. 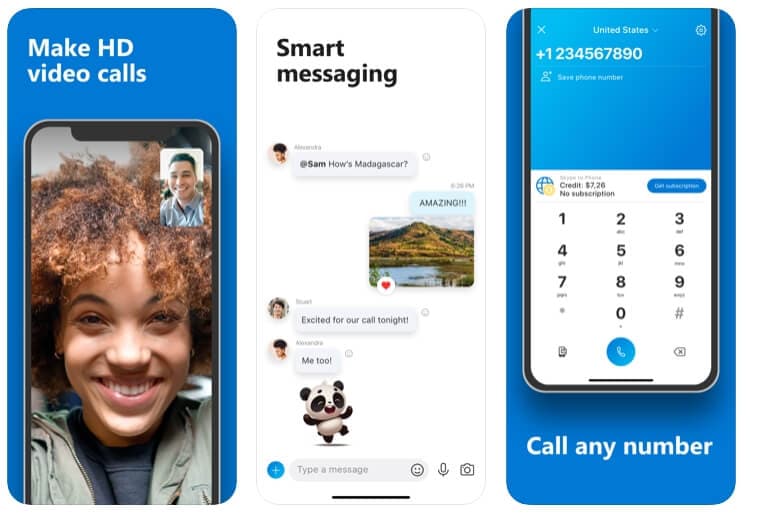 At the onset of the Coronavirus pandemic, the number of Skype’s users increased by 70% in a single month. This statistic alone speaks volumes about the app’s popularity, as millions of people choose to talk to their business associates or friends through Skype.

Besides being one of the most popular cross-platform video chat apps ever created, Skype is also remarkably easy to use, as you just need a webcam and a microphone to start a video call.

All Skype to Skype calls are free while calling landlines, mobile phones, or sending messages is only possible if you purchase Skype credit. Furthermore, the app offers the group call feature, although a single group call cannot have more than 24 participants.

With a user base of more than 210 million people, Snapchat is easily one of the best video chat apps for Android and iPhones. Besides giving you the option to video chat with 16 friends at the same time, Snapchat also offers the possibility to send video snaps or photos that disappear just seconds after you sent them to all of your contacts.

However, calling landlines or mobile phones that don’t have Snapchat installed is impossible, as you can only use this app to video chat with people who are already using it. Doodling over the video while the call is still in progress, applying or creating photo and video filters and discovering where your friends hang out are just a few among countless options Snapchat provides. 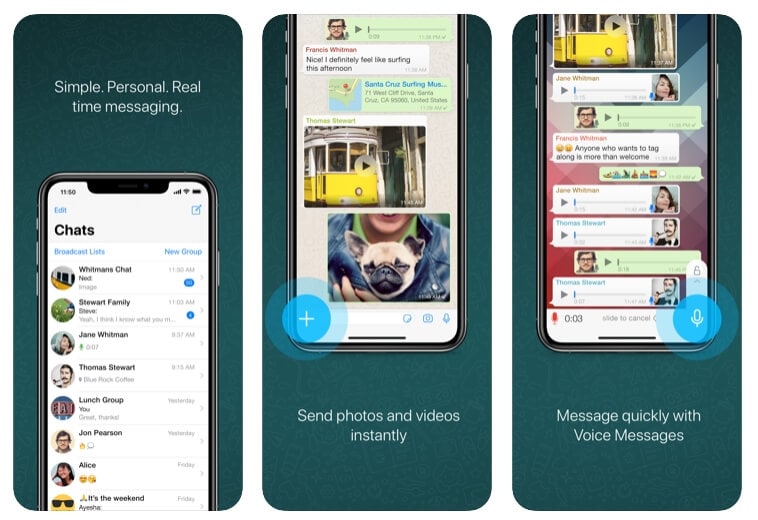 This is a simple and easy to use cross-platform messaging app that enables you to communicate with all your contacts either from your computer or from your Smartphone. Once you’ve installed the app, you can receive multimedia messages, start video and conference calls, or simply exchange text messages through chat.

However, you can only communicate with friends that already have WhatsApp installed on their devices, while calling landlines or emergency numbers with this app is not possible. WhatsApp features an impressive collection of GIFs and emojis that make all your conversations more entertaining, and you can also use the app to take photos or record voice messages. WhatsApp lets its users create groups that can have up to 256 members, which makes it easy to communicate with large numbers of people at the same time. 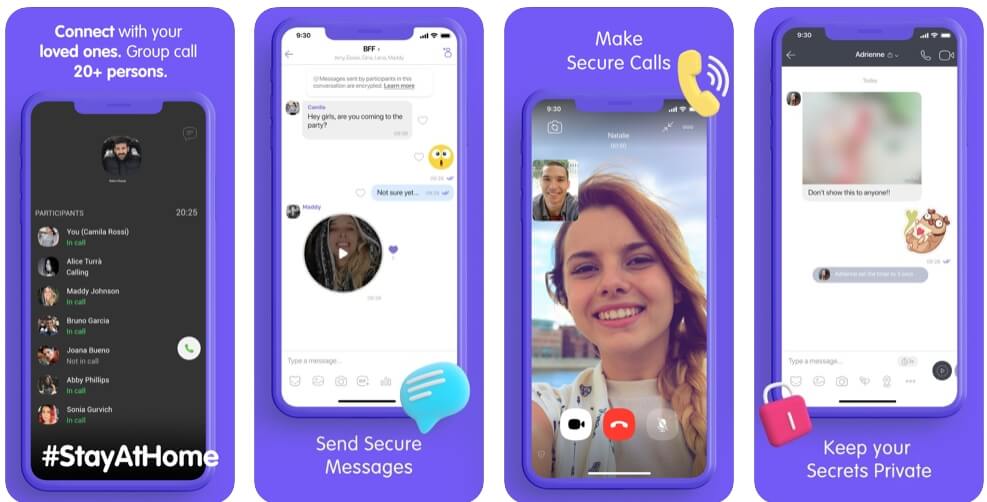 In case you are looking for a messaging app that keeps all your conversations perfectly safe, then Viber is a great choice for you because this app is equipped with end-to-end encryption. In addition to making video calls to your friends who are also using this app, you can also install Viber Out if you want to use this app to call mobile phones and landlines.

Furthermore, you can make group calls with up to 20 participants on Viber, although you must have Viber 10 or a newer version of the app in order to participate in group calls. The ability to send instant voice and video messages or quickly switch between video and audio calls are also the advantages you will have if you choose to install Viber on your Smartphone.

Facebook Messenger can be installed on any device that supports iOS, macOS, Windows or Android operating systems, and used to send text messages, start video calls or participate in group video chats. The app gains access to all the contacts in your phone and allows you to communicate with them regardless of the device they are using. You can record audio or video messages and send them instantly to each of your contacts. 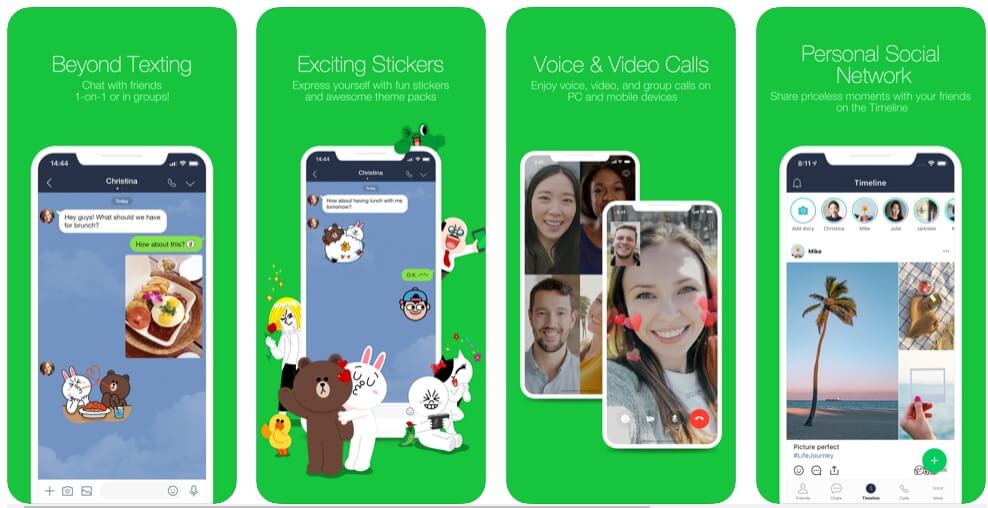 The fact that Line has 600 million users hints just how popular this cross-platform messaging app really is. In addition to free voice and video call options, Line also enables its users to participate in group calls with up to 200 people. Besides chatting, sending audio and video messages, stickers, or even GPS coordinates, you can also use Line as a social network.

The social networking features enable you to update your status on a daily basis or comment on posts your friends share on Line. In case you would like to make international calls to landlines and mobile phones you can use the Line Out that lets you connect with your friends regardless of where they are. Even though Line can be used for free, you should keep in mind that the app displays ads and offers in-app purchases. 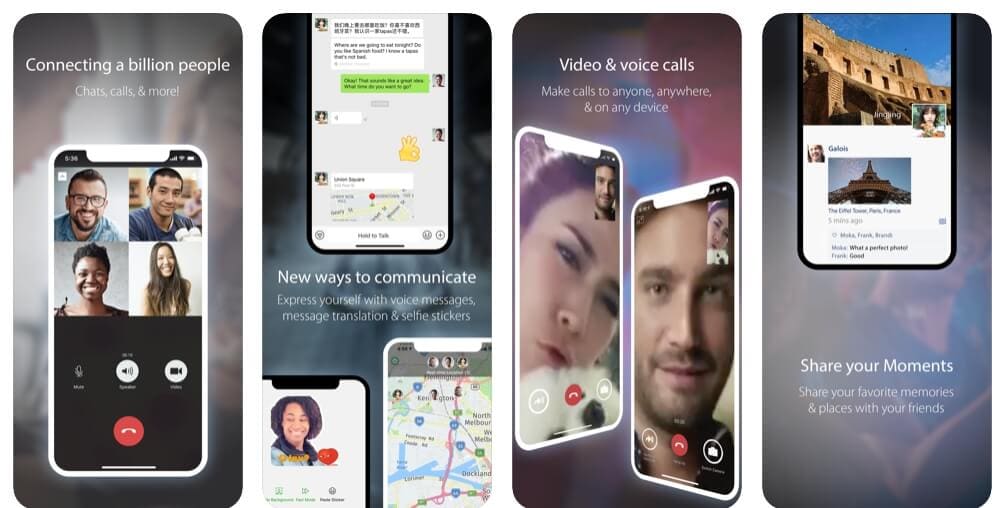 After nearly a decade since its initial release, WeChat has more than a billion daily users. You can video chat for free with all app’s users even if they are accessing WeChat from a computer or iPhone. Moreover, you can organize group calls with up to nine people or send photos, videos, or voice messages instantly to all your contacts.

WeChat is also a social media platform that enables you to share the highlights of your day through its Time Capsule feature or post photos and videos on your Moments stream. The app makes it easy to share your location with your contacts, as you just have to tap a button to send exact coordinates to a friend. 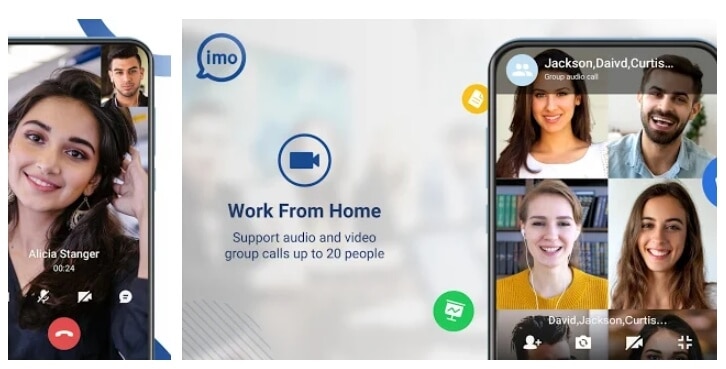 This is a simple app that doesn’t have much to offer other than basic video and voice call options. Even so, you can use imo to create video chats with up to 20 participants or group video calls with up to six people. The app enables you to send photos, videos, and all other types of documents to your contacts, but only if they already have imo installed on their device. You must install imo Out if you want to make international calls to contacts who are not using this app.

Imo displays ads, and you have to purchase the premium monthly subscription if you want to remove them and gain access to 25 GB of cloud storage.

Can an Android Chat with an iPhone?

Yes, of course, although you can’t use FaceTime, because the app is not compatible with the Android operating system. Installing any of the apps we featured in this article will enable you to communicate with iPhone owners for free, although they will also have the app through which you want to reach them installed on their smartphones. Some video chats also offer the option to call landlines and mobile phones, but this option is not free, and you must find out the rates for the destinations you want to call.

Finding the alternative to FaceTime won’t take too long, as there are so many different video chat apps you can use to organize conference calls or group chats. Skype, Facebook Messenger, or Google Duo are some of the most obvious choices, even though millions of people are using apps like WhatsApp, Viber, or WeChat to video chat with their friends and family. Which of the ten best free alternatives to FaceTime on Android do you like the most? Leave a comment below and share your opinions with us.

Thank you for your comment. We will review it within few days.
You May Also Like
Best Zoom Audio Settings for Getting Audio Quality in Zoom Meeting

Here are how to configure Zoom audio settings to get the best sound quality during a meeting.

Zoom Chat: How to Chat in Zoom Meeting?

Here are couple of useful tips and tricks on how to make full use of the chat feature that the software offers.

Here are some of the best free recorders for Zoom meetings you can use on a computer, a Smartphone or a tablet to record a zoom meeting without permission.