How to Add Camera Shake to Video in Adobe After Effects

So you've shot your video with good camera technique and shot it on a good camera; how can you make it look like you shot it on an old PXL 2000? Well, the answer is to add a little camera shake to the footage. If you've ever been to a theme park, then you've likely seen the effect of camera shake. Video camera shake can be a powerful tool for telling a story and creating an impactful scene. It helps to build suspense and make the video more realistic. This article will show you how to add camera shake to your videos using Adobe After Effects.

Why Do We Need To Add A Camera Shake Effect To The Video?

Camera shake is often mistaken for poor cinematography. It can enhance your video. For instance, if you're filming something like a car chase or any other scene where there's lots of movement and action, the inclusion of a camera shake can help make it more realistic.

A camera shake effect can be an excellent way of adding a sense of realism to your videos. Whether you're making a video that's meant to be taken as a real scene, such as one depicting a robbery, or one that's supposed to be shot in a documentary style, such as making a movie, you can use this as an effective tool. You can consider adding camera shakes to your videos due to the following reasons:

How to add camera shake to video in After Effects

When it comes to video editing, knowing how to make a layer shake in After Effects is a very useful skill. Using it correctly can add subtle motion to a static frame, emphasize an important object, and even make a character quiver in fear! In this tutorial, you will learn how to effectively use the wiggle expression to affect a layer throughout the Composition.

Step 1. Select the layer you want to shake from your After Effects file.

Suppose you have an image or video of an object and want to apply it to shake effect, then it is quite easy. Just follow the steps described below. 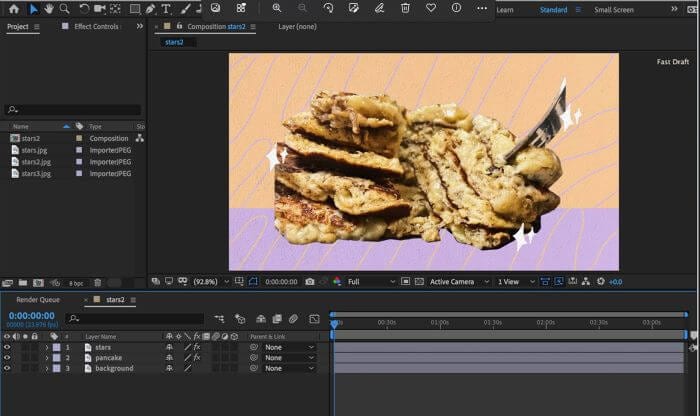 Step 2. Press the alt/option key, then click the stopwatch next to "position."

You are adding an "expression" to the timeline when the position text turns red, and you begin typing. Using a coding language adapted from javascript, you can apply complex motion to layers.

By pressing the alt/option again on the stopwatch, you can edit your expression anytime-or by clicking the arrow beside "position" and then double-clicking the text in the timeline.

In this expression, the first number indicates the frequency of Wiggle -- basically, how quickly it appears to tremble. Its amplitude is the second number, which indicates how far it moves. The numbers are adjustable as you wish. Layers will shake dramatically but slowly when they use Wiggle (2,40). The "Wiggle (10,3)" command makes a layer move quickly without too much movement in one direction.

Step 4. Adjust the frame rate of your Composition.

In order to make the overall effect more "choppy," you can reduce the frame rate of the video by going to Composition> Composition settings. After Effects uses a frame rate of 24.5, you can go as low as "8" if you want a choppy feel.

Your entire Composition will become choppier if you reduce the frame rate, so it might not be worth it if you have other moving elements in your Composition. Only adjust the frame rate of the layer containing the wiggling object if you want it to affect that layer.

● We hope that this tutorial gave you some new ideas for making your videos more interesting for your audience. It's easy to add camera shake to your videos in Adobe After Effects. It's a matter of getting all the right details right—that means it's a matter of knowing all the right settings and controls, which we detail above. With this information and a little practice, you'll be able to add that cinematic flair to your video footage in no time.