Download on the App Store
Get it on Google Play
Download
Download
Call us: +1-60-4343-8521
Mon-Fri 6:00 PM to 11:00 AM Pacific Time
International phone rates may be charged by your service provider
Filmora Video Editor
Cool Anime Girl Names For You
Try It Free Try It Free

The dedication in anime goes even beyond the lively visuals and complex plotlines. You will find powerful and spunk anime girl characters leading the show. Not to mention the unique anime girl name that is often linked to the characters' roles in the plot, values, or personality. These interesting names with deep meanings have been a focus of attention for many anime fans.

From adorable and cool-sounding names to sweet names with spiritual meaning, there are all kinds of anime girl names. Let's look at some fun cases where a character's name is just as necessary as any other information to disclose their nature and purpose. 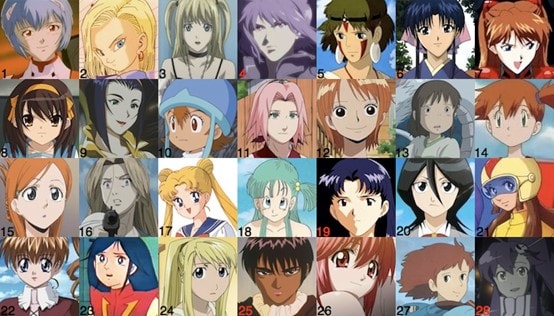 Here we sorted out 26 cool anime girl names for you. They are listed in alphabetical order:

Asuka is a Japanese anime girl name which means tomorrow; smell, perfume, collectively its smell of tomorrow. While perfume gets mentioned as the gods' poetry, the appeal of its magical language remains mysterious and fragile. Perfume, smell together with tomorrow gives all the positive feelings which a character portrays in the series.

2. Bashira: joyful and a predictor of good news

Bashira is a Japanese anime name that means joyful and a predictor of good news. Being an anime girl character, this name adds a translation of her appearance and the purposes of her character in the series. We agree that anime is not for everyone since their deeply planned names always help people get the unclear meanings and hidden purposes of characters.

Chika is a popular feminine Japanese anime name. It can be written with the kanji characters (chi), meaning thousand, wisdom, intellect, or scatter combined with (ka), meaning "flower." This name gives us the concept of a strong girl, who can be both; strong girls with delicacy.

Its origin is Japan; Dai is a female-given name that is pronounced dah-ee. Dai means "great; to shine," and it is of Japanese and Welsh origin. Greatness has always been everyone's preference; anime girl characters have also been portrayed as goddesses many times.

5. Erza Scarlet: the gift of God

According to the name and its meaning, Erza played a very restricted role, and following the rules is all she wanted. Erza means the gift of God; this term is often termed as enhanced wisdom, knowledge, and faith.

Fujiko means Wisteria which is a name of a flower that perfectly portrays the feminity of a girl and strength.

Gizmodo is a dark Japanese name that means black clover. The anime girl characters are powerful idols who can deal with all kinds of negativity with their dark sides.

Haruko means the spring-born, which can be pretty colorful. With this vibrant personality, anime girl characters never fail to spread positivity among their fans.

Anime characters always show bravery, and being courageous is their constant middle name. Isamu is a Japanese name that is perfectly picked for girl characters whose series revolves around bravery.

Junko a Japanese name chosen for an anime girl who is pure and genuine. A child who can serve their fans with purity and kindness.

Kamiko, the Japanese-oriented name for a girl character, elaborates that a little goddess can be a lot. Their kind little hearts can be an example for their fans.

Lina, the palm tree, played support for others like the palm tree, huge and helpful. This Japanese name, with its meaning, is enough strength for viewers.

Masami is a Japanese girl term that represents "to become beautiful." Anime girl characters always successfully show how they pull them back despite all of the chaos around them.

This female Japanese name has a lot wider meaning than its character, but somehow it was dreamily selected. Natsuki, which means vegetables, green, and moon, every word has its beauty. Their bright explanations can also brighten anyone's perspective.

The name Ohana is an Armenian origin as an anime girl's name. Ohana means God's grace gift. God's grace is accessible today and tomorrow to those who have damaged hearts but are beautifully pulled back.

The name means "purity." More accurately represents the lotus flower's nature that grows on mud, but the lotus bud grows high through mud and blooms continuously. Anime girl's names are wisely chosen according to their characters.

Qualia originated from Japan speaks for itself; the angel means anime fans can experience their life turning into a good point.

Reiko, the Japanese name picked for the anime girl character, portrays a lovely-hearted child and a savior of humanity. These characters can tremendously leave a big impact on their fans' lives.

A flower of several trees is cherry blossom, also known as Sakura and Sakura, an anime girl character in Japanese.

It's a Japanese-oriented anime girl name that means happiness child. Through this anime character, fans can have more than an open doorway to enjoy this greatness;

The Umeko means the Plum is again a Japanese name means the Plum, which implies something desirable. These girl anime characters are a true example for fans who can spread positivity.

Veronica is an old Greek-originated name, which means victory. Anime girls are powerful girls who can make sure of the victory after every conflict regardless of gender.

The name Wakana is mainly a Japanese female name that means harmony, which gives the concept of completeness. Anime girl characters are the whole pack of providing harmony and peace.

Zoe is a word that comes from the Greek language, which means life. This life can give an ability to learn and to assist others and make the fans' life stress-free.

Yuriko is a Japanese girl name that means Lily, which gives the feeling of Gentleness. Anime girls can be strong yet the most delicate characters.

This anime girl name can give you inspiration for being an expert and perfect. This Japanese-originated name can be the ideal impression of strictness.

What a Cool Anime Name Can Make a Difference?

An anime name says a lot about the character and its personality. While creating anime names, animators aim to spot a light on the individuality of the character with connections to their past.

Anime names are full of style, strong sense, and unique sounds. These names are always cool; whether for girls or boys, they're used in adventurous, creative, and romantic anime series. All in all, anime girl names can be a true inspiration for anyone, regardless of gender

So, which anime girl name sounds perfect for your kid?

Thank you for your comment. We will review it within few days.
You May Also Like
Best 10 Anime Series of All Time | Watch Anime Online