Download on the App Store
Get it on Google Play
Download
Download
Call us: +1-60-4343-8521
Mon-Fri 6:00 PM to 11:00 AM Pacific Time
International phone rates may be charged by your service provider
Filmora Video Editor
Create and Edit Videos Easily and Quickly
Try It Free Try It Free

How to Make a Video on iPad Pro?

It has been a couple of years since the first iPad Pro was released, and within a relatively short period of time, these fascinating gadgets have taken the market by the storm. Their processing power and their 11 and 12.9-inch liquid retina displays make them a popular choice among the fans of Apple products. However, iPad Pro still runs on the iOS operating system, which means that you can’t really install desktop-based video editing apps like Adobe Premiere Pro or Final Cut Pro. That is why, in this article, we are going to show you how to edit videos using the alternatives to professional video editing software products.

How to Edit a Video on iPad Pro?

The process of piecing together a video isn’t much different on any device that is capable of supporting a video editor that offers at least the basic video editing tools. On the other hand, the range of tasks you’ll be able to perform depends on the device’s graphics card, its processing power and numerous other technical features that enhance its performance. That’s why you must familiarize yourself with your iPad Pro’s capabilities before you embark on a video editing journey.

iPad Pro is equipped with a camera that can capture 4K videos at 30 or 60fps, as well as 1080p HD videos. It also features cinematic video stabilization option, and the support for slow-motion videos recorded in 1080p and 120fps or 720p and 240fps. The time-lapse option also comes with the video stabilization option and the camera has a continuous autofocus feature that enables you to keep your shots sharp at all times. It is quite clear that iPad Pro’s camera is capable of producing videos of the highest quality and that you can use it to record all the footage you intend to use during the video editing process.

Besides the device’s camera, you can also import the videos you recorded with your Nikon or Canon digital cameras. To connect your iPad Pro to a DSLR or any other type of digital camera you’re using to record videos you are going to need a USB-C mini USB cable. In case your camera doesn’t have a mini USB port, you can purchase Apple’s USB-C to SD Card Reader for $39.00. Once you’ve managed to connect the two devices the Photos app should launch automatically and you should just proceed to adjust the properties of the file transfer from the Import tab.

The footage you want to include in your video can also be recorded with an iPhone or Android device, but the processes of connecting these devices to an iPad Pro vary. The fastest way to connect a Smartphone and an iPad Pro is probably via Bluetooth, although if you choose this option, the transfer of the high-resolution files may take some time. After the file transfer is completed, you should organize the footage, so that you don’t have to browse through hundreds of video files each time you want to import a new clip into your project.

Which video editing app you are going to use to edit videos on an iPad Pro, depends on a number of factors, that range from how complex the video you’re trying to make is to how well a particular app performs on iPad Pro. We recommend the LumaFusion (click to learn the difference between Lumafusion and Final Cut Pro X) app that requires very little previous video editing experience while offering a wide range of video editing options. 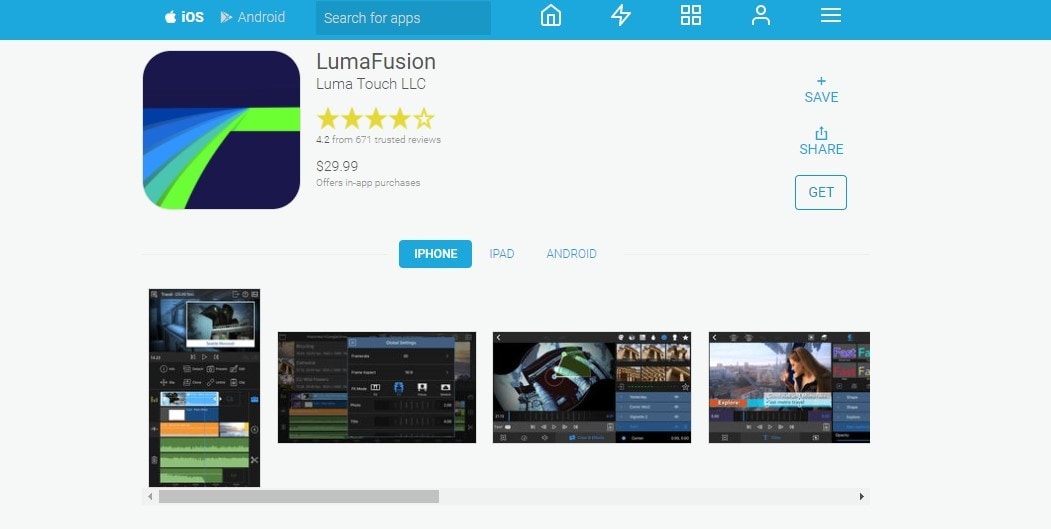 You can buy LumaFusion at the App Store for $29.99, and you can make in-app purchases that grant you access to huge stock footage libraries, which can be quite handy if you don’t have the music for your soundtrack or if you’re missing a couple of shots and you can’t go back to the location to shoot additional footage.

Editing a Video with the LumaFusion App on iPad Pro

Assembling a video in LumaFusion isn’t much different than in any other non-linear video editor, even though you may need some time to get used to the app’s interface if you haven’t used it before.

This is not the only way you can import videos into projects in LumaFusion, because the app offers a variety of importing options.After you’ve added all the video and audio files to the Media Panel, you should drag and drop each file to the preferred location on the timeline.

LumaFusion has three video tracks where you can place photos, graphics, videos, and titles, as well as three audio tracks you can use to add voice-overs, audio effects or music to your videos.At the moment the app can’t sync the audio and video files that were recorded separately, so you have to do that bit manually.

The next thing you need to do after you’ve added all the video and audio files to the timeline is to remove all the footage you don’t want to keep in the final cut of the video. You can either use the Trim or Split Clip tools to complete this process and then make sure to delete all the unwanted material from the timeline.

When done, you should double tap on any clip and a new window will pop up where you can crop or reposition a clip, adjust its playback speed, edit its audio or perform color correction.

There are seven different categories of color correction tools you can choose from, so you should select presets that allow you to enhance colors, sharpen the image or explore the app’s keying options if you are working with the green screen footage.

Furthermore, LumaFusion offers a lot of sound effects that let you compress the audio file, eliminate peaks or distort sounds. In case you’re working with audio files you recorded separately from the video, you should remember to mute the audio in the video files. You can do this by double tapping on the video clip, selecting the Audio option and dragging the soundbar that is displayed across the video’s waveform all the way down to zero.

The app contains a rich selection of transitions you can add between clips, so in case you want to make the cuts between scenes a bit smoother you should consider trying different transitions until you find the one that matches the style of your video perfectly. The LumaFusion Titler enables you to produce multi-layered titles that contain images, fully customizable text and shapes. What’s more, you can animate titles you create in LumaFusion by applying visual effects or motion transitions to them.

Besides exporting videos, you can also export audio files only, archive projects or create a screenshot of the frame that you want to use as the thumbnail of the video. The export process in LumaFusion takes place slightly faster than real time, which is one of the reasons why this app is an excellent choice if you want to edit your videos on an iPad Pro. In addition, you can export your projects to YouTube or Vimeo directly from the app or save them to a cloud storage service like OneDrive or Dropbox.

Staying mobile is often not easy if you spend a lot of time in the editing room, but you can solve this problem by installing the LumaFusion app on your iPad Pro. Besides reducing the weight and size of the equipment you have to carry with you whenever you need to edit a video on the go, you can also use a stylus with your iPad Pro if you want to draw graphics you use in your videos.

Are you interested in Lumafusion? Read this article if you want to learn more: Lumafusion for Mac: Install It or Get Alternatives.

Thank you for your comment. We will review it within few days.
You May Also Like
8 Best Video Animation App for Android/iPhone/iPad [2023]

If you are a iPad or iPhone user then the article below can be helpful for you in selection of best supportive GIF converter applications.