Download on the App Store
Get it on Google Play
Download
Download
Call us: +1-60-4343-8521
Mon-Fri 6:00 PM to 11:00 AM Pacific Time
International phone rates may be charged by your service provider
Filmora Video Editor
Best Video Editng Tool for Beginners and Pros
Try It Free Try It Free

A video script template is a document that highlights how a video script will have to be written. It incorporates the message and narrative of the project.

Part 1: What is Included in a Video Script Template?

A video script template should include several steps to be effective both for the reader and other people working on it. For example, you should be able to write a brief of the video, so it is easier to turn the message into a pleasant story to follow. Next, use adequate language, so your audience understands it clearly, as well as keeping it concise and to the point. Then, gather your actors and other staff to read and re-read the script a few times to make it run smoothly. And last, change anything that doesn't sound good to your ears on the script.

The first thing that might come to mind when writing a script is dialogue and then the visuals. With this template, you can do just that. You have two separate columns for visual instructions and another for audio that might include narration, music cues and spoken dialogue. This separation makes it easier for the writer to understand when one column is intertwined with the other, resulting in fewer mistakes. This template's only limitation is that it might not be apparent when the visuals should pop on the screen with so many references to get distracted with. For that is crucial a clear understanding of what is written and good communication with the team. It is mainly used for short videos. 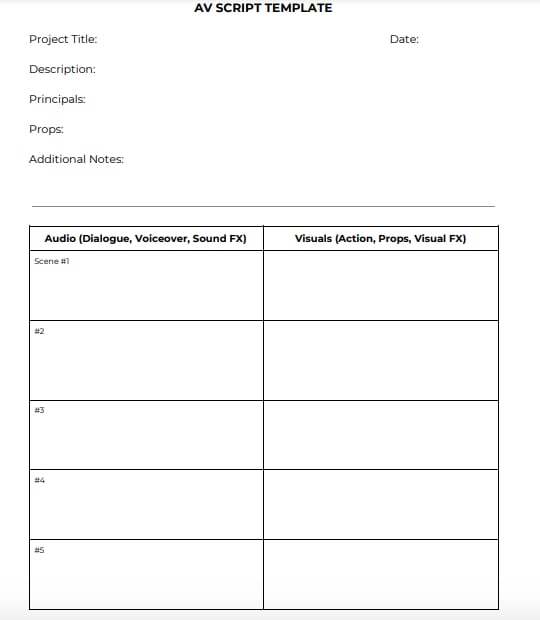 The goal of the structured script is to be easily understood even if there is no specific dialogue in it. In a situation like this, it is essential that the editing is organized. Start with an open statement, followed by key points and scenes, and keep the viewers engaged throughout. Like any other script template, the structured script can be thought of as an outline, but unlike others, it doesn't spell out the words for you but gives you video clues. The main difference when delivering the video through a structured script template is the tone used, making it crucial when conveying a coherent outline. This template is better used when the video that you want to shoot is complex. 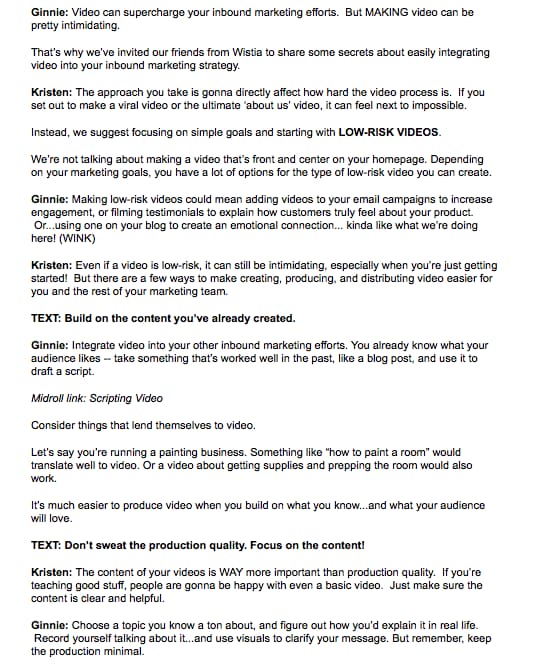 If you want to create a video where someone is conducting an interview, then this template is the best you can find. Unlike other script templates, when it comes to an interview, you are not writing down every piece of dialogue. But instead, you have to design questions that will make the person being interviewed respond with the answers you want in your video. That is the challenging part of writing something like this. You have to make the interviewee say the right message every single time.

One way of doing that is to reverse engineer your questions, so write down the answer you are looking for and work from there. Those are called target answers, and they need to be transformed into questions in your video. 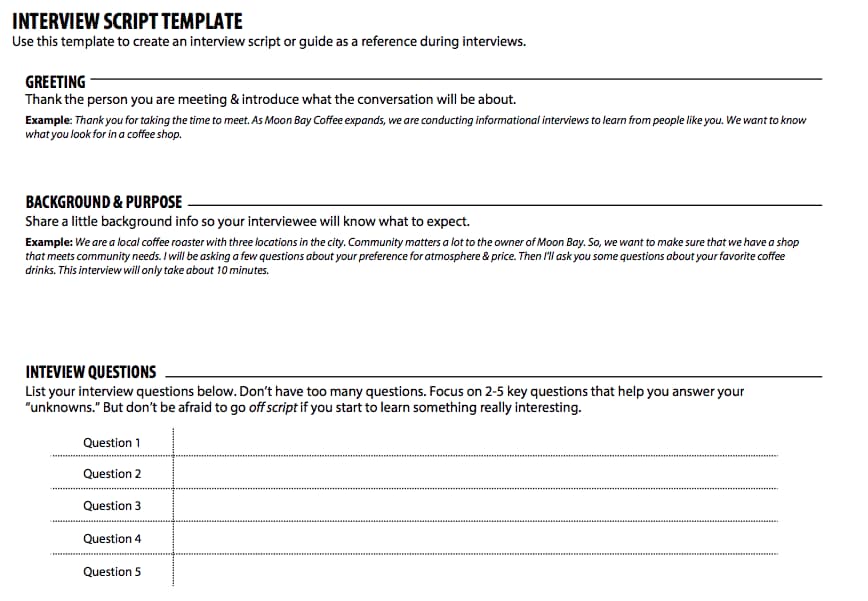 This template will help you visualize the whole process before the video is made and plot the narrative accordingly, and is extremely helpful with the transitions between scenes.

The trick here is to make the template clear and easy to understand for everyone involved, which can be pretty challenging as storyboard scripts have, in general, several plot lines and dialogues to follow. 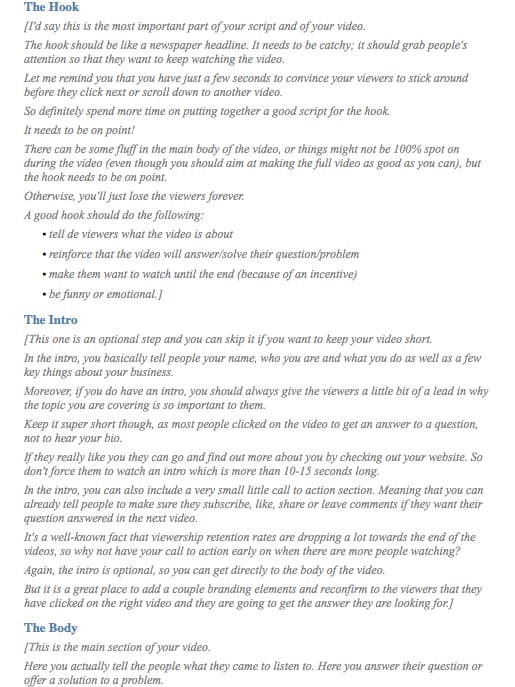 In this video script template, we highlight the outline of the script for easier visualization. It doesn't have as many options as other scripts, but it will help you work on more straightforward projects.

In this script, the elements outlined are the introduction, conversational tone, unspoken actions by the narrator, natural transitions, and comprehensive descriptions of characters and settings.

This template serves people that want to advertise services that their companies or third-party companies wish to promote. Its quick and efficient transitions make it look accessible for the viewer and right to the point. There are many templates for service ads, but this is a simple one to use. 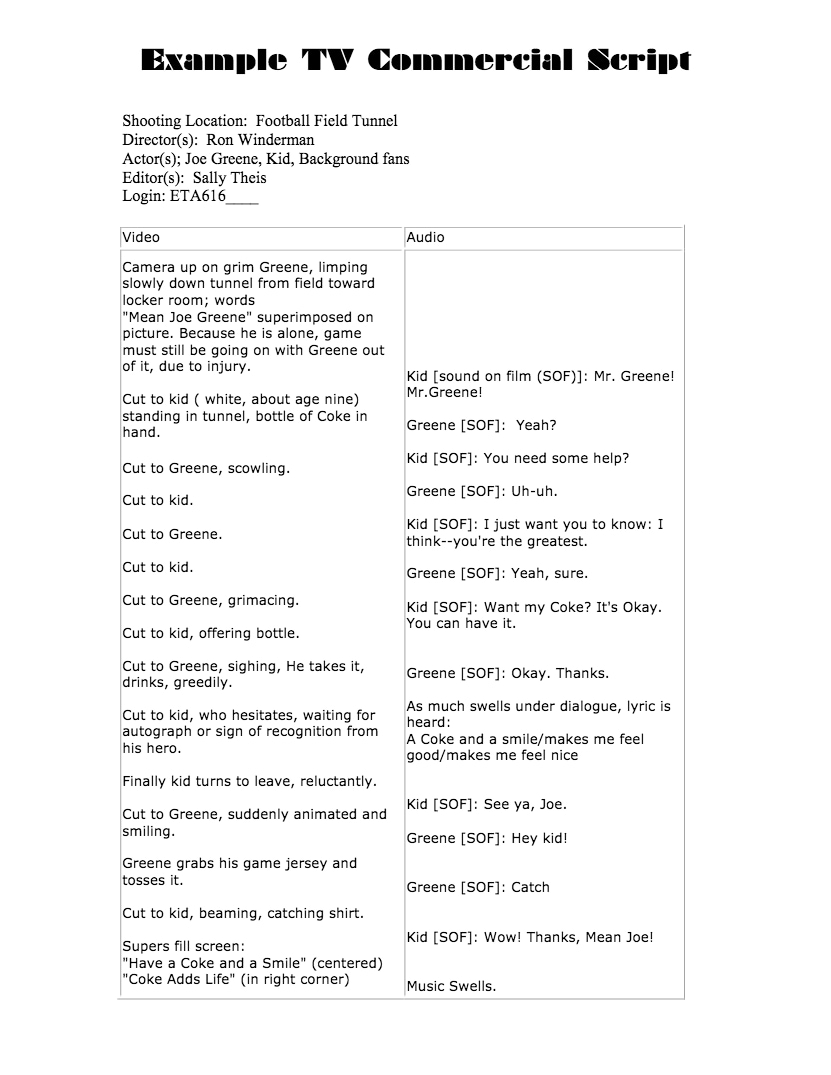 Part 3: How to Start a Video Script?

After you have chosen what template is more appropriate for your needs, you will have to start writing your script. Here is a step-to-step guide to help you.

Step 1: The best way to start is to write a concise text of the script's expectations, along with its characters and main scenes that you want to highlight.

Step 2: Write an outline with the brief that you wrote. In this step, you will have to be more focused on what every scene needs and when.

Step 3: Introduce the subject of the script at the beginning. This will hook your viewers from the start, and they will engage more quickly from that point on. Of course, the people working with you must also understand the script, so their performance is good and accurate.

Step 4: Write the script, but make it concise, as it is still a script and not a manuscript. Make it objective and to the point.

Step 5: Reading along and making the right tweaks is essential for a good video script. It is also a way to reveal flaws in your work and avoid upsets while you are already shooting the video and don't want to go back to the drawing board.

1. What are the types of video scriptwriting?

There are a few, but the main ones are the Audio/Visual script. This script will help you visualize the scenes while reading and seeing the cues to the video side by side.

The Storyboard video script allows you to write scripts from animation to youtube videos and other visual content, for example, feature films, video games, or short web series. And promotional and advertising scripts. Those tend to be shorter and to the point, requiring less work because of the simpler plot lines and dialogues.

That depends on the length of the video and the purpose of the video itself. In general, for a 2-minute video, you are required to write around a 240-word script. For a 10-minute video, your script will have to have around 10 to 15 pages. An average speaking rate is around 130 words per minute, making a 1m minute speech about 1300 words. You will have to bear in mind that these are only guidelines, and a lot more is involved when scripting a video to shoot.

In order to write a video script quickly, you'll have to make use of templates as they are designed to make you write the right things at the right time and place. There are many templates available, but with these, you'll be able to accomplish almost any type of work that comes your way.