Download on the App Store
Get it on Google Play
Download
Download
Call us: +1-60-4343-8521
Mon-Fri 6:00 PM to 11:00 AM Pacific Time
International phone rates may be charged by your service provider
Filmora Video Editor
Best Video Editor for Editing Home Videos
Try It Free Try It Free

Mothers nurture and educate us, but more importantly, they love us unconditionally. They guide us and support us and never expect anything in return, for all the efforts they’ve invested in helping us make our dreams come true. Showing them, every once in a while, just how much we appreciate and love them is the least we can do to express our gratitude for all attention and assistance we received along the way.

Finding a meaningful Mother’s Day gift in 2021 is as difficult as it ever was because most moms don’t want anything else than to know their children care for them. Spending time with our mothers may be the most valuable gift we can give them, so in this article, we are going to take you through ten songs that are going to make Mother’s Day 2021 a bit more special.

You may also like: How to make a greeting video for Mother’s Day

Making a video for Mother’s Day celebration but don't know how to start? In my opinion, you can try the video editing software Wondershare Filmora, which is easy to use yet powerful enough.

You can add subtitles and titles, record your voiceover to show how much you love her, and add some special effects and transitions to the video cooler.

The time we spend with our mothers is priceless for so many reasons and music can be a great way to create a memorable and magical moment that shows your mom how you really feel about her, so let’s take a look at ten best songs that are going to put a smile on your mom’s face.

Spice Girls are probably one of the most influential British pop bands in recent music history. The group was formed in 1994 and soon after it gained worldwide fame with a hit single ‘Wannabe’ and its first album ‘Spice’. A pop ballad titled ‘Mama’ written by Spice Girls, Matt Rowe and Richard Stannard in 1996 became the band’s fourth consecutive number one single in the UK, soon after its release. The song was inspired by the experiences Mel B had with her mother during her teenage years, and it reflects the belief that her mother was, in fact, her best friend. The lyric ‘Every little thing you said and did was right for me’ captures the mood of the song perfectly and sends a powerful message to all girls that sometimes all you should do is listen to your mother.

Despite being a heartfelt ode to maternal love, Goodbye’s (The Saddest Word) from the 2002 album ‘A New Day Has Come’ received only modest critical acclaim. The Dion’s performance as well the song’s lyrics tell a touching story about a mother’s love for her child. The deeply emotional tone of the track is accentuated by the poignant lyrics such as: ‘Now I know, there is no other, love like a mother's love for her child’. The song was the result of Dion’s second collaboration with Robert John ‘’Mutt’’ Lange and his wife Shania Twain, and today it is one of the most beautiful pop songs about mothers ever written.

Since 2003, this classical crossover band has achieved enormous success around the globe. Their debut album titled Il Divo was first released in the UK at the end of 2004 and in the US a couple of months later. ‘Mama’ became the album’s third single and one of the band’s early hits.

The song’s chorus: ‘And I'm sorry it took all this time to see, that I am where I am because of your truth’ summarizes the feelings of a young and rebellious son, who found his way in life because of his mother’s love and support. This emotionally charged song is a perfect soundtrack for the time you spend with your mom on Mother’s Day.

Every moment we spend with our parents is precious because it passes so quickly. One day our children are toddlers playing in the backyard, and the next they’re graduating from high school. These fleeting moments become some of our fondest memories. Taylor Swift’s ‘The Best Day’ is a collection of memories from early childhood to adulthood, of small and seemingly unimportant things the inevitably become the reason why we love our parents so much. The lyric ‘I hug your legs and fall asleep on the way home’ is so charming and evocative of the warmth of a mother’s love. Reminiscing with your mom while listening to ‘The Best Day’ may turn this year’s Mother’s Day into an unforgettable memory.

Those of you how to like to listen to R’n’B have probably heard of this iconic band that was at the peak of its fame in the mid-90s when their platinum single ‘A Song For Mama’ was released. This downtempo track was a major success, finishing at the number 30 on the U.S. Billboard Hot 100 year-end chart. More than twenty years later, ‘A Song For Mama’ is still one of the best R’n’B tunes ever created that professes a son’s love for his mother. The lyric: ‘You were there for me to love and care for me when skies were gray’, illustrates the significance of the love and support mothers give to their children in the times of hardship.

Becoming a person we are today would be impossible without the help of our parents. Lauren Alania’s ‘Like My Mother Does’ celebrates the importance of the role mothers have in the lives of their children. The words: ‘I'm so thankful for her guidance, she helped me get this far’ reflect how supportive and caring a mother is and that we all need someone to steer us in the right direction from time to time. This ballad, released in 2010 was also Alania’s debut single, and a year after the song was released she performed the song on the American Idol in front of millions of fans across the U.S. It is currently one of the most popular country music songs of all time that portrays the tenderness of maternal love.

Some moms are so great because they know how to be friends with their children. The Meghan Trainor’s ‘Mom’ is a song is about such a friendship and love that a child feels towards a mother. The lyric:  ‘But ain't nobody got a mom like mine her love's 'til the end, she's my best friend’, highlights the deep affection a child feels for its mother. ‘Mom’ was featured on Trainor’s second studio album ‘Thank you’ and it is an uplifting and inspiring song that explores a profound connection between a daughter and her mom. Even though the song was released only a couple of years ago, it has already gained the status of one of the best pop songs about mothers ever written.

Not all heroes wear capes, walk on the moon or have millions of fans. Some heroes take good care of cheerios, read bedtime stories or just smile tenderly. Jamie O’Neil’s ‘Somebody’s Hero’ is about all the little things mothers do to make their children happier and acts of kindness that make them the true heroes of the modern world. Sometimes we forget that being a mom is a difficult job, and we take mothers for granted. O’Neil’s song emphasizes family values through lyrics such as ‘A hero to her daughter in the wedding dress, she gave her wings to leave the nest’. More than ten years after its release, ‘Somebody’s Hero’ is a country music classic that is admired by people from all corners of the world.

9. Louis Tomlinson – Two of Us

Losing a mother is one of the most painful experiences in life. Tomlinson’s ‘Two of Us’ is about moving on in life after such a traumatic event and embracing the fact that our parents want us to live a life that would make them proud. The song’s chorus ‘But you once told me, don’t give up, you can do it day by day, and diamonds, they don’t turn to dust or fade away’ stresses how important it is to continue growing even when our parents are no longer with us. ‘Two of Us’ embraces an optimistic approach to life and suggests that our parents continue living through our actions.

After nearly two decades ‘I hope you Dance’ is still among the best country songs about mothers. Its opening lyrics: ‘ I hope you never lose your sense of wonder, you get your fill to eat, but always keep that hunger’ set the tone of the entire song. The pace of our lives, makes us forget about the well-being of those who helped us find our way in life. ‘I hope you Dance’ is a wonderful reminder that mothers should also dance and ‘never settle for the path of least resistance’. Being your true self, finding joy in life and growing perpetually is equally important for both children and their mothers because we can’t be truly happy if our parents are struggling.

Tutorial: How To Make A Video for Mom With Her Favorite Song

As I said before, you can make an exclusive video for your mom this Mother’s Day. To make a special Mother’s Day video, you’ll need:

In the following part, I’ll show you how to make a Mother’s Day video with Filmora. If you haven’t installed Filmora, click the download button below to try the trial version. 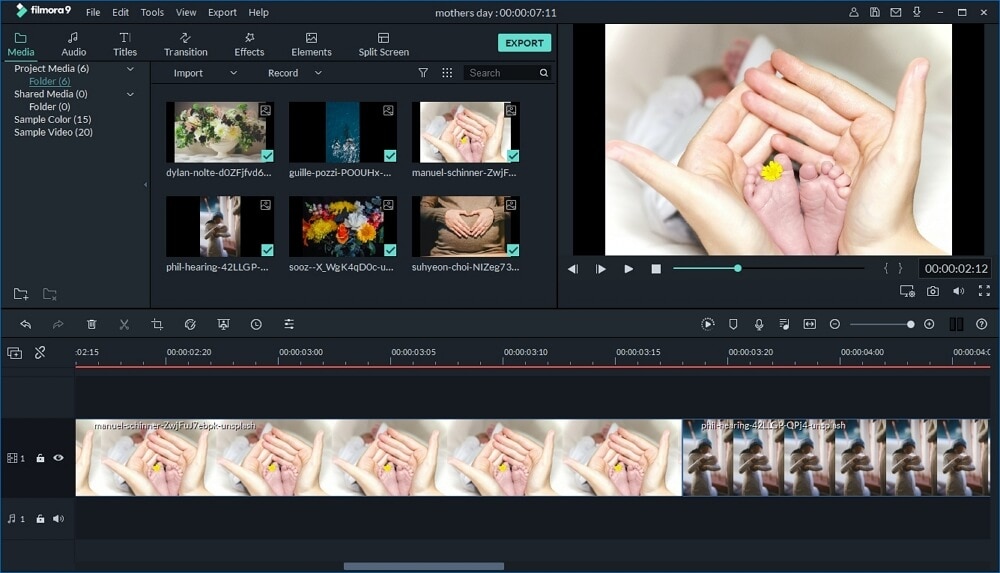 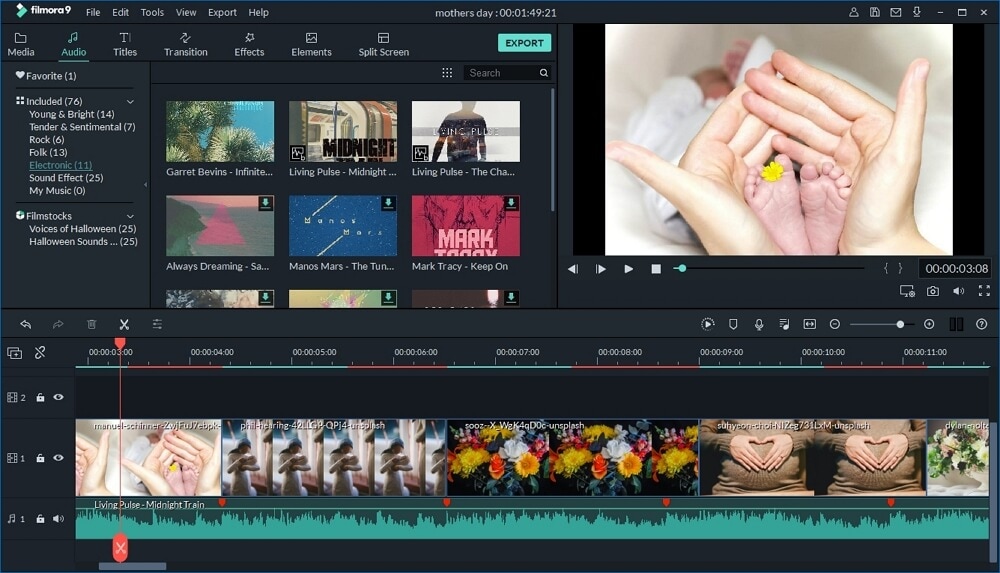 Filmora features the beat detection tool to detect and mark the beat highlight automatically. I used it so that I can change the video frame as the beat changes. 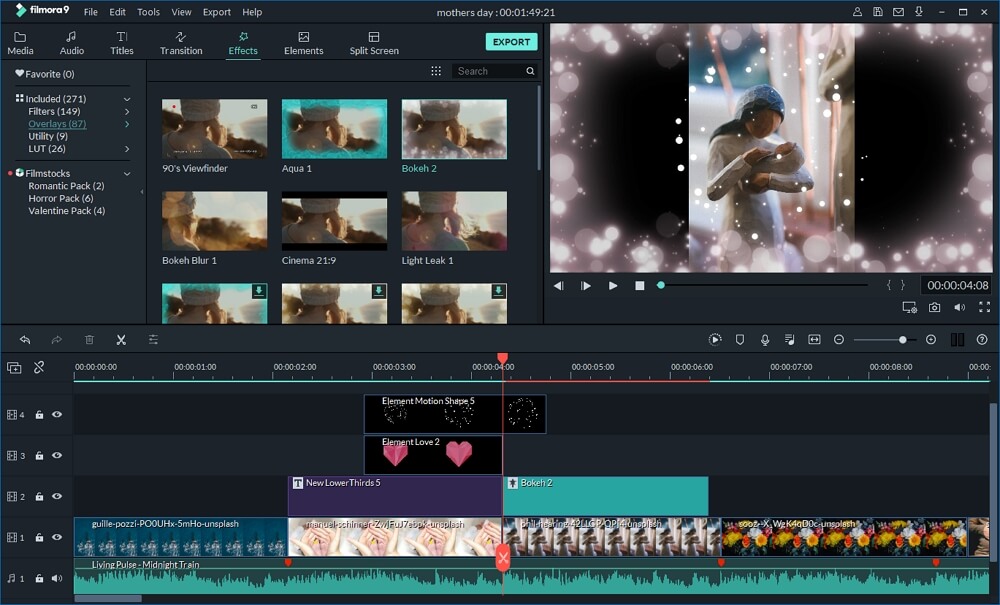 The love mothers have for their children is unique and valuable, so we should all remember to remind them of how much that love means to us. Creating your own Mother’s Day playlist may be a great way to make your mom feel loved. Which of the songs we featured in this article are you going to be listening to with your mother on the Mother’s Day this year? Let us know in the comments.

Thank you for your comment. We will review it within few days.
You May Also Like
Short and Inspiring Mother's Day Quotes from Daughters

We’ve collected some of the most inspiring pocket-sized Mother's Day quotes for your pleasure. Feel free to use these in your cards, artwork or messages

If you want to give something she'll remember, enjoy and treasure for a lifetime. A Mother's Day video is an incredible way for you to do just that.