Download on the App Store
Get it on Google Play
Download
Download
Call us: +1-60-4343-8521
Mon-Fri 6:00 PM to 11:00 AM Pacific Time
International phone rates may be charged by your service provider
Filmora Video Editor
Best video editor to add sound effects and improve sound quality in video
Try It Free Try It Free

Freedom of speech is one of the basic human rights, and you can’t really prevent anyone from expressing their opinions privately or in public. This includes profanities that can be offensive to some of your followers on social media, but you don’t have to include cuss words in the videos you share online if you don’t want to. You can simply cut out the segment that contains inappropriate language and replace it with a beep tone to avoid scandalizing your audience. So, in this article, we are going to show you four easy methods of adding a censor beep sound effect to a video.

Part 1: How to Add a Censor Beep Sound Effect in Filmora on a Mac or PC Computer?

Removing the phrases or even entire sentences that are disrespectful towards others is not a hard thing to do if you have access to Filmora . In fact, with Filmora you can censor an insulting statement in just several easy steps, that won’t take much more than a few minutes of your time.

You should start by creating a new project in Filmora and importing the footage you’d like to censor into that project by clicking on the Import drop-down menu that is located in the editor’s media panel and choosing one of the available options. The video or audio file you imported will be displayed in the media panel and you just have to drag and drop it into the timeline. 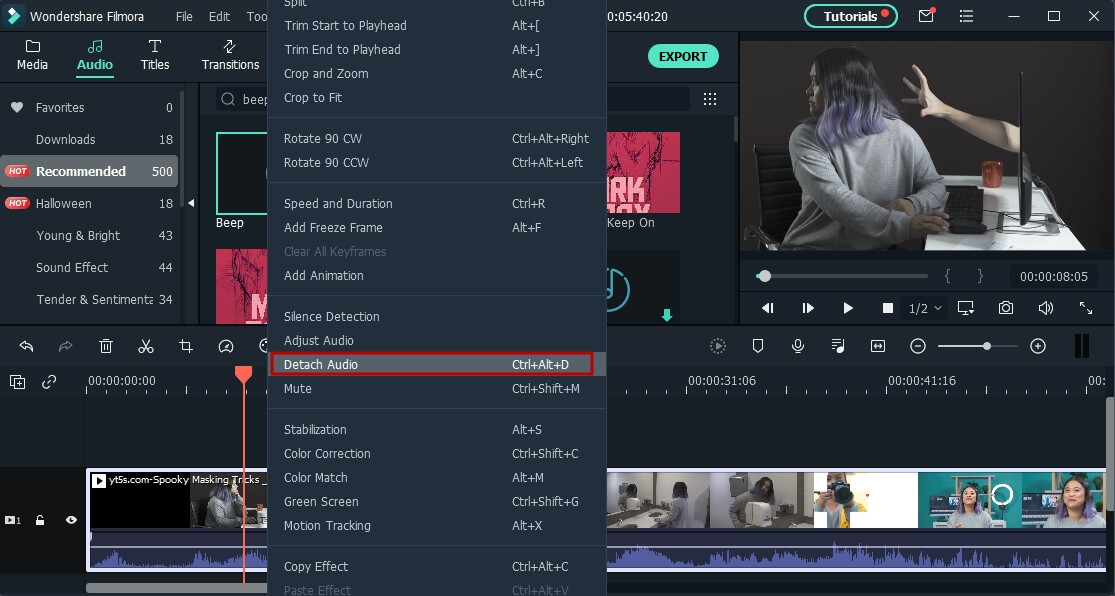 Nearly all video files also have an audio file that is attached to them, so in order to edit the video’s original audio, you have to detach it from the video file. In Filmora, you can do this by right-clicking on the video clip you placed on the timeline and selecting the Detach Audio option or by using the CTRL+ALT+D keyboard shortcut on PC and Control-Option-D shortcut on Mac. Once your audio and video files are separated you will be able to edit each of them individually.

You can find several beep sound effects in the Audio library in Filmora. Open track manager, and add a new audio track above audio track 1. Click on the Audio tab in the upper left corner of the screen to access Filmora’s library of songs and audio effects. Head over to the Audio Effects category and start browsing through the software’s collection of audio effects until you find the Beep effect. Drag the effect to the timeline and drop it onto the audio track that is located under the track that contains the video’s original audio file. Make sure that the Beep effect is positioned correctly and that it covers the profanity you’d like to censor entirely. 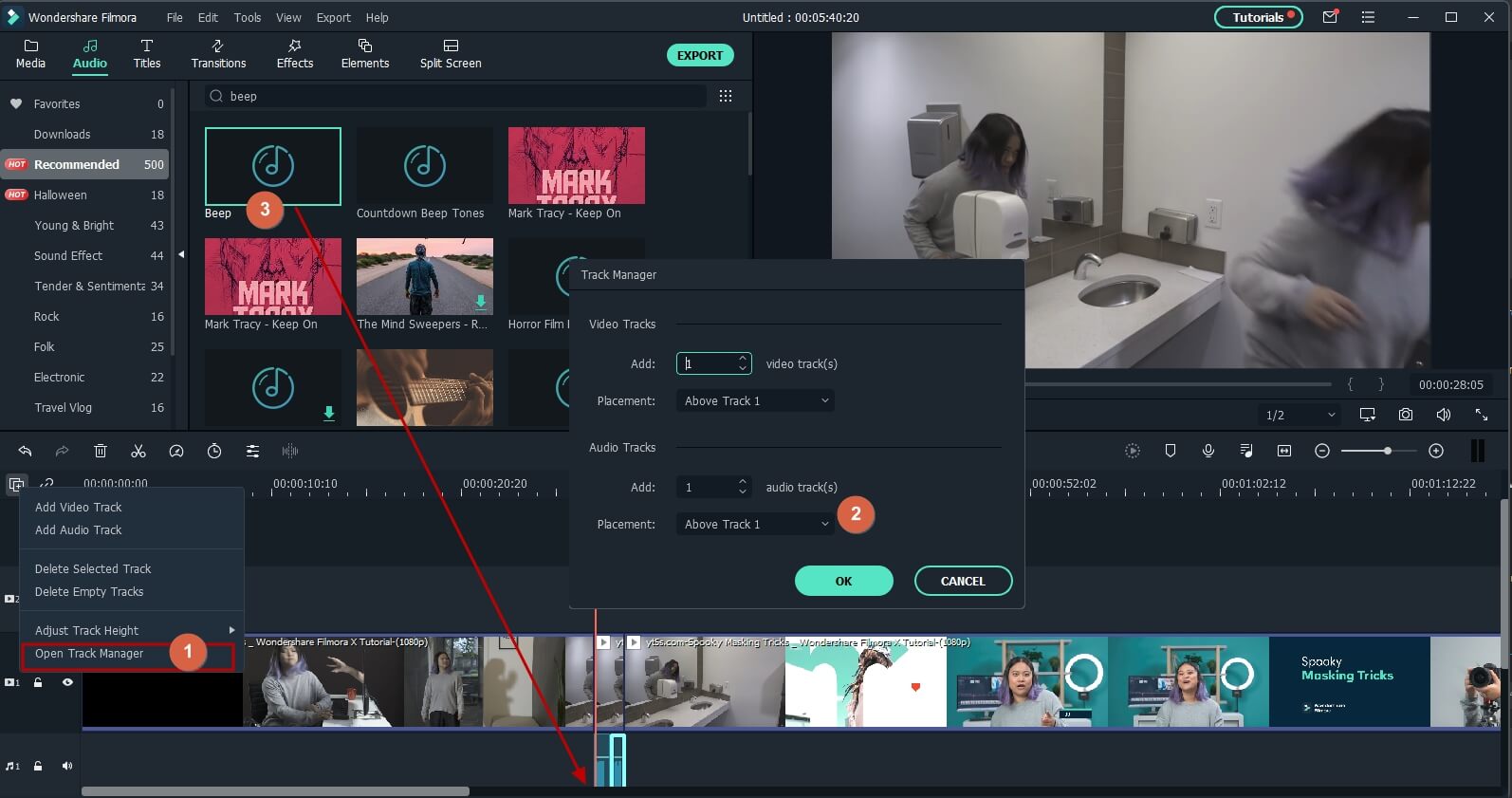 Besides adding beep audio effects, you can also add censor bars to video in Filmora easily. Check the video tutorial below and find out how.

In case you choose to keep the portion of the audio you’d like to censor you should reduce its volume so that it becomes inaudible by dragging the volume level bar that is displayed across the audio file in question all the way down. Alternatively, you can just click on the audio clip that contains profanity to select it and then press the Delete button on your keyboard to remove it from the timeline.

The duration of the Beep sound effect is limited to only a few seconds, and it cannot be extended. If you need a longer audio clip you can use to censor inappropriate language in your videos, then you should visit the Filmstock effects store or click on the All option in the Audio tab and then click on More Effects. This will take you to the Filmora’s store where you can browse through hundreds of audio effects that can be used to censor videos.

Keep in mind that the majority of effects on Filmstock must be purchased before you can use them in Filmora, although some are also available for free. Once you find the sound effect you want to use in your project simply click on the download button next to it, and proceed to import the file you downloaded into Filmora the same way you would import any other media asset.

Part 3: How to Generate a Beep Tone?

The preset sound effects you can find in Filmora and other products to edit videos might not meet the demands of the project you’re working on. If you find yourself in a similar situation, you can easily fix this problem by creating your own beep sound effect. There are countless options at your disposal, so let’s take a look at some of them.

Online Tone Generator is a platform that lets you generate noises, test subwoofers, or tune instruments for free. All you have to create your own beep tone is go to the platform’s home page, enter the frequency of the tone, pick a waveform, and press play. If you like the result you can click on the Save button and download the beep tone to your computer. You can then import the file you created with this online tool into Filmora or any other video editing software you’re using to censor your videos. 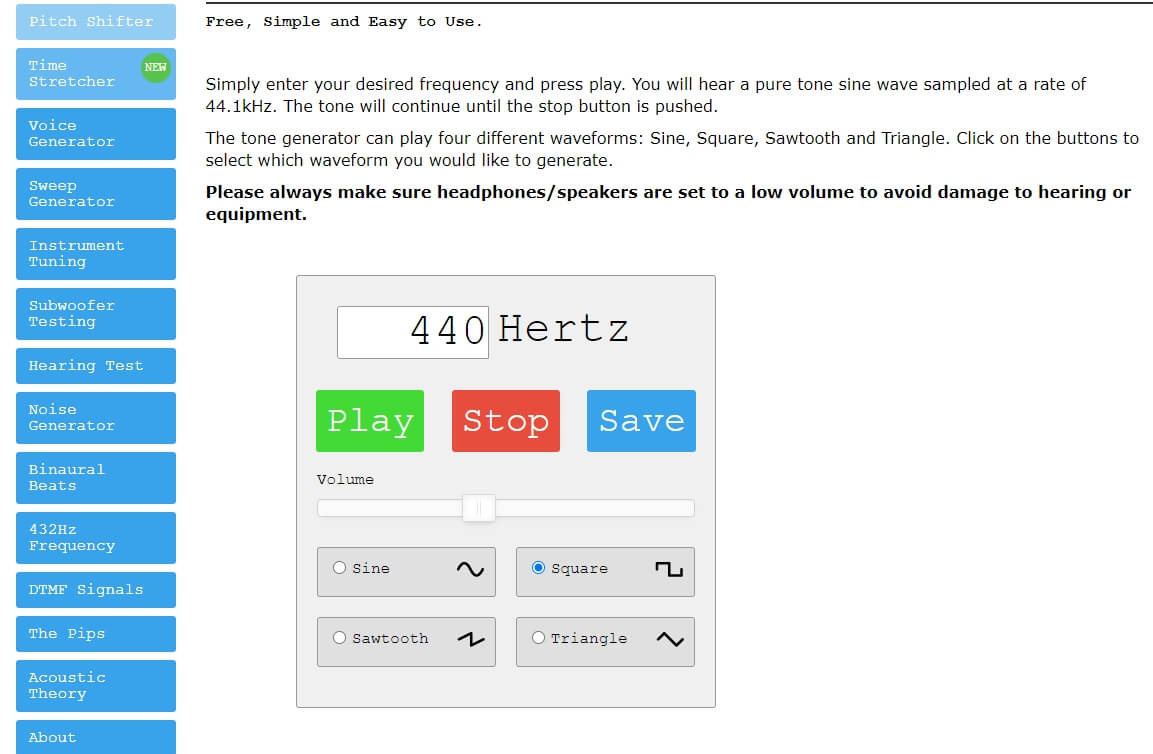 2. Use Audacity to Create a Beep Sound Effect

Audacity is a free, open-source audio editing software that lets you create beep tones effortlessly. After installing the software on your computer head over to the Generate menu and pick the Tone option. The Tone Generator window will pop up on the screen and you should change the Waveform option to Sine, boost the Frequency feature to 1000Hz and set the Amplitude value to 0.8. The duration of the Beep sound effect depends on how long you need the effect to be, so simply insert the value you want and click on the OK button to generate the file. Press the Play button to hear the tone you created and then save it if you don’t want to make any further adjustments.

Video content creators who upload their videos to YouTube and other video hosting sites can censor profanities with an online video editor.

Kapwing online video editor lets you import video files using a URL, and it lets you add audio to videos. After you've pasted the video’s URL you should upload the beep sound effect and use it to cover a cuss word.

In addition, you should reduce the volume of the segment that contains inappropriate language in the video’s original audio in order to make it less distinct. When done, click on the Create Video button and save the file you’ve created to your computer. However, all videos you censor using the free version of Kapwing are going to be watermarked and the maximum duration of a video you can process with this online video editing tool is limited to 30 minutes.

Part 5: How to Bleep Out Profanities in Videos on an iPhone or Android

The videos you capture with your Smartphone sometimes contain cuss words that are inappropriate for your audience on social media, which can prevent you from sharing them immediately. You can solve this issue by downloading a video editing app that lets you add beep sound effects to your videos.

1. Using iMovie to Edit Out Cuss Words From Videos on iPhones

The process of removing segments of the audio that contains profanities is more or less the same in all video editors. A simple video editing app like iMovie enables you to edit out all inappropriate language from a video, but you must have your own audio file since the app doesn’t offer any beep sound effects.

Import a clip you’d like to edit in iMovie and detach the audio from the video. Afterward, you should make a cut in the audio file before and after the cuss word and then proceed to mute that segment. Add the beep sound effect to the part of the video you are censoring and make sure that its duration matches the duration of the segment you muted previously. Preview the video to see if any additional changes are necessary before exporting it from iMovie.

2. Censor Profanities on an Android Smartphone with FilmoraGO

Bleeping out offensive words with FilmoraGO is a quick and simple process. Import the video you’d like to edit from your phone or from social media and tap on the Music icon. Make sure that the beep sound effect is already in your phone’s music library and tap on the + icon in the lower-left corner of the screen. Tap on the My Library tab and select the beep sound effect, adjust its duration and proceed to tap on the Okay icon.

Tap on the Edit Tools icon and locate the Audio Mixer feature, tap on it and mute the video’s original audio. Adjust the volume of the beep sound effect by using the slider below the Music Note icon and tap on the play button to hear the results. Confirm the changes you made by tapping on the OK button and then hitting the Save icon to choose if you want to export the video to your phone’s camera roll or share it on social media.

Strong language doesn’t have to be the reason why you can’t share a video online, because censoring cuss words requires a minimum amount of effort and time. Which method of editing out inappropriate language from your videos do you like to use the most? Leave a comment and let us know.

Making glitch sound effects on your own can prove to be a demanding task, but in this article, we are going to take you through some of the best online destinations where you can find a huge number of

How to Improve GoPro Sound

Although GoPro can record sound along with videos but there are few limitations on sound quality. So users often need some additional tools to improve the sound quality in post processing.