How to Use Lumetri Color in Adobe After Effects

When going forth with film post-production, video game creation, and television production, almost every video editor's goal is to produce outstanding results. Usually, this cannot be achieved by using mediocre tools. One of the top-notch software video editors need to use is Adobe After Effect. Adobe After Effect is a motion graphics, digital visual effect, and compositing application developed by the Adobe system.

Adobe After Effects has tons of tools, and an exceptional one is a Lumetri color. With this functionality, you can easily carry out your color correction and color grading. Read this article and get to the bottom line on how to use Lumetri Color in Adobe After Effects.

Does After Effects have Lumetri Color?

Yes, there is lumetri color in After Effects. Lumetri Color allows you to adjust contrast, light, and color to your video based on your preference. With After Effects, you can carry out various color customizations in the Lumerti panel without exiting your current project.

Furthermore, the Lumetri color panel in Adobe After Effects allows you to export your settings to another different premiere pro project wholly. Usually, the file is exported as a .cube file – This relieves you from the wearisomeness of creating new grading features.

How to use Lumetri Color in Adobe After Effects

Lumetri Color is considered an ultimate choice by most editors due to its wide range of functionalities. Some of the functionalities in the Lumetri panel include:

Vignettes allow you to darken the borders and highlight certain parts. You will therefore create more emphasis on highlighted parts in your clip.

When you want to get exceptional footage controls, HSL Secondary (Hue, Saturation, and Luminance) is often the best functionality. HSL Secondary easily separates your footage and works on a selected piece.

With the functionality, you can easily manipulate the skin tones in your footage and refocus images. 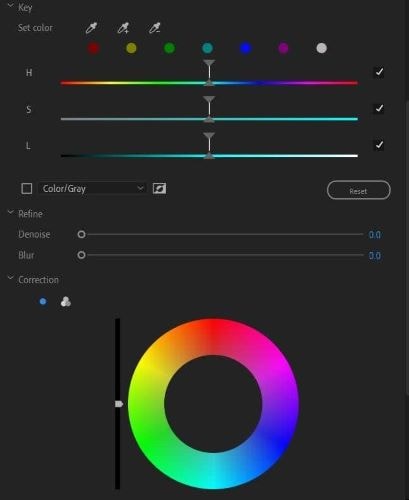 The Lumetri panel in Adobe After Effects renders its users the curves functionality. There are two curves in the Lumetri Panel, i.e., Hue Saturation curves and luminesce curves. 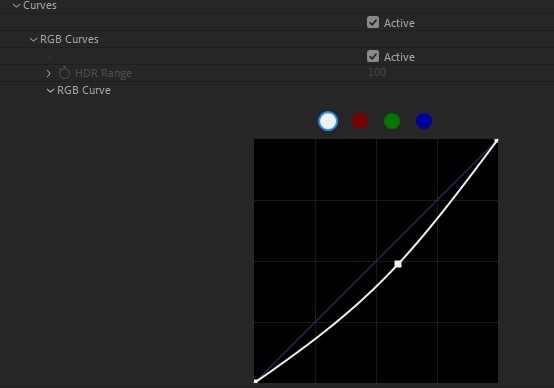 Fx Bypass is a new functionality feature in the Lumetri panel. It allows you to bypass and reset effects without switching to the controls panel.

How to use Lumetri Color

With your Adobe After Effects, you can make quick and advanced color changes to your clips. Here are the simple steps on how to use Lumetri Color.

Step 1. Add your footage to the timeline

First, open your Adobe After Effect and add your video file to the software. Drag and drop to add it to the timeline. 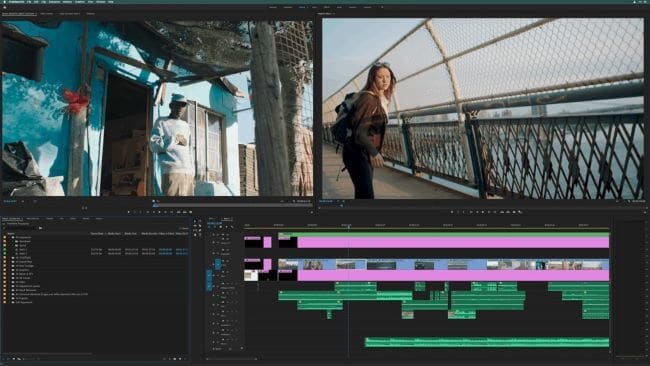 Here, you highlight your video in the timeline, then head over to the “Window” menu. From the drop-down menu, select “Effects & presets” > "Lumetri Color."

Alternatively, you can go to the "Effects" menu, which is at the left-hand side of your interface, then select "Color Correction"> "Lumetri Color." 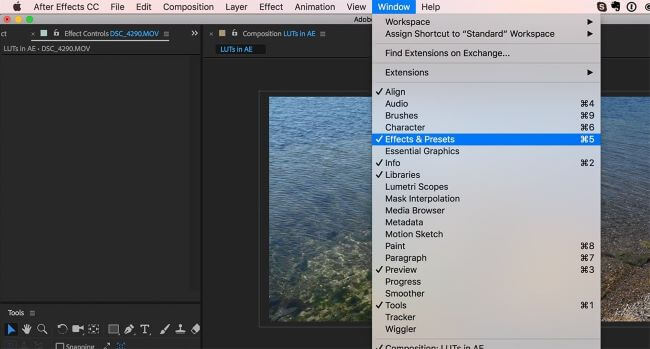 Step 3. Carry out your Color Grading and Saturation

With the "Lumetri Color" functionality, you can carry out various adjustable settings such as tone, hue, saturation and color grading.

To carry out saturation:

Click on the " Hue/Saturation " from the drop-down menu in "Lumetri Color." You can change the color of the entire footage by adjusting the "Master Hue" from the Effects Control Panel.

Alternatively, you can opt to fine-tune the freshly selected color by using the "Master Saturation" and Master Lightness."

To carry out color grading:

How to Use Lumetri Scope

Besides the Lumetric Color, Lumetric Scope is another essential tool for post-film production in Adobe After Effects. The color correcting tool, Lumetric scope guarantees its users' accurate results when used correctly.

When carrying out color corrections in films, it is advisable to use quality monitor calibrators and paint your workspace walls neutral grey. Usually, it reduces lighting distraction and the external color effect, respectively.

However, not every editor can meet all the required basics, and that is where Lumetri scope comes in. Lumetri Scope allows one to get the best color results in their videos. Here are the steps on how to use Lumetri Scope: 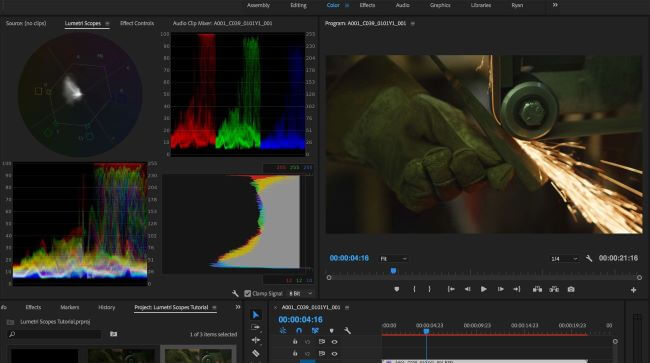 First, open your Adobe After Effect application and add your footage to the timeline. Go to the " Window " menu at the top-left-hand side of your interface.

In the drop-down menu, select "Lumetri Scopes" or "Workspaces," then click on the "Color" option.

The Lumetri Scope tab will be displayed adjacent to the timeline footage.

In the Lumetri Scope tab, click on the wrench icon, and a drop-down menu will be displayed. From the menu, select "Vectorscope YUV" and read the saturation. When reading saturation, begin from the center going outwards.

Hue, on the other hand, is read in a circular direction. 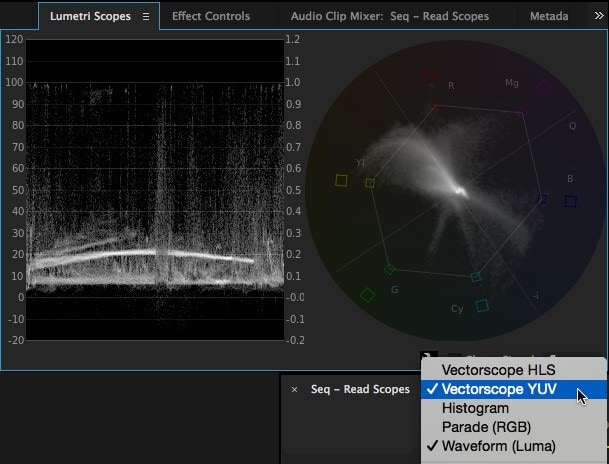 The histogram in Lumetri Scope displays an image's tonal values and brightness levels.

To measure the brightness and tonal values, go back to the Lumetri Scope panel and click on the wrench icon. Click on "Presets" from the drop-down menu and select "Histogram."

The scale in the histogram starts from 0 (pure black) to 225 (pure white). You, therefore, need to view the number of pixels for every color horizontally when reading. 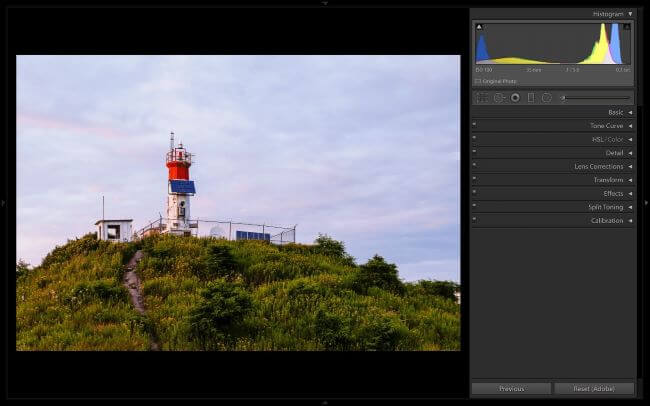 The color and brightness are read from the bottom to the top in the waveform monitor.

Click on the wrench icon to view the intensities, then pick the "Presets" option > “Waveform RBG.” A drop-down menu (RGB, YC, Luma, and YC no Chroma) will be displayed that allows you to do the readings.

Reading the IRE scale is usually done in ascension (0 to 100). 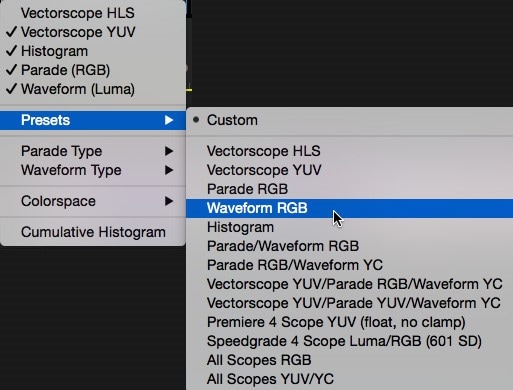 Here, click on the wrench icon in the Lumetri Scopes panel, then select the "Presets"> "Parade RGB." Select from the alternate Lumetri scope combinations of RGB, RGB-White, YUV, YUV white.

Is there a simple way to Unionise the Color of my Video?

Have you tried color grading and color correction in Lumetri using Adobe After Effects, but your efforts are bearing no fruits? It would be best not to worry since there is a simple way out. So, Yes! There is a simple way to unionize the color of your video – it is by using Wondershare Filmora.

Wondershare Filmora is a professional application to edit videos with a wide range of tools that allows its users to create stunning videos with ease. From its simple and intuitive design to its wide range of functionalities and affordability, Filmora users have every reason to stick to the software.

Some of the functionality features that make Wondershare Filmora easy to use include:

Filmora has way simpler curves than Adobe After Effects. Filmora has two presets, i.e., One that creates an S-curve over the graph, and the other resets graph to a straight linear line. Usually, the S-curve represents soft contrasts.

In Filmora, the Hue shift plays an essential role in shuffling the colors, whereas the Saturation defines the overall intensity of colors in an image.

● With the above illustrations, you need not find it challenging to use Lumetri Color in Adobe After Effect. But if you are getting your head stuck when using Adobe After Effects, you need not stress out. There is an ultimate solution, and that is Wondershare Filmora. Incorporate this easy-to-use and pocket-friendly software in your edits. Besides, you will not have to go through the user guide to get started.