Download on the App Store
Get it on Google Play
Download
Download
Call us: +1-60-4343-8521
Mon-Fri 6:00 PM to 11:00 AM Pacific Time
International phone rates may be charged by your service provider
Filmora Video Editor
Make high quality VR video quickly
Try It Free Try It Free

As VR headsets are becoming a common item on store shelves, the VR content is still relatively hard to come by.

The online sources of 360-degree and 180-degree VR videos are scarce, while the cameras that can capture 3D footage are still outside of the consumer level range.

The VR Video converters offer a great solution to this problem as they make the process of converting normal 2D videos into highly entertaining VR content quite simple.

If you’re a looking for a way to quickly convert a video to VR, but you’re not quite sure which software to use, you’ve come to the right place. In this article we are going to take you through 5 best VR video converters on the market.

Videos captured with devices that record videos with two opposing 180° lenses, such as Samsung Gear 360, can be converted into the equirectangular form commonly used for editing this type of footage with a 360° Fisheye converter.

The 360° Video Transform and 360° Fisheye Converter feature can be effectively used on wraparound 3D environment maps. Just needone clik to have the converted video. Free download it to have a try now.

The number of supported VR headsets and VR media players can vary from software to software, which is the reason why it is important to check if the VR video converter, you want to purchase can create videos that are compatible with the headset you have. Let’s have a look at some of the currently most powerful VR video converters: 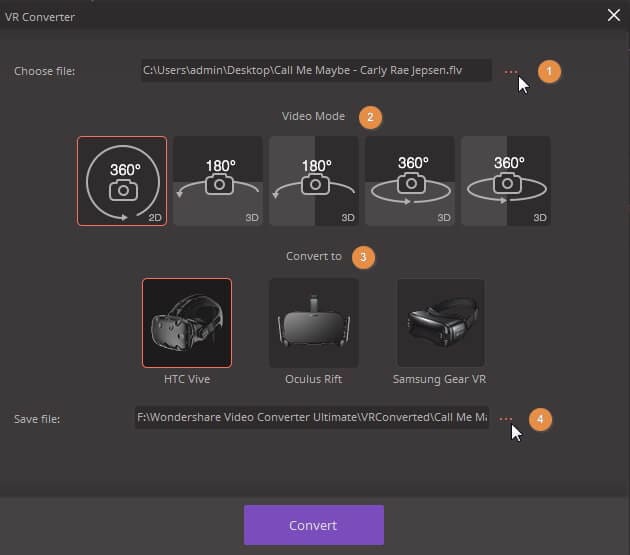 Wondershare’s Video Converter lets you download, transfer, burn or edit videos in addition to providing superb video file conversion options. You can convert videos for playback on a wide range of different devices in more than a thousand video file formats.

The software also offers basic video editing tools that enable you to quickly add subtitles or apply visual effects to a video. This video converter can be used to download high-quality videos from 10.000 websites, such as Dailymotion or YouTube.

Converting a regular video file into a VR video is a quick and easy process in Wondershare Video Converter Ultimate, as you just have to import a video into the software and select one of the five options offered in the VR Converter menu that can be accessed from the Media Tools panel.

The software lets you convert videos to 2D or 3D 180 or 360-degree files, but the videos it converts are only compatible with HTC Vive, Oculus Rift, and Samsung Gear VR headsets.

The intuitive user interface and powerful video file conversion features make the Wondershare Video Converter Ultimate one of the most reliable VR video converters in its price range. 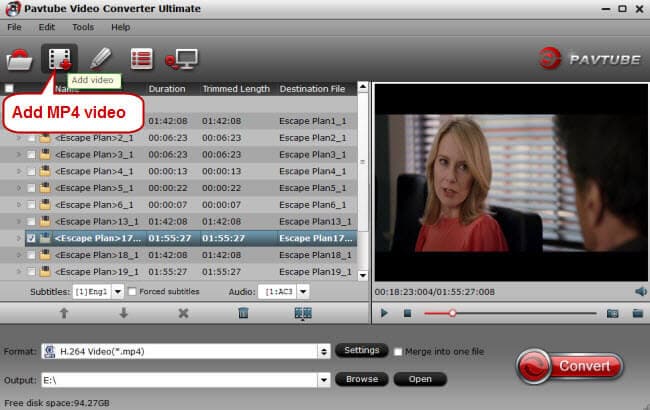 Besides converting HD video files, you can also convert Blu-ray and DVD videos with this video file conversion software. Pavtube utilizes the NVIDIA’s CUDA technology to increase the conversion speed, and it uses the to convert files.

A wide range of formats optimized for a variety of playback devices is available so you can generate files that can be played on Smartphones, tablets, home theater devices or VR headsets.

Pavtube features a moderate amount of video editing options, like cutting or trimming, which enables its users to polish their video files before converting them.

Your videos can be easily converted and optimized for playback on different headsets, but the field of view can vary from 90 to 110-degrees. In addition, the software offers both 2D and 3D options and it lets you create MP4, 3D SBS or MOV files among numerous others.

Pavtube Video Converter Ultimate offers much more than the option to convert regular videos into VR content, as you can easily merge Blu-ray and DVD files or convert audio files.

Price: $29 for a one-year subscription, different pricing plans are available 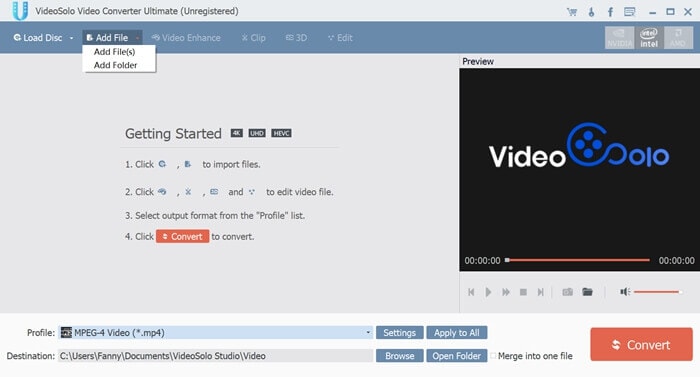 Changing a format of a video or an audio file with VideoSolo Video Converter Ultimate doesn’t require you to be a skilled video editing professional, as you can simply select the format and the output quality of a file you’re converting and let the software do the rest.

You can fully control the process of converting your videos to 3D, 4K or HD resolutions, that is up to 6 times faster than normal due to the NVIDIA CUDA, NVENC, AMD, and Intel HD Graphics hardware accelerator technology.

The software lets you choose from five 3D modes, such as Anaglyph 3D or Side by Side (Full) 3D, and you can adjust the output settings before converting a file.

You can select a preferred aspect ratio, frame rate or fine-tune the 3D settings and optimize each video you convert in accordance with the demands of the headset you’re using. VideoSolo Video Converter Ultimate enables you to generate video files that can be viewed on headsets manufactured by the industry’s leading companies such as Oculus, HTC or Samsung. 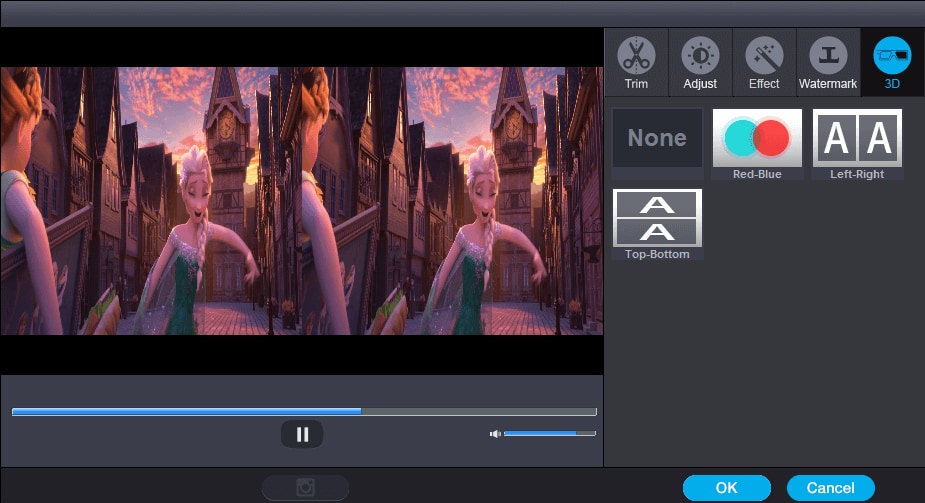 Downloading movies, sharing media files or creating ISO files are a few among many different purposes Dimo Video Converter Ultimate can be used for.

You can burn or convert audio and video files in just three short steps, as you only have to import the source media, choose the output format and start the process.

The software supports nearly all audio and video files formats, and it offers optimized presets that ensure your videos can be played on Smartphone, gaming consoles or VR devices.

While you are setting up the properties of the VR video file conversion, you can select the headset, add VR effects to a video and perform other basic video editing tasks.

Once your video is ready for the conversion you can just click on the Start button and wait for the software to convert the file. Users of Dimo Video Converter Ultimate can effortlessly generate content they want to experience in VR, while transcoding 3D to 2D videos that can be played on 2D displays is also on the list of the software’s features. 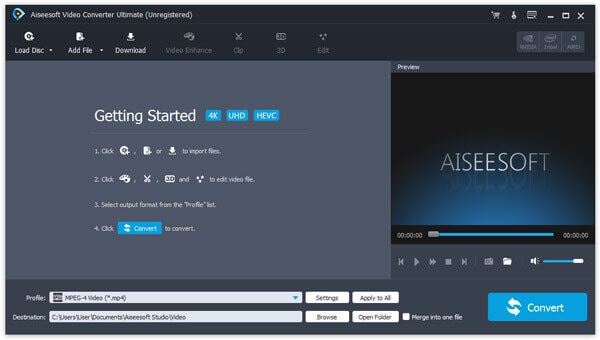 The long list of supported file formats guarantees that you can convert your video and audio files to virtually any file format including Full HD or 4K.

To convert a normal video to VR you only have to select the files you’d like to convert, pick one of the available 3D modes and click on the Convert button.

The software lets you adjust the output resolution or the aspect ratio of the converted videos. The number of the supported VR headsets is a bit limited, but you can still create videos for VR headset models such as Oculus Rift, Google Cardboard or VR One.

How to Pick the Best VR Video Converters

Taking into consideration the number of supported VR file formats, the overall capacity of a software or the level of control over the conversion process offered by a software will help you choose the right VR video converter.

The video editing options or the download features can also be a part of the reason why you should choose one VR video converter over the other.

The prices for the software products that allow you to convert home videos to VR can vary and they often depend on the pricing plan you choose. However, checking if the software provides support for the VR headset you have is the most important step you need to take while deciding which VR video converter, you’re going to buy since you won’t be able to enjoy your videos in VR if the headset isn’t supported by the software.

Over the last couple of years, VR headsets and media players have become quite popular, because they are offering nearly unlimited entertainment possibilities. Video converters can help you keep your supply of VR videos constantly updated, as they offer a quick way to convert a regular video file format to a VR video. Do you have a favorite VR video converter? Let us know in the comments.

Thank you for your comment. We will review it within few days.
You May Also Like
Best 5 VR headsets for Drones

Drones with VR headsets give the user a totally immersive feel but not all are compatible.

What is VR controller? What are the controllers can be used on VR device? Check this article for more information.