Any Differences in Making Collages in Different Versions of Microsoft Wor

There are also other things to know about the process such as the difference between making photo collages in different versions of Microsoft Word or which version of the Microsoft Word is most commonly used by all people.

Part 1 Any Differences in Making Collages in Different Versions of Microsoft Word?

The usability of Microsoft Word does not end at simply writing text. It extends to the usage of photos and the creation of photo collages using these photos. Microsoft Word has the right features which you can easily use to organize pictures and photos in a certain way to make a photo collage. The collage maker Microsoft is not a hard operation to access if one knows the various options and operations of Microsoft Word well. There are different versions of Microsoft Word, all of which serve the same purposes but have different options and different icons representing various features. No matter which version you are using, the primary process of creating remains the same in all of those processes as it is simply the collection of the desired pictures, deciding on a particular shape and dimension of the page where you will arrange the pictures, inserting the pictures into the page, and then arranging them in a certain order. 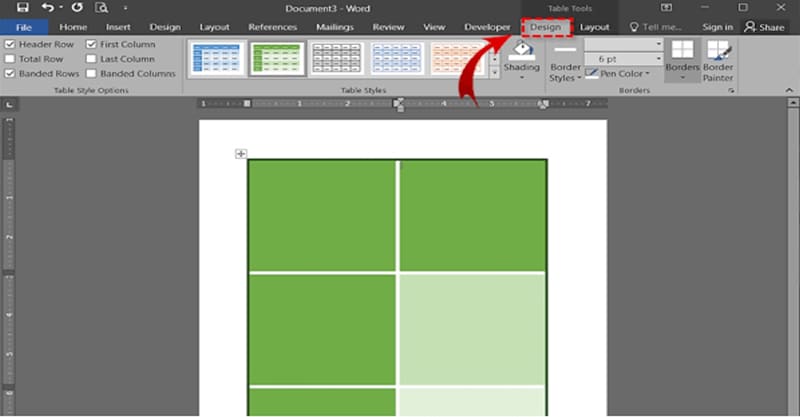 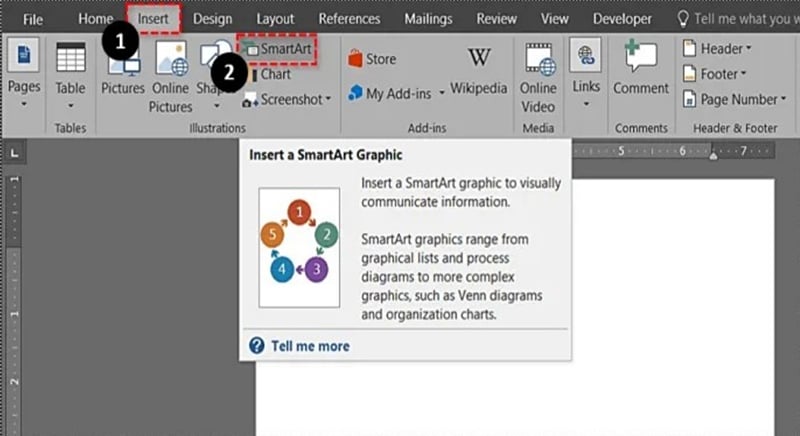 The 2013 and 2016 versions of Microsoft Word also contain something called the 'Developer” option, which can be accessed from the 'Customizing the Ribbon” section. You can use it to specify the number of pictures and then insert pictures from a file. There is also the option of using Word Tables which can be used in any version of Microsoft Word to create a certain arrangement for your photo collage. Word Tables give the user complete control over the layout of the collage and this makes it easier for the user to arrange the pictures of the collage. 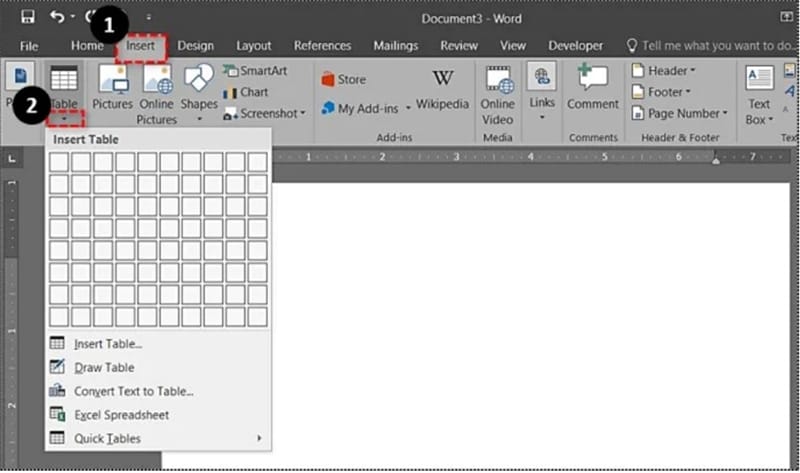 There is so something called the 'Effect” option which can be found in the 'Format Picture” option, and this can be efficiently used to add various artistic effects and modify the pictures in ways that the user wants.

The most commonly used version of the Microsoft Word software to create photo collages is expectedly the newest as it comes with the maximum features which enable the user to go beyond text and control designs, graphics, and everything else.

Part 2 How To Make A Photo Collage In Microsoft Word

● Creating a photo collage by freestyle – This is the simplest method and is quite easy and thus, does not require much expertise to be followed.

● Firstly, go to the Ribbon. From there click on "Developer" option which can be found there. In case the option is not activated, the user can activate it by clicking on the "Customize The Ribbon" From there activate the 'Developer” option.

● The second step follows the user clicking on the 'Picture Content Control” button and this can be found easily in the 'Controls” section of the Ribbon. This option is used to create placeholders for all the desired pictures.

● The cursor is placed on each placeholder and the 'Picture” option is clicked upon. This gives you access to the pictures and following this, you will need to specify the source from where you shall obtain the pictures to paste them into the Word document.

● Now, the problem arises when each picture is pasted in the document in a random way and sizes and shapes. This can easily be solved by right-clicking on the picture and then clicking on "Wrap Text", followed by 'More Layout Options”, 'In Front Of Text”, and this will enable you to arrange the pictures in whichever way you like.

● Now, the pictures can be organized in any way you want, and thus, the entire collage can be created in any you want. You can go ahead and shrink or stretch a photo without distorting it. You can use the various options of the "Picture Tools" tab to format the images which have borders and preset styles and shadows. 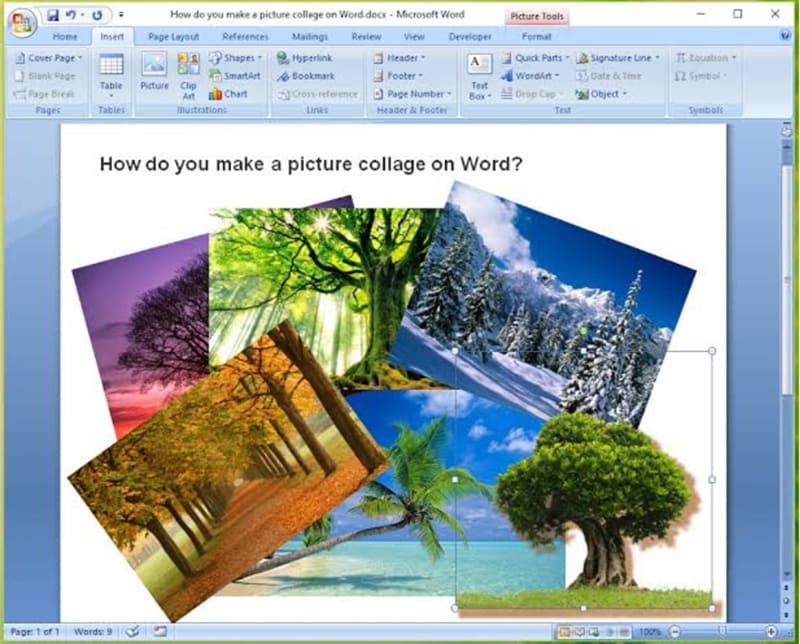 ● Creating a collage using 'SmartArt” – 'SmartArt” is the easiest way to create a collage in Microsoft Word and in the shortest time possible. It is a pretty straightforward procedure. Let us take a look at the steps.

● Go to the 'Insert” option and click on 'SmartArt”, and then go and click on 'Picture”, and out of the photo collages that appear in front of you, select one that is either photo-only or is photo-and-text and looks perfect for your purpose.

● By clicking on the picture icon on each photo placeholder, and then choosing 'Insert”, you can choose to insert photos proportionally, as you please.

● Select a photo and click on the 'Picture Tools” tab, while moving the photo into a placeholder. You can click on the 'Crop” button to stretch or shrink a picture according to your wish. Thus, you can easily resize and reshape your pictures and photos in any way you like.

● The last and final step of the Microsoft auto collage option is repositioning the pictures by choosing 'Move Up” or 'Move Down", which can be found under the double-arrow in the 'SmartArt" frame's the left side. Thus, you can easily change the entire arrangement of the entire photo collage, quite having to do much. 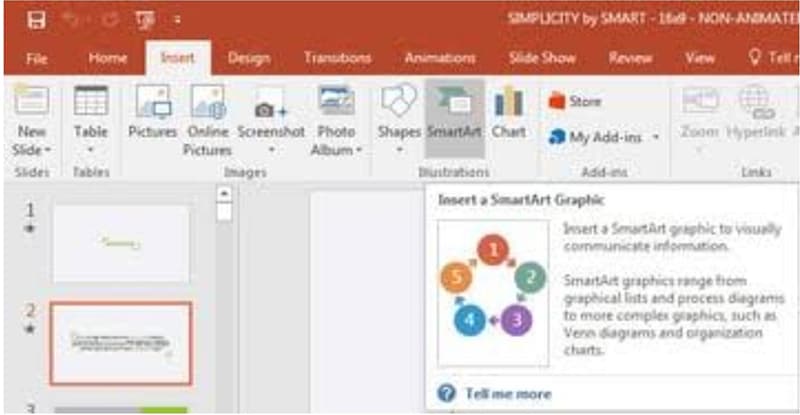 If you are trying to make a photo collage, you can also go with the Wondershare Filmora Video Editor, which has some amazing features, to make your job much easier.  It has over 10 million stock media, a huge number of preset templates, and a feature called "Speed Ramping", which you can use to adjust the speed of your video.  It has various kinds of stock media such as "Pixabay", "Giphy" and "Unsplash".

It works on a variety of operating systems, such as Windows 7, Windows 8.1, Windows 10, and also Windows 1It has a minimum RAM requirement of 4GB, though 8 GB is recommended for 4K and HD videos. It also requires a minimum of Intel HD Graphics 5000 or newer versions.

●With the release of newer versions with more and more features and options, it becomes easier to exercise control over graphical content in Microsoft Word.

●So, the processes are quite straightforward and simple and there should not be much problem in following them as mentioned so many times, there are many collage maker Microsoft options which you can use to make a photo collage with pictures and shapes that you desire.

●The immensity of options enables you to create collages in whichever you like.