Download on the App Store
Get it on Google Play
Download
Download
Call us: +1-60-4343-8521
Mon-Fri 6:00 PM to 11:00 AM Pacific Time
International phone rates may be charged by your service provider
Filmora Video Editor
Change or blur the faces/objects in a video easily with Filmora
Try It Free Try It Free

Only rare people can predict or create trends on social media, the rest of us merely follow them. The latest buzz on Snapchat, Instagram and Facebook are the hilarious gender swap pictures that let you see how you would look like if you were a man or a woman. However, at the moment there are only a few apps that offer gender swap effects, so you must either use Snapchat or the FaceApp to swap genders. That is why in this article we are going to show you a few different methods of creating gender swap photos with these two apps.

Snapchat introduced three new filters that caught the attention of the crowd on social media because they highlight masculine or feminine characteristics of facial traits. The ‘man lens’ will make your jawline shaper, hair shorter and your beard longer, while the ‘woman lens’ makes your skin look softer or applies some makeup to your face. The ‘baby lens’ however, is by far the most popular of the three because it enables people to see how they would look like if they were less than six months old.

Taking a photo of yourself while any of these filters is enabled is a simple process that won’t take more than a few seconds. Launch the Snapchat app, then open the camera and switch to the phone’s front camera by tapping on the arrow icon at the top of the screen. Each of the gender swap filters should be within the top ten filters in the Snapchat’s filter collection, so just select the one you like and then take a photo. After you Tap on the Save button, the picture you’ve taken is going to be stored in the Snapchat memories.

At the moment Instagram and Facebook don’t offer gender swap filters to its users, and if you want to post a gender swap photo on these two social media you have to take a photo with another app. Sharing a picture you’ve taken with Snapchat on Facebook, Instagram or other social media is not complicated although it requires some time and effort. Once you’ve taken the photo with the man, women or baby lens you should tap on the icon that looks like two cards that is located at the bottom of the screen and select the gender swap picture you want to share on Instagram or Facebook. Take the screenshot of the photo you selected, and save it to your phone’s Camera Roll.

Launch the Instagram app and use its photo editing tools to crop out all unwanted parts of the picture or enhance its colors. You are not going to be able to edit your gender swap photo with the Facebook app, even though you can easily share the photo on your profile. Sadly there is no indication that either Facebook or Instagram are going to introduce new gender swap filters in the near future and Snapchat is still one of your best options if you want to create this type of photos.

Install FaceApp to Your iPhone or Android Device 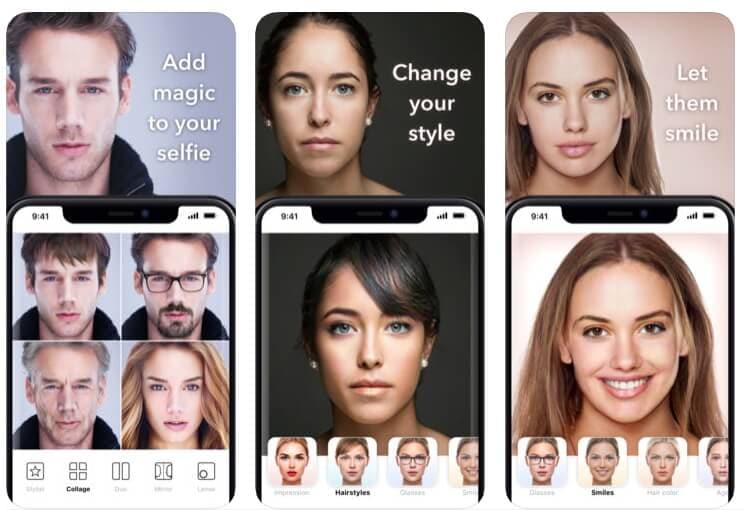 The FaceApp is a strong alternative to the newly added gender swap effects on Snapchat because it offers more gender swap filters and it makes sharing the images on Facebook or Instagram much easier. The app can be downloaded for free from the AppStore or GooglePlay Store, but you must make in-app purchases if you want to unlock its Pro features. However, even the free version of the app utilizes Artificial Intelligence and neural nets to analyze a vast amount of images and use the findings to make your face look more masculine or more feminine.

The app’s users can either take new photos or edit the pictures they’ve taken with another app, but some filters are only available if you purchase a monthly or an annual subscription. The FaceApp lets you put on a new smile, swap genders or use the cool style filters to take better selfies. You can experiment with different looks and see how you’d look like if you were a Hollywood superstar or if you had a long blonde hair. Once you find the look that all of your friends must see, you can share the gender swap photo to Instagram or Facebook with a single tap.

Read More to Get : How to Screenshot on Snapchat without Them Knowing >>

Taking a swap gender photo is going to cheer up your day and give your friends on social media a good laugh. The number of apps you can use for this purpose may be somewhat limited, but either Snapchat or the FaceApp are powerful enough to enable you to create gender swap photos that gets hundreds of likes on social media. What is your favorite gender swap filter? Leave a comment and let us know.

it is relatively easy to connect your Facebook and Instagram accounts and share all content with your followers on both networks. So, in this article, we are going to show you three different methods

How to Screenshot on Snapchat [5 Ways]

Taking a screenshot on Snapchat without being detected is hard, but there is a possibility. Here we provide you 5 methods to avoid them knowing.