How to Add Manga Effect to Your Video: An Ultimate Guide

Create the best manga effect and add speed line overlays to your videos. In this article, we will tell you the quickest ways on how to add the Japanese manga effect to Your Videos.

Anime-style speed lines began in the manga, a type of Japanese comic book, and have since become a staple of both genres. Anime speed lines are a visual effect used in cartoons, movies, and comic books to emphasize motion. A lone hero stands before a challenger in a traditional setting, both with determined expressions on their faces. The hero remains still for a few seconds, almost as though gathering strength for the impending battle. Their accumulated power erupts in a visual effect that resembles sun rays emitting from each opponent when they take action. As they rush and the combat begins, these radial speed lines stretch out from their shapes. Fans of anime (Japanese animation) will recognize this: anime speed lines signal that it's time to take action. Learn how to make your animation more exciting by using manga effect, i.e., black-and-white lines.

Part 1: How to Add Speedline Overlay to Make Manga Effect?

Filmstock has over 10 million assets, including royalty-free video effects, audio stock footage, and images. In only a few clicks, you may drastically alter the appearance and feel of your footage. Follow these easy steps to add Speedline overlay to create manga effect:

Open filmstock.wondershare.com and search for the Japanese Speedline pack. 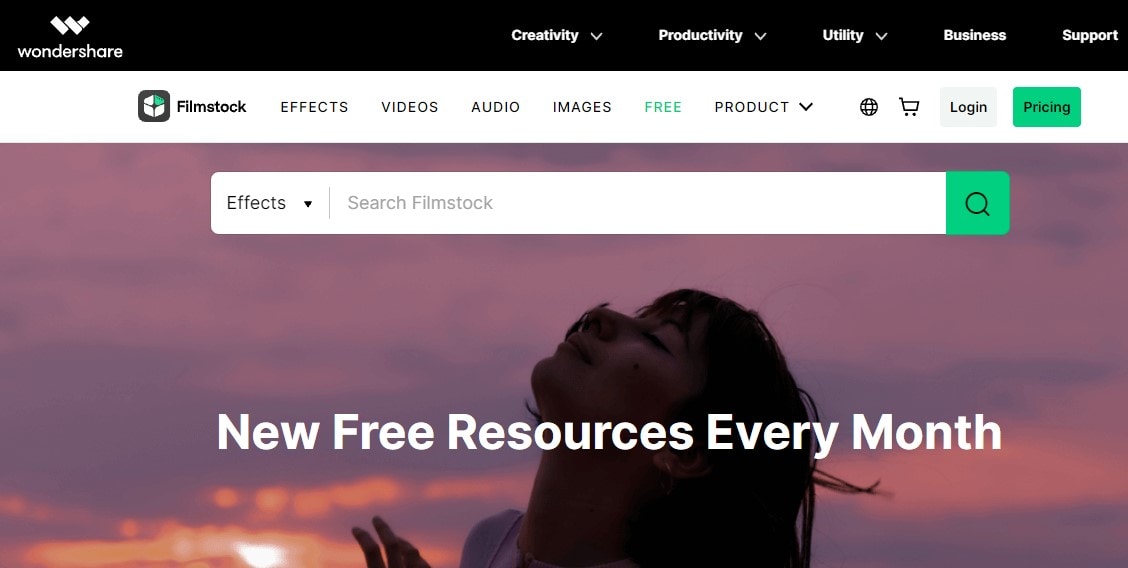 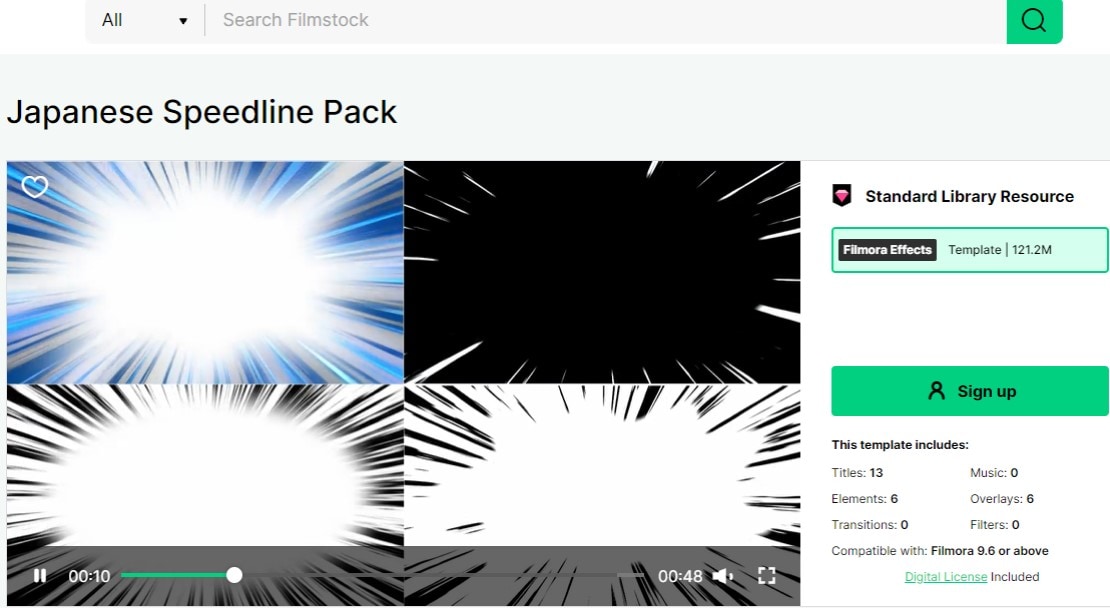 When the installation is complete, you can open Wondershare Filmora and use the effect. Click the person icon on top of the screen. Click on my effects to see what you have downloaded.

Click on elements and find your effects. Double click on the effect to preview it. Drag it down to the timeline. 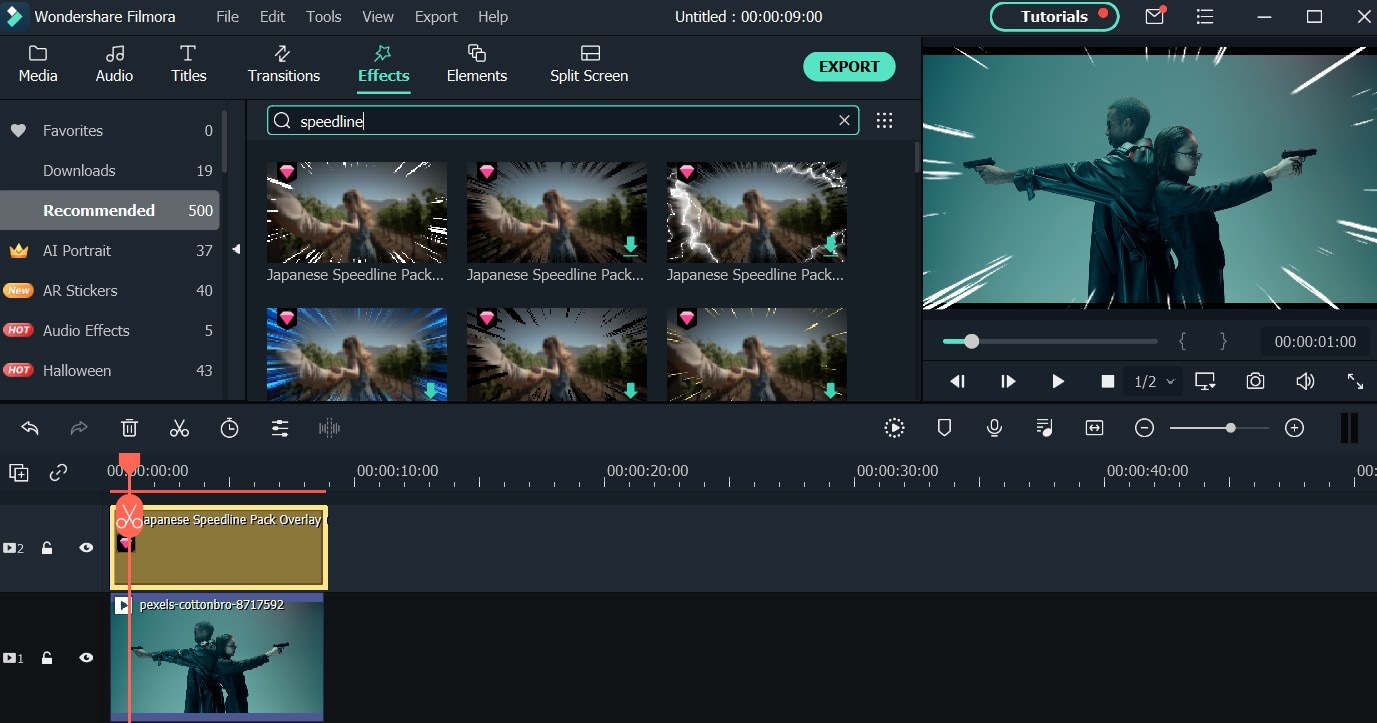 Part 2: How to Add a Black and White Filter to Video?

Anime speed lines, despite their name, have nothing to do with Japanese animation. In the manga or Japanese comic books, the speed lines appear where heroes, robots, and monsters are about to combat first. In a static medium, black-and-white comics frequently required a means to portray motion. Many anime shows are based on manga, and those adaptations haven't merely taken the main themes, characters, and narrative lines from a series and run with them. They also used manga's visual language, which offers shortcuts for expressing emotions and action. In anime, characters soaring through the air are frequently accompanied by a halo of speed lines, like in the manga.

Follow these steps to add black and white manga effect to your videos:

Open YouTube and search for anime speed line effect black and white. Select the royalty-free one and open it.

Open your video editor and add a video to your timeline. Now import the manga speed line effect black and white that you downloaded previously.

When the overlay is over your clip, go to opacity and change the blend mode to multiply. Go to scale and change it to 150. Now click on presents and add the gentle shake effect.

Manga sound effects are very diversified, describing crashes, thumps, and slicing using a variety of consonant and vowel combinations. Pronunciations like 'slam' (pa-tan!) and 'roar' (GA-O-!) are frequently more realistic than in English. Sound effects for abstract facial expressions ('niko' for a grin), notions ('shiiin' for a gaze, or quiet), and even temperature ('poka poka' for warmth) are all unique to Japanese onomatopoeia. They are an essential component of the artwork; therefore, they are hand-drawn appropriately at the time of inking.

To create an excellent manga effect, use visual grammar. Many symbols, such as punctuation marks for pictures, are used in comics to help the reader understand what the characters are experiencing. Perhaps a heart to indicate romantic feelings or a light bulb to show a brilliant idea. A drop of perspiration for uneasiness or embarrassment, a hash mark on the forehead for anger (mimicking elevated veins), and small spirit wisps collecting for depression are just a few examples from the manga.

Aside from using screentone for shading, there are many other things you can do with it. For classic white painted highlights, use white pencil over both lines and screentone. Using an Eraser set to Dissolve, create delicate, burnished highlights. To give the art a fuzzy effect, use screentone slightly above the lines. By stacking various screen tones on top of one other, you can improve the contrast in your shadows, but be careful: if you use different densities or align them wrong, you can get moiré.

Another famous manga style is 'kemonomimi,' which means "animal ears." For example, if someone is as cunning as a cat, you may depict them with cat ears and a tail. You may even go a step further by utilizing cat eyes with slit pupils and the form of a cat's mouth. Why not make a sad puppy dog out of a frustrated man? A ferocious mother as a dragon?