The launch of Adobe Rush has been eagerly anticipated by the entire video content community. From the back-bedroom YouTuber to the videography professional, we've all been keen to see how Adobe planned to package the best of their powerful suite of programs into a mobile-centric package.

Now we've had a chance to get our hands on Adobe Rush for iOS, it's natural to start drawing some comparisons between this and similar software out there. As much as it promises to be the powerful straight-to-social cross-platform program we've been waiting for, we're also acutely aware of rivals such as the acclaimed video editor for iOS known as LumaFusion.

We're going to take a look at Adobe Rush vs LumaFusion side by side, to see which is the most capable, competent, and user-friendly video editing solution for iOS users.

We're going to look at some of the most important elements of Adobe Rush vs LumaFusion to see which app comes out on top:

The LumaFusion interface is super easy to use. Even on an iPhone screen, it feels spacious, and with the handy quick start video, it's simple to get started right away. The multiple layout options make it suitable for pretty much any editing style, so whatever you find easiest to use is accommodated in the app. 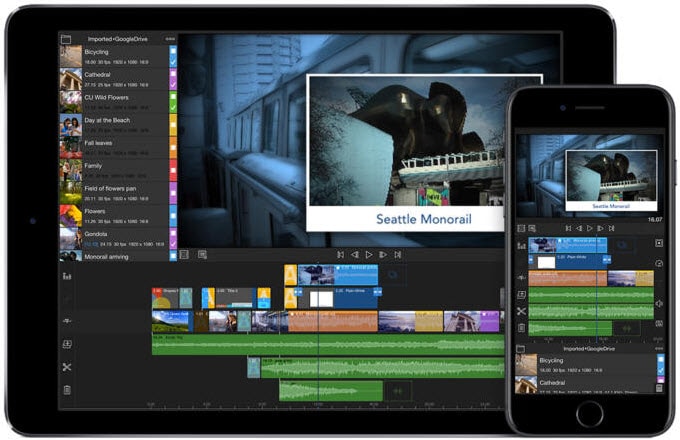 The main editing function works via a drag and drop system. The in-built gesture controls are a nice touch; swipe down for an in point and up for an out point, or double-tap to go to full screen. Clips are auto moved to make room for new clips, or you can set it to replace a clip by simply dropping the new one on top.

With Adobe Rush for iOS, getting started is similarly straightforward. The use of on-screen prompts and stock footage gives new users a walkthrough of all the main features and functions, so they can hit the ground running. It's also a drag and drop system, although somehow isn't as fluid as that on LumaFusion. 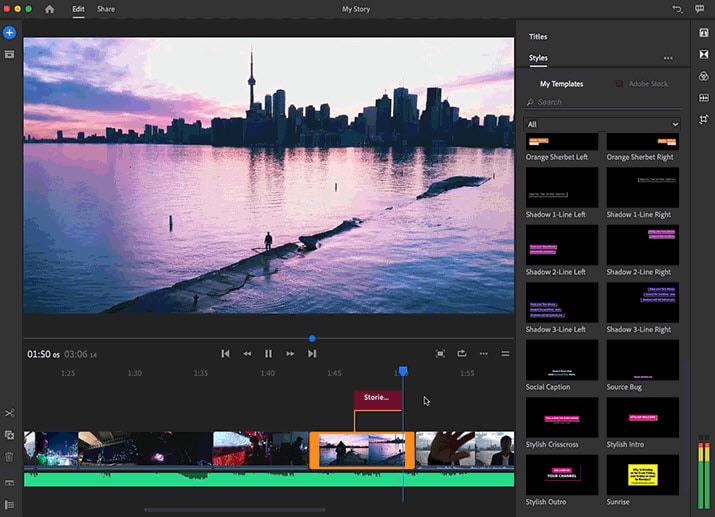 Content can be added from local storage as well as from cloud storage such as Adobe Creative Cloud or Apple's iCloud Drive. Once editing begins, the file is seamlessly synced to the Creative Cloud, so you can quickly switch from one device to another with no cumbersome transfer process.

Adobe Rush is included with a Creative Cloud subscription or costs $9.99 per month without

With LumaFusion, you can import any files which are compatible with iOS, not just those created using iOS. This includes QuickTime Movies, MP4, M4V, and MJPEG. Audio formats supported include MP3, M4A, AAC, AAF, CAF, and WAV, and images are supported in PNG, JPG, and TIFF, among others. The only notable unsupported formats are ProRes and AVI.

Adobe Rush supports a wide range of video and audio formats for input, including those from professional cameras. Examples include Apple ProRes, DNxHD, GIF, M2T, MOV, MXF, MTS, and M2TS. Audio support is provided for WAV, AIFF, MP3, M4A, and AAC and still images for BMP, GIF, JPEG, PNG, HEIF, and more. As well as this, it supports native camera formats from ARRI AMIRA, Canon XF, Panasonic AVC, and P2 cameras as well as a number of Sony cameras.

In terms of LumaFusion vs Adobe Rush, LumaFusion is by far the superior software. From custom fonts to stunning professional-quality effects, there's not much you can't do with this software in terms of video editing. It works well on all devices, it's easy to learn but has enough scope to challenge even the most experienced video editor to push its capabilities to the max. It's far and away from the most powerful iOS video app out there right now.

Of course, it's not perfect; nothing ever is. The biggest downside we can see to LumaFusion right now is that there is no support for direct import from iCloud. You can import locally from your Camera Roll, from iTunes, or using the iTunes File Sharing tab, but that's not necessarily ideal when dealing with a large file. The developers have said iCloud support will be coming in a future update, so we'll look forward to that.

The marketplace expected a lot from Rush, and on the surface, it's a little disappointing. In terms of usability, it's pretty quick to pick up and works well on MacBook, iPad, and iPhone, with no noticeable lag. While there are some good editing tools, it doesn't go deep enough into the editing process to really be a replacement for LumaFusion.

Adobe Rush is definitely tailored to the consumer market. It's got just about everything an amateur could ask for from a video editing app, but for anyone with experience or trying to make a living from the video content, it's probably not powerful enough. Where it does come into its own is when used in combination with other CC apps. Doing a 'rush' video clean up in Rush is quick and easy, and the file can then be opened in Premiere Pro for further fine-tuning later on.

An Alternative to Adobe Rush and LumaFusion

After reading the complete comparison between Premiere Rush and LumaFusion, are you ready to pick up the one you preferred? If you still have no idea, no worries, here is another option for you. Wondershare Filmora is a full-featured video editing software that has covered most of the features mentioned above. No matter you are a newbie or an expert, creating visually striking videos has never been easier with Filmora.

Both Adobe Rush and LumaFusion are useful in their own rights. Which is better for you will depend on what you want to do, and how much time you want to spend on it.

For a beginner, Adobe Rush for iOS is a decent entry-level app. It does what it says on the tin – rush! If you're a content creator who requires not much more than adding some titles and music, correcting some colors, and clipping a few bits out, before spitting your content onto your favorite social channel, this is the perfect solution.

However, for anyone more serious about video editing, it's just not the end to end solution you're going to need it to be. It's useful as a pre-prep tool for doing some basic cleaning up, later to be perfected on one of the other CC suites of tools, but as a standalone editor, it's seriously lacking.

LumaFusion on the other hand is a much more attractive prospect. Easy enough to pick up in moments, it offers complete control over all aspects of imported media. There are enough effects, transitions, and funky tools in this app to keep you busy for weeks. It brings together everything required for pro video editing, without the need for any additional software or apps.

And, at a one-off price equal to two months of Rush subscription, we'd say it wins on price too.

Thank you for your comment. We will review it within few days.
You May Also Like
Adobe Rush Vs. iMovie: Which One Is Better for Apple Users?

We're going to compare Adobe Rush vs iMovie, to see which is the winner for the Mac user. Let's find out.