How to Stabilize Shaky Videos in After Effects

Wondershare Filmora is one of the most popular video editing software among YouTubers, which provides the video stabilization tool to remove shake from videos within one-click. Download and have a try now.

Video content is becoming increasingly popular; with the proliferation of online content, practically every product now needs its mini-documentary or video clip. Experienced filmmakers and VFX artists used to be the only ones who could get smooth footage. Those days, however, are over.

Adobe After Effects is an excellent tool for smoothing out video footage, in addition to being a great blending and motion animation software; although it's usually preferable to maintain your film as seamless as possible on location, it's not the end of the world if you take a seat to edit your video and decide it's too shaky. In truth, there are several options available to you. In After Effects, there are three options for stabilizing footage. What are they – and how to use After Effects to stabilize footage? Let's find out!

The Warp Stabilizer effect is a new technique to cope with unsteady video. In this part, I will show you how to apply Warp Stabilizer to a layer, adjust the effect's essential parameters, and demonstrate how they work briefly.

Step 1: The Warp Stabilizer is the most excellent built-in choice for After Effects. This may be found under the Distort tools section of the Effects & Presets panel. You may also go to the effects tab and look for "Warp" in the search box. 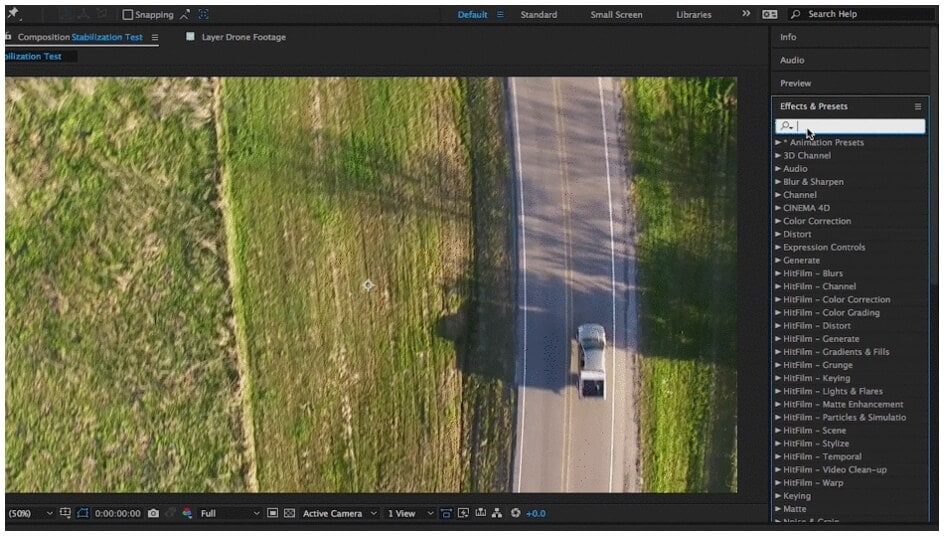 Step 2: When you've identified Warp Stabilizer, you'll have to add it to the layer you want to stabilize. You may accomplish this in one of three different ways. You may either drag and drop the filter into the chosen layer in the composing window, place it on the desired layer in the timeline, or double-tap on the effect while selecting your choice footage layer. 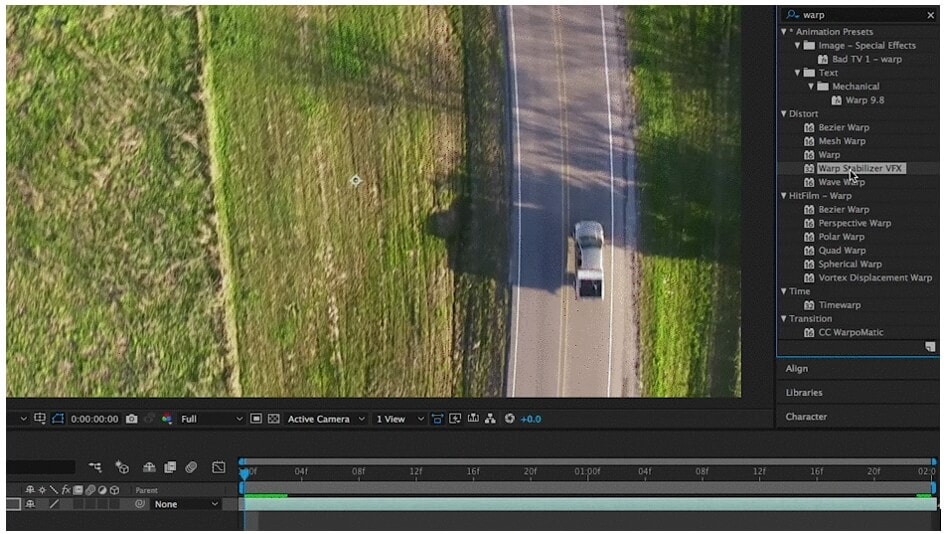 Step 3: Once you apply the warp stabilizer, it will start immediately. So now, all you have to do is lay back and let the stabilizer do its job.

Step 4: After stabilization, use the spacebar to begin a RAM peek. Choose the layer you added to and click to display the drop-down menu or go to the Effects Control panel whenever you need to tweak the stabilizing effect.

Using Stabilize Motion feature to stabilize video is an old-school heritage function from the era of the Creative Suite, it will still be there in After Effects presently and performs admirably.

Step 1: The tracker panel is most likely open by default in your edition of After Effects, but if it isn't, go to Window in the top menu to open it. Once you've arrived here, scroll to the bottom until you locate Tracker and double-check that it has a checkbox beside it. 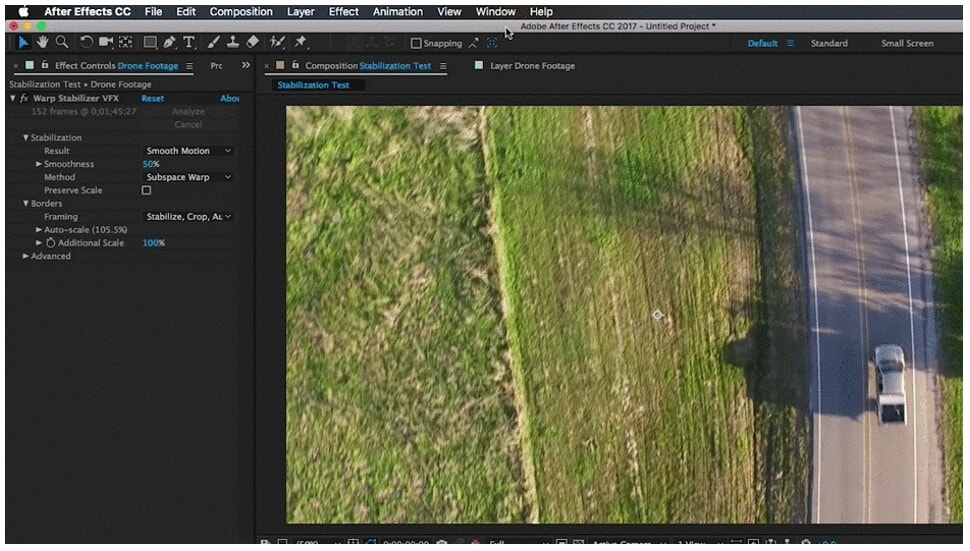 Step 2: Select Stabilize Motion from the drop-down menu whenever the tracker panel is open. You'll see that a tracker box appears in your Layer Panel once you've done this.

(Note: You'll need to identify a proper location in your film for the tracker to operate at this stage. We're monitoring a vehicle using a camera operator's drone in the instance below). 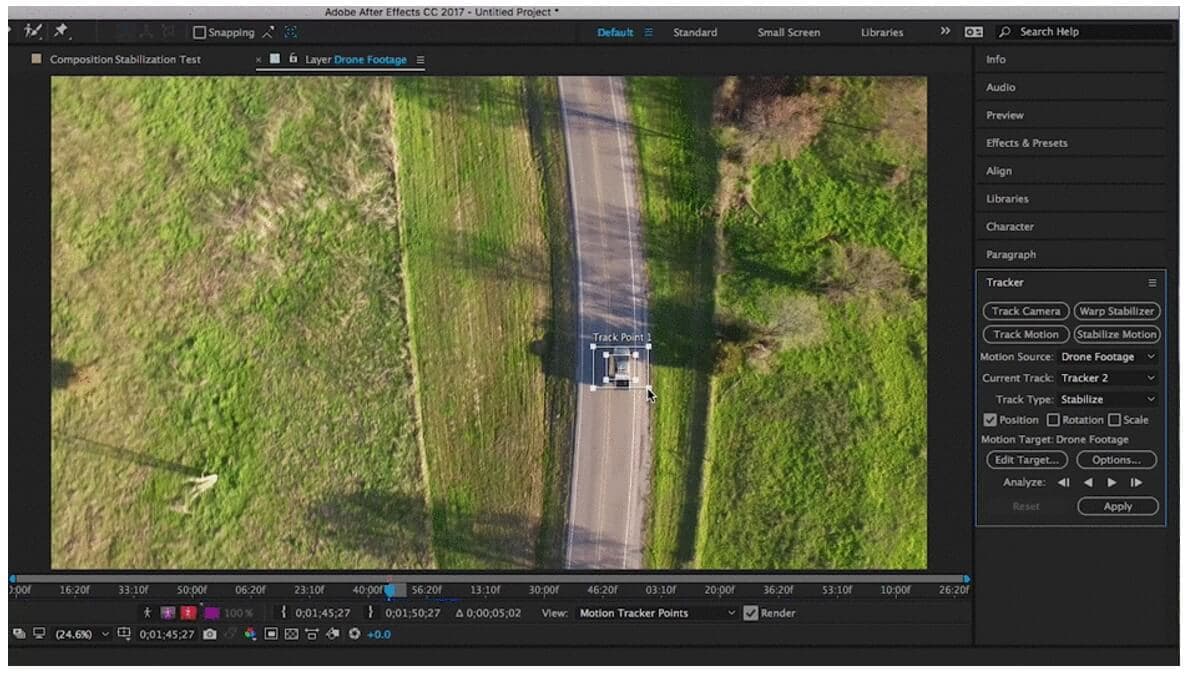 Step 3: Let's press the Play button on the tracker panel once we've set up the tracker box. The tracker box should adhere to the location or item you chose when you do this.

(Note: When your tracking points start to go astray, use the Pause button, personally modify the tracking point, and then push play to resume the journey). 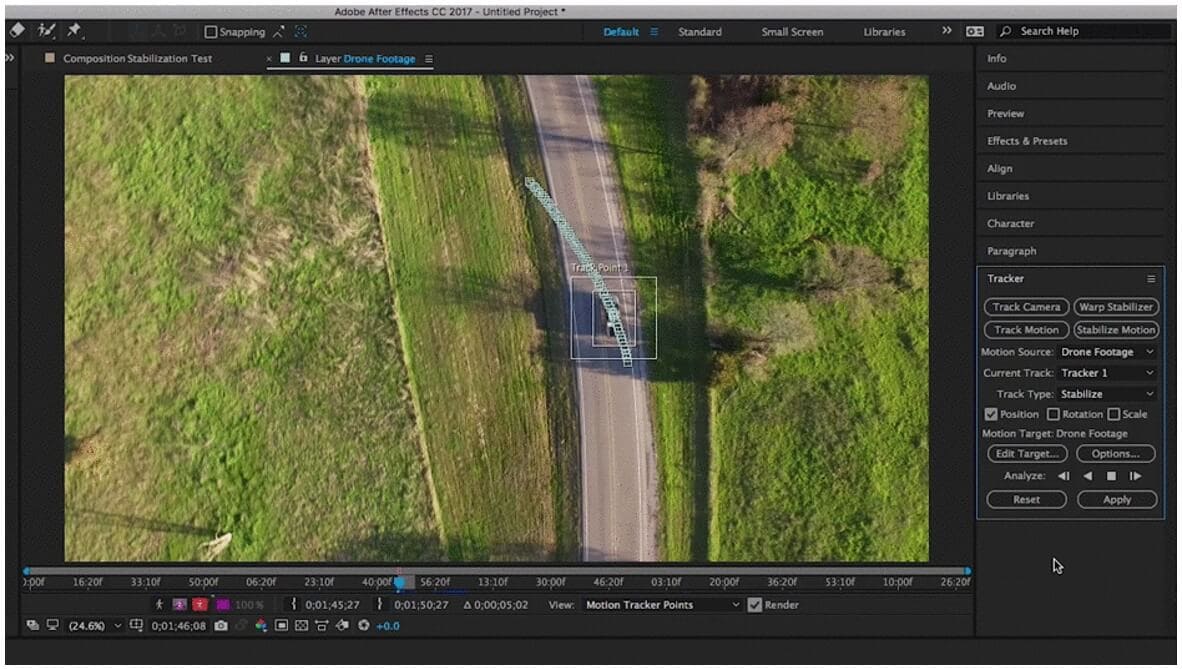 Step 4: When the tracker is done and satisfied with the results, click Edit target to verify that the tracking data is transferred to the correct layer. Then proceed to the bottom of the page and click the Apply option.

(Note A dialogue window with choices for applying them. Usually, you'll want to choose X and Y here). 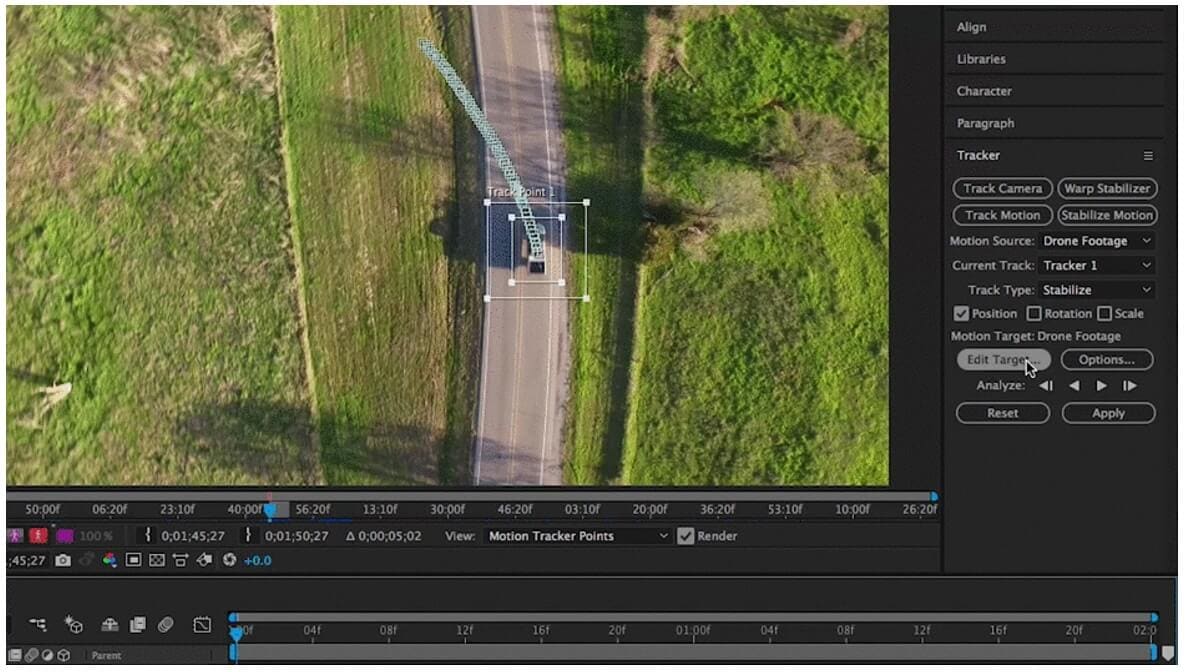 Hit the spacebar to evaluate how well the stabilize motion tracker performed now when you're back in the composition window. When you're not pleased with the outcomes, you might have to go back to try again. Although this approach is best used for photos with a clear point of focus that doesn't go out of frame, it could still be helpful in some situations.

As a graphic and motion designer, animator, or 3D artist, After Effects plugins may completely change the way you operate. Since it can handle so much right out of the box, Adobe After Effects CC is already a go-to motion graphic and compositing program for many artists.

However, as with any good program, third-party plugins could only help you take your work to the next level by adding new features or streamlining your process.

It should be unsurprising that After Effects has many plugins for a program that is over 30 years old. Here are the best stabilization plugins for smoother video in AE:

You would believe that making planets in 3D is simple —create a circle, add textures, and you're done! Getting a world to 'look' properly, on the other hand, might be more complicated than it appears.

For example, how can the line between night and day be altered in a model of a populated planet such that cities may be visible at night but not during the day?

Although Orb doesn't work for every planetary picture, this would function for 90% of them and is a helpful previs tool. This is particularly true when used in conjunction with other After Effects plugins or paired with a 3D lens from a 3D program, which may be brought into After Effects with background plates for things like spacecraft.

Richard Rosenman's renowned Photoshop depth of field generator plugin, DOF PRO (Depth of Field Generator PRO), is now downloadable for After Effects. DOF PRO has become the industry's professional option for an unprecedented and complex depth of field effects rapidly and effectively as a post-process.

This is thanks to almost a decade of discovery and application since the first launch in 2005. DOF PRO's cutting-edge characteristics offer new and advanced technologies not found anywhere else, resulting in one of the industry's most potent and sophisticated depth of field processors.

There will also be compatibility with the alpha channel and transparency, 32-bit floating-point color, correct aperture displays, and an iris array display. A feature comparison between the plugin and After Effects' Camera Lens Blur effect can be found here.

ReelSteady also has several other features that make it ideal for creating next-level tunes. Users may design filters to block off specific sections of your frame. This is useful for removing a subject that travels around the frame a lot.

In terms of performance, the After Effects plugin is pretty similar to the warp stabilizer but with a few more features. To begin with, ReelSteady includes a built-in rolling shutter repair tool that operates in tandem with its built-in stabilizer.

The ReelSteady effect is a two-pass effect. For instance, after the effect has been executed for the first time, you will likely wish to level out certain places. You'll successfully isolate specific parts in the effect to "iron out" sections of the footage.

You would like to record your film at a more excellent resolution than your expected outcome to get the most out of ReelSteady. If you wish to output your video in 4K, you might capture it in 4.6K or 5K. You'll have some leeway for ReelSteady to work its magic.

ReelSteady's sole flaw is its high price ($399). ReelSteady is not available in After Effects, unlike some of the other choices on this list. ReelSteady, on the other hand, is the way to go if you would like the smoothest footage imaginable.

Shaky video footage would be the last thing any video creator wants unless it's done intentionally for artistic or creative reasons. As a result, they employ methods and equipment to keep the camera safe from any undesired movement.

However, occasionally those tools aren't available, and the outcome is questionable. That is why we decided to compile this article to add to the knowledge of our readers how they can use After Effects to stabilize videos to enhance their video content!