Golden Ratio in Art: A Complete Guide for Designer

The changing world has completely changed human life. What they eat, how they travel, and everything. Even the perspective of photography has changed a lot since new things are being adopted. Photography that was once limited to a good lens and camera later focused on tips and tricks to glorify the photograph but using mathematics in photography might seem different.

Have you ever imagined that why the great painting of the Mona Lisa is so essential? Why is that considered a masterpiece? The answer to all these questions is the golden ratio in art. This might seem like a mystery box to many readers, but this, in actuality, is the magical technique you need to understand, and we will ensure that you learn most about it.

Part 1. What is the Golden Ratio?

Golden Ratio in art is a perfectly symmetrical relationship between two proportions, as indicated by the word 'ratio.' The golden ratio is closely related to the Fibonacci Sequence, which is the sum of the two numbers before it as, 0,1,1,2,3,5,8,13,21… and it goes on. Turning this sequence into squares and laying them side by side makes a rectangle. That later starts to form a spiral known as 'Golden Spiral.'

The ratio is approximately equal to 1:1.61, which is also known as Phi. A common illustration used for Golden Ratio can be 'Golden Rectangle.' For example, you take a rectangle, and you cut off a square from it. Surprisingly, after cutting the square, a smaller rectangle will be left behind with the same proportions as the original rectangle has. 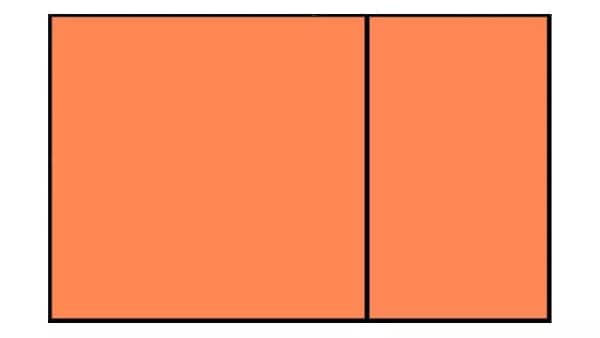 Hearing about this concept might sound new, but in actuality, this is old and already implemented. If we see our surroundings, we will find multiple examples of the Golden Spiral Ratio like hurricanes, flowers, galaxies, and even vegetables. Greeks used to use the Fibonacci Sequence in the early years to form visual patterns that helped them aid their designs. 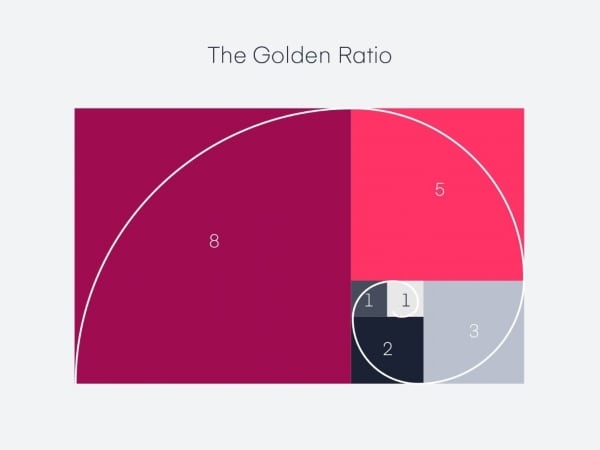 Talking more about its examples, it is used everywhere, in almost every field. The mathematical ratio has enormous usage in architecture, music, painting, and nature as well. Although art and design are creativity-driven yet, the golden section in art uses mathematics. It is linked to the Fibonacci Sequence, which has a naturally occurring sequence of numbers, helping to improve the layout, typography, and whatnot.

People need to know and learn about the golden ratio photography because it helps to create a beautiful, balanced, and aesthetically pleasing design that deeply satisfies a person. What else does a photographer need to improve their work other than a simple mathematical ratio that will do its magic to compose a balanced and organic result?

Part 2. Why is the Golden Ratio So Important?

The Golden Ratio has proved itself very helpful and vital. Not only for photography and art purpose, but we can also use the golden section in art. It can be implemented for making posters, marketing material, visiting cards, etc. The combination of mathematics with beauty contributes to making some fantastic masterpieces with aesthetic results.

The extensive usage of the Golden Ratio can be observed in almost every field. We will now share some more information regarding its importance;

Part 3. How to Apply the Golden Ratio in Art?

The golden ratio has enormous use in almost every field. It is widely used for photography, content, design and layout, and a lot more. In the same way, the golden ratio painting has been practiced and used very commonly. However, someone new to this mathematical implementation through Golden Ratio might not know how it is being used and practiced.

For any such person, this is the right platform to learn about Golden Ratio and its application. As of now, we will share about how a user can apply golden ratio in art;

Applying Golden Ratio to photography might seem difficult, but it is just a trick that people need to follow in actuality. The trick is to arrange the subject so that the image's focal point is within the spiral curve.

Professionally photographers use Phi Grid. This is done by dividing the Golden Rectangle and Golden Spiral into nine parts. The grid that is left behind will now assist you with the composition. 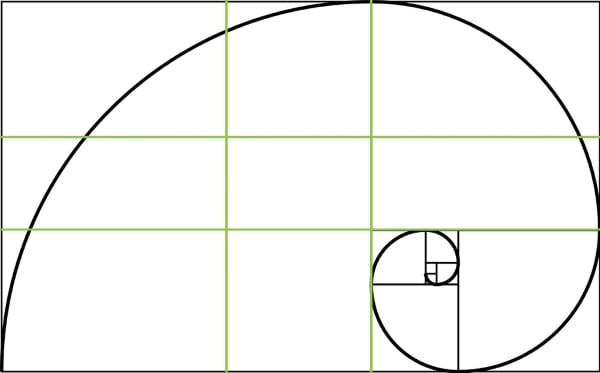 Working on a website or a graphic design, one thing that demands the most attention is the layout. The layout should be presentable, but you might not be able to design a flawless layout. For such a task user can get the best help from Golden Ratio. Let us explain how it helps and manages the layout for a page; 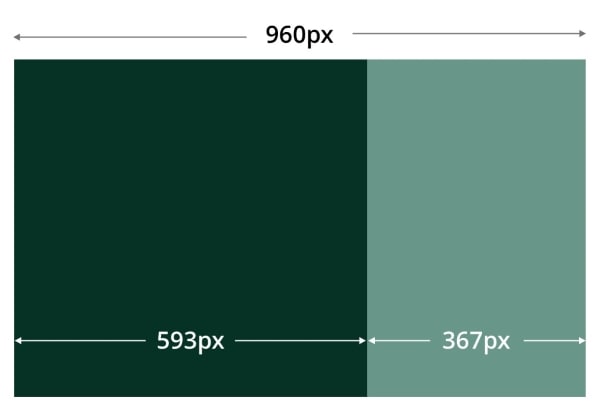 Hence, aligning components within the design can be done with much less stress using the Golden Ratio.

People generally cannot identify the negative and positive spacing. They don’t understand that the spacing element can either make or break the final result. Identifying spaces might consume a lot of time, and in case the user does not have that much time, then the user should seek help from Golden Ratio and let the squares guide you.

Using the diagram and the square will automatically do the job. This way, the user doesn't have to calculate the proportions from scratch as the Golden ratio adjusts the spaces accordingly. For instance, a user takes a Golden Rectangle and draws perfect circles (Golden Circles) in each part. Keeping in with the Golden Ratio, users can also reposition things as they want them.

These Golden Circles are beneficial for designing a logo. It doesn't matter if you are modifying an existing logo or starting from scratch. The concept of the Golden Circle will play its best part.

Content for any website or magazine is equally important to how it is arranged. For example, suppose you have unique written material, the editors have made the most effort to glorify the content, but the readers are still not attracted to it. Why is this happening?

This question might have two scenarios; either the content is not well arranged or else, not well written. The writing process can be managed and improved manually, but the content arrangement can be managed through mathematical involvement by using the Golden Ratio.

The content must be well arranged and well organized so that it instantly catches users’ attention. The more it is catchy and attractive, the more people will read it. Let the Golden Ratio diagram do its job and decide what is best suited where. Using Golden Ratio in design means that the user does not have to put in much effort to determine where each element should go. Does the question arise regarding how to apply it?

The answer to this question is that you are supposed to trace the Golden Spiral across the available space. Once you have done this, you will find out what the center is and arrange the elements accordingly. The important elements should be placed close to the focal point and less important towards the edge of the spiral.

Remember we discussed the painting of the Mona Lisa, that why is it considered a masterpiece? It was due to the Golden Ratio. The composition of anything can make it or break it. In the same way, pictures are also aesthetically pleasing and mesmerizing only if they are composed righteously.

Focusing on the subject and eliminating the negative space from the frame is an art itself that people fail to achieve. However, one thing that can help users and save their lives is the Golden Ratio. Using this trick, you have to split the image into three unequal sections, and then, by using lines and intersections, you can compose an image.

These measurements help the user compose something that becomes the focus of the attention of the viewer's eye. Just by keeping in mind the Golden Ratio, you can compose some beautiful images.

The article is a complete guide for users to understand the purpose of the Golden Ratio. Furthermore, the importance and application have also been discussed so that the user learns fully about it. Users who find it difficult to work across Golden Ratio can utilize the unique and constantly growing media available at Wondershare Filmstock.

Filmstock's massive library has a variety of sound effects and visual effects with the best video quality. All videos are high resolution. Not only video, but it delivers high-quality images on various subjects. The quality makes it easy for the user to rework the image. All resources from Filmstock can be easily found and used in the Filmora video editor. Download and try it below.

Learn more about Wondershare Filmstock by watching the video below.

Suppose you have 2 numbers. You add them and make the third number. Repeat the process till you have 20 numbers. Now, calculate the ratio of the last number to the second last number. The answer will be near 1.618. As the Golden Ratio is approximately equal to 1.618, this shows the importance of this figure.

2. How do you calculate the Golden Ratio?

You can calculate the Golden Ratio when you divide a line into two parts. The longer part is 'a' divided by, the smaller part 'b.' That is equal to the sum of "a+b" divided by "a," which equals 1.618.

3. Why is the Golden Ratio beautiful?

Everything that seems perfect and aesthetic has implemented Golden Ratio. It makes things beautiful naturally.

4. What is the Golden Rule in painting?

As Golden Ratio is implemented in art too. Hence, focusing on the subject using the Golden Ratio makes the painting beautiful, attractive and aesthetic.

Thank you for your comment. We will review it within few days.
You May Also Like
Monochromatic Color Design Ideas in 2022

Learn all about the monochromatic color and how you can include them in your designs flawlessly in the article below.

How to Make A Lyric Video Easily?

In the following article, you can learn easy ways to make a lyric video from scratch and some video templates for your music video by Filmstock.

Learn about 10 popular video effects templates by Wondershare Filmstock to add a creative and unique outlook to your broadcast videos.