How to Reverse a Video on Snapchat?

Snapchat has become one of the foremost popular chat applications for young adults and teenagers worldwide. Released in 2011, it gives you a choice to feature captions, drawings, and filters to your photos and videos referred to as snaps. Few people want to see the videos in reverse on Snapchat.

But, only a few people know about the Snapchat reverse filter. Don't worry if you are clueless about the reverse video Snapchat process. Since reversing a video, snap is as easy as applying a filter. This article will enable you to reverse Snapchat for iOS and Android versions quickly.

Part 1: How to Record Reverse video on Snapchat for free with the built-in filter?

Now that you need to know how to invert a video on Snapchat do not remain absent from this dialog. As you all know, it is beautifully simple to record a specific video on Snapchat. Like recording a video, turning around is also a pretty easy one.

Note: Video duration should not be more than 10 seconds.

Step 1: Begin to record the video.

Open your Snapchat, then move to the camera screen. Later, capture a specific video clip by holding down a button display within the middle of the screen.

Step 2: Turn around the filter effect.

After capturing a video on Snapchat, another step for you'll be to undertake to go for a turnaround channel there that is swipe to the left. By swiping, you'll discover the reverse option alternative quickly. When you reach after swiping, you will find several types of filters. There, stay on the reverse screen.

After switching your video to reverse mode, you'll be able to share it with your companions. If you want to include more impacts in the video, tap the symbol button on your right side. Doing so will empower you to add effect. That's all for turning around a video on Snapchat. Finally, you will get the reversed video with varying speed options. 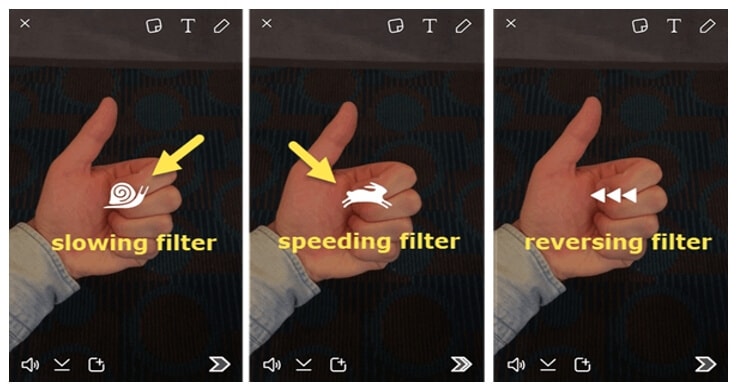 You may also like: How to slow down video on Snapchat.

Part 2: How to Add Reverse Effect to Existing Videos on Snapchat?

This strategy works for both recordings you previously took with the Snapchat app and those you transfer from your phone's collections. Follow the following step guidelines to reverse video on Snapchat.

After landing on the main screen, you will see the camera icon. Swipe up the screen. You will see different options. Either choose the short video of duration less than 10 sec from 'Snaps' sections for a video you had previously recorded in Snapchat. Or else you can go for 'Camera Roll' to select a video from the phone camera Gallery.

Tap on the three-dot symbols on the upper right portion of the screen to open the menu. Tap on ‘Edit Snap’ from the given options. Swipe Left and find the reverse filter in Snapchat from all the filters. Selecting the reverse option will enable the Snapchat reverse filter effect on the selected video. 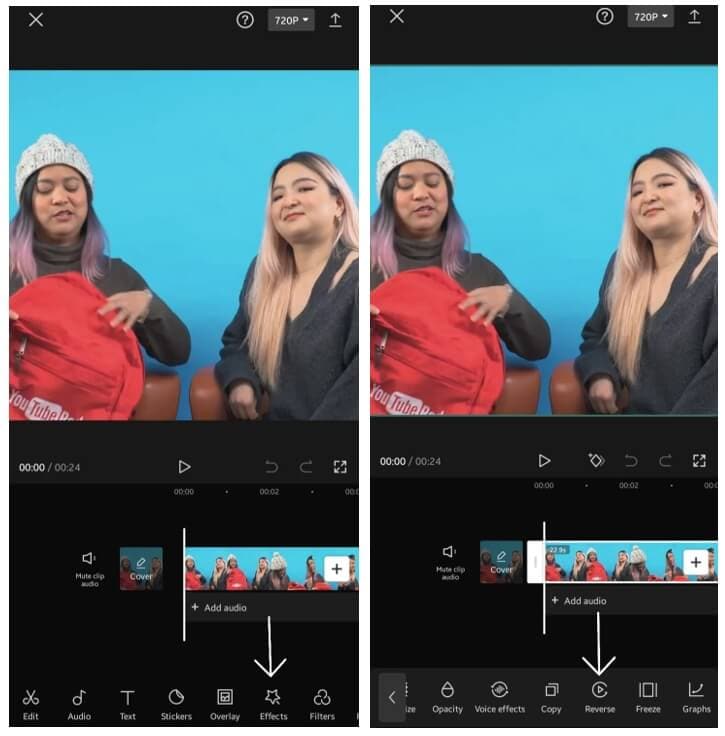 CapCut may be a portable app for iOS and Android gadgets, mainly created to complement the essential video altering highlights of the famous social stage. Several critical features of CapCut, bring it unique for social media. For example, Split function, Speed control, High defined filters, effect, and many more.

But if we talk about its reverse feature, a triangle-shaped figure inside a circle icon is known as the reverse feature in the software. This is not so tricky to use. But you can use this feature only on short videos. You can reverse it in slow motion after applying high-quality effects in your video. This version is available on iPhone as well as on Android devices.

You can check this article and find out the details about how to edit videos with CapCut.

Wondershare FilmoraGo is the most recommended video-altering computer program that creates astonishing recordings productively employing a vast extent of powerful altering devices. Wondershare FilmoraGo uses a delightfully realistic plan that makes it simple for anybody to become an incredible video editor.

FilmoraGo is the most suitable app for video playback and reverses the video. And not only this, it has many other features that may facilitate your videos more engaging. If you're trying to find an all-around video app, FilmoraGo is the one for you. It has various kinds of critical features of Wondershare FilmoraGo. For example, support to 4K editing, GIF, Noise removal, Advanced text editor, etc.

Talking its reverse feature is the ideal thing. It has professional tools for reversing video. Your videos will become more attractive through reverse, and additional features and concise videos will be on top. 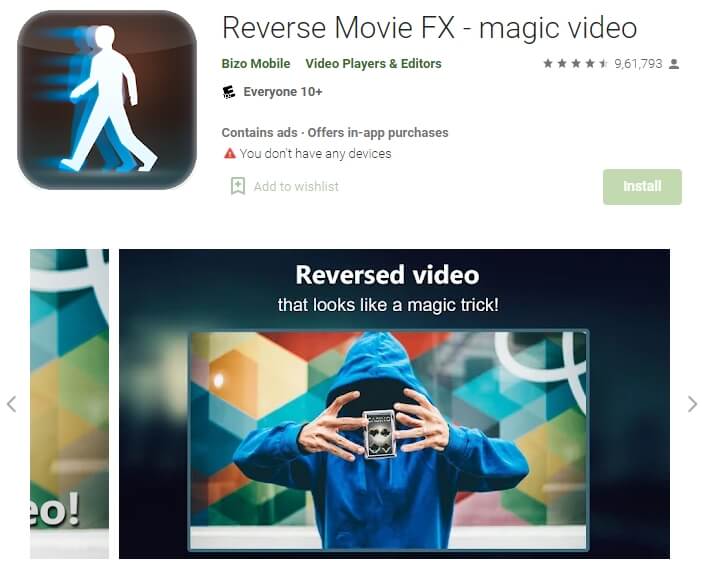 If you need to turn around your recordings uploaded on Snapchat, Motion picture FX can make the difference. To begin with, record a video. Then, follow the steps to select the motion picture part, and press, begin. Switch Motion picture FX will start switching a video.

The main features of Reverse Movie FX- magic video are: Reverse Motion FX - Magic video carries colossal highlights for turning around a video. You will discover staggering liveliness and imaginative moves in this application. It has a smooth altering interface and timeline. You can include an inverted impact to your video by fair tapping an alternative.

Part 4: When Should You Apply the Reverse Filter to Video on Snapchat?

Reversing your video on Snapchat reflects how to show off a chain of occasions backward. This clear-out out is frequently satisfactory carried out to action-packed videos. For illustration, consider something as straightforward as dropping a shake onto a frozen pond that breaks through the ice. Rather than watching the ice smash after the video, you may apply the turnaround effect to appear the broken ice is coming back together as the video film plays in reverse.

Here are a few tips to assist you with the Snapchat reverse filter.

In the end, we hope that all your queries get cleared while reading this post. There are a few questions answered like:

Thus, I hope your queries are explicit after reading this post.

How to Do Screen Record Snapchat on Mobile Phone?

Snapchat is the most popular app these days to create snaps streaks. The article provides an outlook to screen record Snapchat on Android and iPhone effortlessly.