What is Frame Rate and which one to choose?

The term frame rate is one of the oldest terms in cinema history, and it is equally important today as it was when the first camera was invented. Today, frame rates are not strictly related to cameras and movie projectors, because the quality of animations, video games, live online streams or TV broadcasts is also directly influenced by frame rates.

Even though modern day cameras enable you to capture incredibly smooth footage when using the automatic camera settings, understanding the concept of frame rates is going to help you know exactly when you should increase or decrease the frame rate of your video. This requires you to know how cameras or other video capturing devices record footage, and in this guide, we are going to introduce you to the basic concepts that govern the video capturing process.

What is Frame rate: A Short History of Frame Rates

A frame rate is simply the frequency at which independent still images appear on the screen. This means that you can choose the number of stills that are displayed in one second. If you increase the number of frames per second the figures in the shot will appear to be moving slower, while if you decrease the frame rate the characters in the shot will move faster, like in the early Charlie Chaplin movies.

As a matter of fact, during the period when Chaplin made his first silent movies, all cameras were cranked which means that the camera operator had to roll the handle in order to start recording. Maintaining the permanent frame rate manually is not easy, which is why frame rates were much slower in the early years of cinema, as they varied between 16 to 24 fps.

The human eye can see as much as 10 or 12 images per second and process them separately, while 16fps is already perceived as a movement. However, in videos with lower frame rates movements appears jerky, while the characters move at unnatural speeds.

In the late 1920's the industry standard frame rate was set to 24fps, and today almost a hundred years later, nearly all movies are filmed at this frame rate. The reason for the standardization of the frame rate was the sound, because frame rates were and still are, used to sync the audio and video tracks.

Frame rates higher than 24fps were commonly used even before the invention of the television in the 1950's, which used 30fps as an industry standard. Using frame rates higher than 30 fps was possible in the early days of cinema, although the results were far from the image quality modern day cameras and displays can produce.

A large majority of DSLR and movie cameras offer only three different frame rates, the standard 24fps, 30fps for those who want to produce videos in the style of TV shows, and 60fps for sports and all other scenes that involve rapid motion.

1 - 16 FPS - If a frame rate of a video is less than 10fps, the viewers will be barely able to see continuous motion. Even if you are trying to recreate the style of silent era movies, it is highly unlikely that you will ever use a frame rate that has less than 16fps, because the video won't have the illusion of movement. At 16fps you'll be able to get the effect similar to that of a silent movie as the characters will move faster than they normally would. However, the footage captured at this frame rate often looks choppy, and for that reason, it is rarely used in modern film and video production.

24 FPS - Unless you are working on a project that demands higher frame rates chances are that the majority of the footage you ever recorded was captured at 24fps. If you choose to shoot at this frame rate your videos will have a cinematic look, although the footage may not seem as smooth as it looks when it is captured at 60fps. Gamers can also use this frame rate in their screen capturing sessions, although screencasting some demanding video games may require larger frame rates so that the videos appear perfectly smooth.

25 FPS - The frame rate 25P is not very much common in the United States. The reason being, most of the electronic equipments like cameras and camcorders, used in the US, offers multiple of 30 or 60. The videos can be easily converted to 25P. This edge rate derives from the PAL TV standard of 50i (or 50 tangled fields for every second). Film and Television organizations utilize this rate in 50 Hz locales for direct similarity with TV field and edge rates.

30 FPS - Live TV broadcasts and a lot of TV shows are recorded at 30fps in order to increase their quality. Live sports events broadcasted on TV must look realistic, which is why a higher frame rate is used so that running or jumping would appear as if they are taking place in real time.

60 FPS - Until the invention of 4K video resolution, only a small minority of cinematographers used this frame rate. However, the 4K videos benefit from higher frame rates, because they give the footage an incredibly detailed and realistic look. Capturing gaming videos at 60fps can help you reduce the choppiness and create a video that depicts the on-screen movement truthfully.

120 FPS - If you would like to produce a slow-motion video then you should use this frame rate. Gamers often capture their videos at 120fps when playing video games that contain a lot of rapid movement, like car racing or fighting games.

Over 120FPS - Recording videos at frame rates higher than 120fps requires you to have a high-speed camera. Even though it is possible to capture videos at frame rates as high as 250fps, animation artists, videographers or gamers are highly unlikely to ever be in a situation when such a high frame rate is necessary so that the video looks natural.

Why Frame Rate is important in videos?

Frame Rate will impact the viewing experience, so it is important to choose a proper frame rate based on your needs. In most case, the frame rate of a movie is 24FPS, because 24FPS is similar to how we see the world. But if you want to see more details of the video, you should choose a higher frame rate, such as a sporting video, which will show a lot of details. Lower frame rate will drop some details and it is widely useful when creating animated GIFs.

Choosing a Frame Rate for Your Next Video

There are only two practical reasons to use non-standard frame rates. The first one is purely stylistic and it depends on the type of visual style you're trying to create in a video. If you want to produce a video that resembles a TV show, then raising the frame rate from 24fps to 30fs can help you achieve the desired look.

The second reason to use high frame rates is to capture the movement within the shoot more smoothly. At 30 or 60fps, your videos are not going to have choppy playback even if you are recording events such as Formula 1 races where objects in the shot move at incredible speeds.

The process of selecting a frame rate for live video stream is slightly different then the process of choosing the frame rate for a video you record with a camera. When sharing videos online from your computer, you don't have to focus so much on the quality of the video, since it is not going to be displayed on large monitors. However, if you want to have perfectly smooth motion in the video, you should consider raising the frame rate to 30 or 60fps. It is important to make sure that your computer is capable of displaying high frame rates since some processors can only display 15 or fewer fps which won't be enough to see the results.

Keep in mind that higher frame rates increase the size of the video because instead of 24 images in one second a camera captures 30, 60 or more images per second. Working with large video files requires you to have a lot of storage space and patience as uploading videos that have more than 10GB to the Internet can take a lot of time.

How to set video frame rate in Filmora?

To change the Frame Rate at the video output in Wondershare Filmora is easy. In the output window, click the Settings button to enter the Settings interface. Here, you can change the frame rate, bit rate as well as the video resolution and audio settings. Go to Frame Rate option, and select one target FPS value from the drop-box menu. And then click OK to save the frame rate setting. In this way, you can change and converter the original frame rate to another frame rate. 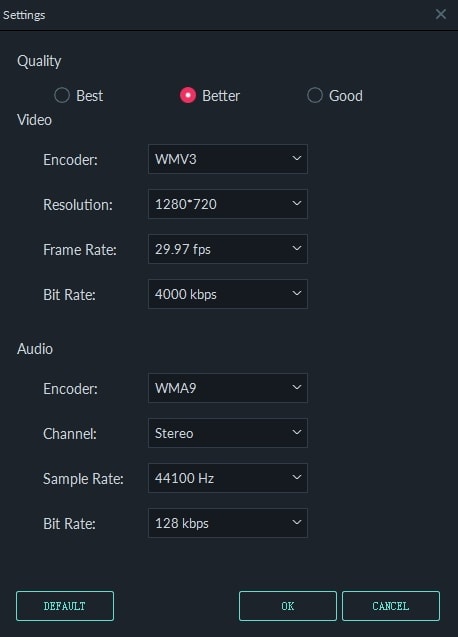 You can then save the video to your computer, or upload to YouTube and Vimeo as well.

Note: When you choose a higher frame rate, the video file size will be bigger and the exporting time will be longer as well.

The number of stills a camera can capture in one second or a video playback device like a movie projector, TV set or a computer monitor can display influences how we see moving images. As the number of stills rises the picture becomes more realistic because the camera can pick up more information. The style of the footage changes as well, so using a standard 24fps frame rate enables you to get the classical cinematic look, while higher frame rates create a style we commonly see on TV.

You have to consider frame rate when working with activities on the grounds thatcan influence the execution of your SWF document and the PC that plays it. Setting a frame rate too high can prompt processor issues, particularly when you utilize numerous benefits or utilize ActionScript to make your film. On the other hand, you likewise need to consider the frame rate setting in light of the fact that it influences how easily your movement plays.

As each type of the frame rate has its own pros and cons, therefore, it depends upon the requirements of the video/film, which one needs to be used. As mentioned earlier, the greater the frame rate, the greater will be clarity. If you are filming a 3D movie, you may go with higher frame rates, whereas lower frame rates still give real , clear and cine like effect. Frame rates are used widely to enhance the clarity and coherency of the film/video. While higher rates are used in 3D films , lower ones find their way to videos where real effect is required.

Besides frame rate converting and changing, you can also convert your video format to another format such as MP4, WMV, AVI, MOV, F4V, TS, GIF and WEBM, or change the 4K resolution to 1080P, 720P and more. Wondershare Filmora will always empower your videos. Check the video below to find out more features of Filmora.

Thank you for your comment. We will review it within few days.
You May Also Like
How to Remove Subtitles from a MKV,MP4,AVI Video

It is not difficult to get out subtitles if you can find the best video editor. This article is a complete guide on how to Remove Soft and Hardcoded Subtitles from a MKV, MPV, AVI Video.

How to Remove Logos from Videos