What is Aspect Ratio?

So, what is the aspect ratio, and what to do with it? You'll soon find out in this article.

The definition of aspect ratio

The average TV set today deals with this proportion between width and height. Most generally it is expressed in the width/height format or W:H or as in a width or 16 units and a height of 9 units would be put in as 16:9. This has been quite a problem between television manufacturers and film making companies for many years.

With the newer models of TV’s this has also become a concern to TV users on the consumer end. Almost all movies are produced in the 21:9 aspect ratio. If it is converted to a smaller ratio the viewer will lose some of the picture. It cannot be avoided. In older TV’s the aspect ratio was just a mere 4:3. There are in most TV’s today an aspect ratio of 16:9 which is a great viewing ratio. However even in that ratio the TV viewer will see a black bar at the top and bottom of the screen while watching the video.

There are some TV manufacturers today that are producing 21:9 aspect ratios to give that 100% movie picture ratio you see at the theater. (Nice to know fact: When watching a movie at the theater you ever notice that the curtains are normally drawn in during the pre-show ads and opened for the movie? That cause most ads are 16:9 while all movies are 21:9.) Neat, huh? Prior to purchasing a TV with a 21:9 aspect ratio, keep this in mind.

If you normally don’t watch anything except movies, a TV with that 21:9 ratio will be just great. But if you watch a lot of TV shows as well, those shows will have the black bars on all of the TV shows. As an example, a 58” TV with a 21:9 aspect ratio will be the same as watching a 47” TV with 16:9 aspect ratio. In other words you will be downsizing your content to the normal 16:9 ratio while watching all the regular TV programs with black bars on top or the sides. (By the way, those black bars are known as ‘letterboxing’.) If there is any mismatch between the aspect ratio and the movie you are watching and the aspect ratio of the TV you will find those pesky little black bars.

As mentioned before when movie studios began producing their first movies they were in the 4:3 ratio and that was just fine. However when they added sound to the movies the ratio changed ever so slightly to accommodate the sound track. For the next twenty years. It was known at the time as the Academy Ratio. 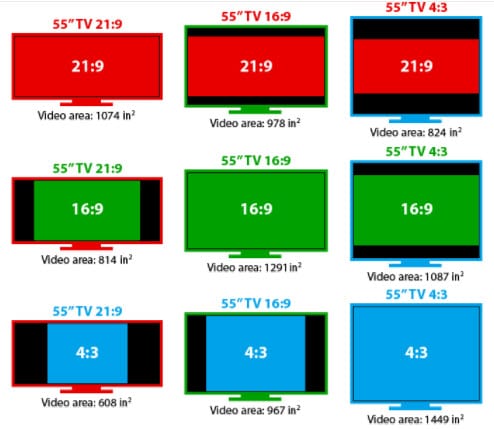 The development of aspect ratio

When TV came into play in the 1950’s it scared the movie makers to death. They just knew that would be the end of their run. So beginning in 1952 they came out with Cinerama which had a 2.59:1 aspect ratio and the race for bigger and better was on. The movie goers were in for the ride of their lives and they got one.

In 1959 the great movie Ben-Hur came out and it had a ratio of 2.76:1 and it was a spectacular hit at the box office. However that little brat that had started the movie makers trend toward bigger and better hadn’t changed at all. With the new movies coming out, the TV’s were showing all these danged black bars. The letterboxing was wreaking havoc on the poor little TV’s.

This was perpetuated until the late 1980’s. The solution was not a good one for TV. It was known as ‘pan and scan’. What it did was made physical adjustments to the films in widescreen and without actually distorting the image. It did this by chopping off the sides and keeping in the viewing area what the person doing the ‘panning and scanning’ thought to be the most important.

As we proceed into the future there have already been some fantastic changes in filmmaking such as IMAX and we will surely keep on getting better still. Now that you understand what aspect ratio is, maybe you can see now what’s going on with your TV and you can change the settings to better fit how you prefer to watch movies while at home.

How to change the aspect ratio in a quick way?

For different needs, you can freely choose your way to change the aspect ratio of your video. For example, you can change it when uploading your video to platforms like Youtube or Tiktok. Usually, they provide options for the best aspect ratio to display your video.

As for other users, Mac or Win, can learn the trick here: How to Quickly Change the Aspect Ratio of a Video on Mac?

Thank you for your comment. We will review it within few days.
You May Also Like
How to Add External SRT Subtitles to Video