Download on the App Store
Get it on Google Play
Download
Download
Call us: +1-60-4343-8521
Mon-Fri 6:00 PM to 11:00 AM Pacific Time
International phone rates may be charged by your service provider
Filmora Video Editor
Best Blender 2.8 Alternative for Beginners
Try It Free Try It Free

Motion tracking refers to tracking an object's movement and further applying the same tracking data to other objects' movement. It can be another layer or an effect control point. You can also track multiple items in a scene. So, being an animator, whether beginner or professional, you can't ignore these motion capture technologies. The motion tracking, especially the Blender motion tracking, will give you a realistic animation experience, as discussed below.

Blender 2.8 got released last year with new and exciting features that users were waiting for a long time. All in all, it is a game-changer for the industry due to many reasons. Some of those reasons could be ease of use, real-time rendering, powerful viewports, improved animation editor, and professional and realistic touch to the entire platform.

So, here are some uses of Blender 2.8 motion tracking.

Follow the six simple steps to use the camera tracking feature of Blender 2.8 to extract the motion of the camera from footage and further create an explicit digital scene that well compliments.

Load your video into the sequence editor Blender. Then, set your Start and End frame at 1 and 100, respectively and render the image format to JPEG because of small size images. 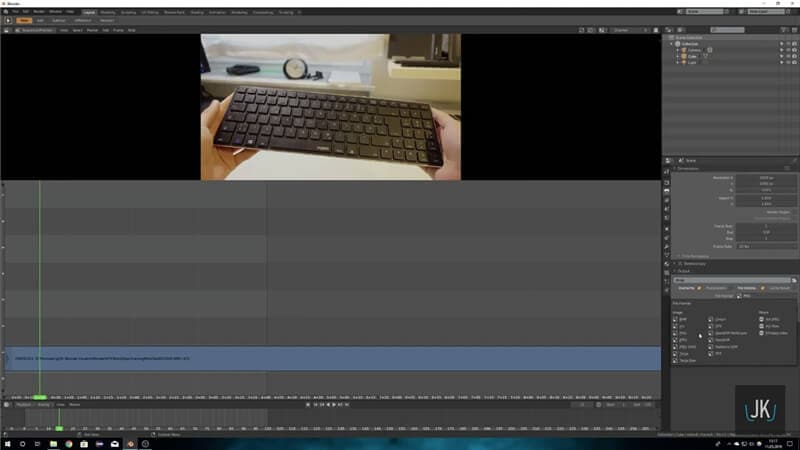 Go to the Movie Clip Editor and go to the frames. Select the Track tab given on the right side and hit the + icon on the Camera tab to select Object. 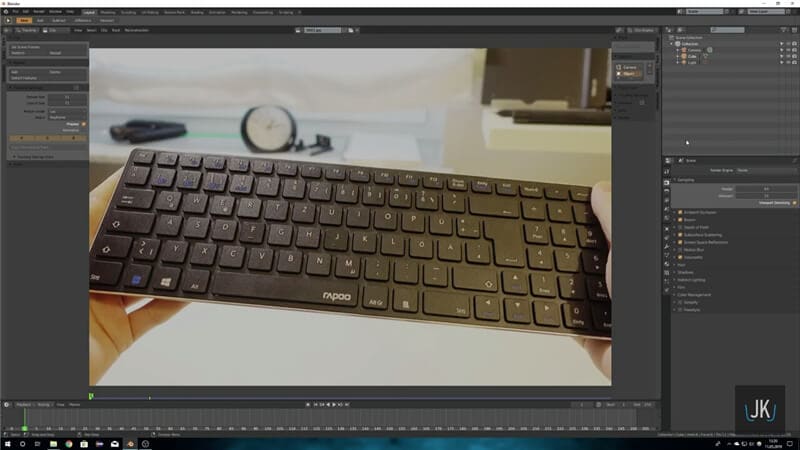 Enter the correct sensor width. You can Google also to know the proper sensor width. Then, go ahead, and press Detect Features to delete all the markers that won’t work. Then, press Ctrl + T.

When all the tracking markers track correctly, go to the Solve tab, and select Solve Object Motion. Try to get the Solve error below 0.5. 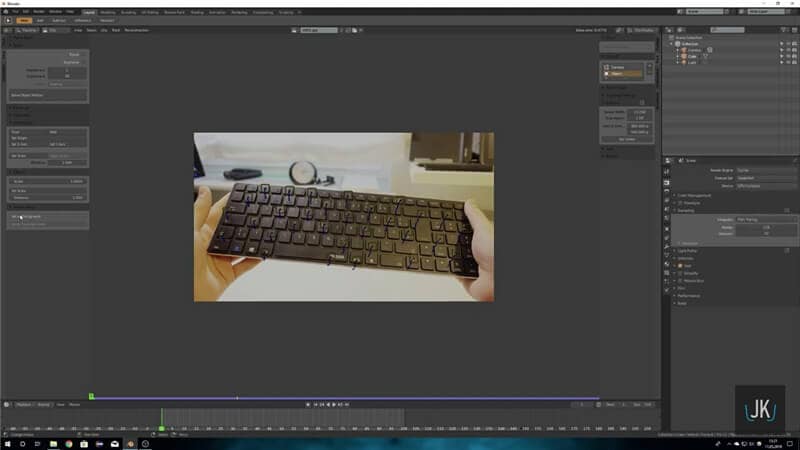 Go ahead and set the Render Engine to Cycles and set the video in the background. Go to Overlays on the top and checkmark the Motion Tracking. 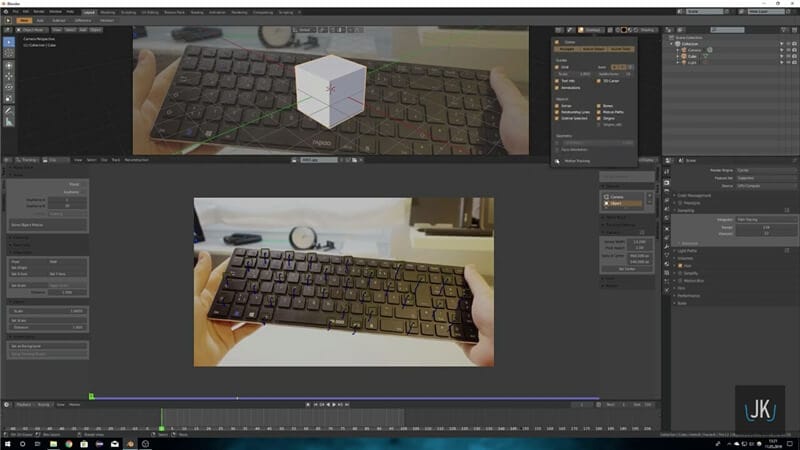 Now, set the constraints on the side. Set the Object as Object and Camera to Camera and try to align the Object on tracking points to sit well over there.

Do the same thing with plane, which is the shadow catcher. You can copy the Location and Rotation so that it sits on the cube.

After you position everything, go to the Cycle Settings and checkmark the Shadow Catcher. 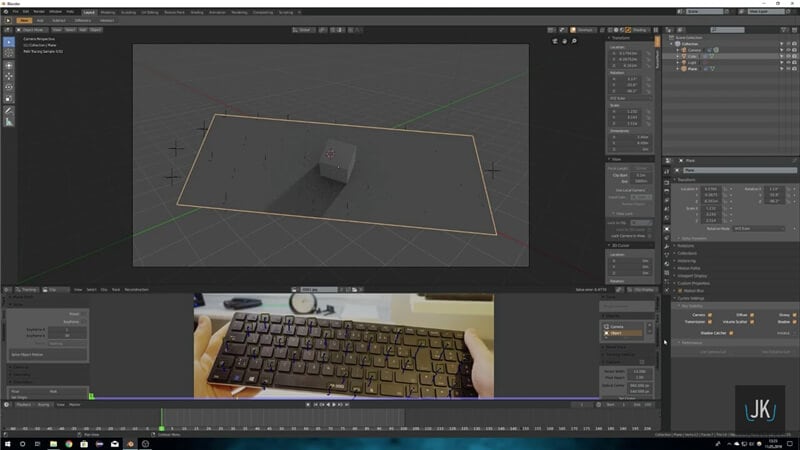 Also, set the Background as Transparent. You can now see the object with its shadow over the area you want to track. 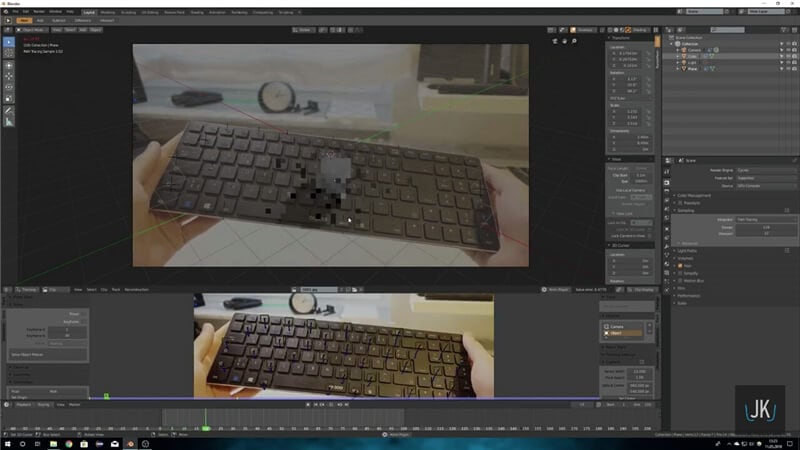 It helps to know when you filmed, and you also get to know the light source. However, one light source is better for 3D work because it would be tough to replicate with complicated lights. 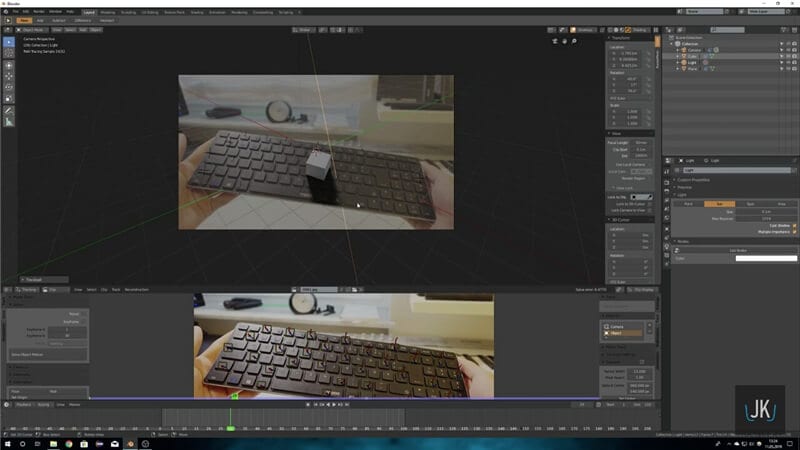 Then, you can test render to see if all goes right. 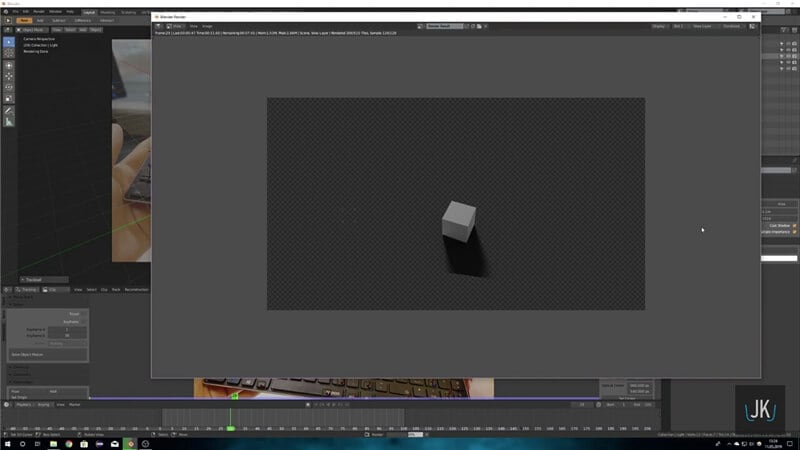 You all know that placing a 3D model over footage won't look good if you don't make efforts to make it real. If it's the case with you, too, the camera tracking feature of Blender 2.8 will not disappoint you.

Get introduced with six simple steps on how to do motion tracking in Blender 2.8 on Mac devices.

Yes, for Blender 2.8, first prepare the media into a specific format. After recording and transferring the video to your Mac process is over, launch Blender 2.8, a free plus an open-source platform.

Open Blender 2.8, select Video Sequencer, and hit the Add button to convert video format into an image sequence. Then, go towards the right menu and click the Output tab to save it in PNG format. 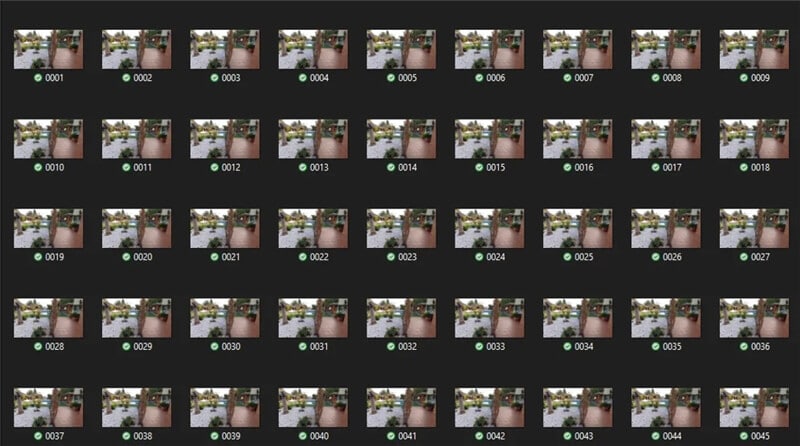 Check how the video is playing inside the Blender and if it is playing slow, click the Prefetch > Set SceneFrames button to match the total number of video frames. 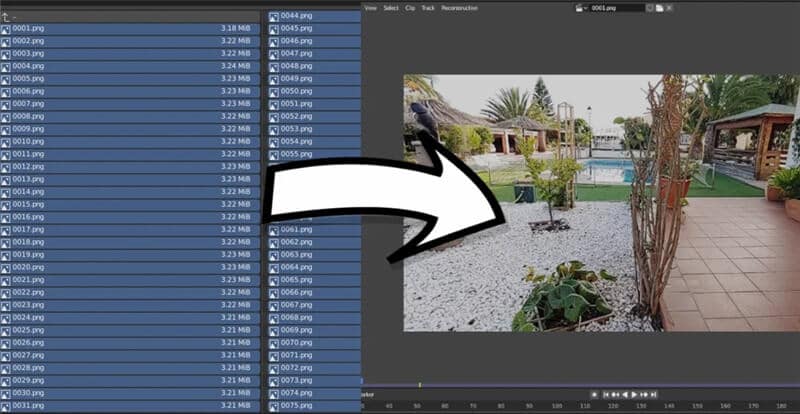 First of all, you are required to change the Tracking Settings as follows.

Then, add at least eight markers on the areas of footage that are easy to track. You can choose white stones on a dark floor, golf ball on the grass, or different tiled floor patterns.

Hold Ctrl key and right-click to add the trackers. Then, the small white squares will appear, which you need to place over the footage you want to track.

You can press the “S” key to scale up the markers. 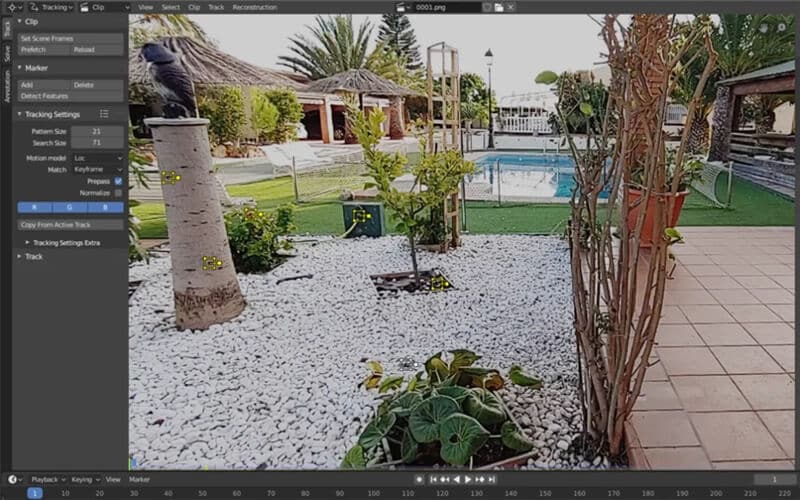 It's time to track the footage after you complete placing the markers. You can press Ctrl + T or Alt + Right-arrow to track the real footage. 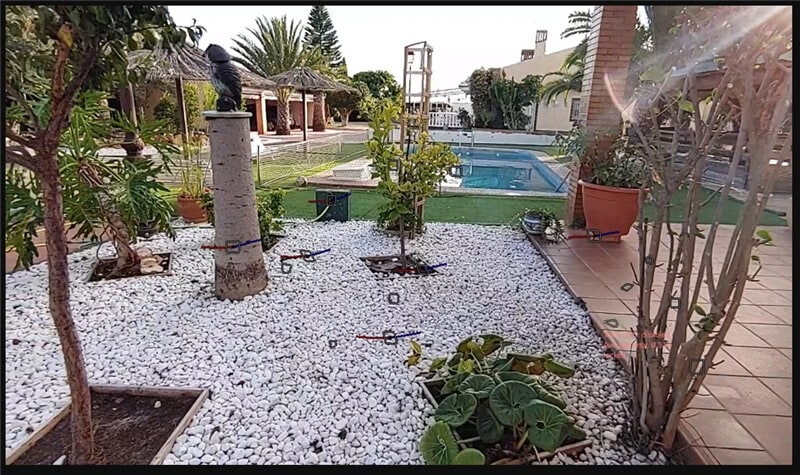 Solve the camera motion as follows.

Lastly, hit the Solve Camera Motion button. Remember to keep the average error below 0.5 for good results by enabling the Info box under the Clip Display tab.

Now, you should delete the markers with the high average error, or you can lower their weight by reducing to 0.6 under the Track menu. 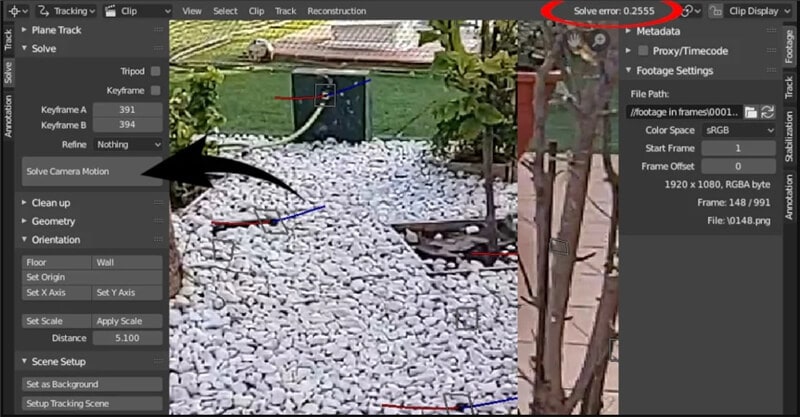 After tracking the footage, the last steps are to make some 3D settings. Go to Scene Setup under the left-menu and hit the Setup Tracking Scene button.

Then, go back to the Movie Clip Editor and admire the following options under the Orientation menu.

Choose one tracker to be the origin, the one above it to be the Y-axis, and the side tracker to the source to be the X-axis. Then, choose three trackers making your scene floor more or less and hit the Floor button.

Lastly, you need to choose two trackers to set an appropriate scale.

Part 4: How to Fix “Blender Motion Tracking Not Working” on Mac?

After learning Blender motion tracking animation, you will face the following troubleshooting issues. Don't worry as we will discuss the solutions below.

This error usually comes while trying to solve the camera motion. If it persists, make sure you have added at least eight trackers, as discussed above, in the proper tracking steps. You should track them correctly tracked for every frame you use.

On the other hand, you should also check whether the camera and lens settings are to their correct values. After doing all the right steps of Blender motion tracking, the problem will most probably get resolved.

If you get to see red marks while tracking the footage, it will suddenly stop monitoring. Well, it's a common issue if your footage is pretty hard to follow.

If the issue persists, leave that marker alone and try to replace it with a new marker.

These are the two most common troubleshooting issues found with regards to motion tracking in Blender2.8.

Hopefully, you have clearly understood every aspect of Blender 2.8 motion tracking or camera tracking in the above tutorial. Motion tracking is a crucial skill if you are into Animation and want to go professional in the future. If that's so, make sure to nurture your motion tracking skills through similar tutorials, where you also learn the common troubleshooting issues.