The Parrot drone has become one of the most popular quadcopters on the market for its autonomous flying. The original version of the drone was incredibly fun to fly but the Bebop 2 makes new improvements in performance, battery life and video quality. Although the controls for the Bebop are not as precise as some other types of drones on the market like DJI Phantom 4, the performance and the attractive video that this drone can capture make it a true performance leader in the market.

The Parrot Bebop is a drone that was in development for over two years since the initial release of the original drone. It comes with a very reasonable price point at under $600 and it is capable of completing over 25 min of autonomous flight before going back to base. The specs on this drone make it a leader in amateur filmmaking, photographs and more. This is a drone that's well-suited for use both indoors and outdoors and they commonly go on sale allowing many people to start up their drone hobby without having to invest thousands of dollars. 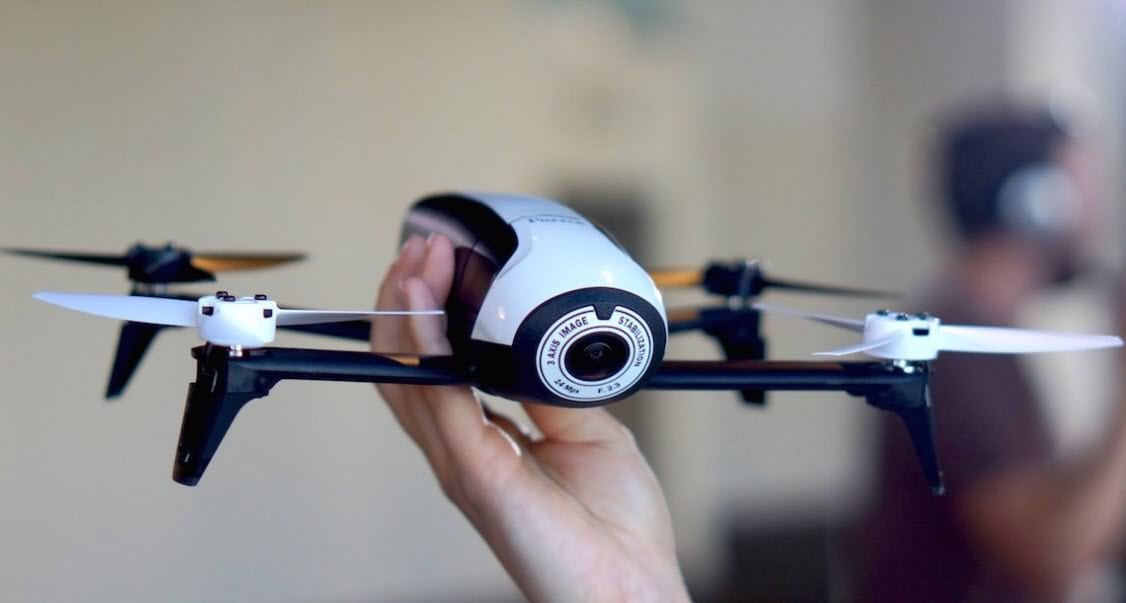 Pros and Cons of Parrot Bebop 2

The main features for this device are it's improved stable movement with a three axis accelerometer and ultrasound sensor. These improved sensors and waypoint controls make the process of actually flying one of these drones very easy. The motor is also known for its speed and its capable of reaching a height of 100 m in just 18 seconds after takeoff. This is a very fast and highflying drone. The improved battery life of up to 25 min. with a 2700 mA battery is a considerable improvement for this drone as well. The two nicest features which are available for new drone flyers are the return home feature where you can set a waypoint for the drone to land after it runs out of battery as well as the free flight three application. The free flight application is one of the easiest ways that you can control your drone with the help of a tablet or smartphone and set waypoints for capturing the shots you want.

The design of this drone has definitely been improved for performance as well as resiliency. The previous version of the parrot was fairly simple to break but this newest version is much stronger and easier to control especially with the help of the application. This is a drone that has definitely been designed with beginner users in mind. The only design flaw with this drone is that the camera was not updated in any way. Parrot makes the process of ordering extra parts extremely simple through their online store and you can keep this drone running over an extended amount of time quite easily.

This is a high-performing drone that has great stability controls and an application that can ease the process of flight. The return home feature helps to protect the drone in the event of a battery problem or when the user is finished filming. As landing these drones can be some of the most difficult aspects of operation, flight performance with a return home feature is one of the easiest ways to protect it.

The 14 megapixel fisheye lens camera is backed up by 8 GB of onboard storage. The cameras capable of capturing 1080 P video at 30 frames per second and it does produce a fairly good quality image. Some users have made light complaints about lens flare and a few other distortion qualities but overall, it's difficult to find a drone and camera built in combo that can produce an image this good, for the same price.

The free flight app is a huge asset to this drone. Not only can you use controls from your smart phone or tablet to see from the drone, but you can also set waypoints using the tablet using GPS functions and rely on the autonomous flight capabilities as well as the return home functions.

Thank you for your comment. We will review it within few days.
You May Also Like
Complete Review for DJI Inspire 1

Undoubtedly, DJI Inspire 1 was made for professionals but is as easy to fly and control as consumer drones like DJI Phantom 4 or Phantom 3.

DJI Inspire 2 drone is designed with all advanced features that is why it is first choice of most of filmmakers and deep pocket buyers.

Yuneec Typhoon H is especially designed to meet customer's requirements with all high end design capabilities that can be accessed at suitable price range.