How to Create Light Leak Overlay to Your Videos or Images?

Photography is all about light. A good photographer considers all lighting angles to bring the best output to the world. In the same way, the addition of light leak phenomena to the pictures and videos creates an awe-inspiring impression on the audience.

A light leak overlay used to be considered an error in traditional photography. The overly exposed color variants on the image or video showed that the camera body absorbed the light, which it wasn't supposed to. The light leak is a diffused glow that lightly obscured part of the image. The effect is popular as it brings ambiance and authenticity to the output.

The Luma matte transition is an exciting way to launch the video. The article introduces Wondershare Filmora and how it helps the user apply light leak film overlay effortlessly.

Part 1: How to Create or Apply Light Leak Overlay to Your Video?

The light leak texture gives a retro look to the video and leaves the audience in shock. The user requires a tool that helps them apply light leak transition in the most serene way possible. Allow me to introduce you to Wondershare Filmora, who has come in the market to stay!

Wondershare Filmora is a video editing software that offers an extensive library of titles, transitions, effects, and animations. One is free to use amazing videos and create a mark in the world. The tool was specially designed for semi-professional video editors. The "Motion Tracking" feature has revolutionized the world.

With a clean and uncluttered interface and video editing effects, one can count on this software to bring nothing but the best. It also plays a primary role in applying light leak effects to the videos.

There is nothing that Filmora cannot process. It offers the user creation of free light leaks in the most straightforward steps. Therefore, the subsection comprises the steps of creating cinematic light leak overlay using Wondershare Filmora. So, without any further ado, let us begin!

For starters, launch Wondershare Filmora and import the targeted video file. You can also drag the video to the timeline. Arrange the contents of the video as you want. 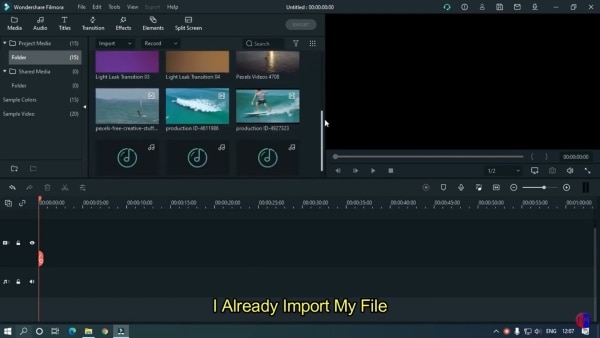 Now, it is time to add a transition. The user can choose any light leak transition from the library and drag it into the timeline. For a better result, it is recommended to place the transition in the center of two videos. 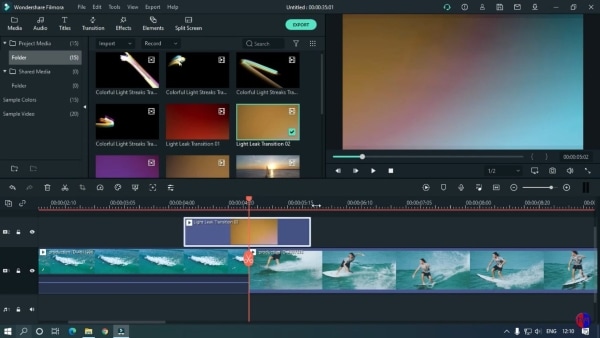 Moving on, double click on the transition and go composting. A menu appears. Tap on "Composting" and switch the "Blending Mode" from Normal to Screen, and hit "Ok." After that, the user is expected to launch "Transition" from the top panel. 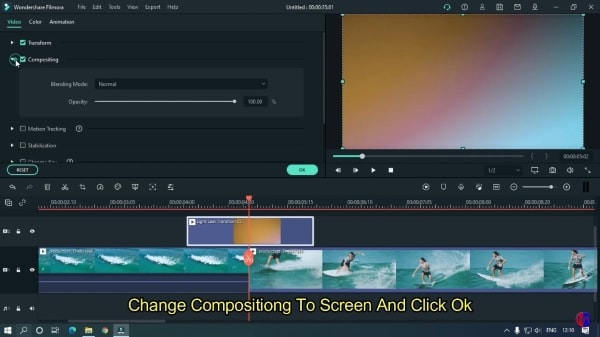 Tap on the "Dissolve" transition and drag it into the timeline in the middle part of the two videos. Change the duration to 5 seconds. Hit "Ok" afterward. Now, add another transition for every frame of the video through the same process. 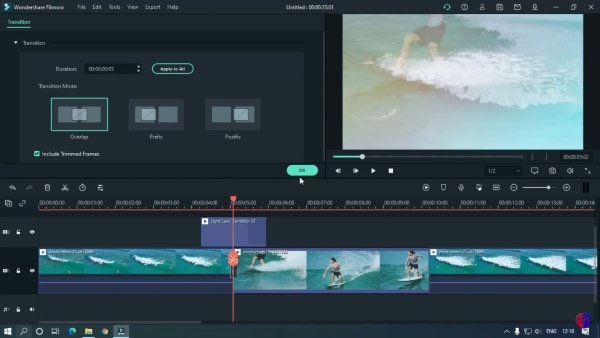 Moving on, it is time to add colorful light streaks transition. Chose any streaks transition and then drag them into the timeline. However, make sure it is dragged into one-third of the frame and not in the center. Add the transition to the rest of the video and change the "Blending Mode" as above. 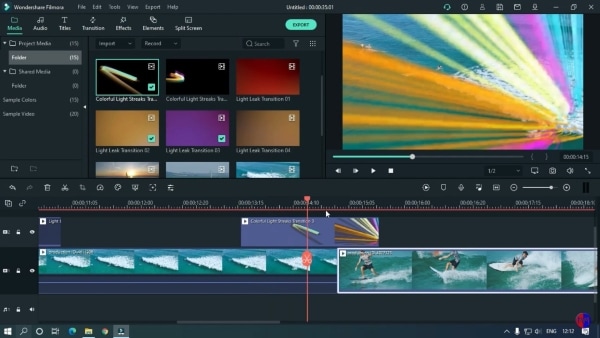 Insert a sound effect to the video from the library if you own one in your system. Drag it to the timeline and adjust its presence in the video. The user can insert another sound effect through the same procedure. 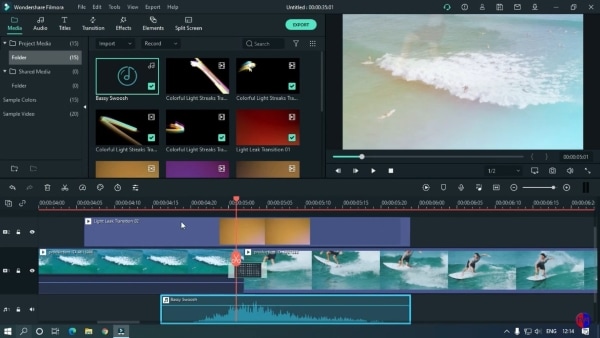 Navigate to the "Transitions" again. Tap on the "Fade" transition and add it to the first and last part of the video. Render the frame for a smooth preview. It would take a couple of seconds. Preview the video and run a test check. 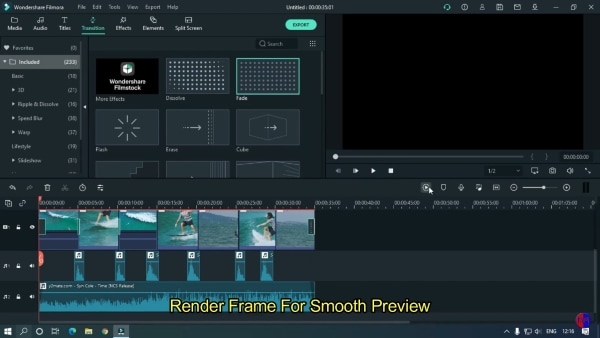 Clin on "Export," which is located on the top right corner of the interface. Name the video and hit "Export." 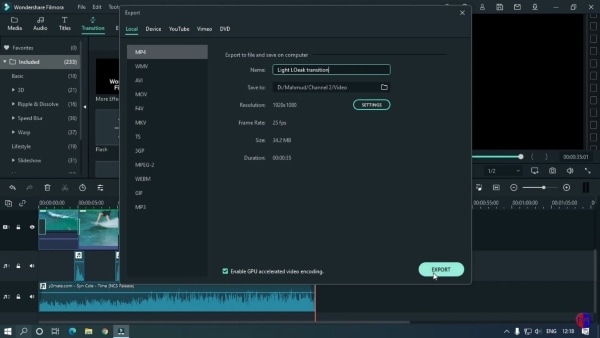 Wondershare Filmstock is your one-stop shop for royalty-free videos and special effects. One can include sound, music, and video effects to the output and give it a whole new impression. It is an impeccable effects store that can be relied upon based on any event and arrangement.

Filmstock offers light leak overlay effects for your videos as well. Some of those effects are explained below:

The Light Leaks Overlay Pack is an incredible filter that promises beautiful and smooth light effects to your video. Be it a professional environment, a vacation tour with friends, or a trip to the farm, this vintage light leak texture has got you all covered. 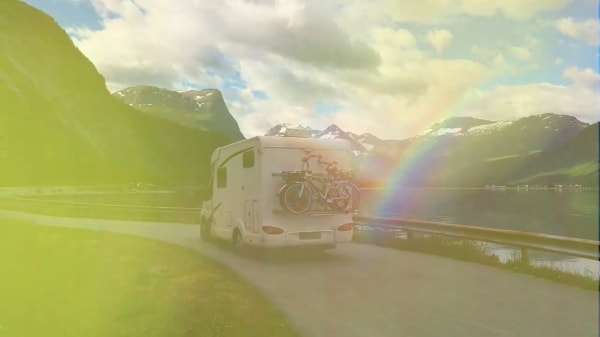 Presenting 20 transitions to the lot, the Light Leaks Transition Pack understands the user's needs. The use of this filter brings value addition to your video and gives it a vintage vibe. The effect is compatible with Wondershare Filmora 9.6 or above. 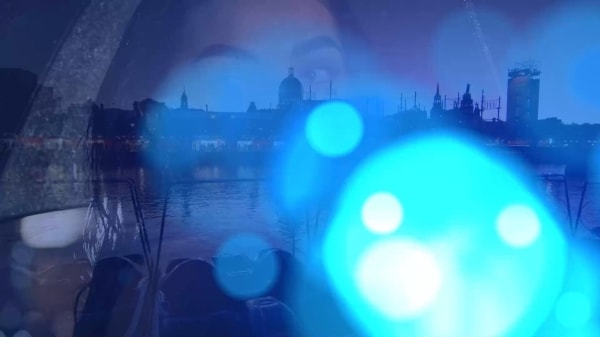 If you love vintage and retro vibes in your video, Film Texture Overlay has to be your first choice. Offering 25 overlays, the filter can be used in your daily Instagram stories, Facebook posts, and YouTube vlogs. 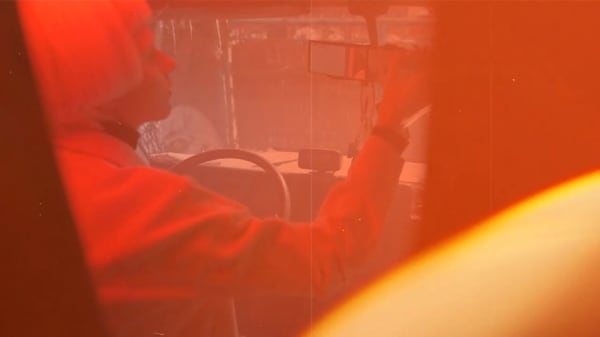 Part 2: How to Create Light Leak Overlay to Your Photos?

Creating a storm and changing the narratives of video and photo editors, Adobe Photoshop has marked their territory. Moreover, this fantastic software helps users edit photographs, compost digital art, do animations and graphic design. Presenting its professional tools, artists use it to bring their imagination to life.

Multiple tools offer the film light leak overlays. It includes RocetStock, Vegasaur, and VFX Footage. Since the market offers an extensive range of light leaks on film, there are free light leaks while you have to pay for others. To know how to use light leak effect overlays in Photoshop, follow our lead.

The first step is to save the light leak overlay at a location that is easily accessed. After that, launch Photoshop and import the target imagery to the interface.

Step 2: Importing the Overlay and Imagery

After that, launch the folder where you have saved the light leak overlay. Drag and drop it to the image immediately. The overlay will appear in a new layer at the right panel of the interface. 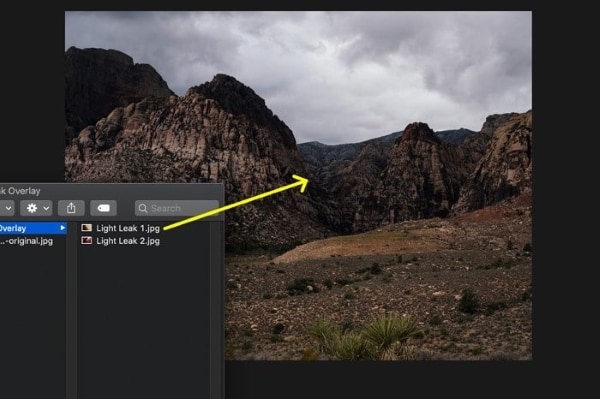 Resize and reposition if needed and double click on the image to confirm. Moving on, change the "Blending Mode" by clicking on the dropdown menu. Choose "Screen" from "Normal" mode. 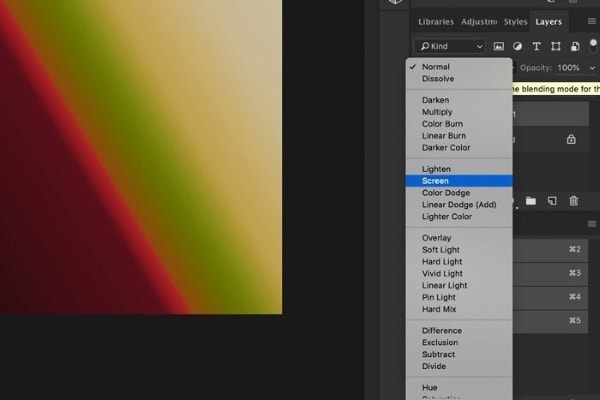 Now pick the layer with the light leak overlay. Navigate to "Image" located on the top panel and hit "Adjustments" from the list of options. Choose "Hue/Saturation" from further menu options that pop up. Drag the Hue slider left or right as required. 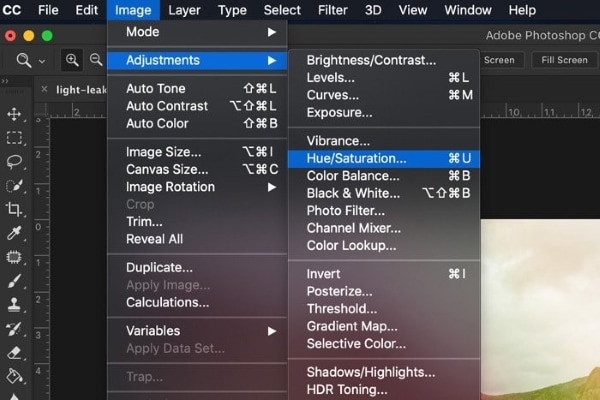 Now save your project as the process is concluded. 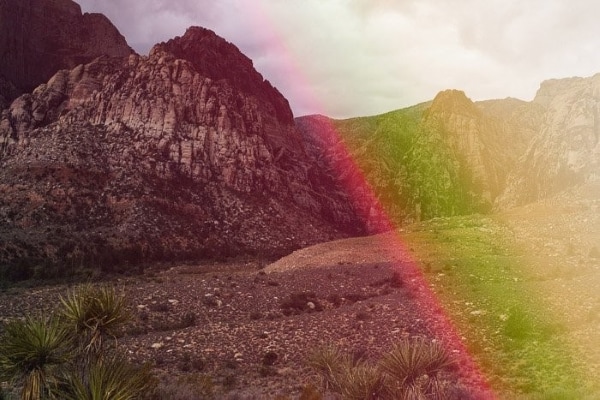 Photographers and videographers are the creative professionals that bring innovation and individuality to every work they produce. Without their work, the world would be a boring place. The addition of light leaks in videos and pictures gives it a retro and vintage look.

The article discussed Wondershare Filmora and how it helps the user create light leak overlay to their videos. The different effects presented by Filmora were also part of this write-up. The users are recommended to give their videos and pictures a new vibe by opting for this photography miracle.