How to Create Datamoshing Effect to Your Footage in After Effects?

Datamoshing effect is consciously added to the footage to give a different outlook. The article shall present the basics of this effect and how to create one without and without plugins.

Experimenting with new effects and filters has become part and parcel of life, especially for creative professionals. Datamoshing is a similar effect that displays errors and flaws in the video clips to leave an impression on the audience. In most terms, the datamoshing effect shares similarities with the glitch effect.

Henceforth, the write-up shall focus on the introduction of this effect along with its workability. The procedure to create datamosh After Effects would also be covered. So, let us begin!

Part 1: What is the Datamoshing Effect?

In this effect, the pixels glitch and appear to melt, duplicate, and create a projection organically. Also known as databending, it is a complicated technique in which movement of one layer is introduced to another layer of the video clip.

Lossy compression and removed frames help develop a psychedelic result effortlessly. Presently, datamosh After Effects has gained popularity as it helps bring change to the video and engages the audience.

Part 2: How Does Datamoshing Effect Work?

The sub-section informs the content creators and creative professionals regarding the workability of the datamoshing effect in video clips. Hence, let us commence this.

Datamoshing eliminates the new picture frame and keeps those frames that control the movement of the pixels. It leads to the picture pixels going into different directions instead of the usual one, thus, creating a glitch effect. These glitch effects are used in unique mediums to create a classy yet ancient vibe.

The datamoshing effect can be noticed between the cuts and motion. It is the process of corrupting the imagery in which the I-frames are replaced and P-frames are applied in the wrong picture. Let us dive right into two types of datamoshing.

The first type of datamoshing is created when the I-frame of the video is removed. In this scenario, the pixels from the previous scene are projected into the next scene smoothly. It gives the impression that the pixels have been tracked into the next shot.

The second kind of datamoshing, known to humankind, is when the d-frame of the video is duplicated. It leads the footage to show images and colors being bloomed together as the pixels are equivalent, coming through the same motion path.

Part 3: Step by Step to Create Datamoshing Effect in After Effects (Without Plugin)

Understanding the datamosh After Effects is one thing, and incorporating it in your footage is another. The section shall walk you through the step-by-step guide to create the After Effects' datamoshing effect without a plugin. So, let's go, shall we?

The first step is easy. Open After Effects from your system. Import the targeted video that needs the datamosh effect. After that, head to the "Content-Aware Fill" to begin the process. 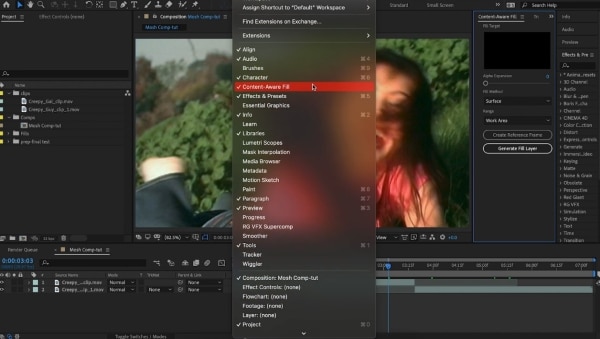 Use the playhead where you wish to create the effect, and then click on "Create Reference Frame." The picture frame opens in Photoshop, and the user is expected to save it. Now, go back to the After Effects. 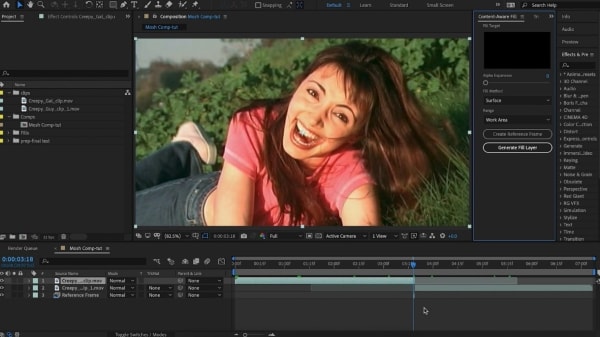 Now, hide the top layer so that the smearing can occur. Turn the Masks to "None" so that you can perform the masking. Split the second layer to duplicate the layer as we make changes to it. Set the "Masks" to "Subtract and then add a refine soft matte. 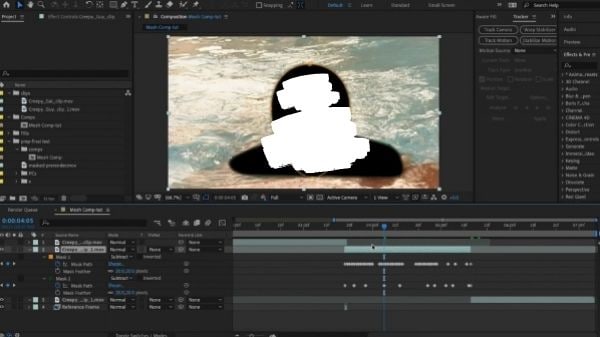 It is important to pre-compose the clip, so right-click on the timeline and hit "Pre-compose" to the menu list that appears. Tick mark "Move all attributes into the new composition" and rename the clip afterward. Hit "OK." 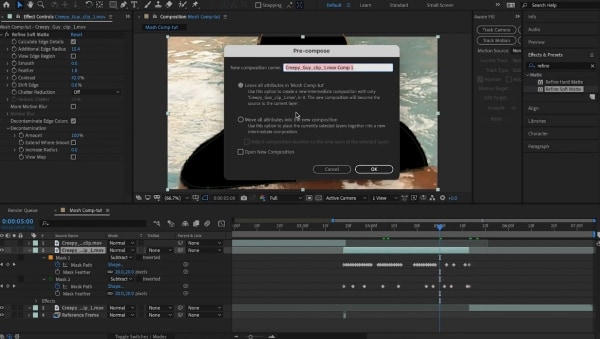 Double-click on the timeline, hold shift and drag it until the clip snaps. Press "B" on your keyboard and "N" on the other side to snap the work area. Navigate to "File" and "Export" and then click on "Render Queue." 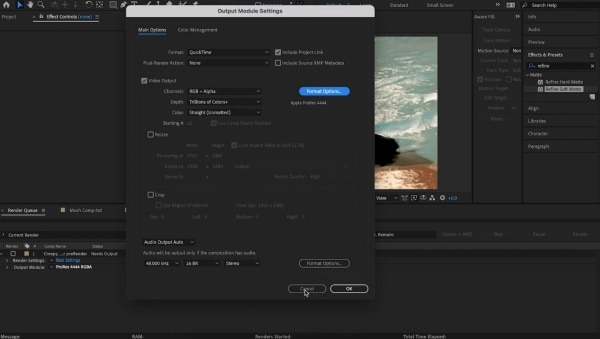 Import the file when it is done rendering and drag it to the timeline. Trim the work area again using B and N buttons from the keyboard. Ensure that the fill method is "Surface," and the range is "Work Area." Click on "Generate Fill Layer" to start the analyzing process. 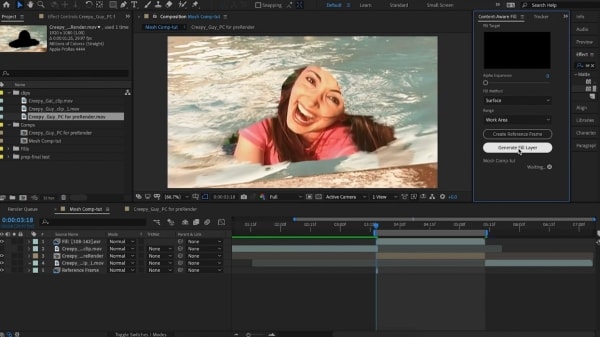 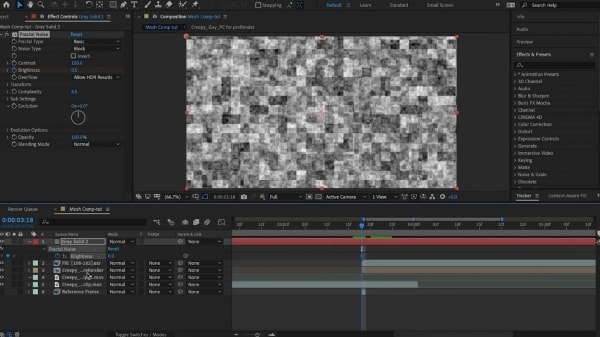 To give the glitchy effect, head to the "Effects and Presets" and hit "Posterize," and reduce its level to a couple of integers. Pull the transition down to the fill layer and set it to "Luma Matte." It will showcase the halo sign that we masked around the image. 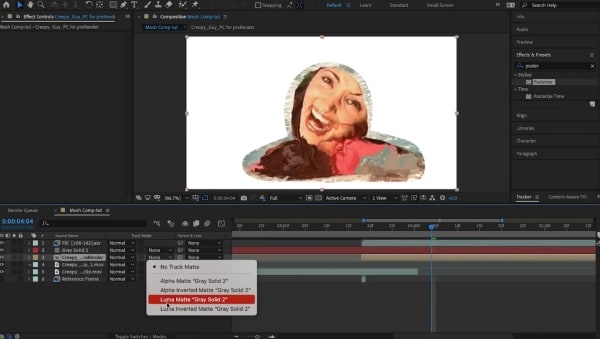 Step 9: Have a Finer Imprint

To eliminate it, use the "Set Matte" channel and alter its layer to the one we pre-composed. Now, invert the matte. Moving on, navigate to the "Simple Choker" and reduce it to one pixel. For perfection, duplicate it and get a finer imprint. 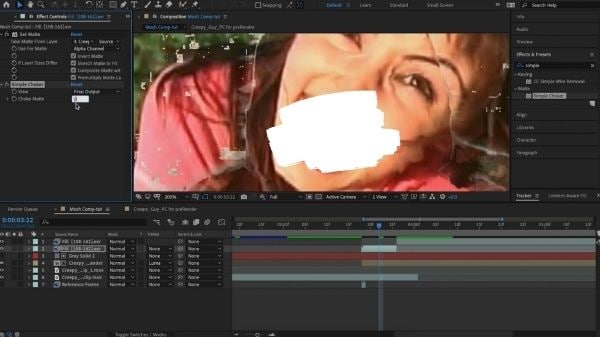 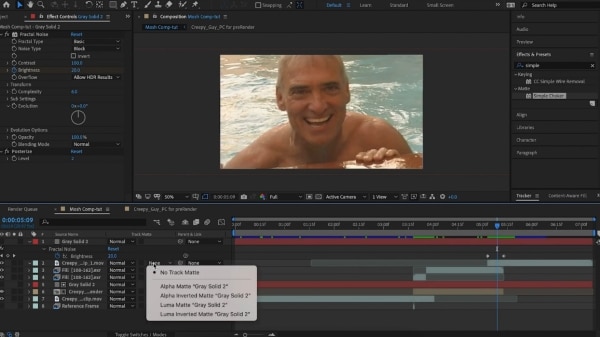 Part 4: How to Do Datamoshing Effect with Datamosh Plugin in After Effects

With its plugin, this sub-section revolves around creating the datamosh effect in After Effects. So, let us begin!

Open After Effects and click on the (+) sign to set the in and out points. Click on the "Datamosh" to render the work area. The timeline will showcase the clip. Click on "Remove Frames" from the left panel and add a new mosh marker by pressing the (+) button beside "Remove Frames." 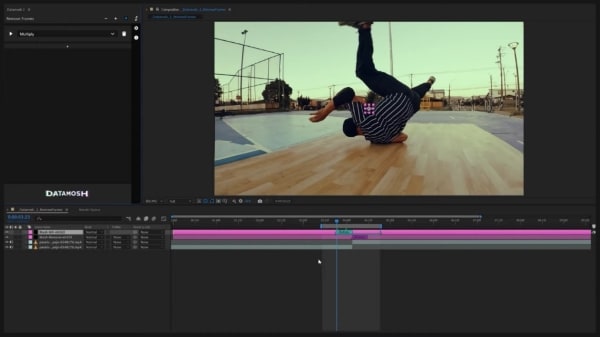 The new remove frame marker will be on the timeline. Drag it to the new scene and then hit "Datamosh." The I-frame removal effect can be shown on the screen. Again, click on (+) to add a new mosh module. Press "Multiply" and then "Average" from the menus that appear. Hit "Average previous 3" afterward. 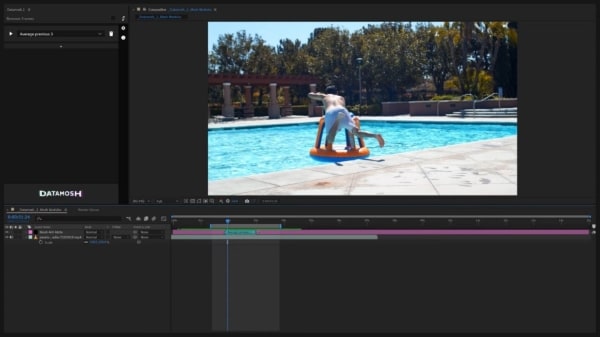 Set the in and out points of this mosh marker and again hit "Datamosh." The work area will be rendered. Now, open the mosh module and toggle on the "Hold Frames" feature. Also, toggle on the previous render. Press the "Datamosh" again. 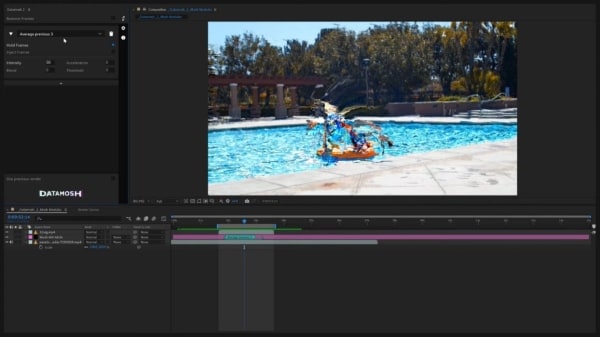 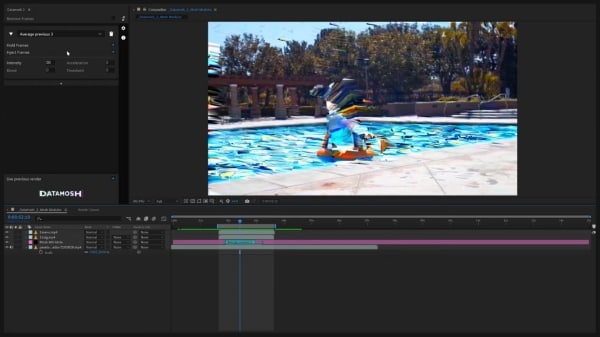 Step 5: Playing with the Acceleration 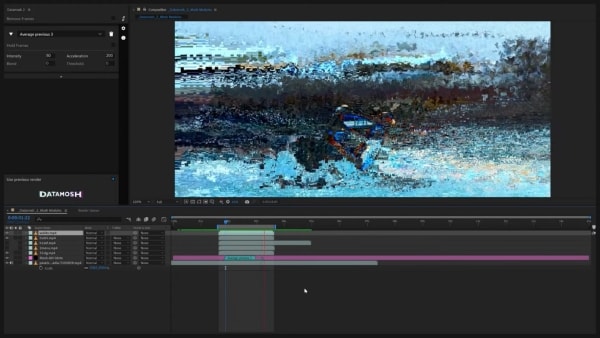 Moving on to the threshold feature, this function is a gatekeeper and decides if a pixel will be moshed. Inverse the intensity of the clip, change the blend to be 0, and set the threshold to be a small integer to find out the impact first. It can be enhanced later on. Uncheck the previous render if you are using the new clip for threshold. Hit "Datamosh" again. Now, export the video, and you are done with the datamoshing. 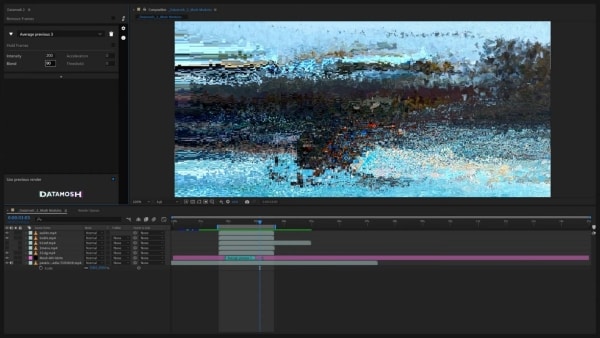 YouTubers and content creators use the Datamoshing effect to offer magic to the workplace. The article offered an extensive guide to effortlessly adding this effect in After Effects. The foundation and workability of the datamosh effect were also the cruces of the article. It is recommended that the user properly know the software before getting into the process.