Download on the App Store
Get it on Google Play
Download
Download
Call us: +1-60-4343-8521
Mon-Fri 6:00 PM to 11:00 AM Pacific Time
International phone rates may be charged by your service provider
Filmora Video Editor
Best Video Editing Software for Beginners to Change Video Speed
Try It Free Try It Free

The amount of video content uploaded to the Internet each day is staggering, as people around the globe create hundreds of hours of videos daily. As a result, the videos you upload to social media must stand out in this sea of content to get thousands of views, shares, or likes.

Speeding up or slowing down the footage is a simple and yet effective video editing technique that can make the content you share online more entertaining to watch. Read on if you would like to find out more about slow and fast motion video apps for iOS and Android devices you can use to process your footage before posting it on your social media accounts.

Sharing the raw footage, you capture on a Smartphone with your friends and followers may not always produce the results you’re hoping for. Slowing down the playback speed can make a scene more entertaining or highlight an important moment in your video. Increasing a video’s playback speed is a great option if you want to create breathtaking time-lapses. So, let’s take a look at the 10 best video speed-changing apps for slow and fast motion video editing on iOS and Android devices.

Changing the playback speed of the footage you edit with FilmoraGO takes just a few moments since this cross-platform app enables all of its users to choose how rapidly the frames in each shot will be displayed on the screen.

This app provides a versatile set of video editing tools, enabling you to enhance the colors in your videos, make a soundtrack or even create a PIP effect. The only downside is that the free version of the app watermarks all videos you export from it, and you must make an in-app purchase in order to remove the watermark from your videos.

As its name suggests, this video editing app provides YouTubers and Vloggers with all the tools they need to create the content they share with their followers. As soon as you record a new video clip with your iPhone or Android phone, you can import it into the app and remove all parts you don’t want to include in the final cut.

Altering the speed of a video clip is easy since you have to decide if you want to speed up or slow down a video and then insert a new playback speed value. Vlogit will display the changes instantly so that you can preview your footage before sharing it on Instagram, Twitter, Facebook, and other social networks.

Video content creators in need of a cross-platform app that enables them to edit the footage they captured with the Smartphones or GoPro cameras should consider installing Quick on their devices. The app offers 26 fully customizable themes, and it enables its users to combine photos and videos.

Creating a slow-motion or fast-forward video with Quik is a straightforward process that can be completed in just a few taps. You can export all of your projects from Quick in Full HD resolution, but the app currently doesn’t support 4K footage. If you decide to add music to your videos, the app will automatically sync the transitions to the beat. 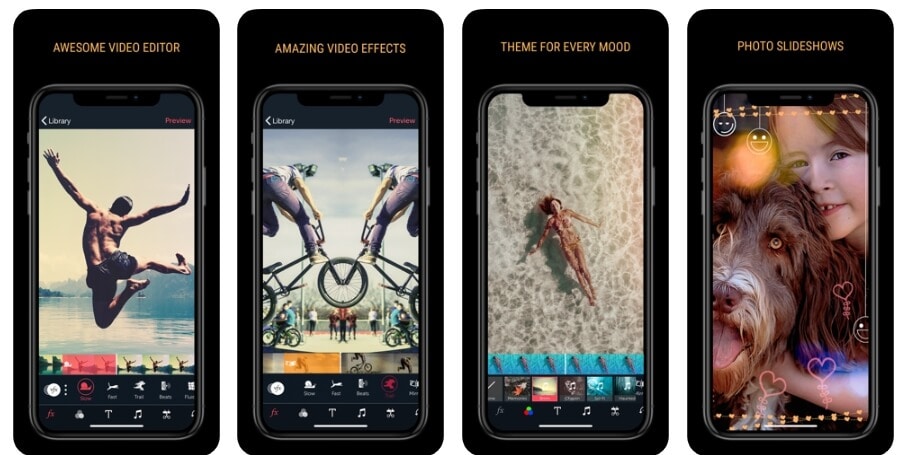 If you are looking for an app you can use to record and edit HD videos, then Vizmato is probably one of the best options you have at your disposal. The app is also equipped with all the tools you will need to slow down or speed up a video.

After you import the footage into Vizmato you just have to specify the portion of a video clip, and then tap on the Slow or Fast option or choose if you want to play a video in reverse. The app will change the clip’s playback speed, so you just have to preview the results before exporting it to a social network of your choosing.

Supported OS: Android 4.1 and up 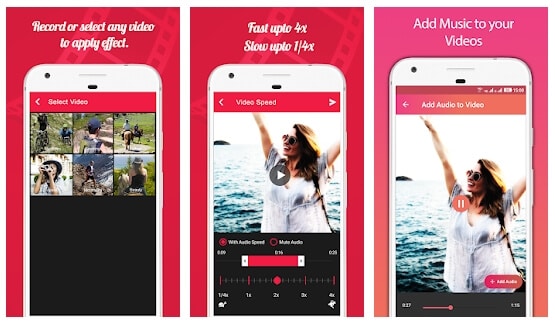 With this app, you don’t need any video editing experience to create slow or fast motion videos. Import the footage you recorded with your Android phone and choose one of the preset video playback options. The app lets you increase or decrease a video clip’s speed up to four times, so you have to select the portion of a video you’d like to speed up or slow down and export it to your phone’s gallery.

Optionally, you can add music to each video you edit with this app, but you won’t be able to perform color corrections or apply visual effects to the footage you process with this app. 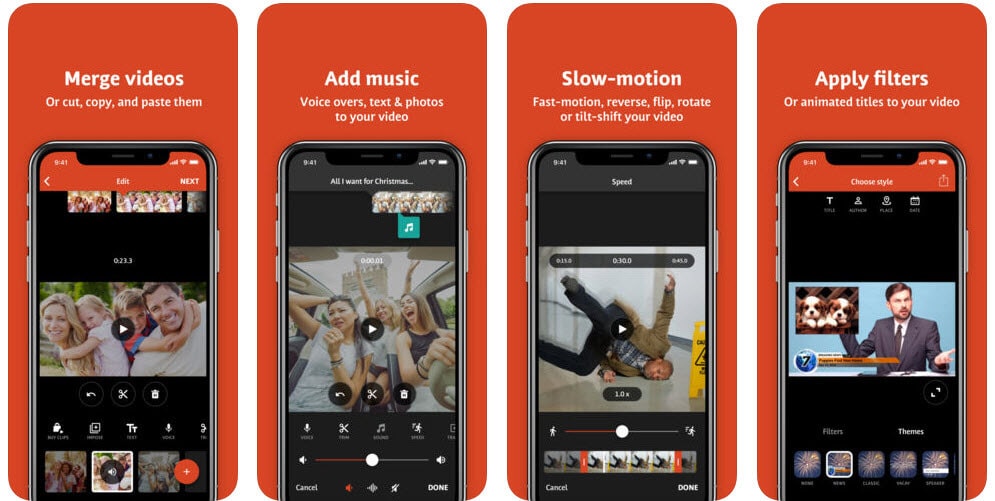 Increasing or decreasing a video’s playback speed takes only a few minutes, enabling you to post fast or slow-motion videos on your social media accounts just a few moments after you recorded them. In addition, you can use Videoshop to reverse your videos, but you should keep in mind that the app can crash easily if you are trying to perform a demanding video editing task.

iPhone, iPad, and iPod touch owners can use this app to control the playback speed of all videos they record with their devices. The app’s timeline is designed to help you set points at specific segments of the video, enabling you to speed up or slow down only a portion of the video clip without cutting it.

The Slow Fast Slow app also offers the tools you will need to control the audio pitch of the videos you process and avoid any sound distortions that can occur as the result of altering a video’s playback speed.

KineMaster is one of the best video editing apps for iOS and Android devices you can find on the market. That’s why it is hardly surprising that the app offers powerful tools that enable its users to create slow-motion videos and time-lapses.

In addition, KineMaster is equipped with EQ presets and audio editing tools you’re going to need to fix the original audio of the video clips you speed up or slow down. You can use this cross-platform app to edit, and export videos in 4K resolution, but all videos you process with the free version of KineMaster will be watermarked. 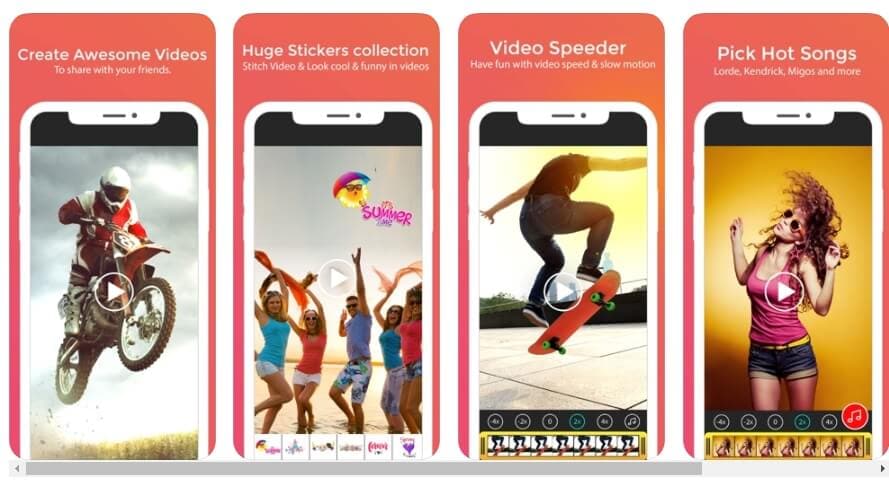 Changing a video clip’s playback speed with this app is a simple three-step process. After you import a video clip into the app, you will be taken to the Adjust Speed screen, where you can choose if you want to alter the playback speed of an entire video clip or speed up or slow down a particular segment of a video.

Afterward, you have to drag the Video Speed slider to the left or to the right and the app will automatically adjust the speed of your video. When done, you can import an audio file from your phone and proceed to export the file to the camera roll or upload it to YouTube or Instagram.

If you are not happy with the results, you can tap on the Reset button, and iMovie will return the playback speed of your video clip to its normal value.

Still can’t decide which video editing app to use for changing video speed? I’ve made a comparison table, hoping that can help you decide.

Changing a video’s playback speed is a routine video editing action that can make any video more visually dynamic if used correctly. Any of the slow and fast motion video editing apps we included in this article can be used to create stunning slow-motion videos and time-lapses. Which of these apps will you use to speed up or slow down the videos you record with your iOS and Android devices? Leave a comment and let us know.

Thank you for your comment. We will review it within few days.
You May Also Like
Top 10 Video Players for Slow Motion

The following are the top 10 media players with the slow motion feature to give an astonishing experience to you while you are viewing your most loved video.

Read on, if you are looking for a camera that can help you capture mind-boggling slow-motion videos because in this article we are going to take you through the best slow-motion cameras in 2020 that f

In this article, we are going to share with you everything you need to know about proxy video editing and show you how you can edit these proxy files to make videos in Filmora9.