Final Cut Pro VS Adobe Premiere 2022: Which Suits You Better?

The continuous battle between the Final Cut Pro vs Adobe Premiere to grab the top spot is quite evident since the beginning of both the macOS programs. Whether it is post-production meetup or heated bar debates, both Premiere Pro vs Final Cut has been a matter of discussion and confusion for the expert and pro users.

The Adobe Premiere Pro vs Final Cut Pro is always in the rat race, fighting to achieve the number one position and rule the heart of their users and subscribers. It is because Premier and Final Cut are the only two video editing software for the macOS. Premiere is available for Windows as well. Which one do you think is the best for Apple devices, or which one would you like to use for editing? Let’s dive deeper into learning more about both the tools.

Both Final Cut vs Premiere are popular choices among the users and in the market. How to decide which one is better? Here are some of the main differences between the two software.

It suffers choppy and slow performance when users need to work on high resolution platforms like 4K.

This software tool works only on OS X and suffers with few basic compatibility as well as format issues.

This video editing software needs an ongoing subscription of Creative Cloud priced at $20.99 per month annually, or $31.49 per month on a bi-monthly basis. You may choose to pay a full year subscription paid upfront at $239.88 that stands at $19.99 per month. The comprehensive Creative Cloud suite is priced at $52.99 per month. It includes Photoshop, Audition, Illustrator, and a raft of other Adobe creative software. When you subscribe to this plan, you get program updates delivered semi-annually by Adobe, and 100GB of cloud storage for syncing media. 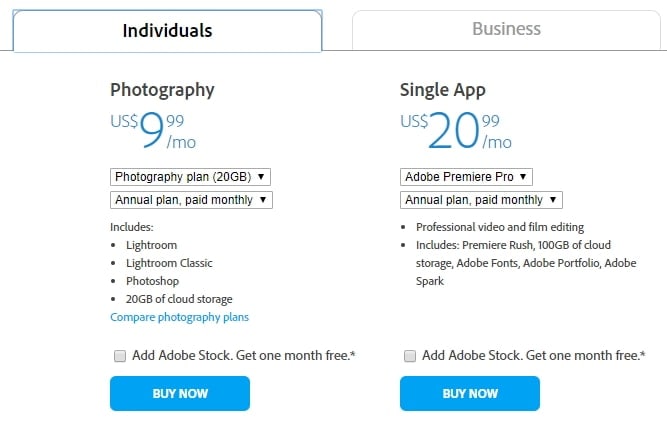 Pro has a one-time price of $299.99. It is a better deal than Premiere, as you pay much lesser than Adobe and also gets feature updates at the same price. Get your Pro tool from the Mac App Store for handling updates and installing the program on multiple computers when you are signed into the same store account.

Generally speaking, the buying patterns of these two differ greatly. Some people enjoy once-for-all payment and others love to subscribe so that they can stop paying whenever they like. Anyway, both are not cheap enough for you to buy them without thought.

Maybe it's time to find an affordable yet powerful editing tool to help beginners and pros. Why not give Filmora a try? 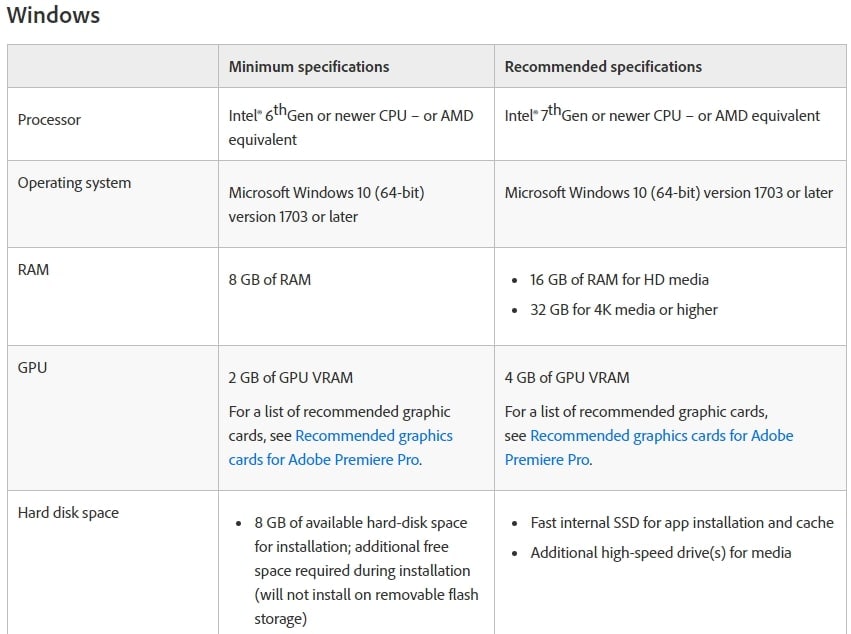 Adobe Premiere is a highly professional software supporting 43 video, image, and audio formats. It is an efficient tool for handling any level of professional media, and the computers have the codec installed for media. It even consists of Apple ProRes. Premiere supports native (raw) camera formats too. It includes ARRI, Panasonic, Canon, Sony, and RED. There is rarely any video content that you create or import and cannot be supported by Premiere. There's not much video you can create or import that Premiere can't support. It even supports XML exported from Final Cut.

This software has a flexible and traditional timeline. It is a Non-Linear editor with tracks heads and tracks. Your content on the timeline is called the Sequence and comes with Subclips, Subsequences, and Nested Sequences for structural help. You can also find tabs with the timeline for various sequences. It is specifically vital for nested sequences. The trackless magnetic timeline of Final Cut Pro is unlikely and uncomfortable in comparison to the long-time video editors in Adobe. Premiere has a configurable UI and comes with seven pre-configured workspaces. 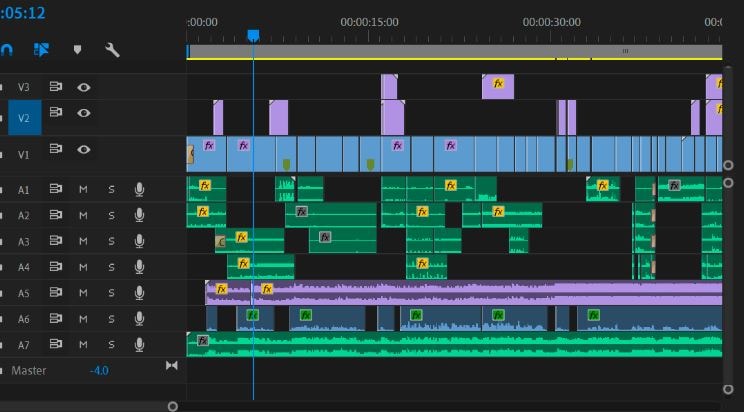 The users either love or hate the Magnetic Timeline in Final Cut Pro. It is like a storyline that lets you connect the scenes in a video or some parts of the video seamlessly. It automatically deletes any wrongly done overwriting on a clip or anything that interferes with the timeline. There are only three pre-built workspaces in Final Cut Pro. It offers several editing advantages like connected clips tool that lets you to cycle various video clips. You may use three versions of a clip to check the right way it fits in the video content. It helps in saving your time.

For the timeline tracks, Premiere offers Audio Mixer with features like volume unit (VU) meters, pan balancing, mute/solo, clipping indicators, etc. According to the project, you may adjust your requirements. Automatically create new tracks by dropping an audio clip in the timeline and specify types like stereo, mono, standard, 5.1 or adaptive. The audio meters are re-sizable and allows you to single out any track. Adobe Premiere supports third-party VSP plugins and hardware controllers. Choose Adobe Audition to use advanced techniques like Noise Reduction, Studio Reverb, Parametric EQ, Compression, auto click removal, etc.

The strength of Final Cut Pro is Audio Editing. From peaks, noises, and hummus, Final Cut Pro can automatically adjust the flaws, or you may also adjust them manually. From several plugin supports to over 1,300 royalty-free sound effects, and the ability to match the recorded tracks, you can find a comprehensive audio segment with Final Cut Pro. For powerful sound, you have Apple Logic Pro plug-ins and a surround-sound mixer for locating or animating 5.1 audio, and a 10-band or 31-band equalizer.

The Adobe Premiere comes with one of the best color grading and correction options. Not just when you think of Adobe Premiere Pro vs Final Cut Pro, even when you compare any other tools, Adobe Premiere is the best software that you can have. Give life to your raw files by using the right colors to express emotion in a particular clip or enhance the overall color tone of your videos easily with Premiere.

If you compare it with Adobe Premiere, the Final Cut Pro lags. External plugins like Color Finale is used to enhance color tones in Final Cut Pro. For small marketing or interview videos, the available color options work fine. But for long videos where you need to show emotions or individual moments of life, paying for the external plugins become important.

Adobe Premiere is a complex software and not an intuitive one, compared to Final Cut Pro. It is targeted to the experienced video editors but has a logical structure for all users. You can find files easily as the layers are separated. Once you understand the menus and controls, it becomes easy access. Here are 15 tutorials for Premiere Pro.

With the most intuitive interface, Final Cut Pro is an easy to understand software even for the amateurs. You can naturally learn the workflow with tips. For editing, there is a logical progression, and you will not find the progression exhausting. It is very natural, and you won’t feel like you are wading through several tools for perfection in your videos. This software is fun, easy, and highly accessible and never damage the quality.

Why do users need to select Adobe Premiere

This software tool consists of all professional video editing tools and possesses better integration with other useful programs so that users can have all facilities on one platform. The professional filmmakers have observed that Adobe Premiere is suitable for editing of short videos and it serves with fast switching service between different after-effects. But the problem occurs with large project handling needs as this software tool somewhere lacks in the organization.

You will be glad to know that Premiere is a specially designed multi-workstation type program that works perfectly on Windows and Mac. There are various dockable tabs available on the adobe platform that helps to run it in a faster manner. For the basic editing needs of users, Adobe makes use of track-based advanced timeline structure that can have separate tracks for videos and audios over the timeline. For easy to manage project files and their handling needs, premiere follows the procedure of creation of single self-contained type data files for individual projects.

Why Final Cut Pro is an effective choice

There is no doubt to say that Final Cut Pro has influenced the market within the last few years due to its advanced features and abilities. Being a real competitor for Adobe Premiere, the Final Cut Pro serves with the most interesting feature in which Adobe Premiere lacks and that is speed. Final Cut Pro is actually a faster as well as smoother tool for all your video editing needs and it makes use of well-designed databases for tracking important information on time. It is possible to make use of smart collections, keywords, and ratings for easy organization of all media files as well as metadata.

One major difference between Adobe Premiere and Final cut Pro is that the latter supports the advanced structure with division into two parts named as Projects for edited ones and events for sources. In order to exchange data with some external applications from Final Cut Pro platform, we need to make use of FCPXML. This software tool further extends support towards AAF, OMF, EDL and XML, etc. and you can also access its tutorials online for an easy understanding of terms.

Before choosing the tool between Final Cut vs Premiere, always list down your requirements, pay close attention to the workflow that matches your needs, and your experience of using the tool. It will help you to make the right decision. Although both the software is just great, you need to understand the situation and choose one that best suits your requirements.

For most of us with other requirements, after all, we are not filmmakers, may want to see some more user-friendly software like iMovie, Lumafasion(for Ipad users especially), or a cheaper yet powerful tool, Filmora. Click and have a try!

Thank you for your comment. We will review it within few days.
You May Also Like
How to Use Motion Tracking in Adobe Premiere Pro Easily

Ultimate Guide on How to Mask in Adobe Premiere Pro

Do you want to know how to mask videos in Premiere Pro? In this article, you will learn how to use masking tools easily. Have a look!

Do you want to find free luts for Premiere Pro? In this article, we will let you know 75 free to use cinematic lut for Premiere. Check it out!