How to Easily Use Audio Track Mixer in Premiere Pro

If you are the type of person who loves mixing audio, then you’ll need to use this little-known function in Adobe Premiere Pro. While you might know about the Audio Clip Mixer, which lets you take on the audio between clips, the Audio Track Mixer allows you to control a whole track, which can be beneficial in its own way. Sometimes you need to make big sweeping changes that affect everything, and no one wants to change their all sounds clip by clip, which is where the track mixer comes in handy.

So how do you use the audio track mixer to manage your audio inside of a video? Well keep reading and we’ll show you!

Part 1: How Does the Audio Track Mixer Work

Mixing tracks is when audio is blended and mixed together in a sequence, and you have multiple sounds over one channel. For instance, when you watch a TV show and have music cut over two characters talking, that’s an example of mixed tracks. You can mix music, dialogue, sound effects, voiceovers, and other things to create a seamless finished product. You can even have different types of audio, or have different tracks play in different earphones of the headset if you want to. 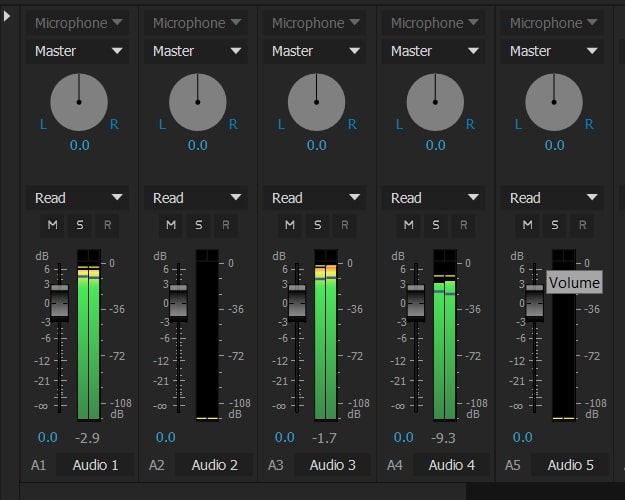 With audio track mixer, you can see each track being played in real time, not just on the timeline but also on its own screen. Then you can do a few things to each track such as:

You can even look at meters while the main window is closed, which is helpful if you need to free up some space or organize your sounds while other data is shown.

You can see the sequence in real time as it is being played, see the peaks and valleys of the sound, and ensure that you can control the volume for every track. You’ll have total control over the sound, and the playback.

Part 2: How to Change the Audio Track Mixer Settings

If you are the type of person that likes to work with the sound as it happens, then you can. Recording and mixing on the fly is easy if you can avoid some mistakes.

Using mono tracks allows you to alter the sound for left and right settings, while stereo tracks produce two different signals for two different speakers. So, if you want to control where the sounds are coming from, then you can do so with a simple adjustment. 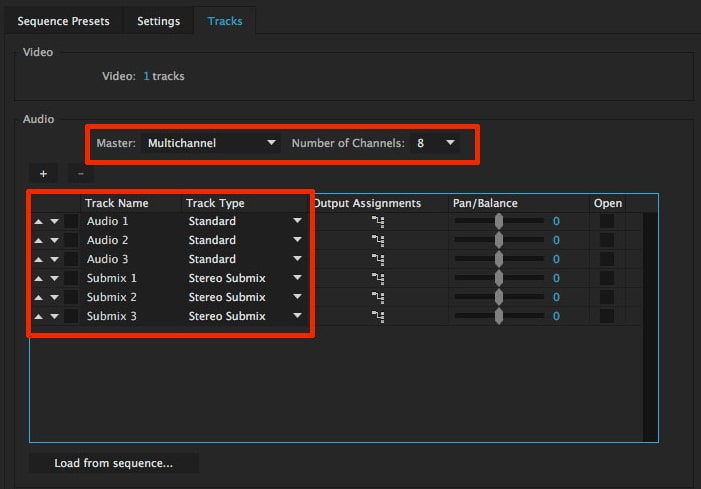 The audio files are edited both in the audio interface and in a timeline, where it is either imported or directly recorded. Then their waveforms can be viewed, the volume and sounds can be adjusted, and larger audio mixes can be divided into sub-mixes.

All your changes will happen on the timeline, and you’ll be able to listen to the new track instantly.

Part 3: Using Audio Track Mixer for Your next Project

If you are an aspiring filmmaker, working on a project, or just putting some clips and music together for fun, you need to use Audio Track Mixer to gain control over your sounds. Dealing with tracks, especially when you have several of them running on top of one another, can be a frustrating process of clicking and straining your ears to ensure that everything is just perfect.

Instead of wasting hours staring at the computer screen, using the Audio Track Mixer in Premiere Pro is a great way to cut down on the micromanagement and instead focus on what’s really important - getting a good quality sound out of your video and audio.

Use the track mixer to manage and customize your sounds, see the volume and base of each individual track in real time, and set when tracks come in and fade out. Using the mixer will allow you to have picture perfect sound quality, every single time.

If you want to edit audio in an easier way, here we recommend using Filmora. It is a video editor designed for people who want to enter a higher level of video editing. You can use FilmoraPro to do automatic audio sync. Equalize the highs and lows of your audio to normalize the volume of your clips and Reduce unwanted background sounds, like crowds or wind with this feature. It is a powerful audio editor for you. Download it now to have a try!

Thank you for your comment. We will review it within few days.
You May Also Like
How to Create Training Videos for Employees on Computer

So, in this article, we are going to take a look at the advantages and disadvantages of each platform in order to help you discover how you can utilize each of these social networks to broaden the aud

How to Shoot IGTV Videos With Smartphone/DLSR Cameras?

In case you were trying to find out how you can shoot IGTV videos with your Smartphone or DSLR camera, you’re at the right place because in this article we are going to show you how to create videos t