How to Use Color Correction in Premiere Pro and FilmoraPro

So, you’ve shot an amazing video that is rich in colorful scenes but are not much satisfied with the lighting or color output of the video. Well, in such a case you can use Premiere Pro to achieve cutting edge color correction.

Not familiar with how to make use of Premiere? Fret not pal! We also have discussed below the step by step tutorial on how to perform color correction on Premiere Pro.

Part 1: The Difference between Color Correction and Color Grading

Before we get hands on experience of both Premiere Pro and FilmoraPro, it is vital to understand the key difference between color correction and color grading. Often, both terms are confused with each other. So here’s the exact piece of information for your convenience.

Color Correction is nothing but the process of customizing the exposure, shadows and contrast to redefine the overall look of the scene /image to give it a real like look. This balancing of light plays a huge role in setting the right look of the image/scene to make it more appealing and real life like.

Ideally, Color Grading is carried out after color correction is done. It is performed to alter the visual tone of a scene/image. For instance, the green tint obtained in the movie “The Matrix” is a result of color grading. Not just in “The Matrix”, there are several other blockbuster movies in Hollywood that make use of an orange and teal grade. Color grading is more of an artistic skill with technical aptness.

Part 2: How to Correct Color in Premiere Pro 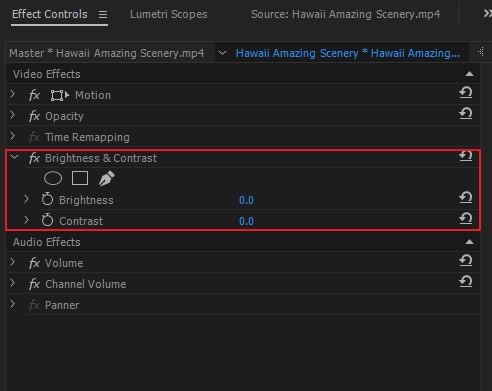 Note: Just in case, you wish to change the orientation of the split view from “Horizontal to Vertical” or vice versa, head to the “Layout” menu and then make due changes in the relative proportions, as per your preference, of the split views. 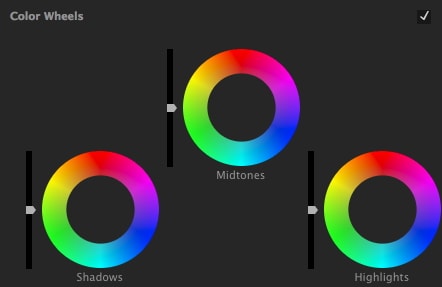 Part 3: How to Use Fast Color Correction in Premiere Pro

Moving on to the “Fast Color Correction in Premiere Pro”, let’s now understand a step by step tutorial on how to make use of it to set the white balance. This method is widely recommended over the “Auto Color” effect as it lets you to have more control over the effect. 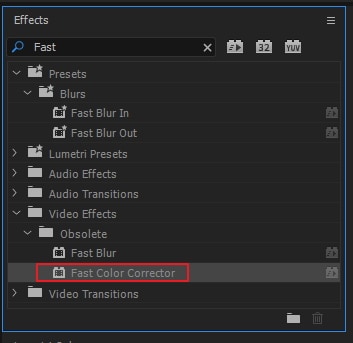 Note: Please bear in mind that if, in case, the white areas over your footage are too blown out, there ain’t going to be much color detail available to utilize the Fast Color Corrector effect. 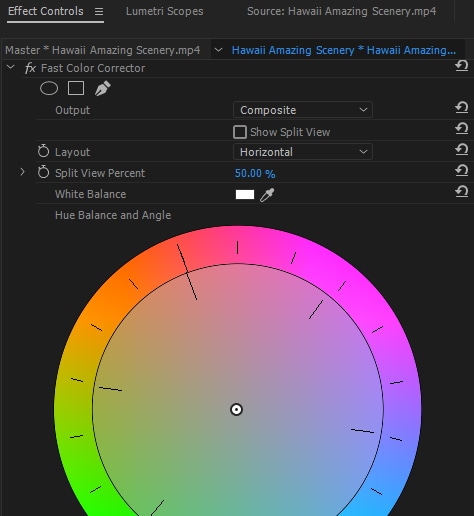 Well, to help you understand the in and outs of the basic color correction in Premiere Pro, carefully read through the entire section discussed below.

Pro Tip: In case you wish to reset any value in the Lumetri Color Panel to its default value, simply double tap on the slider and you’re done.

The very first control which is more like that of Instagram filters is Input LUT. If you’re learning basics or a novice, it isn’t really required to make use of LUTs. Making use of this will add more trouble than be of any help. 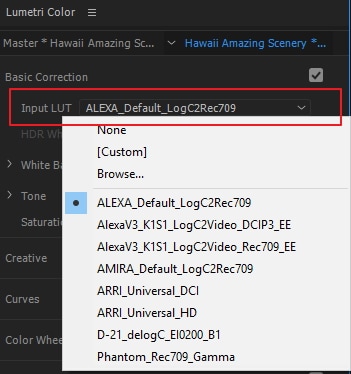 When you make use of the WB selector, you’re enabled to select any point in your footage that is white. Once you do that, Premiere Pro will fetch the appropriate white balance settings from it. 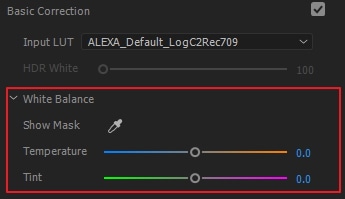 Next, we have tone section that helps you to control various effects like exposure, contrast, highlights, shadows, whites, blacks and HDR Specular. If you’re not well-versed with all the effects, you can always look forward to the “Auto” button available at the bottom right of the “Basic Correction” panel. Thought, this doesn’t always perform an outstanding makeover but yes, it can certainly be of great help if you’re a novice.

With the launch of new Premiere Pro, the “Exposure” and “Whites” sliders were improved much. While on the other hand, to all the other sliders, there are some minor reductions. 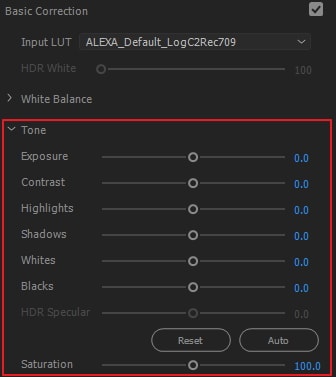 Part 5: How to Use Color Correction in FilmoraPro

FilmoraPro is a video editor that can make color correction a lot easier than Premiere Pro. Likewise Premiere Pro, first thing you need to get started is to set up a workspace for color correction. If you’re a pro you can still manage work easy with the default layout, but for novice users it is recommended to get a optimal layout set up for easy operation of color correction or color grading. Here is the user guide of FilmoraPro that may help you. To get this done, you can simply head to the “View” menu at the top, followed by “Workspaces” and opt for Color. You’re all set to begin now. Simply move along with the instructions mentioned below to achieve color correction in FilmoraPro.

Now, here’s a hypothetical situation where we have a footage that is missing a lot of contrast and the shot’s white balance is way too blue. In such a scenario, you can set the contrast with the help of Auto Contrast feature (steps listed below) or using Curves (discussed in the next point).

Begin with selecting the footage you wish to set contrast of, over the “Timeline” and then proceed to “Controls” section available on the top left. Now, you’ll get to see “Effects” section placed just below the “Transform” properties. Hit the “+” icon besides “Effects”, get down to “Color Correction” and then opt for “Auto Contrast”. You’re done now.

Also, to set the temperature of the footage, follow the instructions below.

Do you know: Changing the order of the effects can also help you to achieve a more color corrected and real life-like colors.

2. Use Curve effect to Correct Color

Next up, we have is to color correct a footage using the Curves effect. Let’s understand how to make use of this effect. 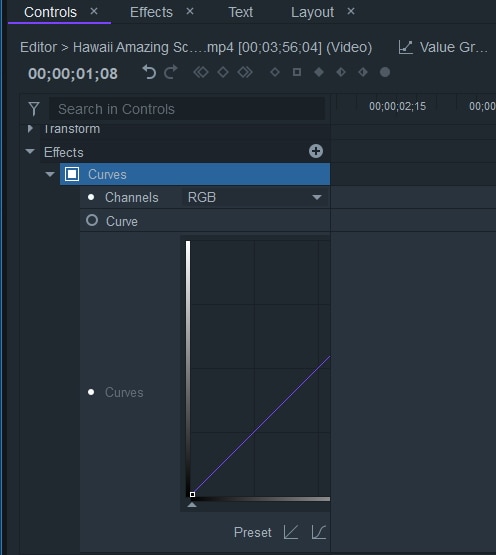 3. Use Scopes in FilmoraPro

The “Curve” effect or the “Auto Contrast” features are a quick and easy way to color correct your footage. But for the professional users, FilmoraPro also has a great method to color correct your footage and that is via the “Scopes”. To utilize this method, you need to look out for the “Scopes” tab on the top right corner and then you’ll get to access several different scopes types. 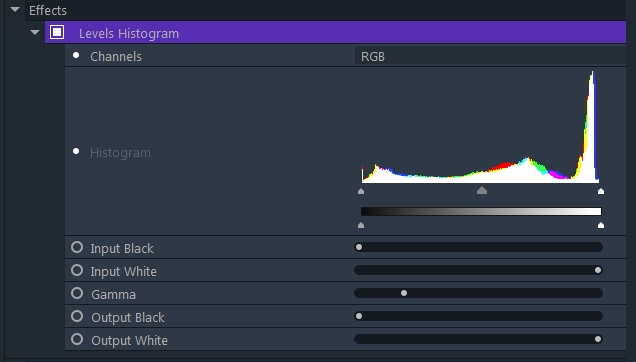 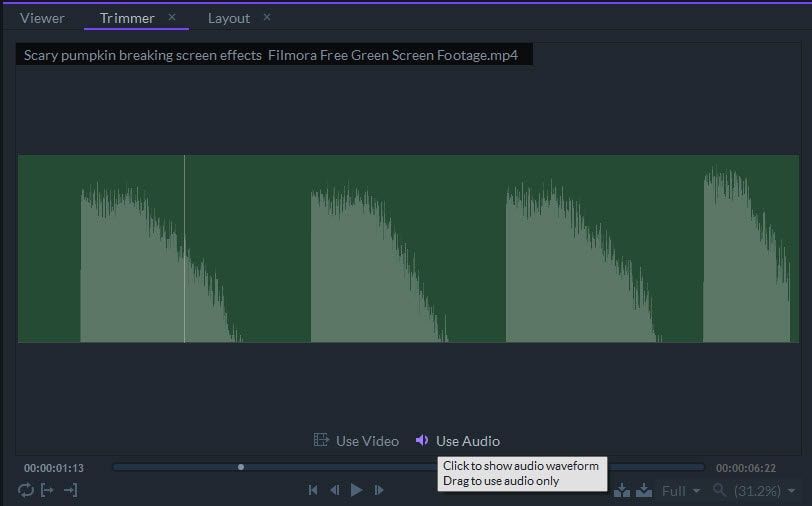 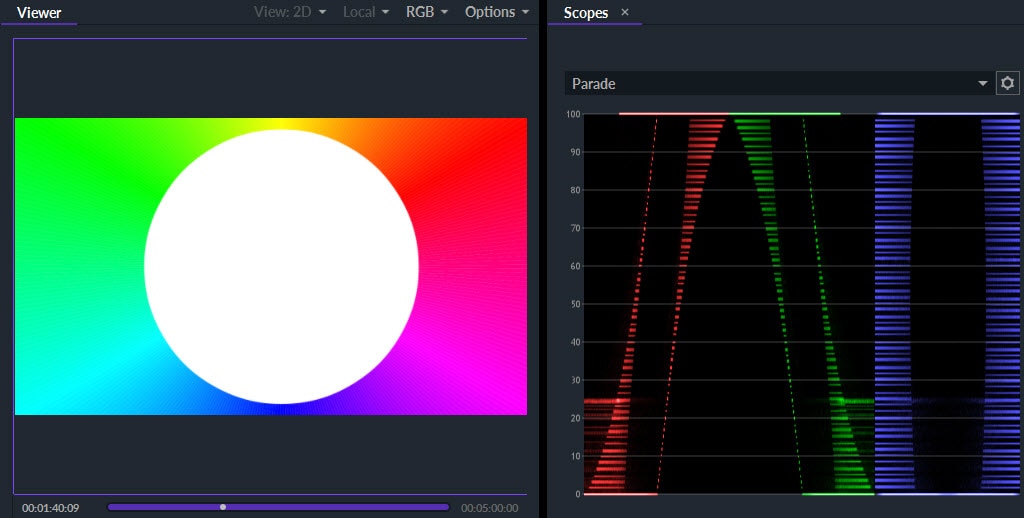 So, that was all about performing color correction in Premiere Pro and Filmora Pro. With such classified information for both the software, it is now pretty evident they both are efficient and productive tools. But on one hand, Premiere Pro requires high technical skills and sound knowledge about the tools. On the other, Filmora Pro is turned out to be a savior as it can be utilized by users of all skill levels, be it a novice or a pro.

The process of rotating a video is rather simple, and you don’t need access to a professional video editing app like Adobe Premiere Pro to perform this task, because there are quite a few online platf

How to Create the Mirror Effect in a Video?

The Mirror effect, featured in almost all video editing apps offers an opportunity to create a comical effect in a video without too much hassle. So, in this article, we are going to show you how you