How to Screen Record on Android 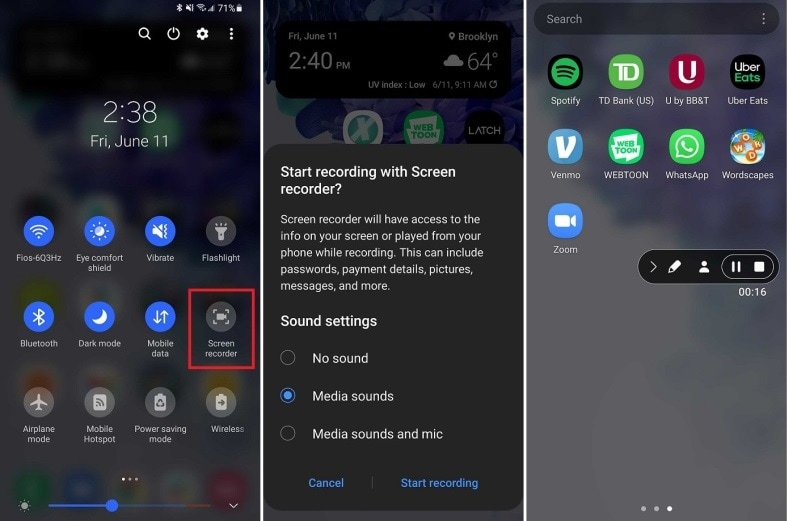 Step 1: Pull down the notification menu from the top.

Step 2: Tap on Screen Recorder icon to turn it on.

Step 4: Tap on Start Recording option to capture your screen activities right away.

Step 5: After a few seconds, you will see a pop-up bar with pause and stop buttons. When you are done, tap on Stop button.

The recorded video will be saved on phone storage for you to access.

AZ Screen Recorder is the best screen recorder for Android. You can download it free on your Android device and record anything screen without rooting your device. It does not come with any recording time limit and watermark on the recorded video. You can record at Full HD(1080p) resolution at a frame rate of 60fps. The app comes with a floating bar for easy access to controls. There is an inbuilt video editor that lets you rotate, crop, trim, merge and compress videos. 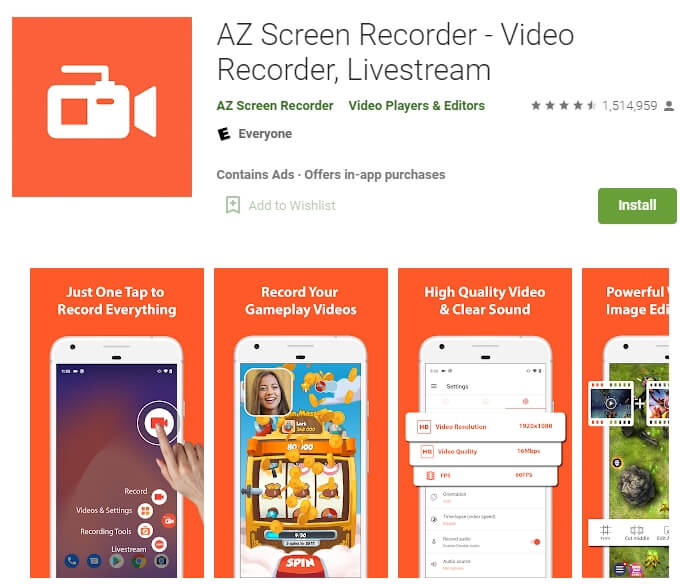 With face cam footage, you can go for recording face cam. It comes with a drawing tool that allows you to annotate the video. You can use the drawing tools while recording the video. You get Android screen recorder with internal audio feature on the app for Android 10 or above. You will only have to shake the device to end the recording. AZ Screen Recorder lets you record live shows, gameplay, and even video content on apps like YouTube. Here are the steps to follow on how to record your screen on Android with AZ Screen Recorder.

Step 2: Launch AZ Screen Recorder and give the necessary app permissions. Then you will see four prominent floating buttons on the side of the screen. Tap on the gear icon which will take you to Settings. Now you need to configure the settings according to your preference. The settings include frame resolution, video resolution, bitrate and other parameters.

Step 3: Open any app on your device’s screen which you want to record. Tap on AZ screen recorder widget icon located at the side of your device screen and tap on the Red Record button to start recording.

Step 4: To stop the recording, tap on AZ screen recorder widget icon. From the icons, you can either stop or pause the recording. The recorded video will be saved in your Android device gallery.

ADV Screen Recorder Android comes with versatile features so that you can easily capture screen videos and screenshots as per your requirements. The app lets you draw manual annotations while capturing your screen. It lets you disable or enable audio according to your preference. The screen recorder also lets you edit the recorder video by adding text, cutting, or inserting images. Here are the steps to follow on how to screen record with sound on Android with ADV Screen Recorder. 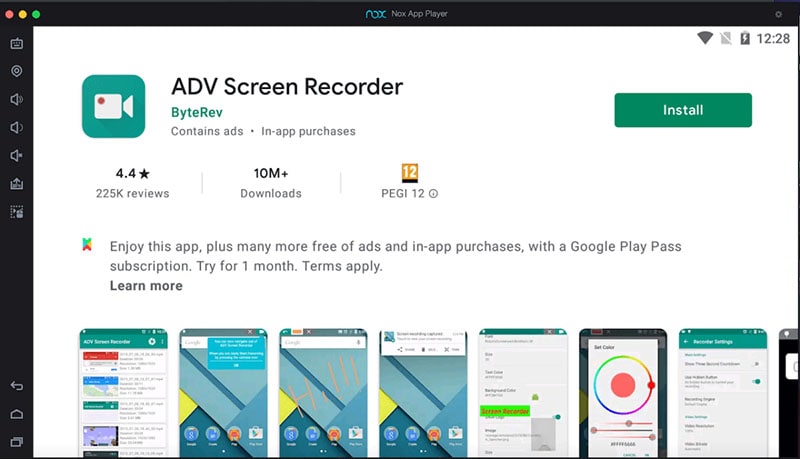 Step 2: Launch the app and give the necessary app permissions so that its floating widget can appear on your screen.

Step 3: Prepare your device screen to start recording. Once you are ready, tap on ADV floating widget icon (video camera icon) located at the side of your device screen. This will show more icons from which you have to tap on Record button.

Step 4: To pause or stop recording, tap on ADV widget icon and tap on Stop or Pause button.

The recorded video will be saved on your device gallery. You can open ADV screen recorder app and view the recorded video as well. You can also go to Settings to change the configurations such as video resolution, bitrate, frame rate, orientation and others as per your requirements. 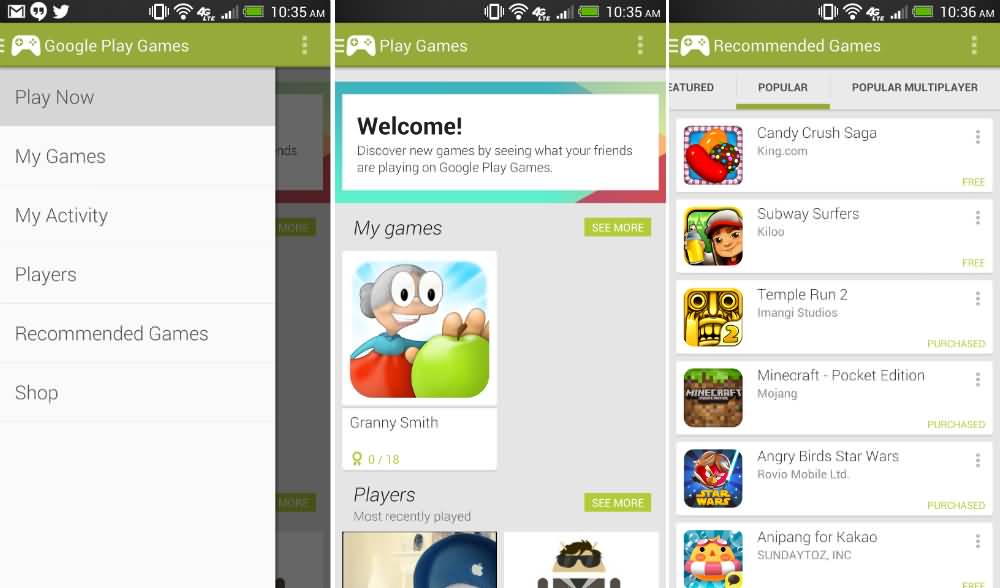 Step 2: Open Google Play Games app and choose the game whose gameplay you want to record.

Step 3: On the game's details page, tap on Record gameplay.

Step 4: Select the video quality and tap on Next.

Step 5: Tap on Launch and you will see a floating video bubble that will include all the icons for recording.

Step 6: Tap on Record icon and your recording will start within 3 seconds.

Step 7: To stop recording the gameplay, you need to drag and drop the floating bubble on Close icon.

Once the recording is complete, it will be saved on your device's gallery. You will receive a notification stating 'Video saved to gallery'. Tap on the notification to watch the video.

Super Screen Recorder is one of the best screen recording apps for Android. You don't have to worry about rooting your device, time limit, or watermark. It lets you have screen recording in 2K resolution. You can even edit your video and do live streaming. The app can show your touches and taps on the screen while recording. You can even schedule any recording and the app supports recording of internal audio from Android 10 onwards. 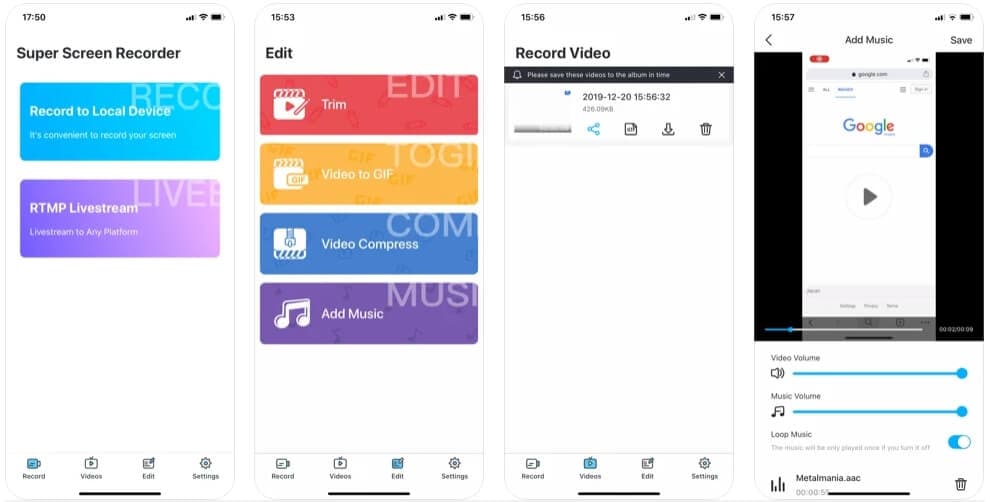 Apart from recording, there are options to take screenshots instantly and record using your mobile phone camera. It comes with a paintbrush tool that lets you customize your videos. Once the recording is complete, you can even use the video editor to merge or trim the video. It allows you to rotate the video file or even add music. Here are the steps to follow on how to screen record with sound on Android using Super Screen Recorder app.

Step 1: You need to install Super Screen Recorder on your Android device from Google Play Store.

Step 3: Now you will see a small floating button that will have all the controls of the app. Prepare your screen for recording and tap on Record icon.