Screencasting on any version of Windows 7/8/10 is a simple task and there are countless software products that enable you to record your desktop activities.

Most screen recorders create MP4 or MOV files that can get quite large in size, which makes them hard to send or easily distribute over the Internet.

GIFs, on the other hand, are small in size, and sending them via email or posting them on social media networks won't require you to wait for a long time until the file is uploaded to the web.

However, there aren't that many screen recorders for Windows OS that let you save screen recordings as GIF files, and for that reason, we've composed the list of best GIF Recorders for PCs. Let's have a look at some of the most powerful software products for creating animated GIFs on Windows.

Here are 8 best recorders to have gifs for you to have a look. 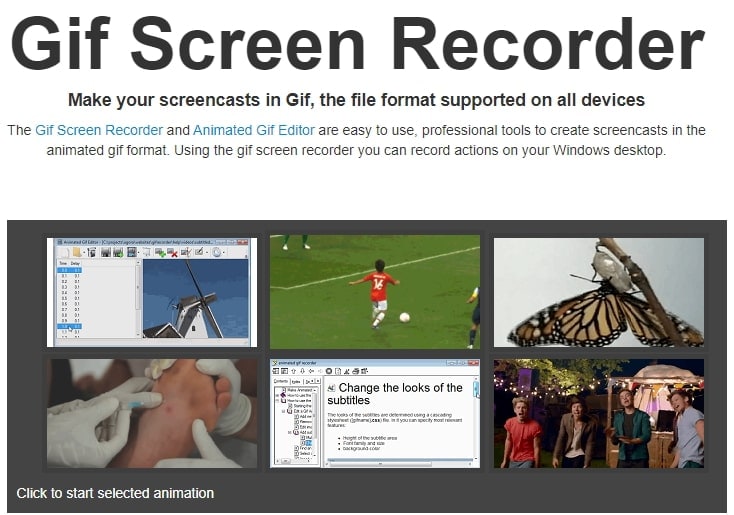 If you were looking for a powerful screen recorder that offers easy-to-use screencasting tools, then this software is the right choice for you.

You can easily create GIFs that can be used in PowerPoint presentations, posted on blogs and websites, or sent via email.

GIF Screen Recorder lets you customize the region of the screen you'd like to capture and it enables you to select the length of the preferred frame rate of the recording.

Starting a new screencast requires you to just designate the area of the screen by dragging a corner of a large red rectangle that appears on the screen when you launch the GIF Screen Recorder and to hit the Record button.

The software also features the editing mode where you can add subtitles to your animated GIFs or export image frames.

This cross-platform application provides all the screencasting tools you'll need to capture an animated GIF on your Mac or PC computer.

Its users can move the screen recording frame, even while recording, choose the frame rate or Start and Pause the recording using the Shift + Space keyboard shortcut.

The software's main window is transparent and it allows you to see a portion of the background beneath it. The LICEcap screen recorder will capture the portion of the screen over which it is located, so you'll have to place it on the part of the desktop you want to record.

Click on the Record button to capture the animated GIF file, and proceed to save it on your hard drive. LICEcap enables you to save your GIFs in LCF and GIF file formats, but its file-sharing capabilities are next to non-existent. 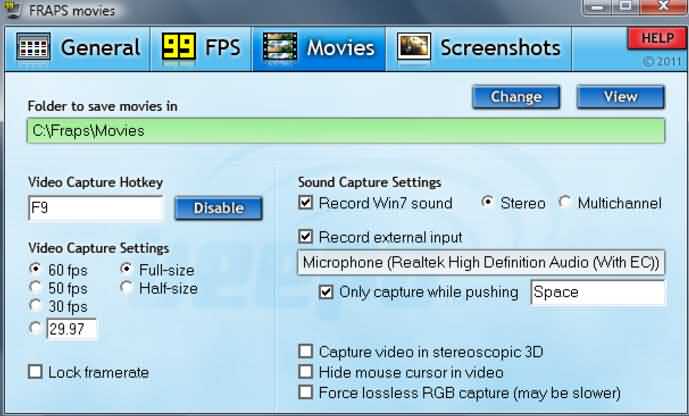 Fraps is probably one of the oldest screen recorders for gaming because it was released 18 years ago, and besides providing video capture features, it can also be used for benchmarking or displaying frame rates.

Fraps don't offer support for GIF files, which means that you can only use it to create an MP.4 or AVI file that you can later convert to GIF file format. Capturing videos and still frames outside of a video game is not on the list of options the software offers.

The free version of this screen recording utility can only record 30-second videos, which limits your screencasting possibilities and makes it a perfect tool for generating short videos that can be easily converted to GIFs, at the same time.

Fraps works best with Nvidia and AMD Radeon graphics cards, and it is compatible with the most popular video games on the market. 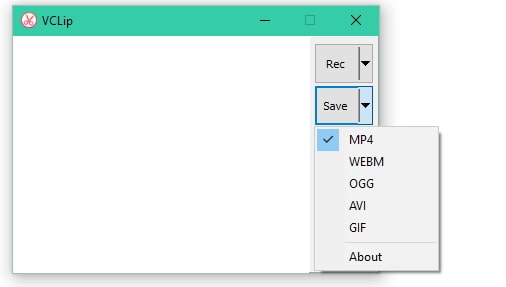 This basic screencasting tool lets you capture animated GIF files, but it doesn't offer much more than that. Its users can produce GIFs that feature a full screen or select the area of the screen they want to record.

The Windows-based application allows you to select the frame rate and the output format. Besides, the GIF files VClip can also produce MP.4, AVI, OGG, or WebM files and it can capture videos at 30fps per second.

The VClip's window is transparent, and you can drag one of its corners in any direction if you'd like to extend the area of the screen you want to capture.

Make sure that the GIF file format is selected in the Save menu, and hit the Rec button to start capturing your animated GIF file.

Click on the Save button when you want to stop recording and choose the destination on your hard drive where the file will be saved.

ShareX offers the tools for screen capturing, that are powerful enough to enable you to create GIF or video files. This open-source software provides a lot of screen recording features, and it lets its users utilize the Freehand, Ellipse, and Rectangle region types.

The screen recording utility doesn't allow you to change the frame rates or select the size of the video.

The annotation tools such as speech balloons or text outlines can be added to all types of screen recordings you produce with ShareX. You can choose from several different upload methods and you can share the file on any popular social media network including Flickr, Twitter, or Vimeo.

ShareX also offers photo editing features, but it doesn't provide any video editing options, so making adjustments to the GIF you create with this application requires you to use another program. 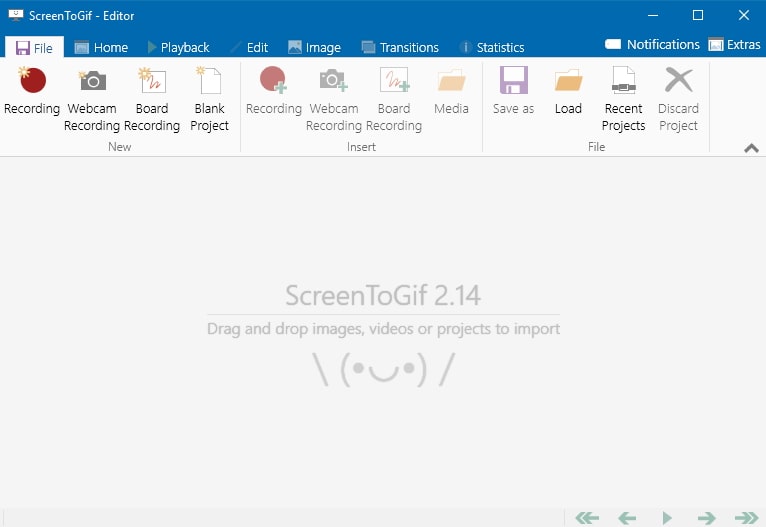 Making animated GIF files with this Windows-based application is a quick and fun process. The ScreenToGif screen recorder offers three different methods of capturing a screen. You can either take a screenshot, record a video, or use the sketch board.

To start recording the GIF animation, you should just adjust the size of the software's transparent window and click on the Recorder icon. The Webcam option is also available if you want to create PIP videos or GIF files.

You can save your files in GIF format and you use the software's editor to edit each frame you've captured. Editing animated GIFs that were created with other screen recorders is also an option that this remarkable screen capturing tool offers. 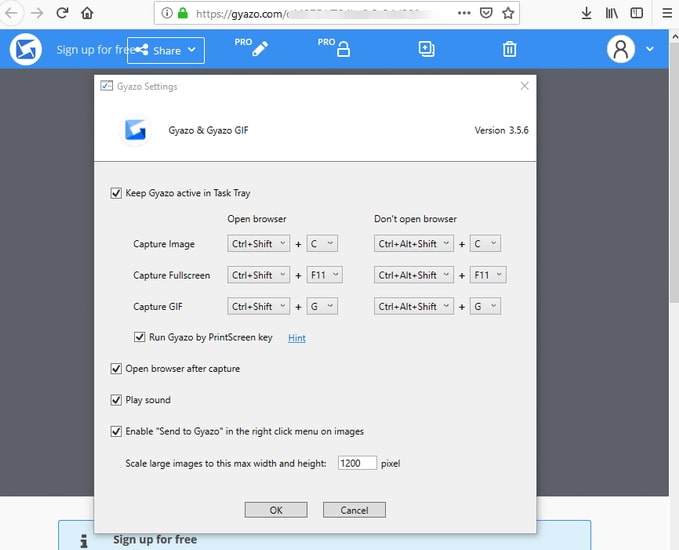 Creating a GIF file with Gyazo is a straightforward process that takes a minimum amount of time and effort.

The free version of the app doesn't offer any editing tools, but if you upgrade to Pro or Team plans you'll be able to add annotations to your files or use the app without having to deal with ads. The Team plan can be used by up to five different people, and it allows you to share files privately with the team.

Select the Capture GIF option in the software's main window and then designate the area of your screen you'd like to turn into a GIF. After the screen recording session, you can edit the file by adding text elements or drawing with a free hand.

Gyazo provides powerful file-sharing options, and it enables you to share your animated GIF files with a single click. 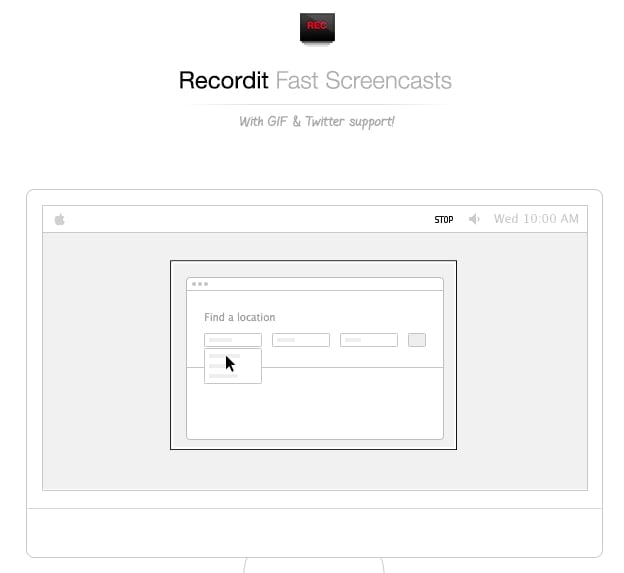 There is nothing complicated about using this simple app the capture your desktop. Once you've installed the app you can click on the icon that is located on the Task Bar or launch it from the Start menu.

You should hold and drag the left mouse button to select the portion of the screen you'd like to record, and then hit the Record button below the screen capturing frame you've created.

Click on the Stop button, to finish the screen capturing session, and then wait for the video to be uploaded to Recordit's server. Clicking on the notification that informs you that the video was successfully uploaded will take you to its online destination.

Play the file and click on the GIF button if you want to convert the video file into a GIF. You can either download the file you've created or use its URL to share it on social networks.

First of all, you need a GIF recorder. You can choose to download LiceCap. First, open the software and click the “Record” button. Next, select the place you’d like to save it. Then, it has a countdown of 3 seconds before recording. Now it’s time to record gifs!

Definitely yes. All you need is an excellent tool. Here are some free tools that can help you turn a video into a GIF. Convertio is an online tool helping you convert your mp4 files to gif for free. UniConverter is also a versatile tool, which can not only turn your videos into gifs but also convert images to gifs for free.

3. What is the best GIF recorder on Mac?

Actually, lots of apps can record and make GIFs on Mac. I will recommend 3 software – Giphy Capture, GIF Brewery, and Smart GIF Maker.

Max Wales
Max Wales is a writer and a lover of all things video.
Follow @Max Wales
You May Also Like
How to Combine Multiple GIFs into One with GIF Combiner

The article will provide you step by step guidance about how to merge or combine multiple GIFs to one together with the best GIF combiners.

We rounded up 10 best high-quality video to GIF software to make you convert GIF between video with ease online or on Windows/Mac.

You can easily pick any of these tools and start creating your own animated GIF to impress your friends around.