Wondershare Filmora is one of the most popular video editing software among YouTubers, which provides the video stabilization tool to remove shake from videos within one-click. Download and have a try now.

Click here to get Filmora for PC by email

Today, we all use cameras and cell phones to capture many important events in our lives. Sometimes the recorded videos are shaky due to various factors such as a sudden hand movement, a lack of stabilization in our recording equipment, and so on.

Users can utilize video stabilizer applications to solve this issue. Using these applications, users may quickly smooth out shaky areas of a video on their Android smartphones. However, finding an excellent Android Video Stabilizer is still a hard task due to the number of applications present in the market. But don't worry, a few of the best video stabilizers are reviewed in this article. Let's get going!

01 What Is the Difference Between OIS and EIS?
02 Best Free Video Stabilizer Apps for Android

Part 1: What Is the Difference Between OIS and EIS?

The majority of individuals favor OIS over EIS. A hardware approach is always preferable to a software platform since EIS is essentially a repair solution that causes picture resolution deterioration by cutting it and estimating what this would seem like if it were steady. OIS also performs better in low-light conditions. The best video stabilizer app for android is the one that incorporates both approaches.

Moreover, OIS and EIS both hold a significant reputation for video stabilization. And not much, but some people prefer Electronic Image Stabilization (EIS) to stabilize their video as it converts the optical signal to a digital one. You will get a better understanding of both the stabilization technologies after reading what's written below:

Electronic image stabilization operates on a fundamentally different premise, with the problem being tackled at the coding layer after the visible light has been transformed to a digital signal.

The picture is stabilized with this approach by altering the optical path of the detector. Because this is real-time correction, no image change or degradation occurs. The lens component is rotated such that it is parallel to the picture plane.

Google Photos is the first application on our list since it is built-in and can instantly stabilize any video length. It also includes tools for editing films and photos. Google Photos is a simple photo uploading and storing software for Android which can also be utilized as a video stabilizer.

This software has a dedicated Stabilize feature to stabilize a shaky video easily. It may be used to trim, label, and modify videos in addition to stabilizing them. It also allows users to eliminate audio from videos if desired. Thanks to this built-in application, you can easily stabilize video android.

Step 1: Launch the app and choose the video you wish to stabilize.

Step 2: Go to the Edit menu and pick the Video option to see the stabilizer icon.

Step 3: Now, using the video timeline, choose the video section you wish to stabilize and touch on the Stabilizer symbol to begin the video stabilization process.

Step 4: To save the stabilized video, use the Save Copy option.

PowerDirector is amongst the best video stabilizer app out of all the options available on Android. Using this video editing software to turn a shaky movie into an interesting film is simple, and the results are spectacular. The PowerDirector app contains a video stabilizer with strength adjustable to reduce camera wobble.

The interface is simple, allowing both novice and experienced filmmakers to utilize the video stabilization tool easily. 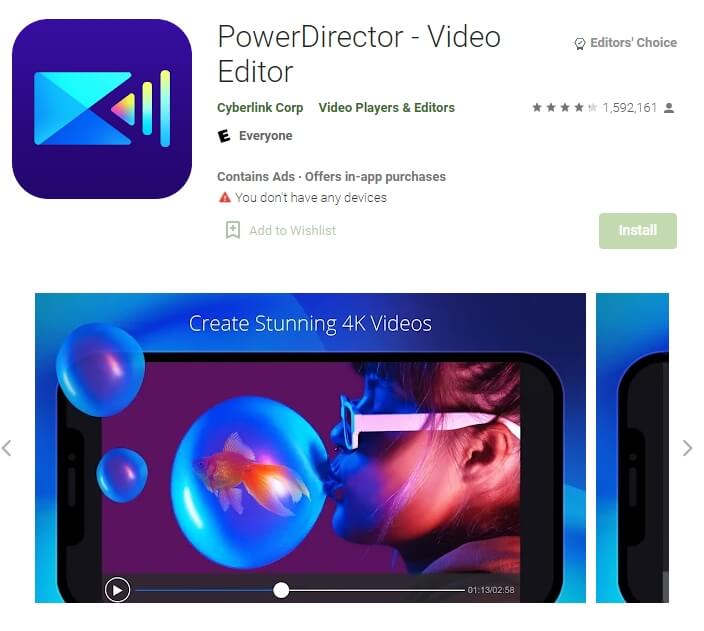 Now, follow the instructions below to stabilize video using PowerDirector:

Step 1: Launch the app and import the video you wish to stabilize. Put the video to timeline.

Step 2: Click on Edit, and pick the Stabilizer tool from there.

Step 3: Now, adjust the Motion Effect through the slider for stabilizing and save the edited video.

Shaky Video Stabilizer is an Android video stabilizer software, which is completely free. Users may use this tool to stabilize shaky video footage of various sorts. Furthermore, it supports typical video formats supported by Android, such as MP4, 3GP, MKV, etc.

To stabilize a video, it has an internal video analysis tool and different settings (shakiness, smoothness, accuracy, and so on) that users must define to get the desired outcome. It also includes a useful video player for playing videos before and after stabilization. Compared to other applications, this software takes longer to stabilize a video. 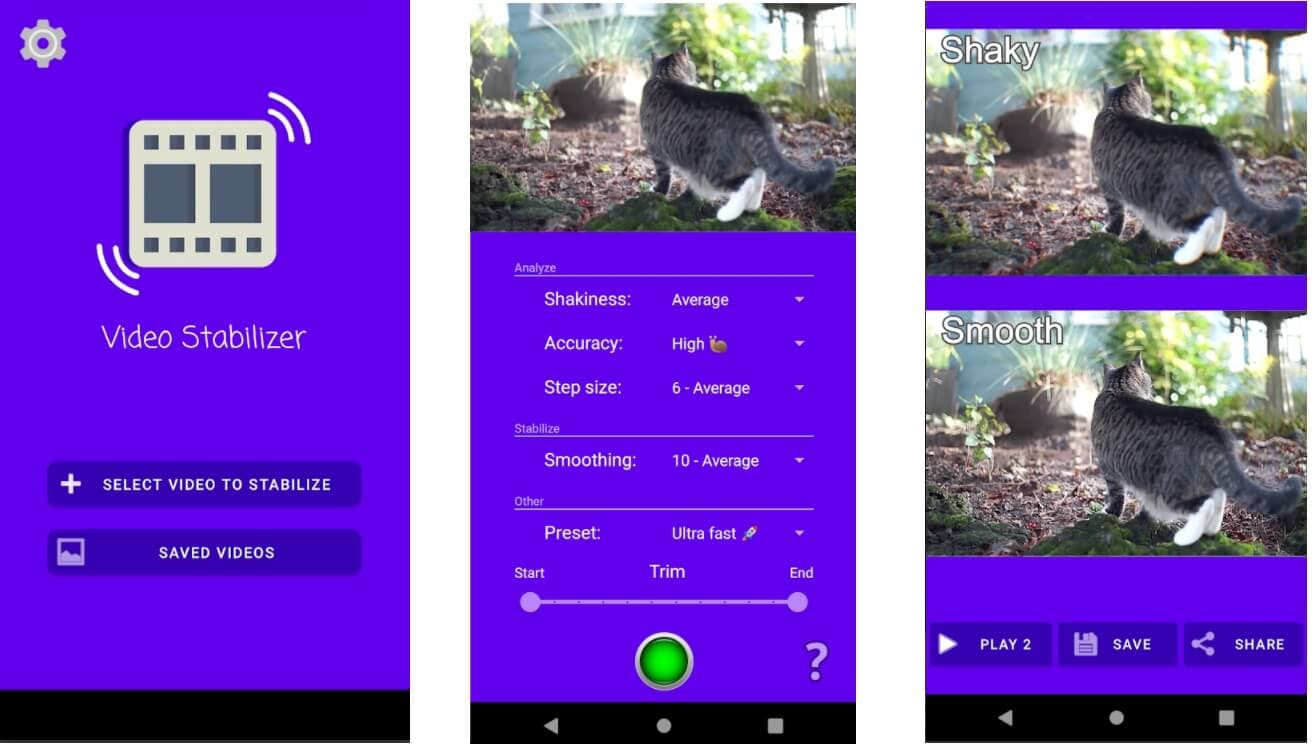 Now, follow the instructions below to stabilize the video using this app.

Step 1: Open this app and click the Select Video icon to explore and upload a movie from the Library.

Step 2: Following that, users must specify the Analysis settings, which are Shakiness (Low, Medium, or High), Step Size, and Accuracy.

Step 3: Then, specify the Smoothing (between 1 (low smoothness) to 30 (high smoothness) settings, Zoom, and Crop.

Another free video stabilizer software for Android is Microsoft Hyperlapse Mobile. It is mostly used to stabilize hyper-lapse films, as the name implies. Users may, however, enter ordinary films onto it and stabilize them.

It also allows users to boost video speed to convert regular films to hyper-lapse recordings. It also has a preview player for previewing input video at various rates. After completing video stabilization, users can save the output movies in 720p and 1080p versions. It may be used to distribute stabilized videos on various social media channels swiftly.

Now, follow the instructions below to stabilize video using this app:

Step 1: To upload a shaky video, open this app and click the Import icon. Users may also use the Record button to create and stabilize a video.

Step 2: Now, choose the video segment you wish to stabilize.

Step 3: Touch on the Right Tick symbol and use the speed slider to alter the video's pace.

Another free video stabilizer software for Android is Video Stabilizer Dshake. Users may use this program to stabilize small videos rapidly. This project incorporates a complex method to identify unsterilized areas of a video and then automatically stabilize them. Unlike other comparable programs, it analyses and stabilizes a video without the need for human intervention.

Users may crop a video using both the Fixed and Adaptive crop methods with this application. This free version only stabilizes movies of up to 20 seconds in length. People have to subscribe to the paid version to eliminate this restriction. Moreover, It is one of the most basic video stabilizer applications, allowing anybody to stabilize films instantly.

Now, follow the instructions below to use this software to stabilize a video.

Step 1: Launch this app and pick a video by hitting the Add button.

Step 2: When you upload a video, this software begins the video analysis techniques and displays a sample of the stabilized video.

Step 3: When the analysis is finished, click the Save button to begin the video stabilization process.

Video Stabilization is the need of the hour as you cannot always capture a stabilized video, especially in Android smartphones. That's where the android video stabilizer comes in. But to find an excellent stabilizer application is a difficult job. To overcome this, you will find a few elect android video stabilizers and how to use them in this article. Start removing the shaky part of the video with ease!