Download on the App Store
Get it on Google Play
Download
Download
Call us: +1-60-4343-8521
Mon-Fri 6:00 PM to 11:00 AM Pacific Time
International phone rates may be charged by your service provider
Filmora Video Editor
Attach Text/Image/Element/Video to Follow Motion
Try It Free Try It Free

Have you ever been mesmerized by a video with text or emoji’s moving together with objects? That effect is produced using motion tracking and isn’t very complicated. Today, we will introduce some text motion tracking software (free & paid) tools that allow you to pin text to video with minimum effort. There will also be detailed tutorials on how to utilize each tool. Let’s get started.

Note: The list below is in no particular order.

The newly released Wondershare Filmora X version has added the motion tracking features, which allows you to track moving objects in a video clip, and attach images, texts, elements and videos to follow the movement path.

How to Use Filmora Video Editor To Do Text Motion Tracking? 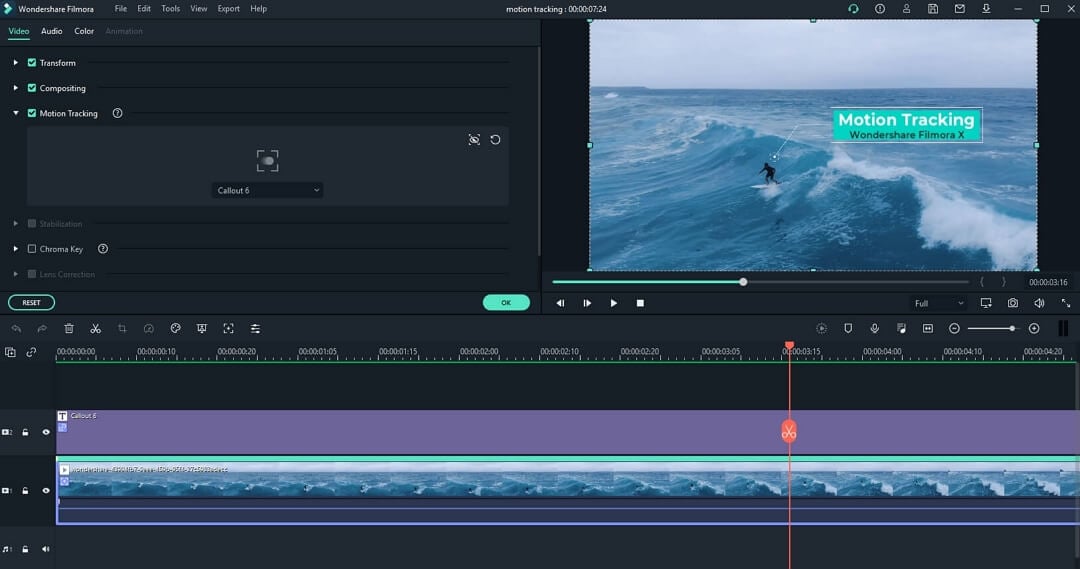 Below is a step by step video tutorial about how to use the motion tracking feature in Filmora. Keep watching.

There is no automatic tracking feature in Premiere Pro to pin text to video. Therefore, you need to manually position your text and add keyframes frame by frame. But the overall effort required and the final result isn’t much different from traditional editors.

How To Do Text Motion Tracking In Premiere Pro CC? [Main Steps]

The whole process is relatively easy, although tedious. But the process becomes very complicated when you have more dynamic motion in your clip

Adobe After Effects is an editor that focuses on animation & creative composition. This app has been developed as a companion to Premiere Pro for creating short & flashy motion graphics and visual effects for projects.

Motion tracking in After Effects can be done using the Point Tracker, which has one-point and up to four-point tracking. Other tracking options include the built-in 3D Camera Tracker that lets you reverse engineer a scene and the spline tracker that enables you to track masks on an object. There is also Mocha AE, a planar tracker from BorisFX. The Point Tracker is the most flexible and versatile in After Effects. We’ll use it to pin text to video.

How To Do Text Motion Tracking In After Effects? [Main Steps]

We’re done. As we stated above, other types of trackers are also available for you to experiment with. The overall tracking functionality is much better than Premiere Pro.

Sony Vegas Pro is a non-linear video editor with the so-called “power of Artificial Intelligence.” It is one of the few editors out there that has acquired popularity among professionals and amateurs alike.

Text motion tracking in Vegas Pro is done using  Bézier Masking FX (new update introduces a separate tab for motion tracking). The tracking process is automatic. Keyframes are created automatically frame by frame. It isn't perfect, but it gets the job done in most cases. When it fails to track objects correctly, you can manually edit the keyframes.

How To Do Text Motion Tracking In Sony Vegas Pro? [Main Steps]

As we've seen above, all the editors have some kind of automatic tracking feature, Premiere Pro being the only manual exception. All of them do a reasonably good job when it comes to pinning text to video. Professionals would be more satisfied with the added versatility and control in After Effects. Filmora, Filmora, Vegas Pro and Premiere Pro, on the other hand, are better suited for amateurs.

Thank you for your comment. We will review it within few days.
You May Also Like
Top 16 Best Free AVI Video Rotators [Windows, MAC, Android, iPhone, and Online]

Converting a video to GIF has never been easier, thanks to these carefully reviewed video-to-GIF converter apps. Read through to get one that will suit your needs.