The boss Plantera resides in the Underground Jungle in Hardmode. If you want to complete the game, you have to defeat her. This is how you do it. 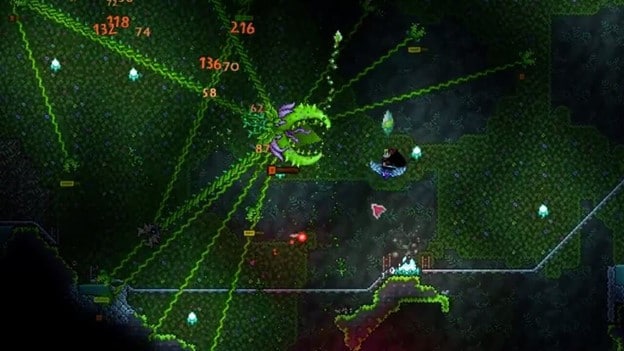 For Terraria's later stages, you must defeat Plantera, the Queen of the Jungle. Once you defeat the Mechanical Bosses, you will be able to find her Bulbs in the deepest sections of the Underground Jungle biome.

It's not easy to fight Plantera. It can be a struggle to defeat her without a sound strategy due to the tight spaces of the Jungle and the constant spawning of Hardmode Jungle enemies. The following article covers the best weapons, armor, and strategies that will help you win the fight.

Defeating the three main Mechanical Bosses is a prerequisite for anything you can do in hard mode. Unless you know what you are doing, Plantera is going to be harder than anything you have ever encountered before. As well as the armor and weapons, you'll need to buy all the Hallowed gear. Be sure to pick the perfect helmet for your style.

Choose the right helmet based on whether you will use melee, magic, or ranged weapons. You must defeat all three Mechanical bosses in order to advance in the game so push through it. The jungle will grow restless once you've defeated the third enemy. You'll know you are ready for the next challenge when the jungle becomes restless.

Find A Plantera Bulb In The Jungle

Finding a Bulb is one of the most challenging parts of the project because it is a hit-and-miss situation whether you find it quickly or take some time. If you are looking for the bulb, look for a giant purple bulb that seems out of place. If you walk into the underground jungle, you might find the bulb. In case you do manage to find one, make sure not to hit or break it because destroying it will lead to the spawning of the boss.

Oftentimes, you can find it by zooming in on a map, and you'll see a small purple square, and you'll know the difference between the color and other things because you have never seen it before. It's just a matter of not destroying it and constructing a house near it so that you can spawn there if you die fighting enemies around the area.

Build The Boss Arena Around The Bulb

Although digging out the area around the Bulb to create a boss arena might be a little annoying, you will be very glad you did so because you will need a lot of room to move around when fighting the boss. Since Plantera can go through walls, but you cannot, the easiest thing to do is open up the area so you can fight it more easily.

The person preparing for the fight should know exactly how the fight will be conducted. For melee builds, it would be best if you had a ranged weapon that could hit from a longer distance. Get close to the action when doing a melee build. Depending on your weapon, you will need a lot of ammunition when building a ranged build.

As well as ranged potions, they can be very useful. You should have a lot of mana potions and high-damage magic weapons if you are doing a magic build so that you can do as much damage as you can to the boss. Don't worry about running out of items as long as you have a good supply in your arsenal.

When Pantera takes more damage, she shoots pink Seeds at an increasing pace. As soon as her health drops below 80%, her bouncing Thorn Balls begin flying, and she emits poison seeds.

She transforms into her second form when she is reduced to half her maximum health: her pink petals fall away and reveal a thorn-filled mouth. A more aggressive form of Plantera, he tries to make contact by moving aggressively. In addition, Plantera's mouths sprout from vines that attach to her body (known as "Tentacles"). Plantera will be much easier to battle once all its tentacles have been killed.

If the player leaves the underground jungle, either to the surface, to the Underworld, to a corrupted or crimson part of it, or to another biome, Plantera becomes enraged. Consequently, she is now able to deal double damage, double defense, and increase her movement speed, along with changing her attack patterns and directly attacking the player. When Plantera enters the Underground Jungle biome again, his behavior returns to normal.

Due to the close proximity of the boss, you want to have the best defense possible. It is possible to use the Death Sickle to kill her since she spawns very easily and can be torn apart by it. Any other weapon will not be able to handle this boss, including the Yelets, Terra Blade, Light Disks, Shadowflame Knife, or Fetid Baghnakhs. Circulate around her, taking the damage away slowly as you take your potions. If you can execute this strategy flawlessly, it is an effective strategy.

It is good to have armor that increases mana regeneration and magic damage, even if the defense isn't important with magic. Crystal Serpent and Sky Fracture are the best weapons to use. Nimbus Rods, Shadowflame Hex Dolls, Magic Harps, Magic Daggers, and Life Drains can also be used against this boss. Fly around the arena avoiding her attacks and throwing your own as you do so. First, take your magic potions. Whenever you need mana, use a potentiation.

The defense does not matter as much when it comes to surviving, but range-boosting armor can help. It can also mean the difference between life and death to have ranged potions, so make sure you use them. Depending on which bullets you choose to use, the Uzi and Megashark are the best-ranged weapons to utilize. A Chlorophyte Shotbow can be used, but it is better to use a gun rather than a bow since it has a faster rate of fire. Flamethrowers are also useful if you have them. As you unleash total destruction on the boss, use your potions and go in a circular pattern.

Take Advantage Of The Rewards After Beating Terraria Plantera

Terraria Plantera gives you many items, but you will receive extremely important one when you defeat her every time. She gives you the Temple Key. To unlock the Golem boss fight, you have to access the giant temple in the jungle biome. He is an entirely different story when it comes to strategies, so that I won't go into specifics, but he is harder to beat than Plantera. You should congratulate yourself before moving on to the next level and reap the rewards from the boss you just defeated.