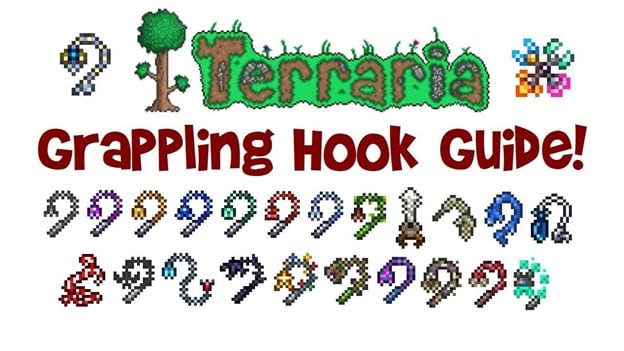 Using the grappling Hook does not require placing it in the Hotbar, as it can be accessed via a designated hotkey (E [LT on Xbox]) and will fire the Hook once the hotkey has been pressed. Nevertheless, its range is limited. Wood Platforms can be caught by it easily.

While grappling to a wall, you may use other tools simultaneously, but note that if the block you are attached to is destroyed, the connection will be broken, and you will fall. If you connect to a mud block mid-flight, you will continue to take damage.

Terraria is incomplete without hooks. It's difficult to imagine Terraria without the Grappling Hook crafted from a lucky drop, the Lunar Hook, and so much else. As a player acquires the Hook, everything is up to him from thereon. Make sense?

This article contains a list of Terraria's very best hooks. Hooks have unique uses late in the game, which a clever player can explore by switching Hooks for cave exploration and boss battles. 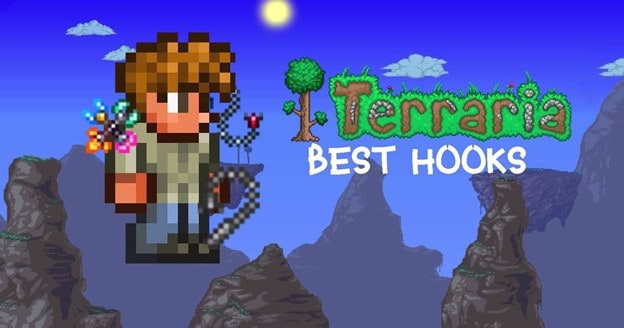 Whenever Terraria Hooks are discussed, it's impossible not to mention this, the original Hook, the Hook that started it all. The minute new players grab a Grappling Hook, they realize how difficult it is to navigate caves using ropes and wooden platforms.

The truth is, getting a Grappling Hook is not easy. If the player does not have access to the Goblin Tinkerer NPC, who sells a Hook for two gold coins, they must farm Skeletons, Undead Miners, Hoplites, Undead Vikings, and Piranhas until a Hook drops. In addition, it has a 4% chance of dropping from Piranhas.

The Ivy Whip and Dual Hook are both available in Hardmode, making them both unique tools. Players can choose what to use based on their preferences. By using the Dual Hook, players can fire two hooks simultaneously, allowing for a greater range and velocity compared to the Ivy Whip.

In contrast, you don't get to suspend yourself in the air, but the rapid movement that is possible with the Dual Hook makes it an excellent choice if you are trying to traverse landscapes or caves at high speeds. You can also use it to fight bosses.

One of the more interesting hooks in Hardmode is this grappling Hook that the Queen Slime drops. Using the Hook prevents the player from taking damage by teleporting them immediately to its location.

To get out of tight spaces, use the Hook of Dissonance. Due to the retract time of the Hook being less than half that of most other Hooks in the game, if the player gets the technique right, they can move extremely quickly. The Hook is a lot of fun to use.

A classic in the game, the Anti-Gravity Hook is considered by many to be the best. A unique feature of the game is that it allows players to hover about a fixed point in the sky. During the Invasion episode, Martians dropped this piece of martian technology, which defies gravity.

If used correctly, it can be one of the most overpowered tools in the game, with a reach of 31.5 blocks and a velocity of 14. You can circumnavigate a lot of damage by spinning around a block in circles, especially when faced with Duke Fishron.

The Steampunker NPC offers the Static Hook for a reasonable price of 50 coins. The Hook can reach up to 40 tiles, which is the highest number in the game and is the first choice for those who enjoy building.

By choosing their distance from the latched point, the player can choose their proximity. By doing this, you are able to add on to a build and then extend yourself, providing you with a greater number of angles from which to place blocks and decorate your Terraria masterpiece.

Despite being considered one of the more powerful Hooks in the game, its tooltip reads: "You want the moon? Just grab it and pull it down!" This makes sense since it is arguably the most powerful Hook in the game. Lunar Hooks allow players to fire four Hooks at once at the same time, as fast as they can hit the E key.

Lunar Hooks can only be obtained after taking down the four pillars during the Lunar event: Nebula pillar, Solar pillar, Stardust pillar, and Vortex pillar. Each pillar requires six fragments. All colors of the pillars can be seen on the Lunar Hook once it has been crafted. The result is stunning.

So, this was our list of the 6 best grappling hooks. As mentioned earlier, hooks are an important part of terraria, and there are a variety of hooks available. All hooks have unique uses, and players can master them to perform different tricks with different hooks. They serve multiple purposes. We also recommend you try out different hooks for caving and boss fights and see which Hook fits you the best.