Terraria is one of the popular 2D action-adventure games that lets its players explore, mine, craft, and combat to survive. This is a huge game with so many places and several treasures to be explored by the players. If you have already explored everything in this game but still want to keep playing this game, these best Terraira Mods will help you enhance your experience of Terraria. If you are still playing this game, you can use these Mods to add new features, places, and maps to Terraria. But if you have already completed all the bosses and there is nothing to accomplish in the Terraria, you should try these best terraria mods for mode adventure and thrill.

How to install these Best Terraria Mods

Before we move toward the top 10 best terraria mods, make sure to download and install tModLoader into your computer. Almost all of the following mods will work using the tModLoader. But it is recommended to check the process of each mod to avoid any kind of problem. You can easily search and download Terraria Mods from this loader. It provides you with a wide range of options ranging from controls, loading, downloading, and more. 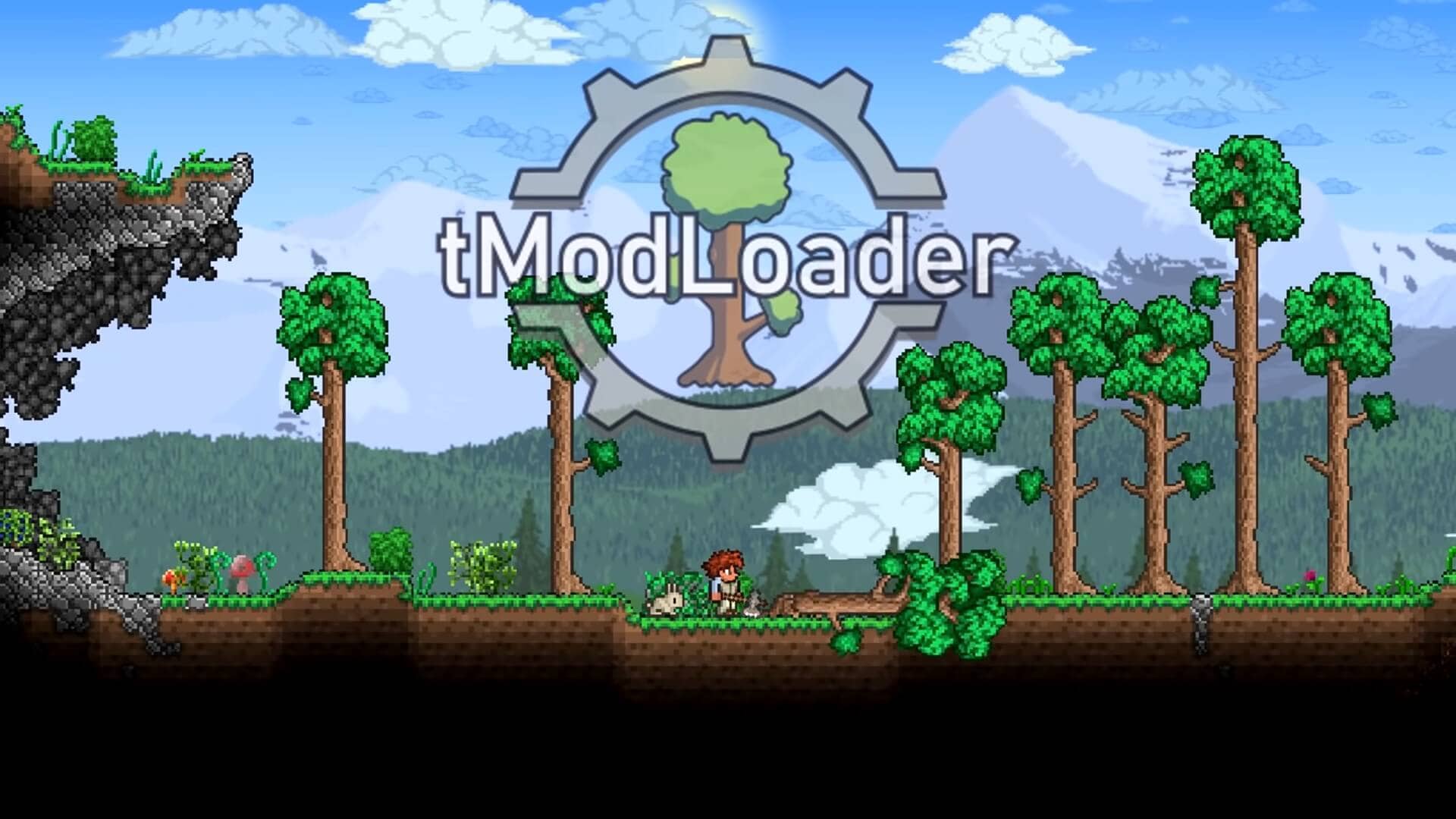 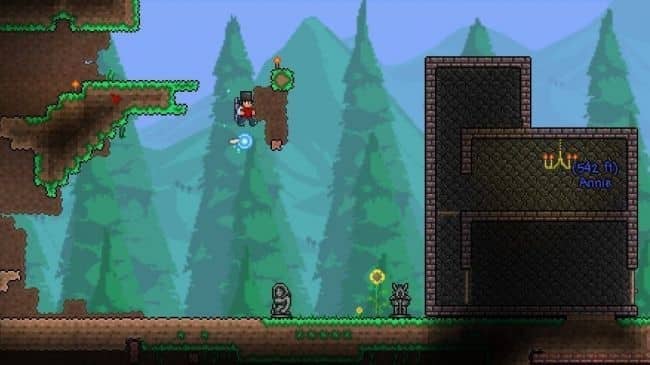 Terraria is one of the amazing games with everything similar to an RPG. But this mod will provide it a new dimension and structure. N Terraria turns the game into a fully-featured Role-playing game. This mod contains races, classes, quests, level systems, and more. This mod increases the thrill and adventure of playing Terraria with all these new features. It adds more depth to this deep adventure. Unfortunately, this mod also increases its difficulty level and makes Terraria hard to play. 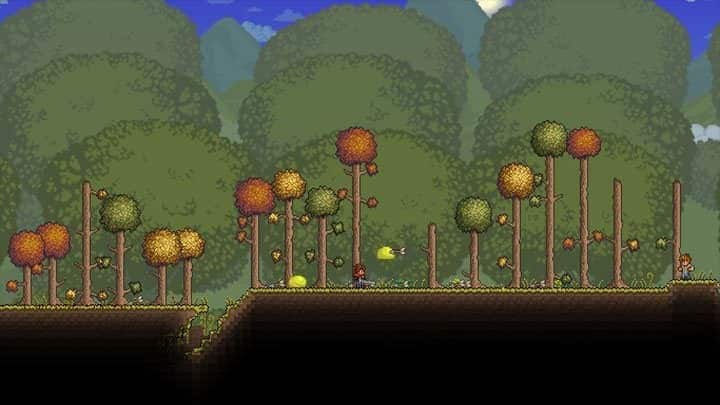 Terraria Overhaul enhances the existing features and options instead of adding something new to the game. Its main goal is to add new gameplay mechanics. It includes game seasons and players' abilities and moments. One of the biggest changes it will make is the change of the combat system. It will create an immense fighting system that requires strategies and rapid actions. The seasons include various environmental cycles. After every 12 in-game days, the season will change, bringing new and unique environments, such as spring to winter, changes in the number of floods and lightning, and more. 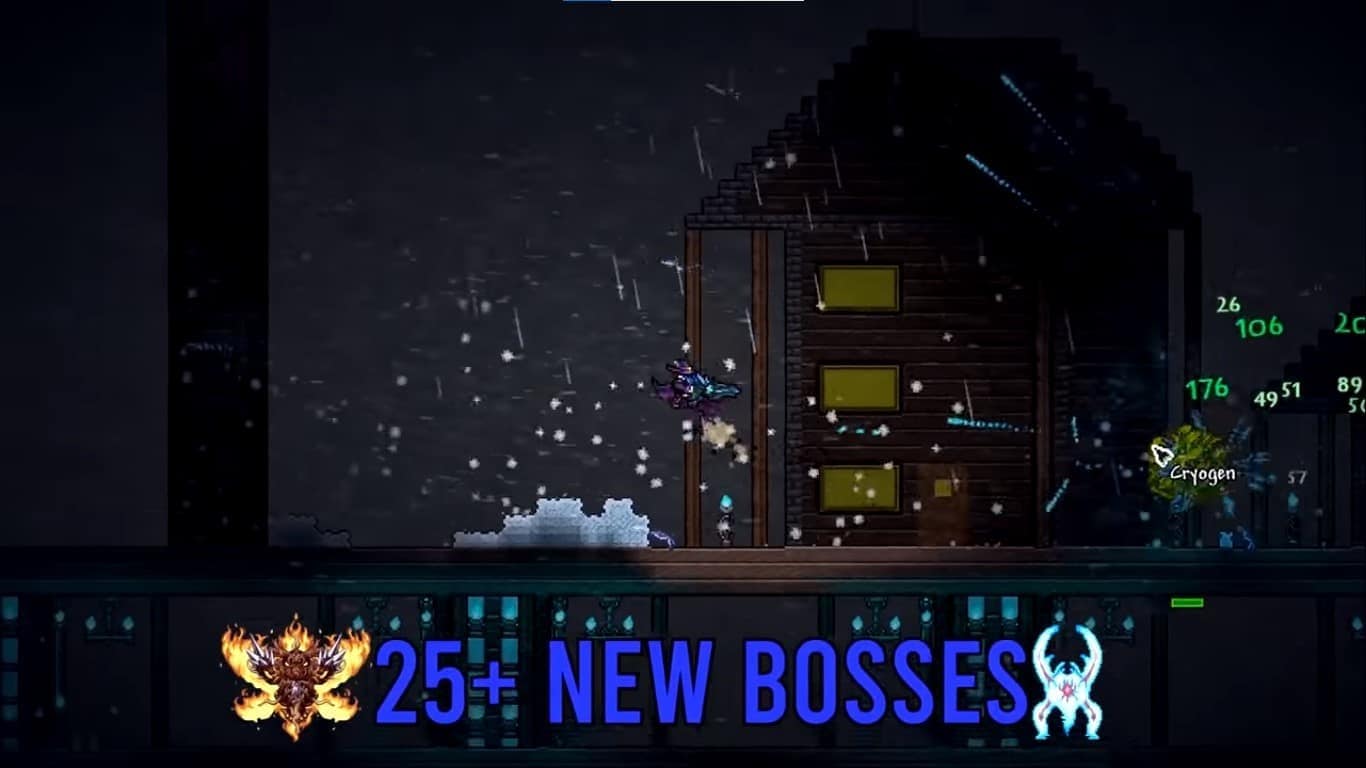 Calamity is one of the best Terraria mods because it brings huge and impactful changes to the game. It includes a wide range of new and amazing stuff and items. It contains 24 new bosses, each with a unique strength and ability, around 1,000 new items, and 200 new enemies. There are also five types of new minable ores. If you have been playing Terraria for a long time, this will be the most challenging and hard gameplay you will face with its five difficulty levels. The developers are continuously working toward improving the mod by conducting polls on its tModLoader page. 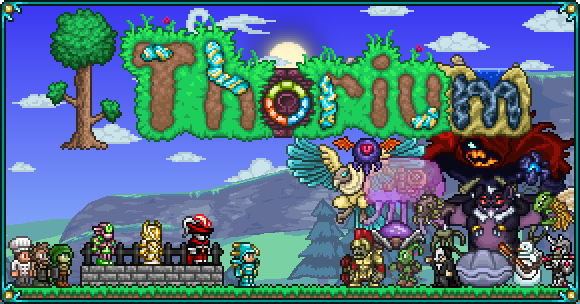 If you are looking for something thoughtful and deep in Terraria then you should go for Thorium. It adds plenty of new stuff and content to the game. This mod includes 2,000 new items, 180 new enemies, 55 new armor sets, 1250 new tiles, and blocks, 11 new bosses, and much more. It also contains three new classes, thrower, bard, and healer. Bard is one of the best classes you can find. Each weapon that is designed for Bard is very impressive. What's more, it has a wide range of stunning places and things to be explored by the players. 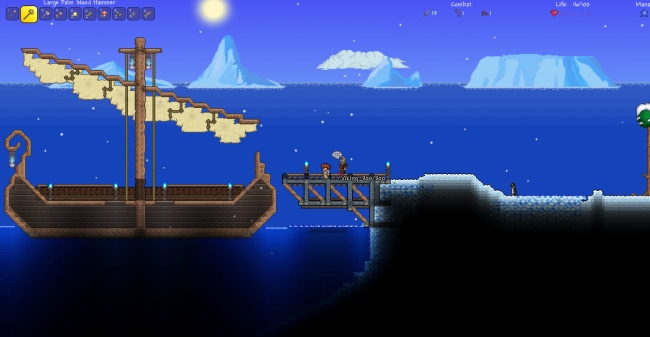 Super Terraria World has been there for a couple of years now. But it continuously being improved by the developers which makes it the most impressive and interesting mod of all times. The mod transforms the game completely into a fully-featured RPG that includes everything one can think of such as special skills, tricky quests, NPCs, and much more. The developer of this mod has recently launched a Patreon to expand the boundaries and features of this mod further. It is one of the ideal and best Terraria mods for those who are looking for something additional in the original version of the game. 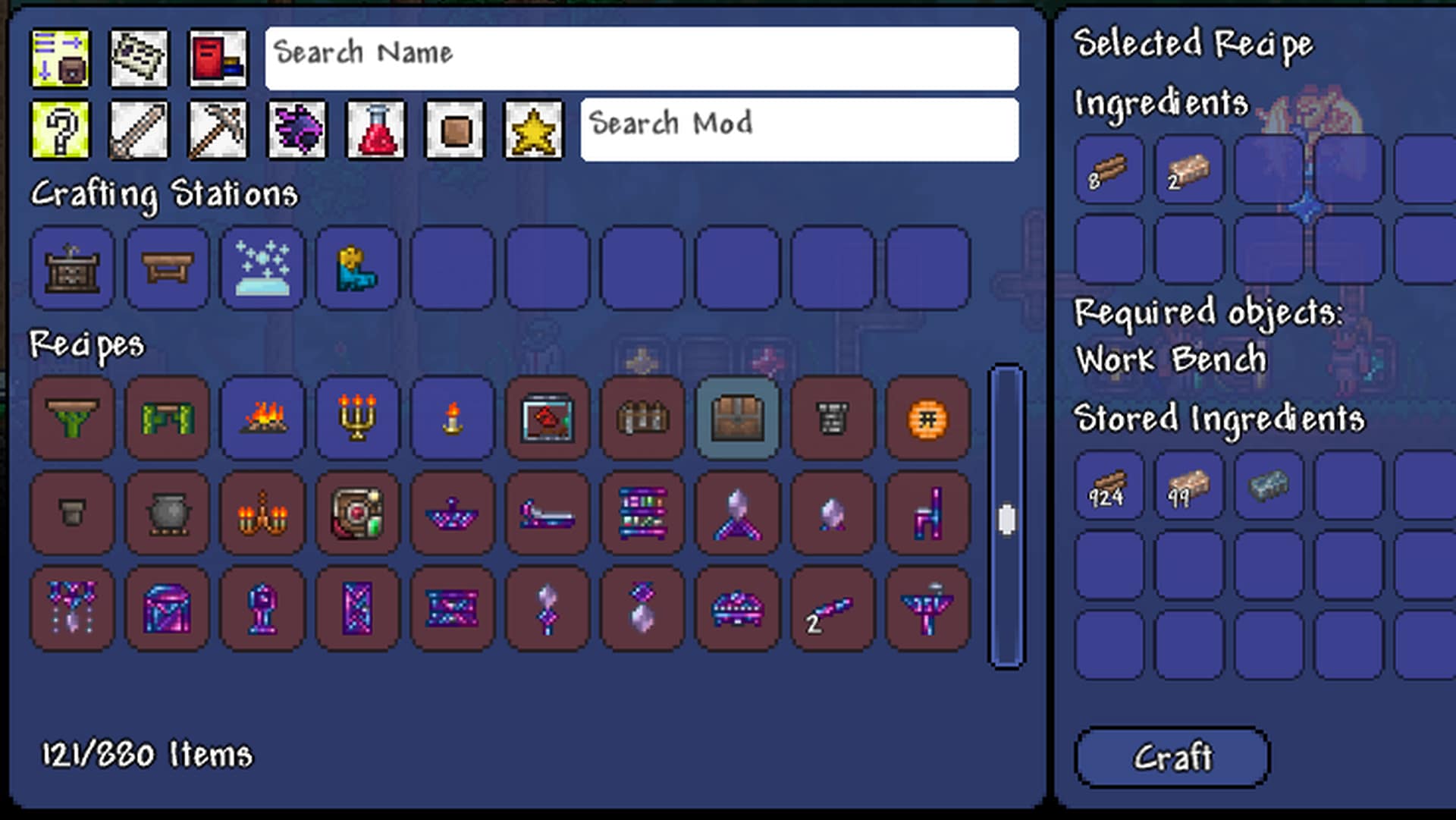 Magic Storage enables the players of Terraria to connect several storage containers together, leading to more expandable and accessible inventory. Apart from collecting things together, it also allows its players to connect crafting stations, enabling them to make things from stored material. It also features a remote access connector that enables its players to obtain crates without being close to them. This mod is one of the most convenient mods of Terraria that will definitely help you a lot to enhance your experience of playing Terraria. 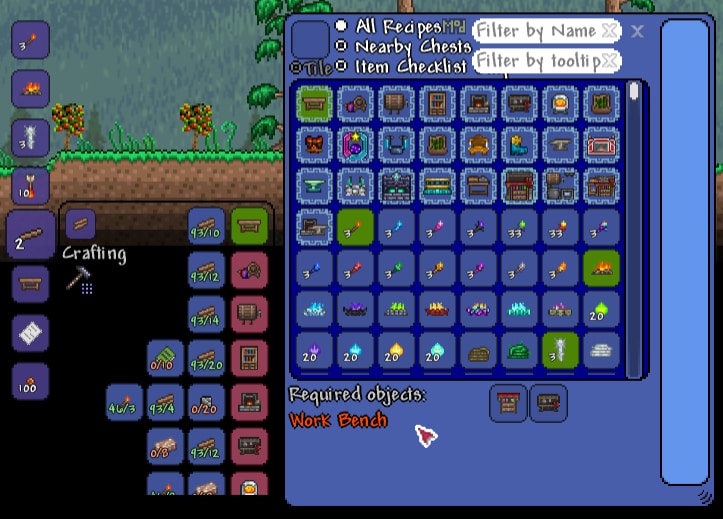 Recipe Browser is another mod that helps you control and access the wild and excessive features of Terraria. Recipe Browser is the best Terraria mod that enables the players to use it in order to know the proper use of items of Terraria and what you can craft using those items and how you can craft. It is very simple and convenient to use. You have to select the item from your inventory and place it in the search box. The add-on will let you know about every possible result that you can craft using that item. It also lets you know about the items that you will need in order to craft something. The developers are continuously adding new features and abilities to this game, such as crafting multi-stage recipes, use of bookmarks, in-game item search, and much more. 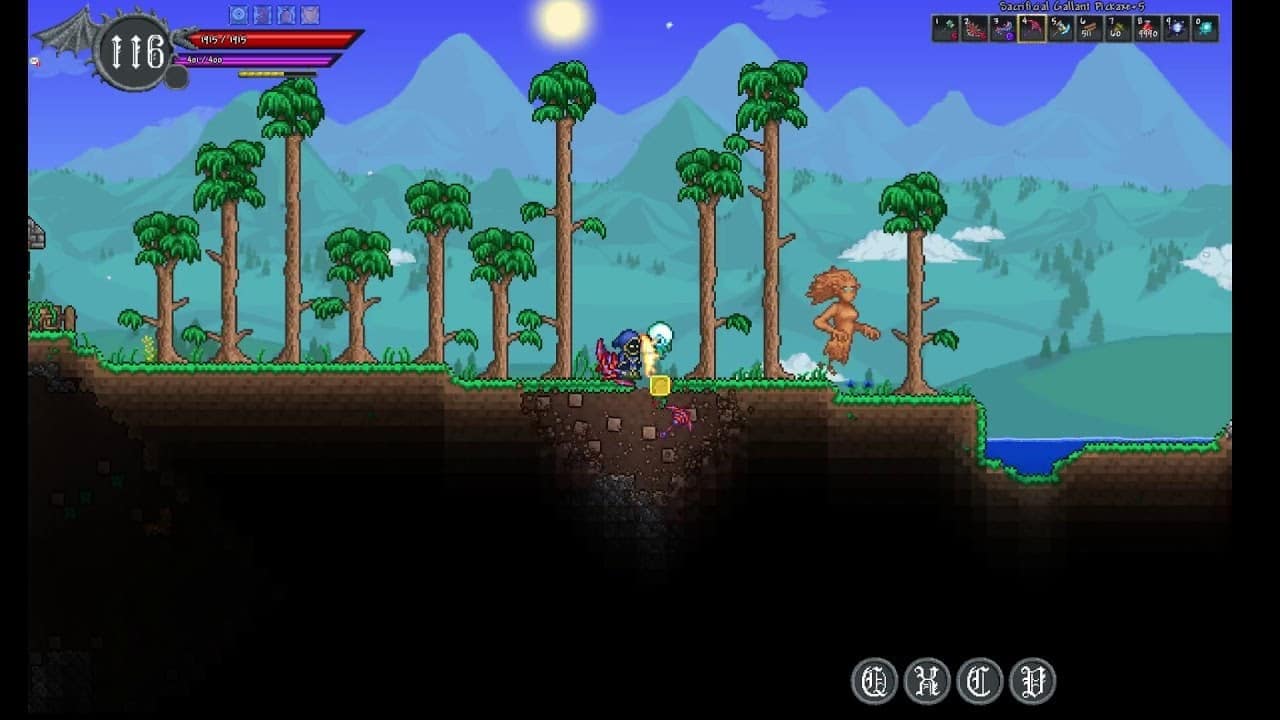 Mining in Terraria using clicks of the mouse can be very painful because you have to destroy each block made up of several bricks. Veinminer can help to reduce your hard work. It is a simple and easy-to-use mod that enables you to destroy the entire vein of bricks just by hitting a chunk of bricks. With a single hit of the vein of bricks, the entire chunk of the similar brick will vanish. It seems like cheating but as you know Terraria is all about clicking and clicking is king. So it will save you a lot of time and effort of clicking each brick of the Terraria. 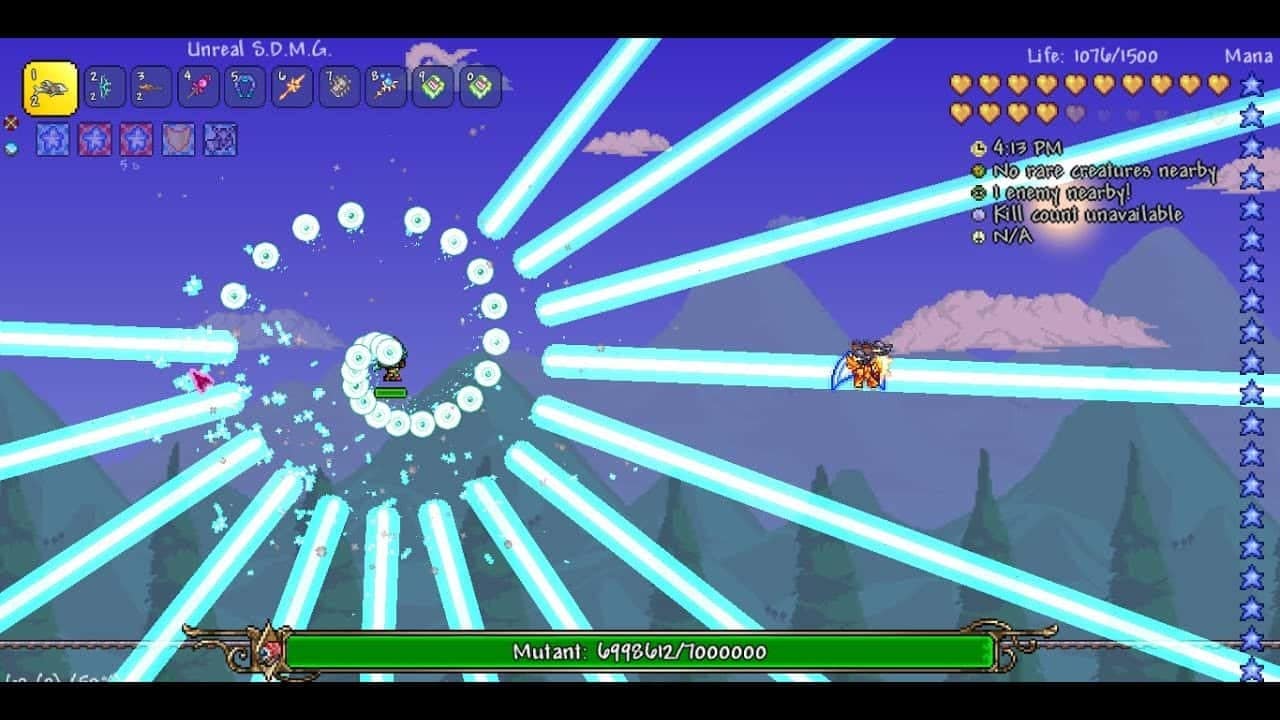 The main focus of this mod is quality of life. This mod includes a wide range of changes, NPCs, Recipes, and weapons in Terraria to take it to another level. Several NPCs are available in this mode to sell you various items to help your progress. The items include wood, lumberjack, simple materials, boss summoning trinkets, and much more. It is fun to access the content that Terraria gate off and enjoy it. This mod allows you to access things that are very difficult to be found in Terraria otherwise. 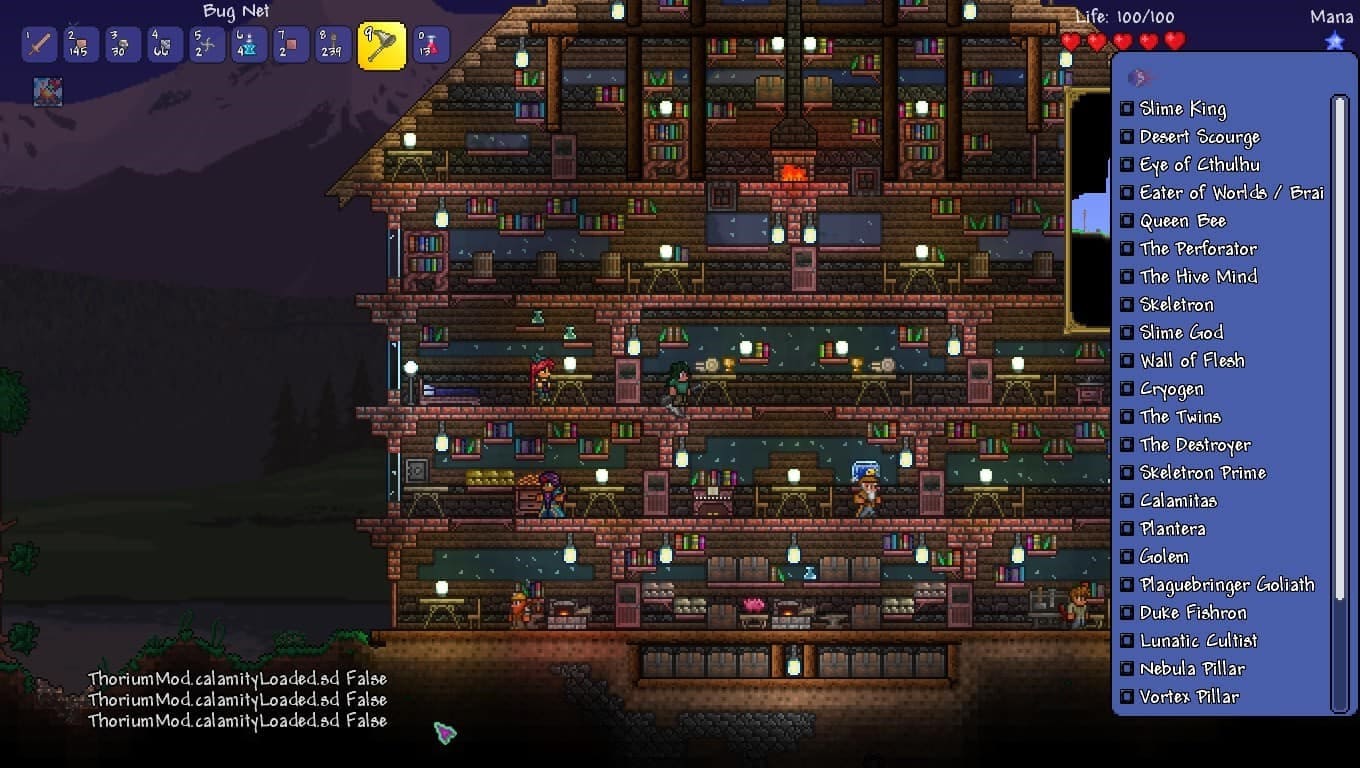 Playing Terraria and adding several mods at a time can be very confusing. Terraria already contains a wide range of bosses, and after adding mods, the number of bosses increases to a very large scale. This will make it hard for you to have in mind what you have accomplished and what you have to accomplish next. This Boss Checklist mod will be beneficial in that case. It will provide you with an in-game list of all the bosses and activities you have achieved and have to achieve. It almost supports all kinds of mods which makes it one of the best Terraria mods. However, if you have added a small mod, it might not support Boss Checklist because it depends upon the permission provided by each mod to Boss Checklist to access the progress.

It is fun to play Terraria but the fun and thrill will be doubled by adding the above mods. Each of the above mods comes with different features and options. You can add all of the above mods at a time but doing that will lead you to confusion and make it difficult for you to play. That's why we have described each of the mods in detail to help you choose the one that best suits your needs and requirements. Indeed, several other mods are available on the internet but I have tried to select only the best Terraria mods for you.